An important announcement: On Friday, I have to undergo an important surgery—which will likely take at least a week of recovery. But I am leaving you in the safe hands of two excellent journalists and very kind friends. Samarth Bansal will be writing the lead in my absence while Piyasree Dasgupta will be editing the edition. And, of course, the amazing splainer team—Rachel, Sara, Nirmal, Aarthi and Vagda—will be holding the fort in my absence. I plan to be back in the saddle around January 30. Try not to miss me too much:)

Recommendations please! Know of a good plus-size brand or shop? We need your suggestions for our next crowd-sourced recommendations list—where we will put together the best plus-size clothing in various categories: formal, casual and party wear. So we need your help—as do your fellow splainer subscribers. Please do the needful with this short form:)

A historic population decline in China

The country’s population has fallen for the very first time in 60 years—dropping by  850,000 in 2022. The birth rate fell from 7.52 per thousand in 2021 to 6.77 last year. As a consequence, China’s population is ageing: people in ages 16 to 59 made up 62% of the national population—down from about 70% a decade ago. That’s a serious concern for China—which has become a global manufacturing hub thanks to cheap labour. Not helping matters: newly released GDP data that shows China recorded zero growth in the fourth quarter of 2022—down from 3.9% in the previous quarter.

Ironically, rising prosperity is the primary reason for the falling birth rate: “Once you have well-qualified, well-educated urban people, they will decide not to produce a lot of kids.” Despite the government’s best efforts, a study found that Chinese people’s desire to have children was among the lowest in the world. (NBC News)

Also delivering bad news: Microsoft—which is getting ready to announce a 5% cut in its workforce around the world. (Sky News)

Russian drama at the Australian Open

Organisers have banned Russian and Belarusian flags at the tournament. The decision was taken after the Ukraine ambassador to Australia tweeted his displeasure at the sight of a Russian flag in a match between a Ukrainian and Russian player.

Earlier, the spectators were allowed to bring flags to the tournament under a condition that they did not cause “disruption.” The Open has a “neutral flag” policy—which allows players from Russia and Belarus to compete under a white flag—unlike Wimbledon which banned them outright. Some Ukrainian players are now calling for a ban on anyone who displays a Russian flag. You can see the flag that pissed off the ambassador below. (BBC News) 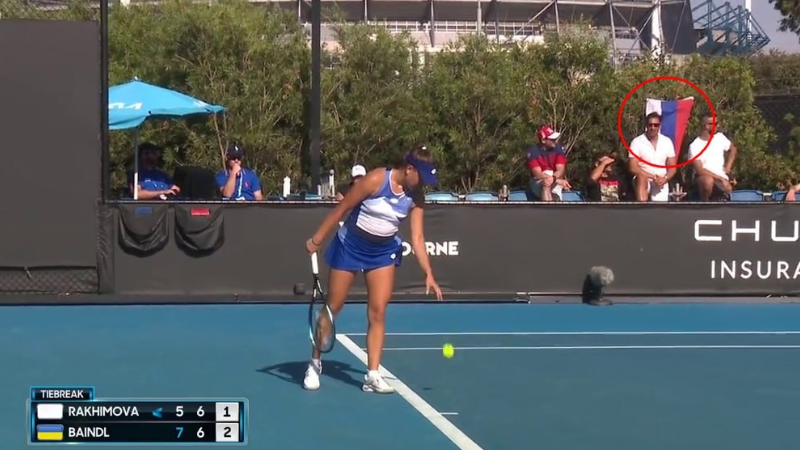 In other news from the Open: Outdoor matches were suspended twice—first due to extreme heat and then again due to heavy rains. (Reuters)

The Ministry of Electronics and IT (MeitY) has released a draft proposal that gives the Press Information Bureau the power to censor what is shared on Twitter, Facebook and YouTube. PIB is essentially the government’s PR agency—but it apparently has a “fact-checking” unit. Any news deemed ‘fake’ by this unit will have to be taken off these platforms. Even internet service providers will have to disable the link to the offending news article.

And it’s not just the PIB:

[C]ontent that has been marked as misleading by “any other agency authorised by the government for fact-checking” or “in respect of any business of the Centre” will not be allowed on online intermediaries.

Indian Express has more on the proposal—and why free speech advocates are sounding the alarm. For more context, check out our Big Story on the new media rules put in place by the government.

We have been enjoying an unusual three-year stretch of La Niña—a global weather pattern that brings cooler temperatures (We explained this here). But its sibling El Niño is due to return this year—and bring scalding hot weather. Scientists warn that global temperatures will rise “off the chart” and we will witness unprecedented heatwaves. And 2024 will be even worse:

This year is already forecast to be hotter than 2022, which global datasets rank as the fifth or sixth hottest year on record. But El Niño occurs during the northern hemisphere winter and its heating effect takes months to be felt, meaning 2024 is much more likely to set a new global temperature record.

There is a chance that we will breach the 1.5°C threshold of warming next year. How likely is this? Weather.com says there is a 24% chance—but The Guardian quotes scientists who say it’s “very likely.”

Protein injections: A new study out of Australia revealed that injections that contain a protein called Tropoelastin can actually undo the damage wreaked by a heart attack. Here’s why this breakthrough matters:

The aftermath of a heart attack results in damaged heart muscle, which, over time, becomes a scar. This scar tissue can cause complications with pumping and transporting blood as it does not have the elasticity and flexibility of a healthy heart muscle and cannot revert to the original.

But the injections help “turn back the clock” in just 28 days. (Interesting Engineering)

Two: New research shows that people who exercise regularly are protected from complications following a Covid infection. And you don’t even have to be a gym junkie to enjoy the benefits:

Three: A new 10-minute CT scan can detect one of the most common causes of high blood pressure—and cure it! The scan lights up tiny growths (nodules) in a hormone gland—which most often causes high blood pressure. Once identified, doctors can then remove these growths:

Some 128 people took part in the study of a new scan after doctors found that their hypertension (high blood pressure) was caused by a steroid hormone, aldosterone. The scan found that in two thirds of patients with increased levels of the hormone, this is coming from a benign growth in just one of the adrenal glands, which can then be safely removed.

The BJP MP from Bangalore inexplicably decided to open one of the emergency exits on an Indigo flight that was getting ready for takeoff from Chennai:

According to eyewitnesses, the cabin crew were briefing the passengers on safety protocol to be followed when the incident happened. Member of Parliament Tejasvi Surya was sitting near one of the emergency exits and he was also briefed about the mandatory emergency procedures. “He was listening to it carefully and minutes after that he pulled the lever resulting in the opening of the emergency exit. Immediately, we were all deplaned and made to sit in a bus,” one passenger said.

This is considered a serious breach of airline safety—and the offender is usually hauled off the plane and booked at the nearest police station. But Surya only had to apologise in writing—and put right back on the aircraft. To add privilege to injury, Indigo is protecting his identity—even though it has been confirmed by eyewitnesses. And the top aviation authority has described the incident as a “mistake.” (The News Minute)

Three artists—a cartoonist, a painter and an illustrator—have filed a class-action lawsuit against three AI art companies claiming copyright violations. The reason: All three have developed popular AI art generators trained on billions of images scraped off the internet—which includes the work of artists. They are used to train the machine without the knowledge or consent of the creators. The companies claim that their AI art tools are protected by the fair use doctrine—but this reasoning has not yet been settled by a court. The plaintiffs are looking for a hefty settlement. Their lawyer said: “Even assum­ing nom­i­nal dam­ages of $1 per image, the value of this mis­ap­pro­pri­a­tion would be roughly $5 bil­lion.” (Ars Technica)

Closer to home: Hansal Mehta’s upcoming film ‘Faraaz’ is facing an unusual legal challenge. The movie tells the story of a 2016 terrorist attack at a Dhaka cafe that resulted in 22 deaths. Two women who lost their daughters have moved the Delhi High Court claiming it violates their privacy. The Court already rejected their previous petition in October—on the grounds that the deceased don’t have privacy rights. But a new two-judge bench took a more lenient view yesterday. One even quoted shayari—urging the filmmakers to talk to the mothers, and screen the film for them. But neither seemed inclined to block the release of the movie. You can see the trailer below. (Indian Express)