ICYMI: Our first Weekend Advisory for 2023 is seriously kickass with a fabulous 48-hour guide to Kochi that’s gonna make you pack your bags asap! Anushree Kaushal is back with her highly popular reading challenge for this year. We have doggies in Indian art thanks to Heritage Lab. And of course our usual course of recommendations—the best club remixes of your fave 80s songs and weekend binge-watching.

For decades, experts have warned that the Uttarakhand town is sinking—and the crisis finally came to a head last week (explained here). The government evacuated 34 families and is now readying to demolish 86 houses that have been deemed unsafe. The first targets, however, are two hotels—which have sparked local resistance. The owner of one is threatening to burn himself if he doesn’t receive generous compensation. Homeowners, OTOH, are worried about being abandoned and homeless once the media moves on. (The Hindu)

The World Bank’s growth forecast for the global economy this year has been cut nearly in half—dropping from 3% in June to 1.7%: “That would mark the third-weakest pace of global growth in nearly three decades, overshadowed only by the 2009 and 2020 downturns.” The projected growth rate barely keeps the world out of recession territory. FYI: the global economy is considered to be in recession if its economic growth is slower than its population growth. It’s rare since the growth rates of China and emerging markets like India are typically high. The bank also warned that aggressive measures to curb inflation—like high interest rates—could slow growth across the world. (Wall Street Journal, paywall, Al Jazeera)

A Golden Globe win for ‘RRR’

The film was nominated in two categories—and just won the top award for ‘Best Original Song’ for ‘Naatu Naatu’. It beat out the likes of Taylor Swift, Lady Gaga and Rihanna. Sadly, ‘RRR’ lost out in the ‘Best Foreign Film’ category to ‘Argentina, 1985’. See the winning moment below. (Indian Express)

Also heartwarming: Jr NTR was mobbed by fans at the screening of ‘RRR’ at the iconic Chinese Theatre in Los Angeles—just a day before the Golden Globes. (NDTV)

PS: Y’know what was even more awesome? These wild scenes during the screening.

The AI-driven tool made a big splash around the world for its impressive ability to replicate human writing in a conversational style (explained in this Big Story). And now Microsoft is in talks to buy its creator OpenAI—possibly at a valuation of $29 billion. The company is looking at integrating ChatGPT into its search engine Bing—as a rival to Google:

The bot is capable of responding to queries in a natural and humanlike manner, carrying on a conversation and answering follow-up questions, unlike the basic set of links that a Google search provides.

We’d be happy with anything that rescues us from the ad-cluttered futility of Google search. (Mint)

The American Academy of Pediatrics (AAP) has released a new set of guidelines for paediatricians advising them to “offer treatment options early and at the highest available intensity." It recommends “intensive therapy” for young children and weight loss drugs for kids aged 12 and above. AAP also says that teens 13 and older with severe obesity should be “evaluated for weight loss surgery.”

This is a remarkable break from previous guidelines that emphasised "watchful waiting”—which delayed treatment to see if children outgrow obesity. While doctors advocate a holistic approach to obesity, they say that advocating a healthy diet and exercise isn’t always realistic for low-income parents. And new meds that target hormones may offer greater hope. FYI: obesity is defined by a person’s body mass index—which may not reflect the state of a person’s health. (NBC News)

Excellent news about the ozone layer

In the 1980s, everyone became alarmed about the depletion in the ozone layer that protects our planet from harmful radiation. Every year, “ozone holes”—or regions of greater depletion—appear regularly near the South Pole and often near the North Pole. So in 1989, countries came together to sign the landmark Montreal Protocol—which banned harmful chlorofluorocarbons. More than 100 ozone-depleting compounds were eventually banned and phased out. And years of self-restraint have finally borne fruit. According to the United Nations, the ozone layer will entirely heal itself by 2045.

Ozone action sets a precedent for climate action. Our success in phasing out ozone-eating chemicals shows us what can and must be done — as a matter of urgency — to transition away from fossil fuels, reduce greenhouse gases and so limit temperature increase.

The first-ever attempt to launch satellites from UK soil has ended in failure. The mission aimed to launch nine satellites into space, but ended in “technical failure”:

A jumbo jet operated by the American Virgin Orbit company carried a rocket out of Newquay, Cornwall, to release it high over the Atlantic Ocean. The rocket ignited and appeared to be ascending correctly. But word then came from the company that the rocket had suffered an "anomaly". The satellites it was carrying could not be released and were lost.

The carrier jet returned safely to the surface. BBC News explains why this is a big blow for the UK’s space program. Also: this is how excited the Brits were about the launch:

A GoFirst plane out of Bangalore merrily took off—leaving 54 of its passengers stranded in a bus on the tarmac. They were put on another flight to Delhi four hours later—when they finally caught up with their luggage at Delhi airport. (Times of India)

Say hello to your AI lawyer

A US startup has unveiled an AI-powered robot that will be the first to represent a defendant contesting a speeding ticket in court. No, the robot will not be making grand speeches in court:

[T]he company's AI-creation runs on a smartphone, listens to court arguments and formulates responses for the defendant. The AI lawyer tells the defendant what to say in real-time, through headphones.

Since this is a test case, the company will cover any costs if the defendant loses. According to DoNotPay, their robot has already helped its customers win more than two million customer service disputes. But replicating that success inside a courtroom may be tricky. The reason: lots of them don’t allow bluetooth enabled hearing devices—and others require lawyers who have professional licences. (CBS News)

One: The trailer for SRK’s ‘Pathaan’ is finally here—and it is packed with slick VFX action scenes. There isn’t a hint of saffron anywhere to be seen, thank god! We can't wait to check it out on January 25—when it hits theatres. Shah Rukh is way overdue for a decent movie, right?

Two: Great art has unfortunately become the target of political ire these days. Everyone was upset at climate activists who threw pies at paintings in galleries—to little lasting effect. But their vandalism isn’t a patch on the damage wrought by Jair Bolsonaro’s supporters—who stabbed holes into fine Brazilian art while rioting on Sunday (explained in our Big Story yesterday). (ArtNet) 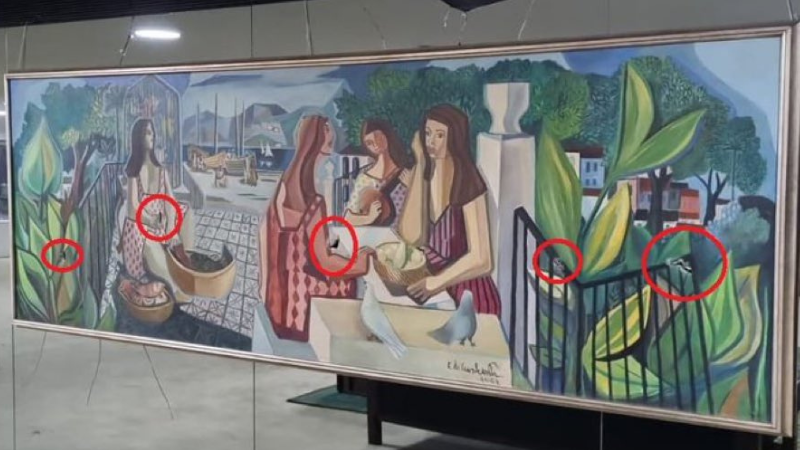