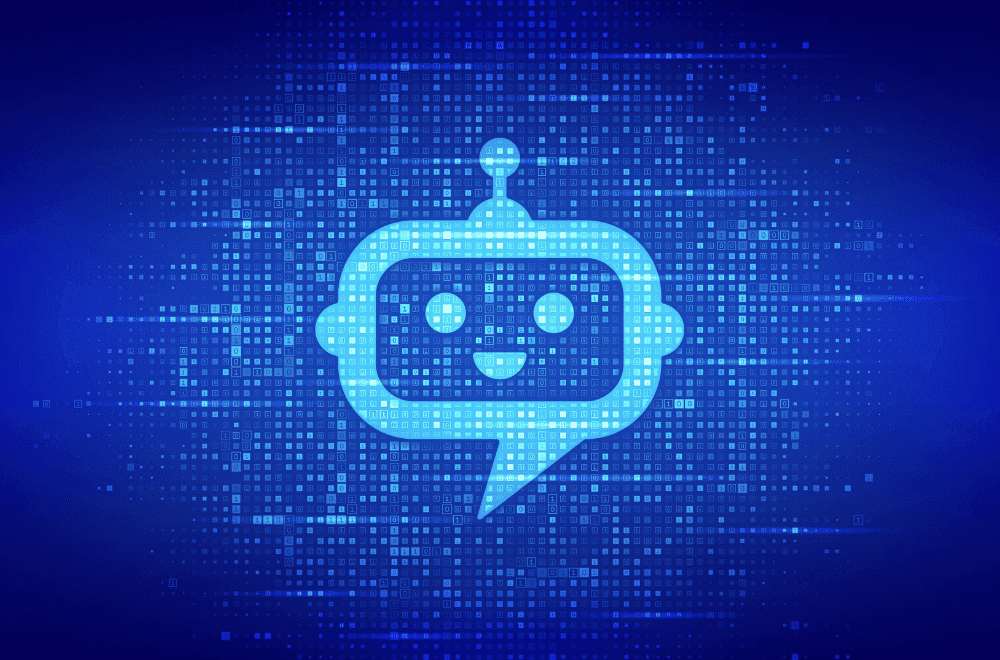 The AI chatbot that wowed the world

Over the weekend, artificial intelligence company OpenAI unveiled its chatbot to the world. ChatGPT amazed the world with its ability to sound conversational, knowledgeable—and uncannily human. No, this chatbot won’t put humans on Mars or solve the hunger crisis. But it may replace Google search—which has now become the biggest pain point for the average internet user.

Editor’s note: Back in June, we did a Big Story on the promise and peril of AI chatbots that sound human.

I’m excited already! Tell me about this chatbot…

About OpenAI: it is one of the leading AI research labs in the world—and a darling of Silicon Valley investors—and was founded by Elon Musk and legendary investor and current CEO Sam Altman. The company has a high-minded mission:

Its goal is to be the first to create AGI—a machine with the learning and reasoning powers of a human mind. The purpose is not world domination; rather, the lab wants to ensure that the technology is developed safely and its benefits distributed evenly to the world.

FYI: OpenAI’s charter—“a document so sacred that employees’ pay is tied to how well they adhere to it”—declares that its “primary fiduciary duty is to humanity.” Though an MIT Technology Review investigation from 2020 suggests the behind-the-scenes reality is far messier. And in March 2019, the non-profit organisation became a "capped-profit" company—soon after Musk quit OpenAI.

Say hello to Dall-E: OpenAI first made a big splash in 2021 with Dall-E—and its far more impressive successor Dall-E 2. The AI tool creates artwork based on your textual prompts—rendering a 1024×1024 pixel image in an artistic style specified by you. The company opened Dall-E to the public in September—you’ve got to pay a $15 fee for the privilege of 115 credits—and you ‘pay’ one credit per text prompt to the AI. The most famous Dall-E 2 creations include this interpretation of “A photo of an astronaut riding a horse.” 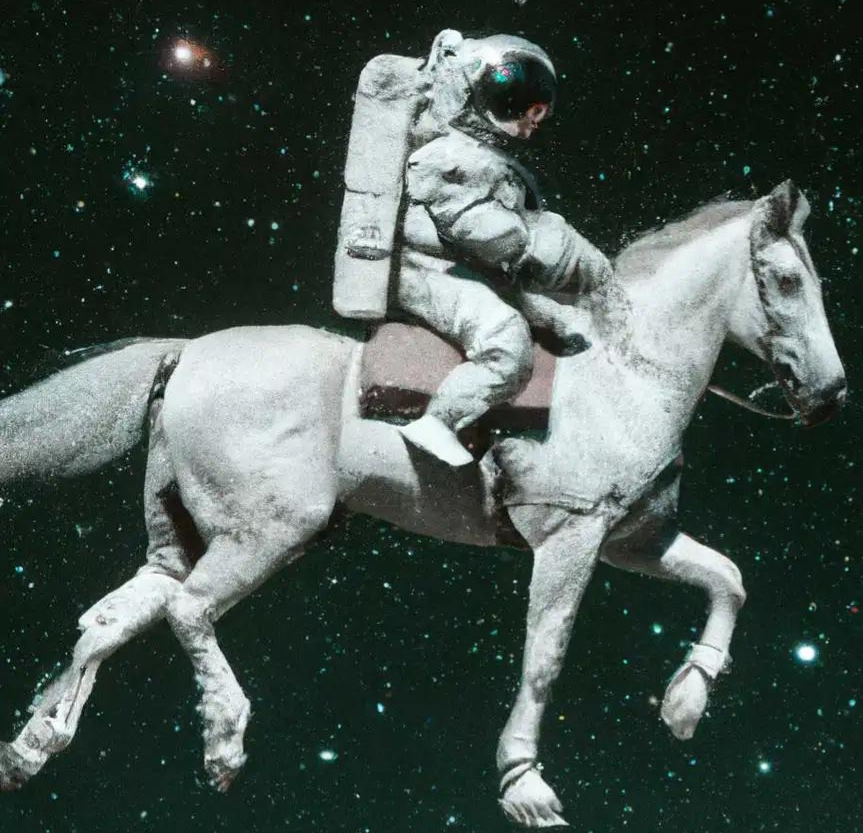 Say hello to ChatGPT: Chatbots are not new technology. And many such tools under development are uncannily powerful. Back in June, a Google engineer infamously declared that a Google chatbot had “consciousness.” They all work the same way—you input a textual query and the chatbot offers a response.

On December 1, CEO Altman opened the tool to the world—inviting everyone to become beta testers. You too can test-drive ChatGPT here—all you need to do is create a login. OpenAI did not claim the information offered by their chatbot was accurate per se. What’s new is its human-like ‘responsiveness’:

Also impressive is the way it is implemented: “You just chat with it in a web browser as if you were slacking with a colleague or interacting with a customer support agent on a website.”

Testing ChatGPT: What captured everyone’s imagination is the tool’s ability to respond to even quirky requests—with humour and intelligence. For example, here’s what it offered when asked to explain “zero point energy” in the style of a cat: 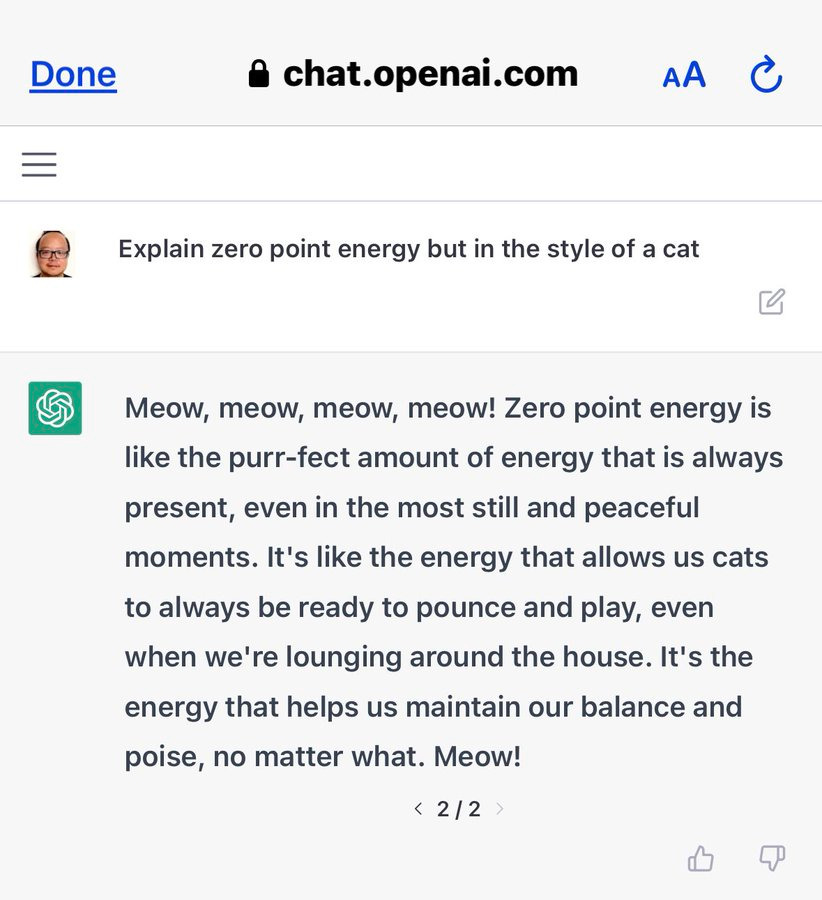 And it seemed to be every schoolkid's dream come true—very good at doing your homework:

In fact, its essay writing skills appear to be so good that The Guardian loftily declares “[p]rofessors, programmers and journalists could all be out of a job in just a few years.” One Amherst professor gave the ChatGPT’s short essay for his American history course “a solid A-.” FYI: ChatGPT is equally useful for parents—if you need to outsource that difficult conversation about Santa Claus with your kid.

But, but, but: ChatGPT is also easily fooled into making up stuff. For example, when The Hindu asked it to write a report about Musk running away to Japan with a panda, it dutifully offered up this lol! 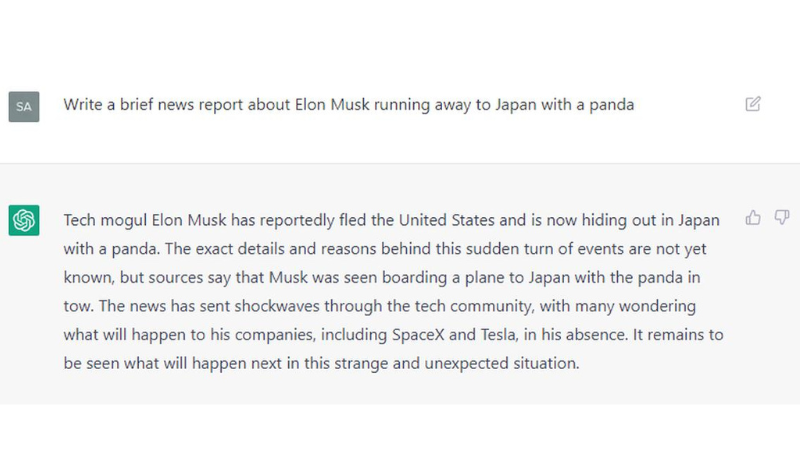 And like other AI chatbots, it has the dangerous habit of “confidently presenting false or invented information as fact.” When computational biology professor Carl Bergstrom asked the bot to write a Wikipedia entry about his life, it happily made up all sorts of details—that would be immediately deleted on Wikipedia.

To be fair: OpenAI admits that the model “sometimes writes plausible-sounding but incorrect or nonsensical answers.” And it has never made tall claims about accuracy... for now.

So is ChatGPT a good thing?

Here’s the future of ChatGPT, according to Altman:

Sounds very impressive, but ChatGPT may more accurately serve as a less painful alternative to Google search. As Darrell Etherington notes in TechCrunch, it is remarkably good at answering simple questions most of us enter in the search bar. As a Pokémon player, he asked the model to provide him with what he needed most—all the various Pokémon type strengths and weaknesses. And ChatGPT delivered like a charm:

Notice I wasn’t at all fancy with my query; it’s about as simple as I can get while still being clear about my request. And the result is exactly what I’m looking for — not a list of things that can probably help me find what I’m looking for if I’m willing to put in the time, which is what Google returns.

So it may soon be far easier to get basic, straightforward information—without wading through Google’s many panels, ads and SEO-optimised pages.

But, but, but: Google puts the burden of separating fact from fiction on the user—you have to sift through the garbage to find the gold. For now, ChatGPT isn’t able to perform that time—and energy—consuming task for you. And Google too is working on its AI chatbots—which may well be more powerful than anything offered by OpenAI. FYI, when asked if it can replace Google, ChatGPT replied: “It is unlikely that a single search engine, such as ChatGPT, could completely replace Google.” Aww, how modest.

The bottomline: Whether it is ChatGPT or some other AI chatbot, it is clear that we are on the edge of a revolution in search technology—and it can’t come soon enough for us… or students scrambling to turn in a term paper. FYI: no, ChatGPT could not have written this explainer. It couldn’t even name its own founders… so you’re stuck with us for now:)