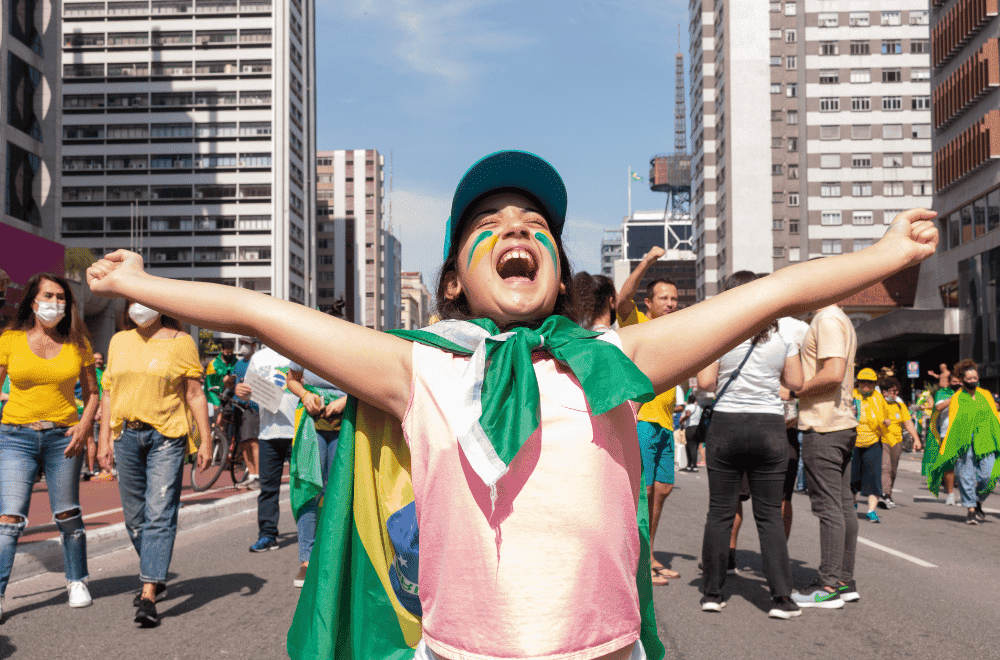 Thousands of rioters invaded the Supreme Court, parliament and the presidential palace—demanding a military coup to reinstate former president Jair Bolsonaro. It was an eerie replay of the Capitol Hill violence in the United States—almost exactly two years ago.

Editor’s note: Some of our lead stories are shorter than others because the material doesn’t demand extended explanation. This is one of them—more so as we covered the background in this Big Story on the Brazilian election.

A refresher on the Brazil elections

Meet Jair Bolsonaro: He is one of the most notorious strongmen in the world. Bolsonaro is best known for his abuse of human rights, disastrous Covid-denying policies and—above all—the wanton destruction of the Amazon rainforests. During almost four years of his rule, Bolsonaro was wildly popular with rightwing Christians and wealthy landowners—who had free rein under his rule.

Meet Luiz Inácio Lula da Silva: The leftist former president is the polar opposite of Bolsonaro. He ran on a platform championing the environment and poor farmers—promising a return to the economic prosperity that marked his first term from 2003–2010.

The outcome: Lula beat Bolsonaro in a tightly contested election—winning 50.9% of the vote. His narrow victory revealed a bitterly divided Brazil, and the strength of Bolsonaro’s support.

The ‘stolen election’ narrative: Throughout his campaign, Bolsonaro attacked Brazil’s electronic voting system—implying that the election could be rigged. More worrying: even the military made similar noises about election integrity—raising fears of a military-backed coup. While Bolsonaro had warned that he would only leave office if he was “killed, jailed, or victorious,” he seemed to have accepted the election results—though he never officially conceded. FYI: in a pre-election poll, three out of four of his supporters said they have little or no trust in Brazil's voting machines.

The buildup to January 8

Here’s a quick timeline of how this particular pot came to a boil:

Thousands of Bolsonaro supporters stormed the Palácio do Planalto (presidential palace), the Congress and the Supreme Court in Brasilia on Sunday. Many of them were already camped out in the capital for months—while others were brought in on 40 buses. Below is a glimpse of the anarchy that ruled the heart of Brazilian democracy for around five hours.

Here are supporters storming the Congress:

The inside of the presidential palace looked like this: 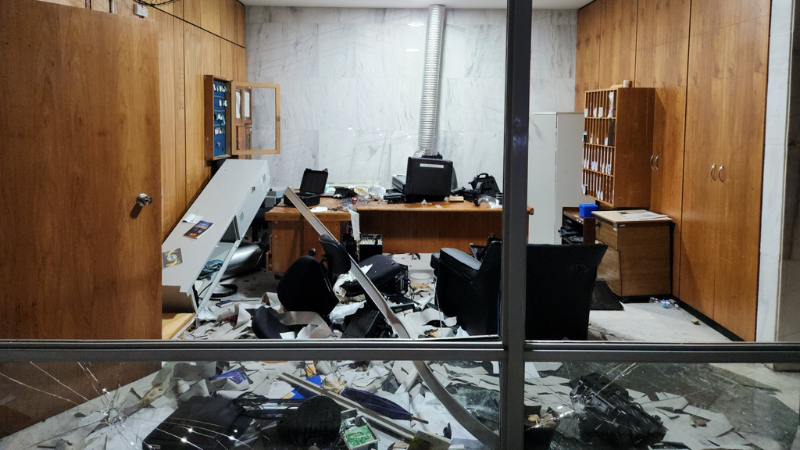 But there was just as much chaos outside on the streets—where rioters set fire to Congressional Police vehicles:

Meet the ‘Bolsonaristas’: Bolsonaro’s hardcore supporters are nationalist, socially conservative and often evangelical Christians. They view Lula as a ‘communist’ who threatens family values and capitalism. The raging mob had wealthy and powerful patrons—who fear the rise of Lula:

Protests have been taking place for weeks, and there are big funders of the demonstrations, such as large landowners and business groups who helped pay for the busing in of thousands of Bolsonaro supporters to the capital, Brasilia.

The Bolsonaristas uniform: Their nationalism is literally worn on their sleeve—in the yellow and green shirts reflecting the colours of the flag. Also popular: the national team’s football jersey which has been appropriated as an emblem of the far-right. You can see one of them wearing Ronaldinho’s jersey below: 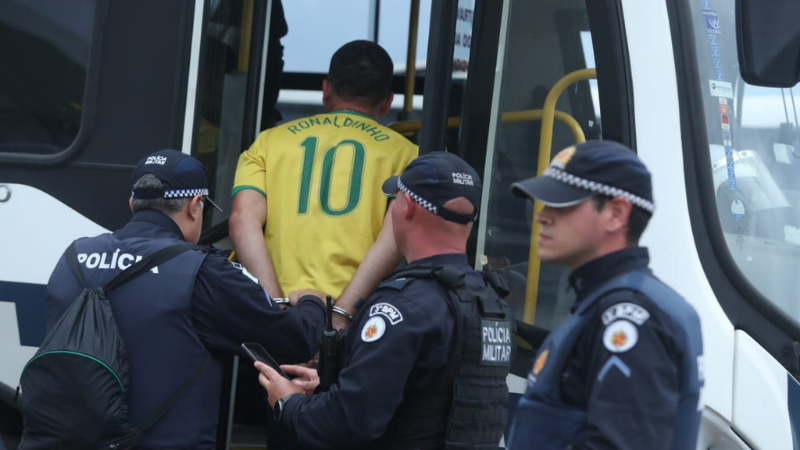 The fallout: The siege lasted five hours—until security forces wrested back control of the buildings. Since then, 300 people have been arrested—and President Lula has announced a federal emergency. The capital was shut down for 24 hours.

The aftermath: the big questions

What was Bolsonaro’s role? The former president was far away from the scene of the crime. He has taken up temporary residence in Florida—and was recently admitted to the hospital for abdominal pain. There is no evidence that he orchestrated the riots—nor do his fiercest critics (including Lula) accuse him of the same. At the time of his defeat, he appeared to tell his supporters to move on: “We live in a democracy or we don’t. No one wants an adventure.” And yesterday, he criticised the rioters, saying they had “crossed the line.”

But, but, but: It is precisely the absence of a mastermind that makes these kinds of populist riots more dangerous:

Unlike other attempts to topple governments across Latin America’s history, the attacks on Sunday were not ordered by a single strongman ruler or a military bent on seizing power, but rather were fueled by a more insidious, deeply rooted threat: mass delusion.

These Bolsonaro supporters are so deluded that they now claim the riots were staged by left-wing groups to make them look bad. Every event spawns its own conspiracy theory. More importantly, these riots aren’t just about Bolsonaro:

Interviews with protesters in recent weeks appeared to show that Mr. Bolsonaro’s movement was moving beyond him. It is now driven by deeply held beliefs among many right-wing Brazilians that political elites rigged the vote to install as president Luiz Inácio Lula da Silva, whom they regard as a communist who will turn Brazil into an authoritarian state like Venezuela.

Are these Trump copycats? The Atlantic argues that the riots were a deliberate attempt to “create a visual echo of what happened in Washington.” Unlike the Capitol Hill riots—aimed at disrupting the congressional vote to certify Joe Biden’s election—this violence didn’t have any pressing agenda other than to mirror its US counterpart: “Instead, the rioters seemed almost to be cosplaying American insurrectionists.”

Bolsonaro also has “self-consciously modelled” himself on Trump—using a lot of the same rhetoric. And his supporters have been quick to draw parallels between the two. In fact, some experts claim Bolsonaro owes his political career to Trump:

But, but, but: What makes Bolsonaro more dangerous is the role of the military in Brazil—which has spent over two decades under a junta. And none of the Trump supporters explicitly called for a coup. Most importantly, the US military has never spoken out in support of Trump—unlike the generals in Brazil who thrived under Bolsonaro’s patronage. And the tacit support from the police was evident in the lack of any resistance to the rioters:

Lula faces ranks of police who remain tacit backers of Bolsonaro, who encouraged heavy-handed police tactics during his tenure and stocked their senior ranks with loyalists. A sector of the police was accused during the election of setting up checkpoints in Lula strongholds to slow access to ballot boxes.

You can see police officers just chilling with the rioters below:

The bottomline: It remains to be seen as to whether the riots will embolden the right—or offer an opportunity for Lula to unite Brazilians around the ideal of democracy.

New York Times has the latest details of the riots—and this excellent feature that collates all the images/videos of the violence. Washington Post has a more detailed version of events. Quartz has more on the appropriation of the national football jersey. The Atlantic draws the strongest parallels to the Capitol Hill riots.