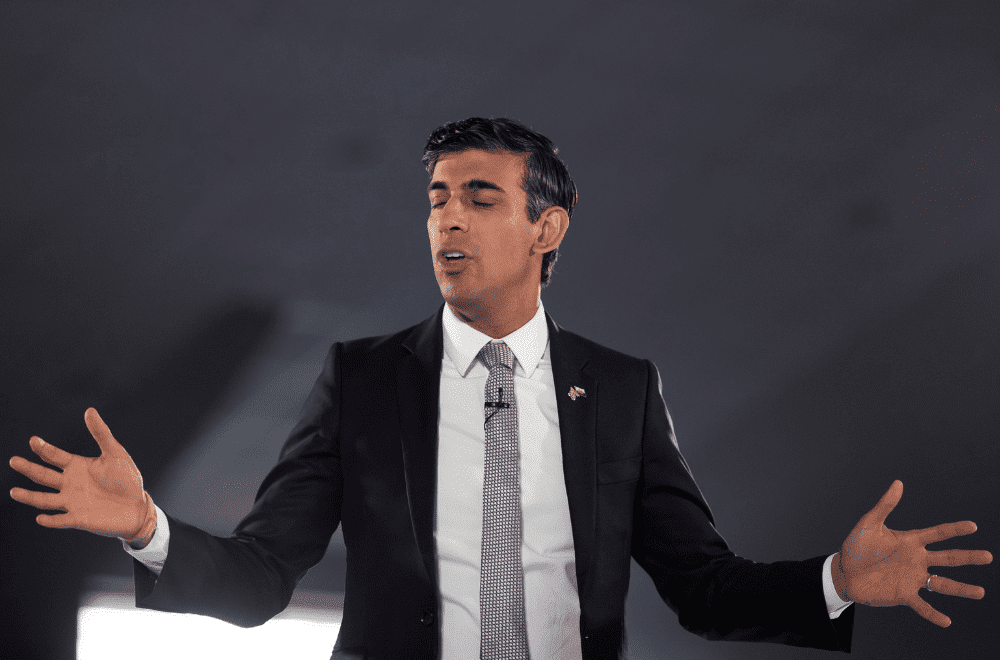 The brown man’s burden: The anointment of Rishi Sunak

When aapro Rishi became prime minister of the UK, the Brits were relieved and Indians ecstatic. The most subdued of the lot: Sunak himself—as he realises that he has now been tasked with the herculean chore of resuscitating both, the nation’s economy and his battered party.


Editor’s note: We have spilt way too much ink on Sunak’s background—and his fabulously wealthy wife, Akshata Murthy—in multiple Big Stories. This one has the most details if you wanna know all about the Rish.

When Barack Obama became president in 2008, the US media couldn’t shut up about the historic moment—and what it signified for the nation's racist history. But the UK coverage of Sunak’s ascendance has almost wilfully underplayed his skin colour. He was variously described as the first South Asian or Hindu to become PM—but few were willing to dwell on the plain fact that he was also the first leader who wasn’t, umm, white.

In fact, one of his ardent supporters, Grant Shapps—unsurprisingly a white, middle aged Tory—declared his ethnicity mostly irrelevant:

“His appointment ‘would be a moment for the country’, he told BBC Radio 4’s Today programme. ‘But in other ways it is unremarkable, little commented on, and that is one of the great things about the United Kingdom – that we are able to get along. I can imagine in other countries, that would be the only and the leading coverage. Here it’s an afterthought, and isn’t that great?’”

In fact, there was more chatter about Sunak’s immense wealth than the fact that he is a person of colour. Yes, he is also the richest UK PM in history—and the youngest in 200 years.

But, he is Indian right? Sorta. His father was born in Kenya and his mother in Tanzania. They separately moved to the UK in the 1960s—eventually meeting in Southampton, where they married. In fact, if you concede the fact that his grandparents emigrated to Africa from Gujranwala—the Sunaks may, in fact, be Pakistani. As some Pakistanis pointed out on Twitter: “Since Gujranwala is in Pakistan, anyone who belonged to this city even 100 years ago is a Pakistani today.” See? The same logic applies.

Something to see: Since it is inarguable that the man is of Punjabi origin, here’s the perfect meme we can all agree on:

But he is Hindu, right? That he most certainly is—and Sunak wears his faith on his sleeve. He swore his oath as an MP on the Bhagavad Gita—and was raised in a devout family. As a child, Sunak went to Bal Vikas classes at the local temple in Southampton—where his father is a trustee. See little Rishi below: 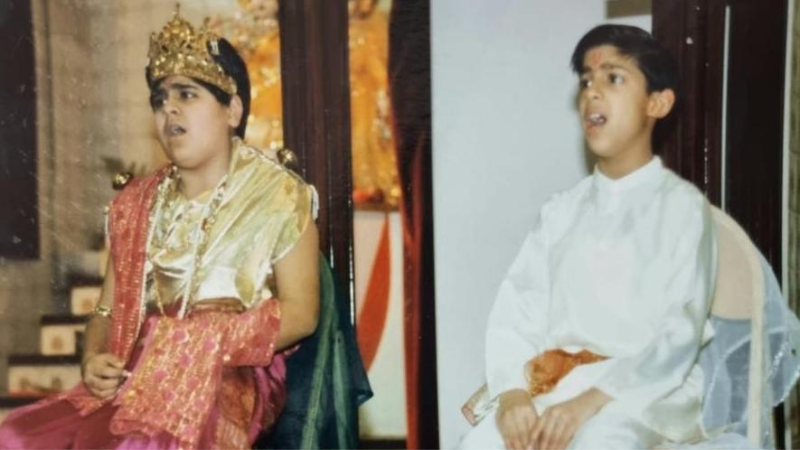 Even today, Sunak regularly goes to the temple, does not eat beef and wears a red mouli thread on his wrist—all of which led some parts of the Indian media to celebrate him as a “proud Hindu.” That kind of talk led some like pop singer Alisha Chinai to get a little carried away:

But he will be nicer to India, right? Maybe the question should be: will New Delhi be nicer to him? PM Modi tweeted:

“As you become UK PM, I look forward to working closely together on global issues and implementing Roadmap 2030. Special Diwali wishes to the 'living bridge' of UK Indians, as we transform our historic ties into a modern partnership.”

That roadmap for UK-India relations includes a “high ambition” free trade agreement—aimed at doubling bilateral trade to $100 billion by 2030. A significant part of the agreement would open up the Indian market to UK companies in exchange for looser immigration rules.

But, but, but: Negotiations went off the rails under Liz Truss—when her Home Secretary Suella Braverman warned: “I do have some reservations [about the pact]. Look at migration in this country — the largest group of people who overstay are Indian migrants.” New Delhi was “shocked and disappointed” by her “disrespectful” remarks. Braverman resigned soon after—though for revealing confidential information in a private email. But guess who is back in her old job? Good old Suella!

It signals that Sunak will embrace the rightwing Tory line on immigration. And any concessions to India may be especially hazardous for him, some experts argue:

“In any trade deal, you win some, lose some. However, with [an] Indian origin PM in the UK, accusing fingers would be pointed from both sides by different sectoral players who would be losing out because of the deal.”

Another commentator predicts Sunak "will want a free trade agreement with India but it won't be at the cost of significantly changing Britain's immigration policy. Mr Sunak will place British interests first, and hence the mood will sour."

Now that he has the top job, Sunak has to somehow find a way to actually do it. We won’t wade into the intricacies of UK politics and policy. Suffice to say that he faces two key challenges.

A uniter, not a divider: The Conservative party has become a snake pit of competing egos and rivalries—bitterly divided between the hard right Boris Johnson supporters and the other somewhat saner Tories. Liz Truss won the leadership contest against Sunak back in September precisely because the BoJo posse couldn’t forgive him for “betraying” his old boss—and shoving him out of office.

While Sunak sailed into his job, thanks to the overwhelming support from Tory MPs, his naysayers are already complaining that rank-and-file members never got a chance to vote—and hence he doesn’t have a “democratic mandate.” The longer it takes Sunak to turn the party’s abysmal poll ratings around, the louder that kind of grumbling is likely to get. Sunak needs a unified party to get anything done:

“While the Tories have a solid majority on paper, the parliamentary party is now so fractious that any one of a number of increasingly well-organised caucuses could hold government business to ransom.”

Key quote to note: Maintaining that unity may keep Sunak firmly on the right side of the party—literally. On the campaign trail in the contest against Truss, Sunak took a fierce anti-immigration line—and also declared: “I want to take on this lefty woke culture that seems to want to cancel our history, our values and our women.” Yes, Rishi thinks women can be cancelled.

But, but, but: Sunak does wield one very big stick to keep the Tories in line: the threat of an election. If he calls for a snap poll, the party will be decimated—given the Tories are trailing the Labour Party by margins of over 30 points in the polls. It may persuade even the most hardcore haters to heed the warning Sunak delivered in his very first speech as leader to the party: We must “unite or die.”

It’s the economy, stupid: Cranky Tories, however, will be far easier to wrangle than the UK economy—which is caught in a spiral of rising inflation and low growth. Outgoing Truss has already junked her wacky mini budget filled with tax cuts for the rich—which would have ballooned the deficit. But Sunak still has to fill a £40 billion black hole in the nation’s budget. And that means he has to embrace the least politically popular measure: spending cuts. He also has to slash just as public services are under incredible strain—and unions are threatening strikes over pay. That moment of reckoning will come within a week when his Chancellor of the Exchequer unveils the government’s fiscal plan.

Not helping matters: Sunak’s personal wealth. It makes him far more vulnerable to attack than other PMs. Scaling back energy subsidies as winter approaches is not a good look when you’re wandering around in Prada shoes. Yes, it is unfair to pick on Sunak when previous white PMs were just as privileged (if less wealthy). But he has often made a PR hash of managing questions about his wealth. In one video, Sunak was caught boasting that he took public money out of “deprived urban areas” to help wealthy towns.

But the most telling was the cringe moment—when he theatrically filled a Red Kia at a petrol pump as part of a PR stunt. The cheap car was borrowed from an employee at the Sainsbury’s service station. Worse, he also couldn’t figure out how to use his card to pay for a can of Coke at the same station:

What certainly won’t help: Sunak’s glaring lack of charisma. His first speech to the nation resembled a scene from ‘I Robot’. He didn’t make any eye contact with the camera—and in the end, looked like someone had taken out the plug (full clip here):

The bottomline: All said and done, we are inclined to agree with Zachary Seward over at Quartz—though we’d use politer language:)—who writes:

“But the UK’s routine convulsions since its Brexit vote in 2016 should ultimately be seen as the domestic squabbles of an entrenched plutocracy over the scraps of a stagnant economy that is now, largely by its own choice, of declining relevance to the rest of the world, but still incredibly gifted at comedy.”

The Guardian is best on the political challenges facing Sunak—see here and here. The Economist (login required) offers a good overview of the challenges facing Sunak—or you can read the Indian Express’ take on the problem of the economy. Washington Post has more on the spotlight on his personal wealth. The Guardian has an excellent round-up of Sunak’s worst political gaffes. BBC News has more on his likely policies. Also in BBC News: Soutik Biswas on the celebrations in India. The Guardian offers a UK-focused report on reactions to Sunak’s South Asian identity.