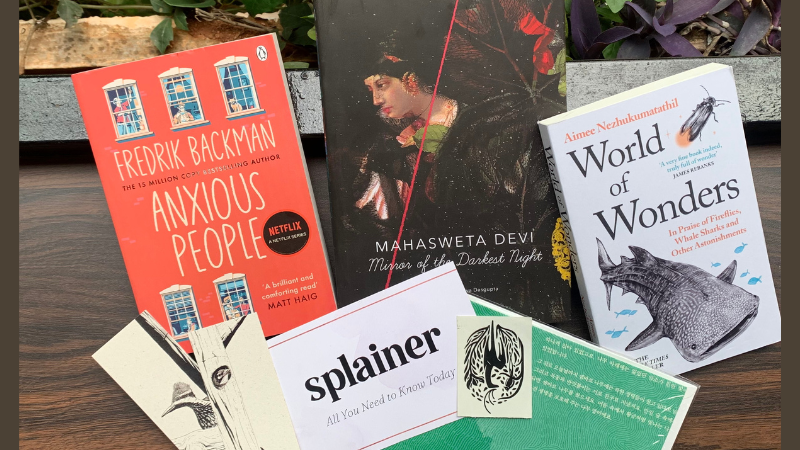 The big bonus: The box comes with a quarterly gift subscription worth Rs 900. You also get two specially-illustrated Champaca bookmarks—so you can keep track of your reading in style;)

By the end of the Communist Party’s big fat meeting on Sunday, Xi had been reappointed for a historic third term—which sealed his absolute control over the country. The powerful politburo is now filled entirely with his loyalists—and Taiwan hawks. According to observers, there is every sign that Beijing is moving towards an invasion of Taiwan—more so, as Xi is now surrounded by yes-men: “[B]y replacing non-loyalists by proteges and loyalists in the party, Xi has made sure that no one will ever contradict him. The risk of one man making a bad judgement and starting a war is always greater than a group of them doing so.” The Guardian has more on why Taiwan is very worried.

Also making worrying moves: Russia—which is now accusing Ukraine of planning to use ‘dirty bombs’. These are crudely made devices designed to spread radioactive material over an area. Moscow has even written to the UN making these unsubstantiated claims.

Why this matters: A ‘dirty bomb’ would offer the perfect excuse for Moscow to exercise the nuclear option as a tit-for-tat. The Russian ambassador declared to the to UN: “We will regard the use of the dirty bomb by the Kyiv regime as an act of nuclear terrorism." Or it may be just a way to distract from Russia’s losses in Ukraine. (The Guardian)

A related read: Reuters looks at how Russia has weaponized water in Ukraine.

WhatsApp meltdown around the world

The messaging app was down for nearly two hours yesterday—one of the longest outages in its history. Both the phone and the desktop version were affected in many parts of the world—including Asia, the UK, South Africa and Europe. Meta has blamed it on an unspecified “technical error” that has now been resolved. FYI: WhatsApp outages can have serious consequences—when the app went down last October, it hit trading of assets from cryptocurrencies to oil. (Reuters)

One: Most unsurprisingly, Delhi became the most polluted city in the world overnight, thanks to all those firecrackers—despite a ban. The air quality sank to ‘very poor’ on two consecutive days. But here’s the really big shocker: the city also witnessed the cleanest ‘day after Diwali’ since 2015. Last year, the Air Quality Index for the same day was 462—and only 303 on Tuesday. Lots of this has to do with weather conditions that were windy and relatively warm—since Diwali came early this year. Wind direction also ensured that stubble burning in Punjab did not add to the pollution. (The Telegraph)

Two: Meanwhile, Ayodhya broke its own Guinness record for the largest display of oil lamps. The total number of diyas lit during a 40-minute window on Sunday: 1.576 million. As you can see below, this terrible waste of perfectly good oil looked absolutely stunning. Want more? Here’s a glimpse of 3-D scenes from the Ramayana that was projected for the crowds. (Times of India) 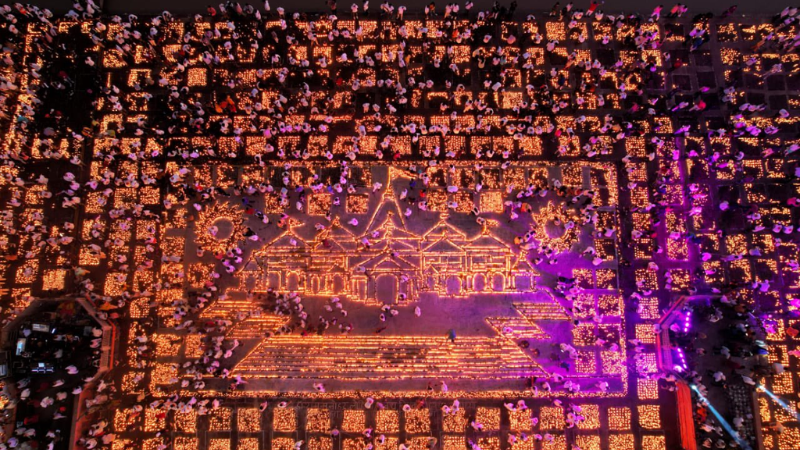 Three: In Washington, Joe Biden threw the biggest Diwali celebration hosted by the White House to date. In attendance: his Indian-origin Veep Kamala Harris. There was a lovely dance, diya-lighting ceremony and rangolis. But our fave is this musical performance by the US Marine Corps band. (NDTV)

Serena Williams has not retired

Many assumed that the tennis legend had hung up her racquet after the US Open—leading many to pay lavish tributes to the end of the Serena era. Turns out it was all a bit premature. She has now told reporters: “I am not retired. The chances (of a return) are very high.” For all her talk about “evolving away” from tennis, she insists: "I still haven't really thought about (retirement).” Hmm, why didn’t she say so before? (The Hindu)

Since the pandemic began, there has been a raging argument as to whether this particular coronavirus originated in animals or in a lab. Many recent studies seemed to put the debate to rest—pointing to natural sources. But new research claims that the SARS-CoV-2 was genetically engineered—stitched together from bits of other viruses. Their basic premise: “[C]reating a genome as long as that of SARS-CoV-2 would mean combining shorter fragments of existing viruses together.” The Economist (login required) has all the wonky details. But suffice to note that the study has not been peer-reviewed—so the jury is out until other experts get their shot to tear it apart.

The sneaker company finally dropped the rapper after he made a series of anti-semitic remarks. But they were among the last brands to do so—dragging their feet while the likes of Balenciaga, Gap, Vogue and JP Morgan Chase swiftly distanced themselves. In fact, Adidas did not act even though Ye said this on a podcast earlier this month (wow!):

What tipped the balance? Jewish groups reminding Adidas of its own Nazi history: “Adidas has to face up to its historic responsibility not just as a German company, but also as a company that was tangled up with and profited from the National Socialist dictatorship.” (The Guardian)

‘Kantara’ has a plagiarism problem

The makers of the widely acclaimed Kannada movie are being sued by a Kerala indie band for stealing their song. Thaikkudam Bridge claims that ‘Varaha Roopam’ is way too similar to their song ‘Navarasam’—which pays tribute to the art of Kathakali. The News Minute has more on the controversy. You can watch the ‘Navarasam’ video below, and then compare it to ‘Varaha Roopam’.

ICYMI over the Diwali break, the legendary 75-year-old novelist has lost sight in one eye and the use of one hand. His agent revealed that Rushdie suffered three “serious wounds” to his neck and “15 more wounds to his chest and torso” during the attack on him by Hadi Matar in August. El Pais has the whole interview while Associated Press has key highlights about Rushdie. We did a Big Story on the attack that has lots more context on the original fatwa.

One: Climate activists are on a roll these days. Their latest target: a wax figure of King Charles at Madame Tussauds in London. The ‘Just Stop Oil’ activists smashed chocolate cake on its face. This came on the heels of another group known as Letzte Generation throwing mashed potatoes onto Claude Monet’s ‘Meules’ at a museum in Germany—and others threw tomato soup at Vincent Van Gogh’s ‘Sunflowers’ in London’s National Gallery. Since when was it environmentally friendly to waste perfectly good food?

Two: Nepal police honour their service dogs every year on the second day of the local five-day Tihar festival—which is also celebrated in the nation as Kukur Tihar or the ‘day of the dog’. All canines are honoured, including streeties, as messengers of Yamaraj, the god of death The police bestow various awards—including ‘Dog of the Year’ for the best role in solving dastardly crimes of “national importance and concern.” The rest of the plebes just get all decked up and feel super-important. This video has the highlights of the police ceremony. Below is a lovely collage of the decked-up doggos. (The Hindu) 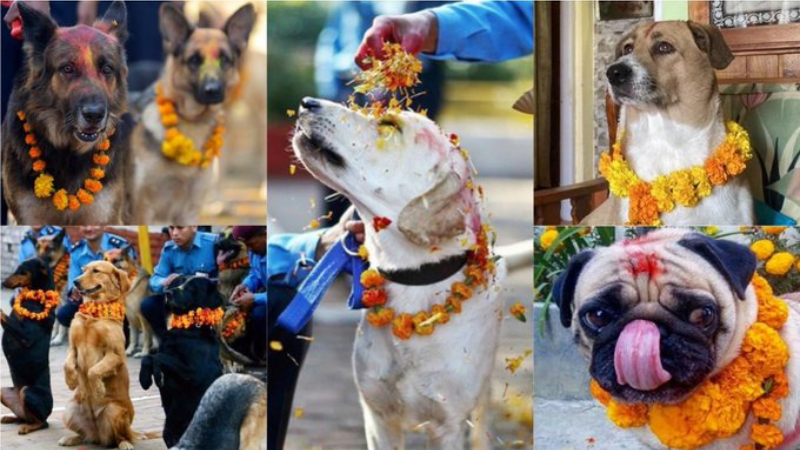