Shah Rukh Khan is coming back with ‘Pathaan’ at a difficult time for Bollywood. Amid routine boycott calls, increasing attacks from the Indian right-wing, changing preferences of moviegoers, competition from streaming and South Indian films, the Hindi-film industry is struggling to reinvent itself. Can Khan’s latest be the catalyst?

What’s up with ‘Pathaan’?

The Rs 2.5 billion-budget movie comes after a series of hiccups in his personal and professional life: ‘Zero’ and ‘Fan’ flopped at the box office and his son was arrested on a false case of drug possession (explained here).

The stakes are ​​high—and not just for King Khan. The Hindi film industry is struggling: big-budget movies are failing to impress cinema lovers, and movies with star actors are not making enough money.

Film trade analyst Taran Adarsh called the year [2022] “disastrous” for Bollywood. He said, “If there was one hit, it was followed by 10 flops. The ratio of hits and flops was alarmingly high this year.”

Experts point to a combination of factors: “Increasing disconnect with the masses, lack of creativity, faulty storytelling, too much emphasis on stars, and boycott calls against stars and films.”

‘Pathaan’ has also been subject to scrutiny and negative press:

One: In December, the Vishva Hindu Parishad (VHP) and Bajrang Dal were offended by the song ‘Besharam Rang’, where Deepika Padukone is donning an orange bikini which they said was a problem: it’s too close to saffron, Hinduism’s sacred colour.

So Khan’s effigies were burned. Some asked for a ban. Senior BJP leaders demanded action against the filmmakers. Yes, all this for a song—and, if I may, a mediocre song.

Two: Assam Chief Minister and BJP leader Himanta Biswa Sarma did his thing. “Who is Shah Rukh Khan?” he said when asked about Bajrang Dal activists setting the film’s posters on fire, and then hours later, he kind of retracted and tweeted:

Bollywood actor Shri @iamsrk called me and we talked today morning at 2 am. He expressed concern about an incident in Guwahati during screening of his film. I assured him that it’s duty of state govt to maintain law & order. We’ll enquire and ensure no such untoward incidents.

(Who needs movies for the drama, huh?)

In his characteristic style, Khan said things after the social media controversy. At the inauguration of the 28th Kolkata International Film Festival in December, the actor said:

Social media is often given by a certain narrowness of view that limits human nature to its baser self. I read somewhere that negativity increases social media consumption, and thereby increases its commercial value as well.

And he made a case for cinema:

Contrary to the belief that the spread of social media will affect cinema negatively, I believe cinema has an even more important role to play now…Cinema exposes the vulnerability of human nature by telling stories in their simplest form as they are lived.

We can only hope.

But all’s not well with Bollywood. Let’s look at five challenges the industry is facing.

One: The boycott problem

Calls for movie boycotts are routine: ‘#boycottbollywood’ and ‘#boycottbollywoodforever’ count among popular Twitter trends. Celebrities are trolled for “something as frivolous as attire or weight”, and insignificant matters are always hurting sentiments.

But oops: the boycott campaign failed. The movies had a thunderous opening with a weekend collection of around Rs 2.25 billion (225 crores). The collection of the movie at box-office worldwide crossed Rs 4 billion (400 crores), making it among the top performing Hindi films of that year.

#2 Laal Singh Chaddha: Boycott because of Aamir Khan—that’s enough! His remarks from 2015 didn’t go well with the ruling establishment and its supporters. At the Ramnath Goenka Awards that year, he joined the outcry against intolerance, saying he was “alarmed” by several incidents. His then-wife Kiran Rao even suggested that they should probably leave the country.

And boycott possibly the film’s treatment of some historical events of India in the movie.

This movie tanked. It made around Rs 560 million (56 crores)—only a quarter of its budget.

But it’s lazy to attribute the film’s lacklustre performance to boycott calls alone: it got many poor reviews and didn’t do well with cinema viewers.

The fate of these two films says something: it is hard to draw a direct correlation between boycott trends and the success of Bollywood movies. As one analyst said:

Boycott’s impact on the box office is an unsubstantiated story…All kinds of films have faced boycotts; some worked and some didn’t.

A study on the Twitter boycott trends says that the Sushant Singh Rajput case is “absolutely central to the current round of Boycott Bollywood messaging”.

It works on two levels:

First: “Involves high-recognition influencers that rely on reaching out to the core supporters of the ideology, but also beyond that to the general public.”

Second: Work “focused on ‘trending’ #BoycottBollywood and other related hashtags. This part of the campaign operates much like a political or brand management campaign which seeks to reach the top of daily trending through high numbers.”

Most of the handles that tweet out anti-Bollywood tweets are dominated by the SSRians “who did the bulk of the work of putting out the messages, getting them to go viral and hit the Twitter daily trending messages.”

FYI: We looked at SSR’s death in our Big Story.

One can make a case that Bollywood has an identity crisis—at least in how it’s perceived.

To some, the industry is a bastion of a secular, liberal vision of India, thanks in part to its many Muslim stars, Khan included. But to its Hindu nationalist critics, it is a cosy club of condescending, nepotistic elites producing films that antagonise religious sensibilities and it needs reform.

This matters. Unlike a few years ago, when troubling events could be pinned on faceless “fringe elements”, they now are increasingly a force to reckon with and hard to completely ignore.

Which brings up the “what people want” question.

“When someone thinks of a movie idea—not just me but other people who think of themselves as liberals—they think, Is it OK if my hero is a Muslim?” he told me. “But the darker question is: Is there even an audience out there for this kind of movie?”

Polarisation impact: Ormax Media’s research among Hindi film-goers found that political polarisation impacts people’s attitudes and behaviour towards films. The likeability of films with conservative or liberal themes correlates with viewers’ politics, they found. See the chart below to see the difference in Word-of-Mouth (audience likeability) for the five “nationalist” films. 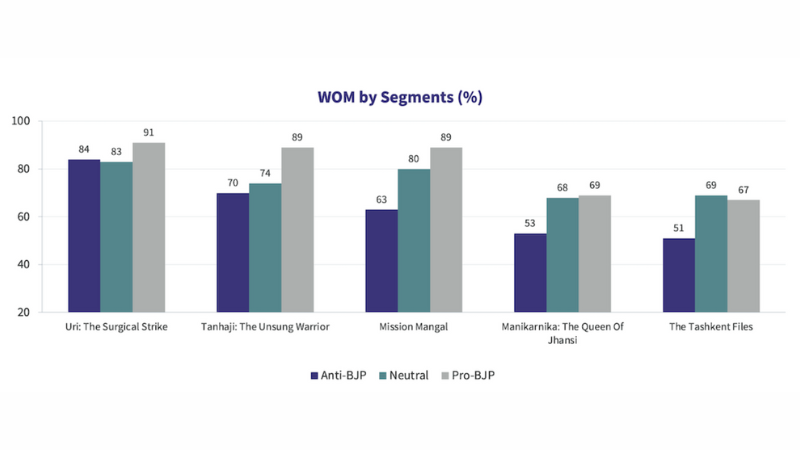 Political considerations in the film industry have also led to the “review-bombing” phenomenon: large numbers of users artificially alter the ratings of a movie on user-operated sites like IMDb and Rotten Tomato.

For example, ‘Brahmāstra: Part One – Shiva’ saw a flurry of 1-star reviews even before the first show had ended.

On the flip side, ‘The Kashmir Files’ did so exceedingly well that IMDb looked into the “unusual voting activity” that gave the film a 9.9 rating immediately after release. The platform eventually altered its rating method, bringing the movie’s ratings to 8.7.

In 2022, it was evident that Bollywood was simply tanking—with ticket sales plummeting month-on-month:

Of the 26 releases this year [till September 2022], 20—or 77%—have been flops, defined as losing half or more of their investment, according to the Koimoi website, which tracks industry data. That's about double the failure rate of 39% in 2019, before the onset of the COVID-19 pandemic.

One reason is the boom of non-Hindi films like Telugu action flicks ‘Pushpa’ and ‘RRR’ and the Kannada film ‘KGF: Chapter 2.’

These South Indian films have filled the void created by Hindi films that moved away from the traditional desi entertainment formula that kept everyone in mind—from the rickshaw-puller in the stall to the rich guy in the balcony seats.

A telling stat: Around 40% of commercially successful Bollywood films in recent years have been remakes of South Indian films. But this soon became a problem for the South when Hindi copies began to outperform at the box office.

And thus began the saga of Hindi-dubbed versions in huge multilingual releases for movies that were now being dubbed “pan-India”.

Most stuff mentioned above are external factors. But the industry also must look inwards: are they making good movies?

The rise of streaming services has changed the nature of the consumption of cinema. There’s been an exponential increase in content consumption and expectations, and as some say, Bollywood isn’t making films that appeal to the country’s masses.

If the content is good, people will watch, and nothing, no IPL matches, no exams, no weather conditions, or boycott calls can work against it.

Self-assessment is needed about what we are making and how we are making it—that’s necessary and that’s what is lacking. If a film is bad, it doesn’t work, and doesn’t get boycotted. People don’t go to the cinema halls. That’s also a boycott then, isn’t it? There is no social media campaign then, and no hashtag but the film still doesn’t work. But yes self-assessment is needed.”

The bottomline: We love Shah Rukh Khan—vitriolic hatred be damned! And we can’t wait to watch him dancing and fighting and opening his arms on the big screen. Only time will tell if King Khan can spell his magic for the struggling Hindi-film industry.

BBC News and Financial Times lay down the controversy around Pathaan and why the movie matters. The Caravan has a deep-dive on Shah Rukh’s politics over the years. New Yorker has a long read on Bollywood’s struggle with the Hindu right. Frontline describes the boycott trends. NewsLaundry gets into the boycott Twitter-verse. Ormax Media has an interesting study on the impact of political ideology on movie preferences. Mint looks at the IMDb review problem. Moneycontrol analyses why things aren’t working for Bollywood.