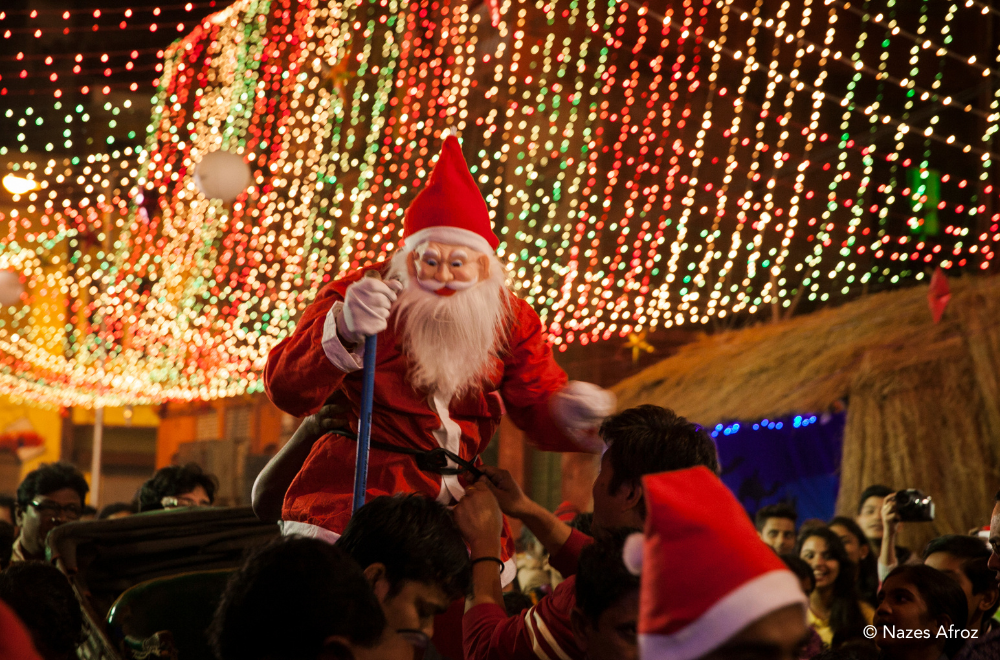 Editor’s note: This wonderful essay by Jerry Pinto offers a colourful account of his childhood memories of ‘chutnified’ Christmas in Mumbai—of skinny brown Santas, snowflakes made of cotton balls and scratchy polyester trousers in church. It is an excerpt from ‘Indian Christmas: An Anthology’ edited by Pinto and Madhulika Liddle–and published by Speaking Tiger Books.

I remember my surprise when I saw my first live Santa Claus. He was a figure in red that Akbarally’s, Bombay’s first department store, wheeled out around Christmas week. He was a thin man, not very convincingly padded, and he was in some kind of toy car which he pedalled frantically around the store, waving at bemused children and adults. He was nothing at all like the rotund Santa of glossy greeting cards and storybooks. But within a few minutes I had warmed to him, laughing at his cheerful ‘Ho-Ho-Hos’, and then laughing with him.

He seemed to be from my part of the world, someone who would climb up our narrow Mahim stairs and leave something at the door for us at three or four am, then take the local back to his regular job as a postman or seller of second-hand comics. The man in the cards and storybooks preferred London and New York. And a lot of snow.

There wasn’t much snow in Bombay, except when someone from the family pulled out an old record of Jim Reeves singing ‘White Christmas’ and we all listened respectfully because ‘those old singers were the best, what voices—you can understand what they’re saying, not like this modern noise’. (Where do old songs from the US go to die? They go to Goan Roman Catholic homes and parties.) But since we had seen snow on the Christmas cards that came from cousins abroad, we dutifully unrolled balls of cotton wool and decorated inoffensive young casuarinas, dressing them up as pine trees.

Christmas was about Jesus, yes, and about the Nativity, yes, but it was also about food. Everyone had a family member who had soaked the raisins in the rum when October came around and sent it all to be baked at the Irani down the road which did the honours lovingly. Everyone had a friend who made marzipan with peeled almonds, or who made marzipan with the skins and this was debated every year. Everyone also knew that when the sweets came out, you had to pounce on the good stuff—the milk creams and the slices of that cake with the luscious raisins—or you’d be stuck with the rose cookies and the neoris, which were just plate-fillers.

Quite contrary to public imagination, we did not eat large quantities of meat. In Bombay, protein was fish for most of the week and on Sundays, we might have chicken. Pork was meant for special occasions, vindaloo and sorpotel being favourites because everything could be tossed into the curry. Only the upper classes had things like pork roast and the pigling with the apple in its mouth.

We also knew that we would go to church on Christmas Day and that the new polycot trousers would scratch behind the knee and the entire building would smell of Old Spice, An Evening in Paris and 4711, the eau de cologne from Maurer & Witz marketed for older women. Those were the days when we used perfume on special occasions, like Christmas. The rest of the time we made do with Cuticura or Ponds Dreamflower Talc. And so, naturally, the parish priest would upbraid us for allowing Christmas to be overwritten by capitalism.

We dreamed through those sermons but often the priest was right. Today, it is almost a cliché to say that Christmas, like every other festival, is hostage to the market.

But just stop for a moment, ignore the demands on your wallet, the shrill cries of the merchant who wants you to spend. Ignore the accretions that occur even in a country where less than three per cent of the population is Christian of any form or persuasion, and come back to the basics.

The central celebration is the birth of a child. There is no culture that does not celebrate this event, because all of us who belong to the human race can see our collective future in the pudgy little face. We marvel at this conjuring act, the miniature miracle, at its tiny fingernails and budlike nose. That life should bring forth life is such an ordinary thing that in general, we do not celebrate it. If we did, we should stop and marvel at the mould that grows on an orange that is past its prime (for us, not for the mycelia which think it delightfully ready), and we should gasp in delight at the sight of moss growing on a wall in the monsoon.

All this is life making a bid for the future, thrusting itself forward with no assurance that it will be allowed to continue. But let us forgive our species its parochialism, and let us agree that a human birth is indeed special.