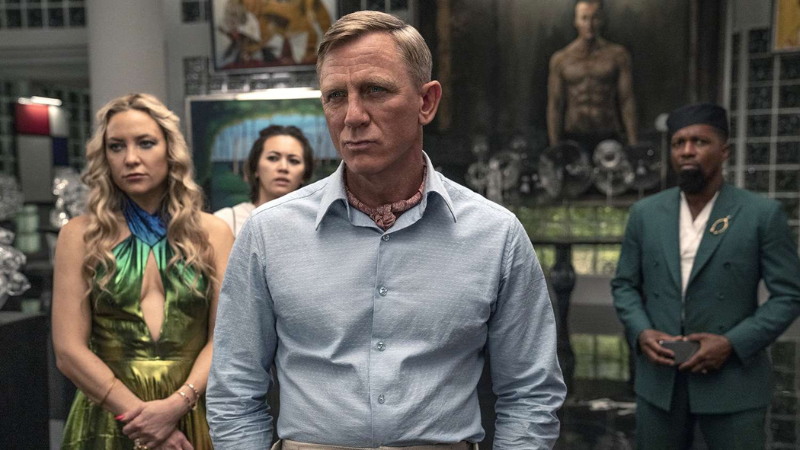 Roald Dahl’s Matilda the Musical: The musical film adaptation of the popular Roald Dahl book ‘Matilda’ is finally making its way to OTT. The tale of this musical is all too familiar: A young and sharp girl is compelled to live with mean foster parents—and battle other bullies at school—the most fearsome of whom is principal Agatha Trunchbull. Director Matthew Warchus stays mostly faithful to the original but offers a superpower twist—giving Matilda the gift of telepathy.

The Guardian says it is a “tangy bit of entertainment, served up with gusto” but the “tiniest bit exhausting.” Variety believes the film “makes it to screen on a buoyant cloud of high spirits and witty songcraft” but refrains from terming it a “classic” because of insufficient “movie musical dynamism.” LA Times loves the fast-paced energy but thinks it could use “a little messier, more rambunctious energy.” We think this nostalgic reboot is perfect for the holidays. It drops on Netflix on December 25.

Glass Onion: A Knives Out Mystery: This is the much-awaited sequel to the wildly popular murder mystery ‘Knives Out’. The whodunit begins with a billionaire entrepreneur gathering a group of his friends on a private island to solve the mystery of a make-believe murder of himself. Except real bodies start to pile up, and it’s left to trusty Benoit Blanc (Daniel Craig) to bring the murderer to justice. Expect a change of pace from the first movie—where the characters belonged to the old-fashioned country house set. This movie is all about delusional billionaires, fashion moguls and YouTube influencers.

New York Times says the sequel “revives the antic, puzzle-crazy spirit of the first”—praising how director Rian Johnson approaches “the classic detective story with equal measures of breeziness and rigor.” The Guardian appreciates the film’s “mischievous”  screenplay and says it “crams in so many laughs you almost don’t notice the occasional plot holes.” We can’t wait to watch the next instalment of one of our fave movies. It drops on Netflix today.

White Noise: Don DeLillo’s 1985 novel is adapted by Director Noah Baumbach into a satire that mirrors our present-day world. Jack Gladney (Adam Driver), his wife Babette (Greta Gerwig) and their two kids must evacuate from their town following an “airborne toxic event.” This is both a domestic drama and a social commentary on the existential angst of 21st century life—before it fully embraces all the norms of the disaster action flick.

The reviews have been mixed. The Guardian calls it a “tremendously elegant and assured adaptation” of the novel. LA Times calls it a “loud, brash and enjoyable spin” that is “at once wildly mercurial and fastidiously controlled”—and also “funny, unruly, mischievous and disarmingly sweet.” Mashable is not entirely sold on the “fascinating and frustrating” film that is more “dizzying than entertaining.” Most of the reviews are penned by fanboys of DeLillo—who belongs to the pantheon of white American male novelists. If American middle class preoccupations are not your thing, this movie is unlikely to interest you. ‘White Noise’ will stream on Netflix on December 30.

Big Bet: South Korean superstar Choi Min-sik (Oldboy) makes his return to the small screen in this action series about a billionaire casino mogul. But his fortunes take an abrupt turn for the worse when he is arrested for murder. The main plotline is interspersed with flashbacks to the many ups and downs of his entrepreneurial past.

There aren’t many reviews available as yet. FWIW, NME says it is heavily inspired by a trio of Martin Scorsese masterpieces”—'Goodfellas’, ‘Casino’ and ‘The Irishman’. It praises the superb cast and “engaging story”—but says it gets off to an uneven start. The first three episodes of the series landed on Disney+ Hotstar on Wednesday.

Emily in Paris Season 3: Yes, this show is our guilty pleasure. We’re not going to summarise the story arc or the main characters. But if you really need a summary of what to expect, the reviews below have what you need. By now, you’re either totally addicted to watching this shit—or not.

Here’s the bad news if you’re an Emily fan: Critics unanimously agree that season three has teetered off the edge of time-pass silliness—straight into unbearable vacuity. The AV club calls it “visually decadent but narratively mind-numbing… Unfortunately, no amount of flashy wardrobe changes and gorgeous scenery make up for a tedious plot, pacing, and protagonist.” The Independent says the terrible acting and hokey lines “make your stomach churn more than a 2am Big Mac.” Fans of the show over at Jezebel are not happy with Emily or this season—but think the other characters offer respite. Yeah, you’re either going to hate-watch this one or not. The series dropped on Netflix on Wednesday.

PS: If you’re looking for some mindless fun—but can’t stomach any more of Emily—we suggest checking out the K-drama ‘The Fabulous’ on Netflix. It follows a group of four friends obsessed with fashion—all trying to make it into the industry. It should offer just the right combo of fab outfits, glitzy locales and female angst:)