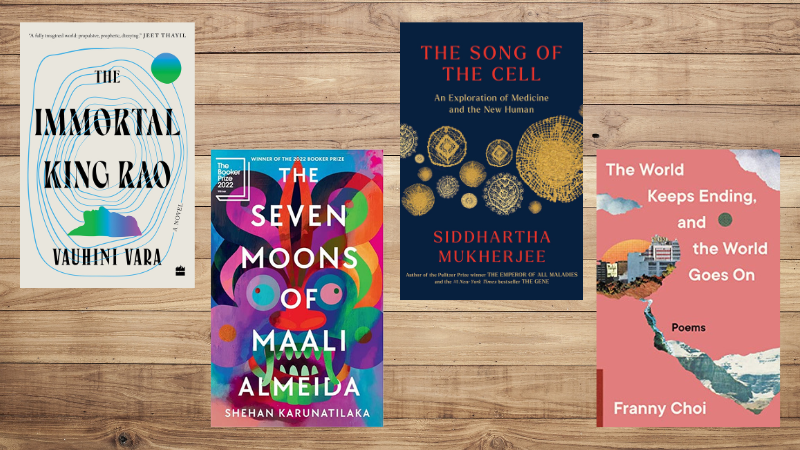 Editor’s note: Rushing to complete your reading challenge for 2022? We have the perfect hack for you: the best in fiction, non-fiction and poetry—culled from a plethora of year-end lists out there. We have recommendations for every kind of topic and genre—be it gaming, chemistry, murder mysteries, climate change, historical fiction, science, literature, conservation, womens’ butts and more.

Lessons In Chemistry: by Bonnie Garmus. Elizabeth Zott is a smart and talented scientist in 1960s California—when equality, especially in any scientific field, was not the norm. Her life takes an unexpected turn when she finds herself working as a television cooking show host—as a new single mother. Garmus’ debut novel navigates misogyny, motherhood and more with a comic touch.

The Guardian calls it a “sweet revenge comedy” that is a “rare beast; a polished, funny, thought-provoking story.” New York Times says it is “irresistible, satisfying and full of fuel.” Washington Post praises Garmus as she “delivers an assured voice, an indelible heroine and several love stories.”

The Seven Moons of Maali Almeida: by Shehan Karunatilaka. This Booker Prize winner was a no-brainer pick. Described as “an afterlife noir,” the novel is set at the height of the civil war. Maali Almeida—“war photographer, gambler and closet gay”—wakes up dead in what appears to be a “celestial visa office.” He has no idea who killed him—and has seven moons to figure it out and lead his lovers to a cache of explosive photos of the war. Meanwhile, he is surrounded by the maimed and mutilated spirits of the casualties of war—trapped along with him in an afterlife run by all-too-familiar babus.

Kirkus Reviews calls it a “manic, witty, artfully imagined tale of speaking truth to power,” while Washington Post says it “swings wildly from absurd comedy to grotesque tragedy.” The Guardian applauds Karunatilaka for his “artistic justice to a terrible period in his country’s history.”

Tomorrow, and Tomorrow, and Tomorrow: by Gabrielle Zevin. Childhood friends and science geeks Sam and Sadie create a game called Ichigo. The game catapults them to success, but creative differences, money matters and mixing business with friendship—perhaps, romance—throw many spanners in the works. The novel blurs the lines between the worlds outside and inside the game–each illuminating the other. FYI: This book is being made into a feature film by Paramount.

NPR was pleasantly surprised by “a big, beautifully written novel about an underexplored topic, that succeeds in being both serious art and immersive entertainment.” The Guardian calls it “an artfully balanced novel – charming but never saccharine. The world Zevin has created is textured, expansive and, just like those built by her characters, playful.” The book also features on TIME’s must-read books of the year.

The Bangalore Detectives Club: by Harini Nagendra. Set in 1920s Bangalore, this is a delicious treat for mystery novel buffs. The heroine is 19-year-old Kaveri—who has newly moved to the city to join her physician husband Ramu. The action kicks off with a murder of an uninvited guest at a party—who turns out to be a local pimp. The atmospheric novel vividly evokes colonial India—albeit an upper class version of it. And it delivers its feminist critique of Indian patriarchy with a light hand.

Publishers Weekly appreciates Nagendra for placing her “intelligent and clear-eyed protagonists in the multilayered and multicultural milieu of colonial India.” The Hindu calls it a “charming thriller” and says: “Kaveri’s character—a sari-wearing, coffee-drinking lady sleuth who also loves to cook for her husband—is as interesting as it gets.”

The Immortal King Rao: by Vauhini Vara. This widely praised novel is almost impossible to summarise. You can read it as a story of a Dalit man King Rao who immigrated to the US—to become the founder of a powerful tech company that rules the world. It is also a dystopian novel set in a future where governments have been replaced by a mega-corporation, algorithms decide policy and citizens are called ‘shareholders’–-even as global warming is gradually killing human civilization and probably all life on the planet.

New York Times calls it a “monumental achievement: beautiful and brilliant, heartbreaking and wise, but also pitiless.” Kirkus Reviews notes how this “boldly reimagined” novel “rewrites the history of big tech into a mythic immigrant story of dystopian proportions.” Fair warning: The Guardian lauds her ambition, but finds the themes overly familiar, complaining that the book “suffers from trying to take on too many ideas at once, with the novel’s sense of identity inevitably weakened as a result.”

The World Keeps Ending, and the World Goes On: by Franny Choi. In her third collection of poems, Choi turns to intergenerational trauma and the fears of living in a world skating on the edge of calamity. Publishers Weekly calls it “urgent and lyrically dynamic”—praising her imagery as “evocative and indelible.”

Time Is a Mother: by Ocean Vuong. This is the second poetry collection offering from the author of ‘On Earth We’re Briefly Gorgeous’. Vuong’s intimate exploration of grief is sparked by the shock of his mother’s death. Personal loss is at the centre of these poems, but also the tragic history of his illiterate refugee Vietnamese mother.

The Guardian lavishly praises Vuong’s writing: “These ghost poems are about the cavernous corners of loss, grief, abandonment, trauma and war, but that doesn’t result in nihilism or apathy for life; in fact, Vuong approaches death like an entrance rather than an ending.” Publishers Weekly is convinced the “fantastic book will reward fans while winning this distinctive poet new ones.”

What’s Left of the Jungle: by Nitin Sekar. This is a personal account of a wildlife conservationist of his time at the Buxa Tiger Reserve in Bengal—which has many elephants but far too few tigers. The book offers a unique perspective of the perennial human-animal conflict—and the complicated negotiations it requires between both species. One thread traces the journey of Akshu Atri–who lives a precarious existence on the frontlines of this ongoing war with nature.

The Hindu calls it “a unique book, for its unabashed warmth towards its animals and human subjects, and for its rich reflection of a life that is really wild.” The Telegraph appreciates the “illuminating anecdotes, engaging dialogues along with vivid descriptions of the forest” that make for “an immersive reading experience.” Scroll praises it as “subtly impassioned and driven by consistent curiosity and heart.”

Index: A history of the: by Dennis Duncan. This is a delightful and thoughtful book about a lowly and often ignored subject: The index—that long list shoved in at the end of a book. It sweeps through the history of the index—from its 13th century origins through the advent of the printing press—all the way to the age of the digital search engine.

New York Times offers this lavish praise: “This book is, on one level, a history of information science, but it’s also a history of reading and writing and everything those actions entail — communication, learning and imagination, as well as competition, anxiety and no small amount of mischief.”  Washington Post agrees, calling it “witty, engaging, knowledgeable”—”an adventure, and ‘bookish’ in the most appealing sense.”

The Song of the Cell: by Sidhartha Mukherjee. The Pulitzer Prize winning author of ‘The Emperor of all Maladies’ turns his attention to the building blocks of all life. This is far more than a course in basic biology—though you will certainly learn a lot along the way. Mukherjee’s prose traverses the history of scientific discovery–strewn with colourful characters, missteps and fierce debates.

The Guardian calls it a “masterclass in how cells function and malfunction that will leave you in awe of biology.” New York Times says the writing is often “so lovely that you can get caught up in its music.” Washington Post calls it “a lively, personal, detailed, often moving account of the cell in medical history and its promise in the present.”

Butts: A Backstory: by Heather Radke. The world has for long been fascinated with human butts—women’s butts. Journalist Heather Radke dives into the reasons behind this. ’Butts’ is a cultural history of women’s backsides and the way they are obsessed over, fetishised and discussed in society. She also explores the abundance of criticism women face for a butt of any kind. From the aerobic routines of the 1970s to twerking today, butts and their portrayal have come a long way—and the obsession with them remains. Radke lays out all there is to know about the female posterior.

Washington Post terms it “cheeky and illuminating” and appreciates that Radke is “witty, incisive observer, particularly when she steers clear of academic jargon.” New York Times calls it a “narrative of physical suffering” with a “sporadic and careful sense of humour.” It’s a “whip-smart history,” according to Publishers Weekly.

Bonus reads: Journalist Jairaj Singh asked Twitter to share “that one book you read this year that blew your mind.” The result is this very handy Twitter thread.