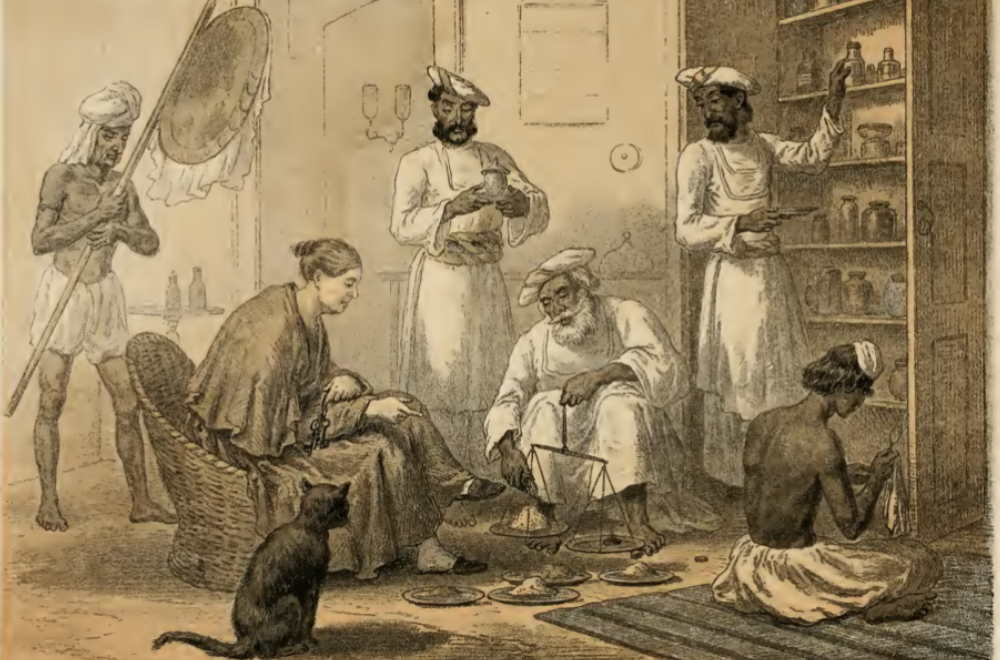 A colonial history of culinary theft

About the author: Lakshmi Chaudhry is the founder-editor of splainer.

About the lead image: This is a lithograph from Captain George F Atkinson’s ‘Curry & rice on forty plates—the ingredients of social life at our station in India’. (Source: The Heritage Lab)

Back in 2001, then British Foreign Secretary grandly declared, “Chicken tikka masala is now a true British national dish. It is a perfect illustration of the way Britain absorbs and adapts external influences. Chicken Tikka is an Indian dish. The Masala sauce was added to satisfy the desire of British people to have their meat served in gravy.” Two decades later, Britain now has a prime ministerial equivalent of the CTM—a dishy Rishi perfectly tailored to suit British tastes. No added gravy required.

We Indians are far more ambivalent about phoren appropriations of our food than of our people (Go NRIs!). To be fair, our shared culinary history offers plenty of reasons to grumble—about bastardised ‘curries’ and ‘chutneys’. It’s a bit ironic given the havoc we have wreaked on almost every cuisine in the world. But we natives are finally having our own sweet moment of revenge, serving up overpriced Amul cheese as a haute cuisine delicacy to unsuspecting white folks in New York and London.

In tribute to our long culinary tryst with the West, here’s a jolly good jaunt through the many dishes that have marked its milestones.

After 200 years of gorging at the Great Indian Buffet, the Brits departed not just with the Kohinoor but also our food. Now they pretend it belongs to them—just like the Kohinoor. But unlike the diamond, no self-respecting Indian wants any of these culinary gems back.

Curry powder: Lately, everyone has been complaining about the word ‘curry’—slamming it as “an umbrella term popularised by white people who couldn’t be bothered to learn the actual names of our dishes.” All this outrage studiously ignores the ubiquitous presence of the c-word on Indian menus—be it the egg curry at my local dhaba or the mutton curry at the hole-in-the-wall restaurant.

The real villain, of course, is its condiment cousin: curry powder—a concoction devised by returning colonialists nostalgic for Indian spices. The first known advertisement for curry powder was for Sorlie’s Perfumery Warehouse in Piccadilly in 1784, which declared:

It is exceeding pleasant and healthful—renders the stomach active in digestion—the blood naturally free in circulation—the mind vigorous, and contributes most of any food to an increase of the human race.

If that seems a bit rich, in the middle of the Potato Famine in Ireland, the Duke of Norfolk helpfully advised the starving Irish to enjoy a hearty meal of curry powder mixed with water—which is undoubtedly worse than any cake recommended by Marie Antoinette. By the Victorian era, the curry powder had become a staple resident of the English pantry. Among the most popular was an 1822 recipe from William Kitchiner—which recommends soaking the powder for ten days in a quart of vinegar or white wine to create a paste.

The ‘Cherry on Top’ moment: Modern recipes for curry have not offered much improvement. Example: the Christmas turkey curry buffet (god help us!) most famously featured in ‘Bridget Jones's Diary’—which offered this moment of romantic epiphany:

Chicken Tikka Masala: According to its origin story, Ali Ahmed Aslam, a Bangladeshi chef at a Glasgow restaurant, revolutionised the British palate by adding tomato soup and dahi to the chicken tikka—to please a customer who asked for a “bit of sauce.” Some Indians are keen to lay claim to the dish—insisting it has rarefied Mughal origins.

But they are no match for the Labour Party MPs who demanded ‘Protected Designation of Origin’ status for chicken tikka masala within the European Union in 2009—elevating the dish to lofty heights occupied by French champagne. On a sad note: the original tomato soup has not survived the test of time—and has since been replaced by the more humdrum “tinned tomatoes.”

The ‘Cherry on Top’ moment: The mighty chicken tikka masala has since been toppled from its perch as Britain’s favourite curry. The new favourite in 2022: the no-less dubious chicken korma. At #3: chicken madras. Our favourite pop culture moment: This scene with James Corden from ‘Gavin and Stacey’—which is all the more amusing for his pronunciation of ‘bhuna’:

Kedgeree: Of the many British travesties, none quite compares what they did to the khichdi—the go-to panacea for the first sign of any ailment in an Indian household. The Frankenstein version of the dal/rice staple is the perfect symbol of imperial excess. It was created because “the occupying forces of British empire felt the dish needed to be refined, prettified and gourmandised.” According to historian Lizzy Collingham:

It was a dish invented for the British in India and was served at country houses or parties. In India, because the British liked fish, it was usually served to them in the mornings when the catch was fresh. That is perhaps how it got added to the rice and lentils.

But the recipe grew ever more monstrous when exported back to the country houses in England:

The wealthy often indulged in hunting parties and would have smoked kippers for breakfast. This was added to the kedgeree too. To serve such dishes in Britain showed that the host had connections with the East India Company, a thing of prestige. And because the British loved the Indian concept of garnishes like coriander leaves and caramelised onions, quartered hard-boiled eggs, usually on breakfast menus, were added as finishing touches to the kedgeree.

The ‘Cherry on Top’ moment: The present-day gourmet version of the recipe uses “undyed smoked haddock fillets, from sustainable sources” instead of kippers. And The Guardian recommends pairing the kedgeree with “a dry, fresh cava with reasonable acidity” or “a good, herbal, lemon-kissed Czech pils.” Most Indians are about as impressed with what the Brits call progress as this haddock:

A hat-tip to the many ‘khichris’: Given that the khichri’s provenance extends as far back as 300 BC—where it finds mention in Kautilya’s writings—it has spawned many variations. It is also thought to be the ancestor of Egypt's national dish, koshary, which is made with rice, lentils and… macaroni—likely borrowed from the Italians!

Worcestershire sauce: It seems only fitting to end this list with this alleged Indian export. The story goes that in the 1830s, Lord Sandys—the former governor of Bengal—returned to Worcester and asked two local chemists to whip up his favourite Indian sauce. The result was a sauce “so fiery that it made their eyes water”—and the barrels were consigned to the cellar where they aged like fine wine. The result: The all-too-familiar Lea & Perrins worcestershire sauce. Sounds about right except there was never any governor of Bengal named Lord Sandys. Most historians agree that this was likely a bit of exotic myth-making by the company’s founders. Even its spokesperson has admitted that the story "may not be God's own truth."

PS: According to author Chitrita Banerji, Indians like to claim the sauce was “created by a quick-witted cook employed by a British or Anglo-Indian master, in order to mask the taste of meat that had gone off.”

The ‘Cherry on Top’ moment: Most fittingly, tabloid journalist Tom Utley ran into trouble for “cultural appropriation” when he recommended adding worcestershire sauce to spaghetti bolognese. This in turn provoked great ranting on his part about the “woke mob.” And Indians everywhere had a good laugh.

The natives strike back: Amul cheese anyone?

In 2022, the colonial progeny of Indian cuisine are no longer consigned to balti houses or the local takeaway. The cookbook put out by the chi-chi London restaurant Benares includes a 30-ingredient recipe for Chicken Tikka Masala Pie with Wild Berry Compote. Another fine dining establishment Zaika serves an “Indian risotto” of khichdi topped with crispy prawns. But we Indians may still have the last laugh.

Cafes in the US are now serving Lasooni Maggi. In New York magazine, Priya Krishna lures her American readers with this lavish description of “India’s answer to Instant Ramen”:

[T]hey are perfect—spicy, salty, and equally delicious whether prepared really soupy or more like a loose sauce… I love to doctor them up with soy sauce and a ton of cracked black pepper, and/or sauté ginger and garlic before adding the noodles and the soup base.

But no one quite matches the chutzpah of Priyanka Chopra whose New York restaurant Sona offers an $18 chilli cheese toast on toasted sourdough bread—with gruyere and Amul cheese plus chilli chutney. Please note: You have to shell out an extra $4 to add a fried or poached egg. Shabash!