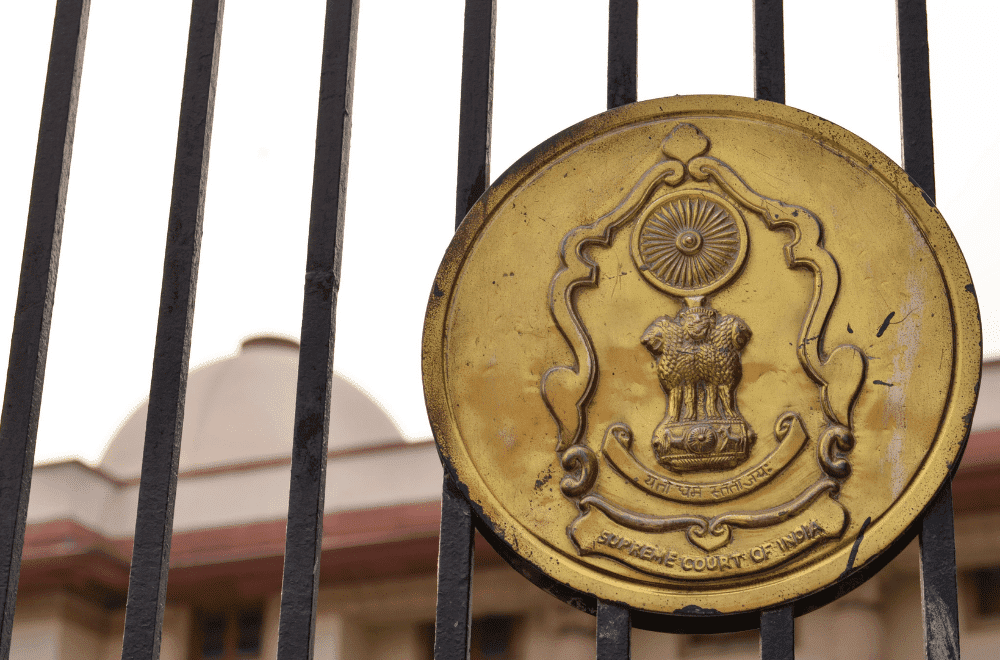 Variously described as a “liberal lion” and a “rockstar,” soon-to-be Chief Justice Chandrachud will preside over the Supreme Court for two critical years–during the run up to the national elections. So what can we expect from this new chief in town? Here’s a quick guide to his judicial career.

Wait, how do we pick a Chief Justice?

The process: is determined by something called a Memorandum of Procedure—agreed upon by the government and the judiciary. The MOP is based on three landmark Supreme Court decisions—and they collectively vest the power to appoint judges in the judiciary. In the case of the Chief Justice of India, the baton is passed to “the seniormost Judge of the Supreme Court considered fit to hold the office.” The Law ministry seeks the recommendation of the outgoing Chief Justice of India—and then presents it to the Prime Minister. The PM then “advises” the President on the appointment.

According to the MOP, “Whenever there is any doubt about the fitness of the seniormost Judge to hold the office of the Chief Justice of India, consultation with other Judges as envisaged in Article 124 (2) of the Constitution would be made for appointment of the next Chief Justice of India.”

Point to note: Over the years, the government in power has often tried to seize control over the process. That jostling for power is significant since the exact procedure to make judicial appointments is not laid down by the Constitution. The seniority rule was broken twice during the Emergency era—when Indira Gandhi notoriously picked submissive CJIs—who superseded their more senior peers.

For example: in 1977, she appointed MH Beg—pushing aside HR Khanna who was the only one to dissent in a Court ruling that gave the government the power to suspend basic rights to life and liberty during an Emergency. Known as the Habeas Corpus case, it was one of the most shameful moments in the Court’s history.

More recently: In 2016, the Supreme Court struck down the National Judicial Appointments Commission (NJAC) Act—which proposed the creation of a committee to appoint high court and Supreme Court judges and chief justices. Made up of members drawn from the judiciary, legislature and civil society, it would have replaced the Supreme Court collegium which makes these calls. Although the Act was passed by both houses of the Parliament and greenlit by the President in 2014, it was later declared unconstitutional by the Court.

Ok, tell me about Chandrachud…

In daddy’s footsteps: His appointment is in keeping with his family tradition—since his father, YV Chandrachud was also a Chief Justice of India. In fact, Chandrachud Sr is notable for two reasons. He is the longest-serving CJI in the Court’s history—with a term of seven years and four months. He is also infamous for kowtowing to Indira Gandhi during the Emergency. FYI: during his judicial tenure, the son has overturned two of his father’s rulings—including his majority opinion in that infamous Emergency case But he has also credited his father for teaching him that “law should have a human face.”

The career highlights: Chandrachud received an A-class education, including a Bachelor’s from St Stephen’s and a Master’s from Harvard University. He first served as a lawyer both at the High Court and later at the Supreme Court. Chandrachud began his judicial career as a judge in 2000 at the Bombay High Court. After a stint as the Chief Justice of the Allahabad High Court, he moved to the Supreme Court in 2016. He has since voted in a series of significant cases involving constitutional rights.

FYI: This is what he looks like—in photos taken with current CJI UU Lalit: 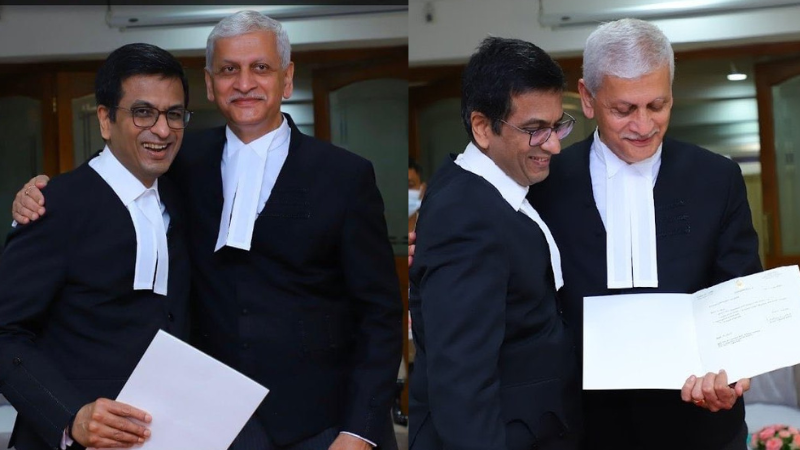 Chandrachud’s Supreme Court career is notable both for his rulings—and minority dissents. Here is a quick list of the cases:

Right to marry: Soon after ascending to the Supreme Court, Chandrachud ruled in the Hadiya case—which involved a young woman who converted to Islam to marry her Muslim husband. Her family claimed she had been “brainwashed”—and the Kerala High Court annulled the marriage, returning Hadiya to her parents’ custody. Chandrachud was part of the three-justice bench which unanimously set the ruling aside—and upheld Hadiya’s right to marry who she chose. Chandrachud wrote:

“The choice of a partner whether within or outside marriage lies within the exclusive domain of each individual. Intimacies of marriage lie within a core zone of privacy, which is inviolable. The absolute right of an individual to choose a life partner is not in the least affected by matters of faith… Neither the state nor the law can dictate a choice of partners or limit the free ability of every person to decide on these matters. They form the essence of personal liberty under the Constitution.”

This first step toward recognising the right to privacy was later sealed in a landmark Court ruling in 2017.

Right to privacy: Chandrachud was one of nine justices who delivered the landmark Supreme Court ruling—which established the right to privacy as “intrinsic to life and liberty”—the fundamental freedoms guaranteed by the Constitution. He personally wrote the judgment, declaring: “Natural rights (like privacy) are inalienable because they are inseparable from the human personality.”

Point to note: This is also when he voted to overturn the Emergency-era precedent created by his own father in the Habeas Corpus case, writing: “the judgments rendered by all the four judges constituting the majority… are seriously flawed.” Chandrachud stirringly declared:

“No civilized state can contemplate an encroachment upon life and personal liberty without the authority of law. Neither life nor liberty are bounties conferred by the state nor does the Constitution create these rights. The right to life has existed even before the advent of the Constitution.”

The Aadhar case: The privacy ruling was later used to challenge the government’s Aadhar scheme—on the grounds that it violated the right to privacy. But Chandrachud was outvoted in that 2018 ruling—which upheld the constitutionality of the Aadhar act. In his vigorous dissent in open court, he said: “Constitutional guarantees cannot be compromised by vicissitudes of technology.” Chandrachud objected to the “potential for surveillance”—arguing that the data could be used to profile citizens. And denying social welfare benefits to those without an Aadhar card is a violation of fundamental rights. FYI: legal experts like Gautam Bhatia have called it “a dissent for the ages.”

Decriminalising homosexuality: In 2018, a five-judge bench delivered a historic verdict that held the criminalisation of private sexual conduct between consenting adults as unconstitutional. Once again, the privacy ruling offered a key precedent:

“The court declared that once a nine-judge Bench has declared privacy to be a part of the fundamental right to life, nothing could stop the Supreme Court from upholding bodily autonomy and sexual orientation as fundamental rights too.”

In his separate concurring judgement, Chandrachud wrote that anti-homosexuality laws “denudes members of the LGBT communities of their constitutional right to lead fulfilling lives.” But speaking at a recent public forum in August, he also reminded his audience that the ruling in itself cannot guarantee equality to the queer community:

“The Beatles famously sang ‘All you need is love, love; Love is all you need’. At the risk of ruffling the feathers of music aficionados everywhere, I take the liberty to disagree with them and say—perhaps we need a little more than love… Structural changes as well as attitudinal changes are essential. Equality is not achieved with the decriminalisation of homosexuality alone but must extend to all spheres of life including the home, the workplace, and public places.”

Sabarimala case: Chandrachud also voted with the majority lifting the temple’s ban on the entry of women of menstrual age—noting that it violated Article 17 of the Constitution that prohibits untouchability.

The most recent rulings: was in the case involving AltNews co-founder Muhammed Zubair. Chandrachud was part of the bench that granted him bail—saying:  “Arrest is not meant to be and must not be used as a punitive tool because it results in one of the gravest possible consequences emanating from criminal law—the loss of personal liberty.” He also led the three-justice bench that recently expanded access to abortion to all women—married, unmarried and transgender (explained here).

Point to note: In his abortion ruling, Chandrachud also opened the door to recognising marital rape:

“Married women may also form part of the class of survivors of sexual assault or rape. The ordinary meaning of the word ‘rape’ is sexual intercourse with a person, without their consent or against their will, regardless of whether such forced intercourse occurs in the context of matrimony. A woman may become pregnant as a result of non-consensual sexual intercourse performed upon her by her husband. We would be remiss in not recognizing that intimate partner violence is a reality and can take the form of rape.”

Well, not everyone is happy with Chandrachud’s track record. For example, he voted with the majority in the Ayodhya ruling—which opened the door to constructing the Ram Mandir. He also helped quash the investigation into the suspicious death of Brijgopal Harkishan Loya—the judge in a key encounter case that named Amit Shah among its suspects. Sanya Dhingra in The Print writes:

“But this is not new for Chandrachud, who has swung from one extreme of the ideological spectrum to the other with confounding ease. While he may have been the saviour of India’s democratic values and the spirit of dissent for some, Justice Chandrachud himself has made no bones about not having any ideological loyalty, saying he would ‘better like to be known as a nationalist judge’. His job is ‘not to satisfy the conscience’ of either the NGOs or those in power, he had once said.”

But that’s the view of liberals. Others may be happy to have a “nationalist” CJI in charge—who is not committed to an ideological agenda.

The bottomline: A strong and independent Supreme Court is the bedrock of democracy. Let’s hope Justice Chandrachud can at the very least safeguard the institution—however strongly any of us may disagree with his decisions as CJI.

Supreme Court Observer has the basic deets about his career—while CNBCTV18 and The Hindu look at Chandrachud’s landmark judgements. The Telegraph and Mint praise him as a voice of dissent—while The Print is not so sure. Rahul Bajaj in Scroll writes about his experience as a blind man clerking for Chandrachud.