He was sworn in for the eighth time in 22 years—while RJD leader Tejashwi Yadav took the post of Deputy CM. The only thing surprising about the event was that Nitish seemed to rule out himself as a potential prime ministerial—saying he was “not a contender.” For more context: see our Big Story on the Bihari soap opera. In any case, we only included this item as an excuse to show you the clip below lol! FYI: that’s Lalu and Nitish. (The Telegraph)

Petrol pumps will offer petrol blended with 20% ethanol starting April, 2023—and its use will become widespread by 2025. Ethanol is made from sugarcane, rice and other plants—and helps reduce air pollution. The government expects the move will offer higher incomes to farmers, reduce our foreign exchange bill and greenhouse emissions. Also this: the Lok Sabha passed a new bill that sets out a minimum requirement for renewable energy use for corporations and residential buildings. And it penalises companies that do not use a minimum percentage of renewable energy. Associated Press has more details.

Beijing has ended the extended military drills around Taiwan—which were staged in response to US House Speaker Nancy Pelosi’s visit to the island nation. The visit enraged China as it endorsed the sovereignty of Taiwan—which it claims as part of its territory. And Beijing now says that further “training and war preparation” will continue.

The statement came soon after the release of a white paper setting out plans for reunification of Taiwan with the mainland. It advocates peaceful reintegration but declares “we will not renounce the use of force, and we reserve the option of taking all necessary measures.” The last such white paper was published in 2020, so timing matters. (The Guardian)

That whole $44 billion Twitter-buying deal may turn out to be a bad idea for Elon Musk. He has now sold Tesla shares worth $6.9 billion. The reason: he may have to buy the platform despite his best efforts to walk away from the deal if he loses the court case that is slated to start this fall. What Musk tweeted: “In the (hopefully unlikely) event that Twitter forces this deal to close *and* some equity partners don’t come through, it is important to avoid an emergency sale of Tesla stock.” We have all the context you need in this Big Story. (The Guardian)

Facebook: Ok, this one makes us a bit nauseous. Facebook turned over chat messages between a mother and daughter to authorities in Nebraska. The reason: The mum had got hold of abortion pills which she then gave her 17-year-old. She was 23 weeks pregnant. FYI: This has nothing to do with the reversal of abortion rights (explained here)—since the procedure was already illegal past 20 weeks in Nebraska.  But it is an example of cases that will become very common in the future. (The Verge)

Twitter: A Twitter employee has been convicted of spying for Saudi Arabia—handing over personal data of anyone critical of the government or the royal family. Why this matters: there is plenty of evidence that the Saudi Crown Prince Mohammed bin Salman has been using this kind of data to kill or silence dissenters (Bloomberg News)

This is what happens when you give a disease an old and inaccurate name. In Brazil, people are poisoning monkeys due to fear of the disease. At least 10 have died so far, while others are being beaten and stoned. It has spurred the WHO to issue a sadly needed clarification: “What people need to know is that the transmission we are seeing is happening between humans…People certainly should not attack the animals.” FYI, The disease was first documented in research monkeys in 1958—which explains its name. But, monkeys have very little to do with how the virus spreads. There’s more in our Big Story on the disease. (Deutsche Welle)

In other virus-related news: Medical experts are keeping an eye on a new disease that is transmitted from animals to humans. The virus is called Langya—and it has been detected in two provinces in China. The symptoms include fever, fatigue and a cough. So it’s not fatal or serious—but we’re more alert to this kind of stuff thanks to Covid. FYI: this is not the first outbreak—as the virus was first detected back in 2018. The good news: there are no fatalities. The most likely culprit in the jump to humans: shrews. (BBC News)

Hot nights can be lethal

A new study warns that rising temperatures at night can increase the mortality rate by 60% by the end of the century. And here’s why:

“More heat at night can disrupt sleep patterns as the body attempts to cool down, leading to adverse effects on the immune system. This could contribute to the probability of developing cardiovascular disease, chronic illnesses, inflammation and mental health challenges.”

Why this matters: in 28 cities across China, South Korea and Japan, nighttime temperatures between now and 2090 could double from an average of 20.4°C (68.7°F) to 39.7°C (103.5°F). Point to remember: the authors of the study warn that it would be inaccurate to extrapolate their results to the rest of the world—which would include India. (NPR)

Gotabaya Rajapaksa first ran away to Maldives when Sri Lankan citizens stormed the presidential palace—and demanded his exit. Then he went on to Singapore—where he emailed in his resignation. Now, he’s off to Thailand on a diplomatic passport that allows him entry for 90 days. According to Thai authorities, “The Sri Lankan side informs us that the former president has no intention for political asylum in Thailand and will travel to another country afterwards.” The likely reason for the relocation: Singapore refused to give him any special privileges or immunity. ICYMI: We did a Big Story on Gota’s flight out of Sri Lanka. (Reuters)

Saddest news about a stranded Beluga

A couple of months ago, an orca wandered into the Seine and finally died because he was already unwell. This time, French wildlife experts were determined not to let the tragedy repeat itself—with a 800 kg Beluga whale. But the rescue mission failed while they were trying to transport the whale to a salt water refuge—where it could be treated, and hopefully recover. Sadly, it had to be euthanised en route because it developed terrible breathing problems: “The suffering was obvious for the animal, so it was important to release its tension, and so we had to proceed to euthanise it.” You can see a clip of the daring rescue mission here. (The Guardian)

One: Did you know that in Haryana you cannot get your food rations—which is every needy citizen’s right—unless you buy an Indian flag for Rs 20? One woman had to give up part of her ration to pay for it (watch that video here). FYI: Now the state authorities have suspended the licence of the ration store owner—who says he got his orders from above. The union government has also issued a clarification that buying a tiranga is purely voluntary. (The Wire)

Two: Moving on to something more pleasant…which usually requires leaving the planet. While everyone is oohing over the new kid in town—the James Webb Space Telescope—good old Hubble has captured this dazzling image of a cluster of stars called NGC 6638. It’s as pretty as Diwali crackers without the smoke and pollution. (Space) 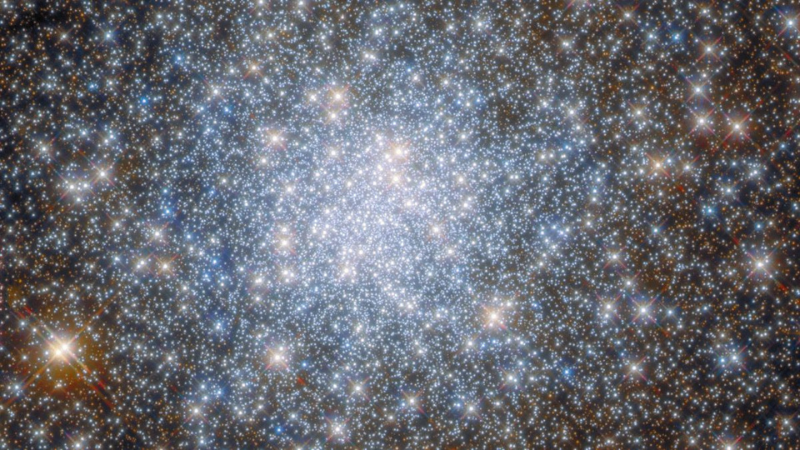 Three:  Here’s an only-in-India image—of a Kerala man who found a creative way to protest the ridiculous number of potholes on our roads. Y’know what they say about life handing you lemons… But, but, but: not to trivialise this, he is actually raising awareness about a man who died because he fell into a pothole and was run over by a truck. You can see what happened when the local MLA showed up below. (NDTV)