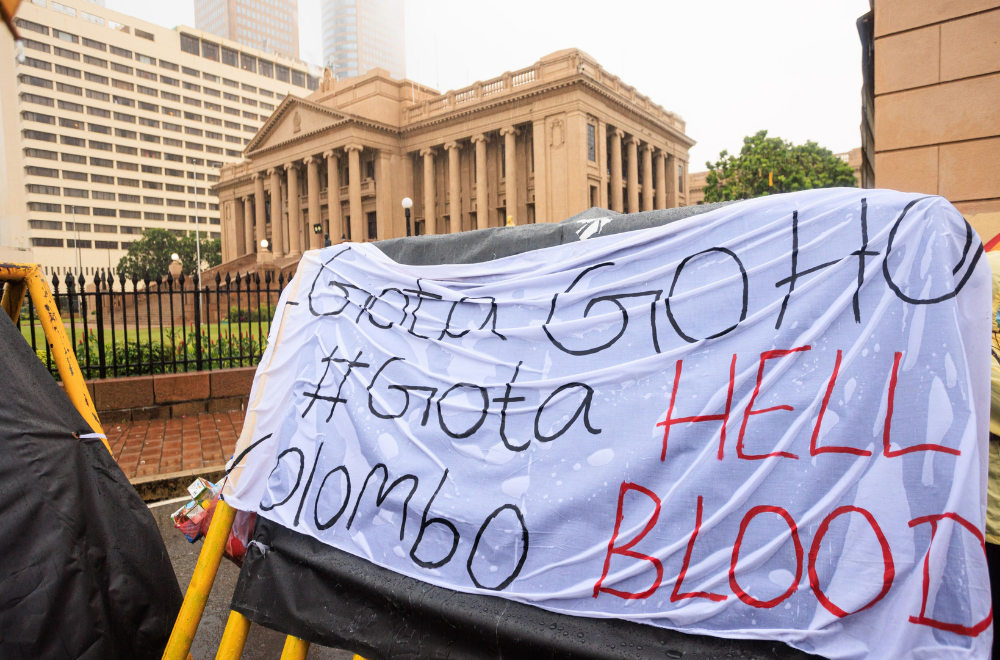 In an unprecedented show of popular rage, hundreds of thousands of Sri Lankans swarmed Colombo to evict their president and prime minister. But there is no clear path out of this crisis—as both the military and opposition struggle to maintain stability.

The lead up: A quick recap

The Sri Lankan economy lies in tatters—primarily due to unforgivable mismanagement by the Rajapaksa brothers: President Gotabaya and Prime Minister Mahinda.

The collapse: The island nation is heavily reliant on imports to meet its basic needs. The country imports everything from sugar to wheat, dairy products, milk powder and medical supplies. So it needs foreign exchange to pay for essentials—which it does not have. The government owes $51 billion in foreign debt—and has no money for even interest payments. On Thursday, it officially defaulted on its international loans. It has only $25 million in usable foreign reserves. The currency has plummeted to 360 to a dollar—making imports even more unaffordable.

The crisis: The nearly bankrupt country is teetering on the edge of a massive humanitarian disaster. Food prices shot up by 80% in June alone. Just an apple costs Rs 200. According to the UN, nearly nine out of 10 families are skipping meals or otherwise skimping to stretch out their food—while 3 million are on emergency humanitarian aid. The government was forced to shut down schools due to a severe scarcity in fuel. It already owes $800 million to fuel suppliers—and is struggling to pay an additional $587 million to buy new stocks.

The reasons: We’ve done two Big Stories on the economic crisis in Sri Lanka, first in September and then in March. Here’s a quick overview of the underlying causes:

The Gotabaya factor: An already vulnerable economy was pushed over the edge by Rajapaksa’s policies:

The big wave of protests

The lead up: The protests first began in March in rural areas—and soon swept across the country. The most prominent symbol of popular rage was the “Gota Go” village—a tent city of protesters set up at the Galle Face in Colombo, outside the president’s offices. PM Mahinda Rajapaksa tried to use goons to dismantle the campsite—but the backlash was so severe that he had to resign instead. He was replaced as PM by opposition leader Ranil Wickremesinghe––who took the job in a compromise intended to keep Gotabaya in power.

The tsunami: On Saturday, thousands descended on Colombo in a massive protest. As the numbers swelled, the police used tear gas and water cannons and fired shots into the air—but to no avail. The crowds eventually stormed the presidential palace:

And the most bizarre scenes ensued:

“They did flips into the pool. They lounged on canopied beds. And on wide-screen televisions, they watched cricket and news footage of their fellow protesters… A few people cooked curries and snacks for the protesters, while others showered in the bathrooms or posed for photos at desks.”

Point to note: Wickremesinghe was not spared—as crowds set his residence on fire. Crowds also climbed the walls of the Galle Fort—where a cricket match against Australia was underway (see that here).

The fallout: Neither Rajapaksa nor Wickremesinghe were at their residence during the protests. Both have gone into hiding—and have not been seen in public since. There were clips of navy ships being loaded with Rajapaksa’s luggage, but there is no official confirmation as of now. Both have agreed to resign, as well—with Rajapaksa communicating his decision to the Parliament Speaker.

What’s next: The road ahead

The interim government: Sri Lanka’s Opposition parties have decided to form an all-party interim government—and both Rajapaksa and Wickremesinghe will quit on July 13. The Parliamentary Speaker will likely act as the interim president—until the MPs elect a new one. The winner will complete the two years left in Rajapaksa’s term.

The catch: It is hard to see how the MPs will select a consensus candidate—who will also be acceptable to the public. Making it even trickier: Rajapaksa’s party still holds a majority in parliament. Without their cooperation, the new president’s position will remain insecure. Analysts are also sceptical as to whether any one person can appease an enraged citizenry overnight:

Something to watch: The army has been more vocal in the wake of the chaos—with General Shavendra Silva issuing appeals for calm. He is a key ally of the Rajapaksas—and was appointed chief of defence staff last month.

Farewell, Rajapaksas? Even Silva may not be able to save Sri Lanka’s powerful dynasty. With Gotabaya’s exit, there is not a single Rajapaksa in power. In a past interview, Mahinda quipped: “People keep voting Rajapaksa family members [to power]. What can I do? When they do not wish to see them anymore, they will kick them [Rajapaksas] out.” Words that appear to have become a self-fulfilling prophecy.

The IMF loan: Above all, Sri Lanka needs a stable government to negotiate with the International Monetary Fund—and implement its policy recommendations. Colombo requires $6 billion through the end of the year to buy fuel and other essentials—and the $3 billion bailout is critical.

The bottomline: Everyone agrees that the Rajapaksa’s replacement has an unenviable and “hazardous” job:

“The many pitfalls ahead could include decisions to be made on whether or not we go for an IMF-backed debt rescheduling or will we simply decide to be a pariah state and simply stop acknowledging our debt to the rest of the world, and seek refuge in geopolitical gamesmanship by requesting help from other nations who are not in the mainstay of global economics.”

All tough calls and none with any assurance of success.

Al Jazeera has the best overview of the recent developments—and what’s next. Associated Press has a good explainer to the economic crisis. New York Times offers a photo gallery of the protests. The Washington Post charts the Rajapaksas’ rise to power—while The Diplomat and France24 look at their downfall. For details on Sri Lanka’s economic crisis, read our past Big Stories here and here.