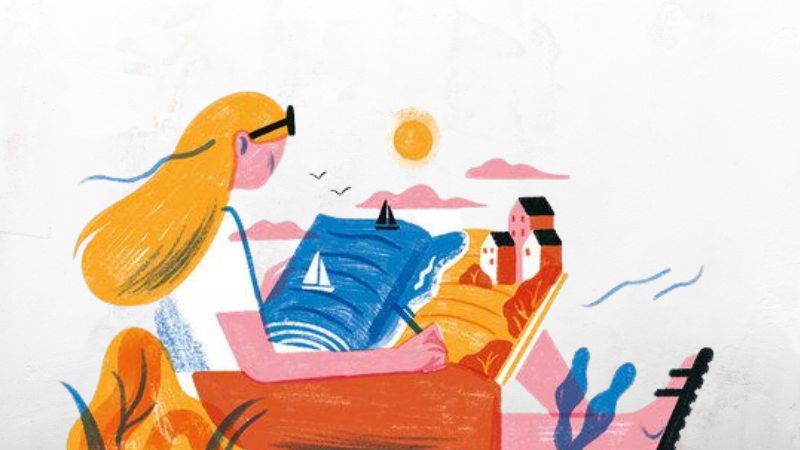 August, for me, has always brought with it a sense of newness and change, possibly due to the onset of monsoon (my mood turns with the weather). I’m not too pleased about the humidity, but I am reading a lot more, and many of my books are so atmospheric that the overcast skies make for the perfect setting in which to read them. What are some of your favourite atmospheric reads—books that transport you to their setting? I’d love to know, but before that, some bookish links for you to peruse.

One: Who among us hasn’t wanted a meet-cute at a bookstore? On LitHub, author Susan Coll chronicles how she began living her life with a renewed spirit at the age of 52 when she started working at a bookstore and, in the process, pays homage to the perfect atmosphere the place creates for some heart-eyes, butterflies and falling in love.

Two: Also on LitHub, author Alexandra Lapierre describes her mission to recreate the life of little-known tour de force, Belle da Costa Greene, a Black librarian who decided to pass off as White in the early 20th century. Greene was an extraordinary woman who chose a life of freedom and had an unparalleled love of books, but who left next to no papers with any information about herself, destroying them in a fire. It’s a fascinating read.

Three: In New York Magazine, a deep-ish dive into the entertaining world of real and fake books turned into props to be used in promotional pictures online and off. It’s a right romp around the world, beginning with an American photographer in a Seoul bookshop and travelling to a “Singaporean e-commerce platform that’s like a Southeast Asian Amazon” and fake-book factories in China.

Four: In the Guardian, Sarah Perry, author of ‘The Essex Serpent,’ recounts her experience being on set for the filming of the TV show based on her book, and how emotional the entire process of adaptation was for her. “That the story I’d written in a small, cold room in a Norwich terrace would one day be accorded such extraordinary care by so many people was remarkable.”

Five: I wouldn’t be the person I am today if it weren’t for the fantastical tales of ghosts and detectives, intrepid children and kind adults I was told by my grandfather when I was a child, especially at bedtime. In Outside, a sweet ode to the lasting power of campfire stories and how to tell them effectively.

Six: “She’s a 10, but. . .” is one of my favourite recent memes, and its literary variety is absolutely *chef’s kiss*. In Book Riot, a collection of some of the best of them. No surprises that Austen and Bronte fit so well in this format.

Currently reading: ‘Faithful Place’ by Tana French. Reading French always feels like coming home (no matter the dark subject). She is perfect—a claim I don’t make lightly and never make without caveats. This one stars Frank Mackey, a peripheral character in French’s previous instalments in the Dublin Murder Squad series, who is dragged back to his hometown to solve the 22-year-old disappearance of his teenage sweetheart. Mackey is a fantastic character, a bit of a smartass but genuinely invested, intelligent and determined.

Bookish adaptation: I have two excellent offerings for you this week. One, that I’ve finished watching, is ‘Black Bird,’ based on ‘In with the Devil: A Fallen Hero, a Serial Killer, and a Dangerous Bargain for Redemption’ which is a true story by James Keene and Hillel Levin. What a tense ride this prison drama was. Excellent performances from the two leads: one playing a serial killer whose crimes cannot be traced back to him, the other a drug dealer who must get a confession from the former for a reduced jail sentence.

The second adaptation, of course, is ‘The Sandman,’ based on one of the most popular comic book series of all time by Neil Gaiman. I am four episodes in and actually loving it. The Sandman has been known to be notoriously difficult to film due to its unique structure, but the TV show, fortuitously helmed by Gaiman himself, pulls it off admirably.

Book adjacent rec of the week: You’re in for a treat. I discovered Jose Naranja a few years ago and have been a devout follower of his Instagram account ever since. Naranja, an artist, is also a “notebookmaker”. An inveterate traveller, Naranja has been filling pocket-sized notebooks with ideas, experiences, observations and myriad thoughts—all done in gorgeous calligraphy and stunning illustrations. This article in the Modern Met gives an insight into his beginnings and his process, and every last bit is fascinating, beautiful and quite aspirational.