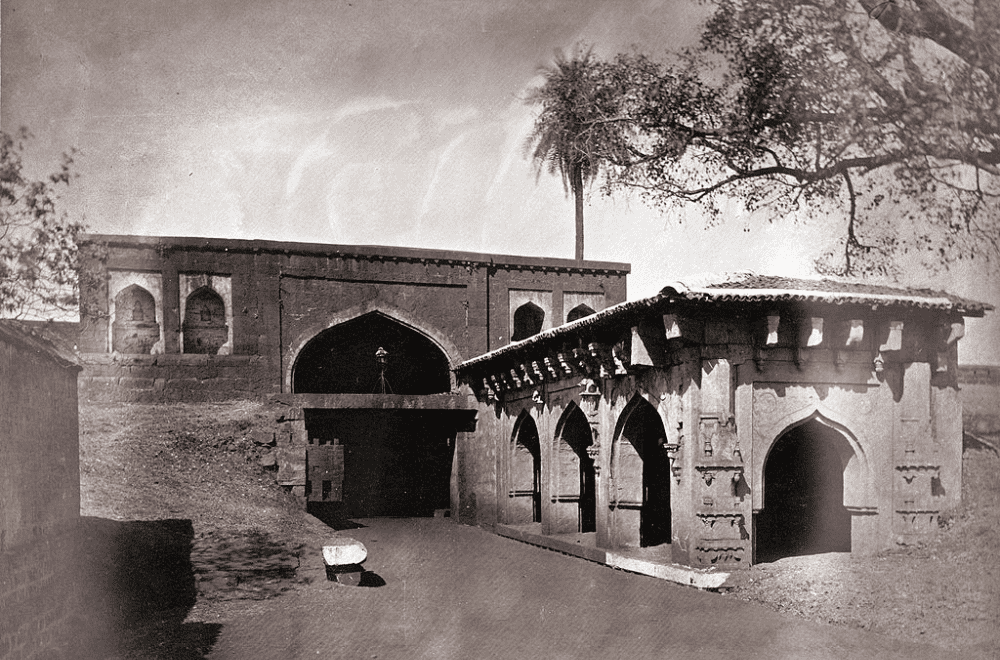 Since India achieved independence, Karnataka and Maharashtra have been fighting over this border town—which is also the perfect example of our rich multilingual tradition. But heritage means little when state elections are around the corner. This winter, the city has once again become a lightning rod for violence and controversy—and, now, a hot potato for the BJP.

Editor’s note: The lead image is of the Belgaum Fort, built in 1204 and most recently notable for serving as a prison for Gandhi-ji during the freedom movement.

A history of Belagavi aka Belgaum

Belgaum has long been a prosperous urban centre—thriving under the successive rules of Maratha and Muslim rulers. When the British came along, it was incorporated into the Bombay Presidency in 1818—governed by the Poona commissioner. It has always been a diverse, multifaith town—attracting immigrants from as far as Rajasthan.

Belgaum changes hands: In 1956, the government passed the States Reorganisation Act to redraw state borders along linguistic lines. The state of Mysore—later known as Karnataka—was carved out of the Bombay Presidency (soon to be Maharashtra). And it took Belgaum with it.

The reason: The 1881 census—which showed that 64% of its residents spoke Kannada—and only 26% spoke Marathi. But by the time of the 1951 census, Marathi speakers outnumbered their Kannadiga peers. Maharashtra immediately objected—and staked its claim to 7,000 square km of the area—including 814 villages and three towns: Belgaum, Nippani and Karwar. And Karnataka unsurprisingly rejected its claims.

You can see where Belgaum is located below: 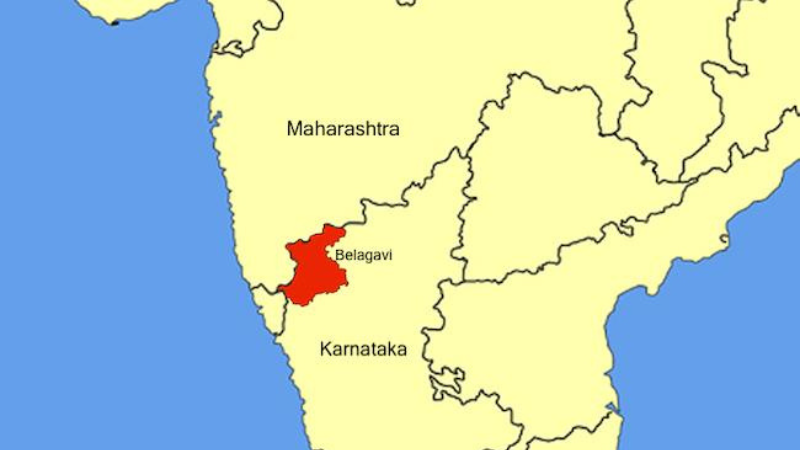 Point to note: The diversity of Belgaum has long been a sore point for politicians—but rarely for its residents. It reflects the broader and deeper entanglement between Marathi and Kannadiga cultures. Linguistic expert GN Devy writes:

The tradition of bilingualism has been an essential element of the culture of the area. The castes and communities on both sides of the disputed border have their extended families spread on either side of it. The situation has been so all through the history of Kannada as well as Marathi.

The leading lights of the Kannada cultural establishment—such as Girish Karnad or Bhimsen Joshi—have been natural speakers of Marathi and vice versa.

A long and bitter dispute: In 1966, the union government made its first and only effort to settle the row. It appointed the Mahajan Commission under former Chief Justice Mehr Chand Mahajan to determine the merits of the competing claims. The commission tried to split the proverbial baby in two—awarding 264 villages to Maharashtra and 247 villages to Karnataka. But Karnataka would also get to keep the biggest prize: Belgaum. Maharashtra dismissed the recommendations as “biased and illogical”—while Karnataka insisted the matter was now finally settled.

FYI: The report was also tabled in Parliament in 1970 but never debated. No union government has implemented its recommendations—irrespective of the party in power.

From Belgaum to Belagavi: To seal its victory, Karnataka changed Belgaum’s name to Belagavi in 2014. And in 2012, it inaugurated a second state legislature building—Suvarna Vidhana Soudha—in the city. Since then, the winter session of the legislative assembly is always held there. The session inevitably draws the ire of the local Marathi groups—and that of the ruling government in Maharashtra. Hence, Belagavi always experiences a winter of simmering discontent each year.

The Supreme Court case: As with any political dispute in India, the highest court has been dragged into the fray. Though it has been every bit as unenthusiastic about getting involved as the union government. Maharashtra filed a petition back in 2004 challenging the States Reorganisation, but the matter still has not been heard. The two states can’t even agree on whether the Court has the right to intervene. According to local Kannada activists:

Under Article 3 of the Constitution, only the Parliament has the power to decide on state borders or transfer the areas. They (Maharashtra) have challenged the decision 50 years later. Our stand is that the Supreme Court has no jurisdiction in the matter, the plea is not maintainable, and it should be rejected.

But, but, but: Legal experts disagree.They say the Court can indeed decide whether Maharashtra’s rights have been violated. But the ball will inevitably end up in Parliament’s court. It will have to determine where to draw the new borders—if any.

FYI: While the Eknath Shinde government is enthusiastically assembling a top-notch legal team, the Court continues to drag its feet. It was supposed to hear arguments on November 30—but has since postponed proceedings without setting a new date. Apparently, the justices were busy determining the constitutional merits of Jallikattu—the traditional practice of bull-fighting in Tamil Nadu.

No one expects the Belagavi matter to be resolved after 70-odd years of political drama.  The town’s primary value today is as a political weapon—more so with the Karnataka elections slated for May, 2023. This is why both sides have been sabre-rattling for the past month on the border:

The BJP dilemma: The party is in power in both states and in New Delhi. And it can’t afford to upset the Karnataka apple cart with elections around the corner. As a result, Amit Shah has been uncharacteristically diplomatic. He’s urged both sides to wait for the Supreme Court ruling—which he knows will not be arriving any time soon.

FYI: The Congress has been just as subdued—since it can’t afford to annoy its opposition alliance partners in Maharashtra or jeopardise its prospects in the elections. And it followed the exact same playbook as the BJP when it was in the same situation—ruling in the two states and the Centre.

The Shinde dilemma: Shinde's greatest task is to establish the legitimacy of his breakaway Shiv Sena faction—which restored BJP to power in Maharashtra (explained here). And his nemesis Uddhav Thackeray is determined to dial up the heat:

Karnataka has been asking for our areas, villages and even Jath, Solapur will they ask our Pandarpur Vithoba too? This raises one question-is there any government in Maharashtra? Like before the Gujarat elections, some businesses were shifted there, so before the Karnataka elections will our villages be given to Karnataka?

Shinde is accused of being a traitor—used by the BJP to bring down the Sena. Agreeing to Amit Shah’s advice to dial it down would only confirm his role as a patsy.

The biggest prize: in this fight is not Belagavi but Bangalore. The state BJP could possibly use the issue to divert attention from far serious allegations of wrongdoing—including a Votergate scandal where thousands of residents were deleted from the voters’ list. It could also silence the other parties at the critical winter session:

At this juncture, the Belagavi border issue will apparently help the BJP during the winter session as there will be a unanimous voice, cutting across party lines, against Maharashtra during the debate on the dispute. All parties, willingly or unwillingly, will have to support the state against Maharashtra on the Belagavi issue as it has strong emotional connect with the Kannadigas.

But, but, but: Belagavi will not win BJP the elections—especially given Congress’ strong performance in the 2021 municipal elections. And the party has to contend with Congress’ regional ally Janata Dal (Secular)—which can happily take a far more strident stance on the border than Bommai would ever be allowed. JD(S) now also has the support of the influential Karnataka Rakshana Vedike (KRV) in Belagavi:

We are not happy with the BJP, because they should have prevented the Maharashtra politicians from disturbing the peace in Belagavi. If JD(S) supports the Karnataka side vociferously, we will recommend our followers to support them electorally.

OTOH: The other powerful political party in Belagavi is Maharashtra Ekikaran Samiti—which has the support of all the Maharashtra parties. It recently lost electoral ground to the BJP in the region, but the border issue may be its chance to reassert its power in 2023.

The bottomline: The BJP did not win the previous Karnataka election in 2018. It is solely in power thanks to the defections of Congress MLAs. This state election will be the first real test of its popularity. And it would much rather be talking about the burkha—i.e the Uniform Civil Code—than Belagavi.

Firstpost and News9 offer a solid overview, while The Quint looks at the legal angle. Indian Express has more on the linguistic diversity of Belagavi and the role of MES. The Federal and The Quint taking opposing views on the political benefits to the BJP. The Print explains why the hands of national parties are tied. Most interesting is this Prem Panicker analysis on why Karnataka will be a challenge for the BJP.