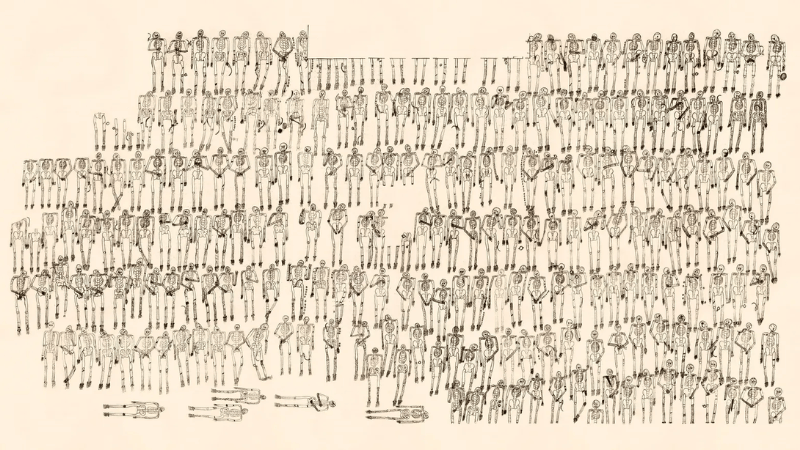 One: The Sacred Band was a fearsome military unit of three hundred male warriors who defended the Greek city of Thebes. They were wiped out at the Battle of Chaeronea in 338 BC by none other than Alexander the Great and his father. But here’s the truly curious fact about this elite fighting force: the Band was composed entirely of lovers—hundred and fifty couples, to be precise. And their love was thought to be the secret of their fierce valour, according to the ancient Greek historian Plutarch:

Tribesmen or clansmen do not feel any great concern for their kinfolk in time of danger, but a band which is united by the ties of love is truly indissoluble and unbreakable, since both lovers and beloved are ashamed to be disgraced in the presence of each other, and each stands his ground at a moment of danger to protect one another.

Their mass burial site was discovered in 1818—and the lead image is the recreation of the original drawings by illustrator Markley Boyer. As you can see, a number of them are holding hands. This World History essay has the most details on these men. (New Yorker)

Two: The delightful Bulwer-Lytton Fiction Contest challenges its contestants to compose opening sentences to the “worst of all possible novels.” The winners are picked by a Panel of Undistinguished Judges—who have unerringly bad taste:)  This year’s grand prize winner:

I knew she was trouble the second she walked into my 24-hour deli, laundromat, and detective agency, and after dropping a load of unmentionables in one of the heavy-duty machines (a mistake that would soon turn deadly) she turned to me, asking for two things: find her missing husband and make her a salami on rye with spicy mustard, breaking into tears when I told her I couldn't help—I was fresh out of salami.

Though we are just as fond of this entry that topped the Children's & Young Adult Literature category:

Three bears arrived at their den to discover a yellow haired girl sleeping, and as she was neither too hot nor too cold, neither too soft nor too hard, but just right, they ate her.

Three: Fad diets are a gift that keep on giving—though not necessarily to their followers. The latest is called ‘The Lion Diet’—and involves nothing but meat, salt and water for 30 days. FYI: you can only eat meat of “ruminant” animals—like cows, goat, bison, and deer. No chicken allowed! Of course, the good folk on social media insist that it cures everything from allergies to headaches and bad skin. Of course, almost every nutritional analysis concludes it is a terrible idea: “In addition to being high in saturated fat, it’s unsustainable and likely to lead to nutritional deficiencies.” Get a sense of the lunacy below. (Healthline)