England decimated India in a 10-wicket victory that is sure to hurt for a very long time. We are out of the World Cup—and will be reduced to cheering for our fellow South Asians Pakistan from the sidelines on Sunday. Yes, our top order batting was crap—and even Virat Kohli’s 50-run knock didn’t help. Neither did Hardik Pandya’s 63 runs off just 33 balls. There’s been plenty of ink spilled on what went wrong. The most prominent theme—the super-stars have got to go. The Telegraph asks why the biggest boys go MIA when needed. Indian Express makes a case for sacking the opening three—Rahul, Kohli and Sharma—from the T20 side. Scroll has more on the match—and why everything was lost in the powerplay.

Gautam Navlakha was finally allowed to go home on medical grounds. He didn’t get bail but will be kept under ‘house arrest’ in a Mumbai flat—where he won’t have access to the internet or a personal phone. The 70-year-old has been behind bars since 2018 in connection to the Elgar Parishad case (explained here). The Supreme Court said in its ruling:

“He is a 70-year-old man. We don’t know how long he will live. Certainly, he is going towards the inevitable. It is not that we are going to release him on bail. He is not going to enjoy the default bail which comrade Sudha (Sudha Bharadwaj) got (the NIA had failed to file the chargesheet against her in time).”

A pity there was no one to offer even this reprieve to Stan Swamy—the 84-year-old activist and fellow suspect who died in prison without bail or a trial. (The Hindu)

A Dubai businessman Murari Lal Jalan and Kalrock Capital are the leading investors in a consortium that plans to revive Jet Airways (more details here). There have always been questions about the seriousness of their intent. And now there is a new wrinkle: properties of Kalrock chief Florian Fritsch have been raided by prosecutors in Liechtenstein, Switzerland and Austria. We don’t know the reasons for the raids as yet. But it raises fresh doubts about Jet Airlines’ return since the Jalan-Kalrock consortium has missed the deadline on two key payments. CNBCTV18 has that story. (Mint)

The company has been under fire ever since it turned the verification badge into a perk you can buy for $8. One big criticism: people who buy the badge don’t undergo any kind of authentication process. There is new evidence that the hasty change—a pet project of Elon Musk—may have been a mistake. It is now dealing with a wave of celebrity and corporate impersonators who have quickly gamed the new system. These include fake handles for Nintendo, Donald Trump and LeBron James. And the platform is struggling to shut them down. When asked about this flaw in a Twitter Spaces conversation, Musk argued that each account needs a credit card and phone number—which is a sufficient deterrent. The reason: “Even wealthy bad actors such as state-sponsored disinformation agents would eventually be deterred because they may run out of credit card and phone numbers.” Hmm. (CNN)

The great power of meditation

A new study compared the effects of meditation with medication in reducing anxiety—and found that it is almost as effective. Participants either underwent an intensive eight-week mindfulness meditation program or took the popular anti-anxiety drug escitalopram. And both worked just as well—except meditation did not have any of the usual side-effects of anti-anxiety drugs, such as diarrhea, nausea, and loss of sexual desire. But there are some caveats. Researchers say medication is still key to providing urgent and immediate relief—for example, during panic attacks. And not everyone has the time and resources to undergo an intense meditation program. (NPR)

The 85-year-old Hollywood legend is being sued by a woman who claims he raped her back in 1973—when she was around 15 years old:

“Hirsch, who now lives in Louisiana, alleges that Beatty met her on a movie set, where he paid ‘undue attention’ to her, commented on her looks and gave her his phone number. She alleges that Beatty called her numerous times in 1973, invited her to the hotel where he was living and brought her on car rides.”

Beatty allegedly went on to coerce her into having sex with him. Point to remember: a new California law opened a three-year window for claims of child sexual abuse that have otherwise passed the statute of limitations. That window expires on January 1, 2023. (Variety)

In quirkier celebrity news: Rainn Wilson—famous for playing Dwight on ‘The Office’—has changed his name to protest climate change. You can now call him Rainnfall Heat Wave Extreme Winter Wilson. Before you start giggling, Wilson wants you to know that “this is not a joke, I’m as serious as the melting Arctic, which amplifies global risks including extreme weather events around the globe.” FYI: He used something called the Arctic Risk Name Generator to pick his new name—and urged others to do the same. C’mon, you can do it! Watch his video announcement below.  (The Hollywood Reporter)

Steve Jobs: A pair of nasty old Birkenstock sandals worn by Steve Jobs are going up for auction. They were apparently worn by him back in the 70s and 80s—and rescued from the garbage by his chef. The expected going price: $60,000 to $80,000. Really? Just look at them! (Gizmodo) 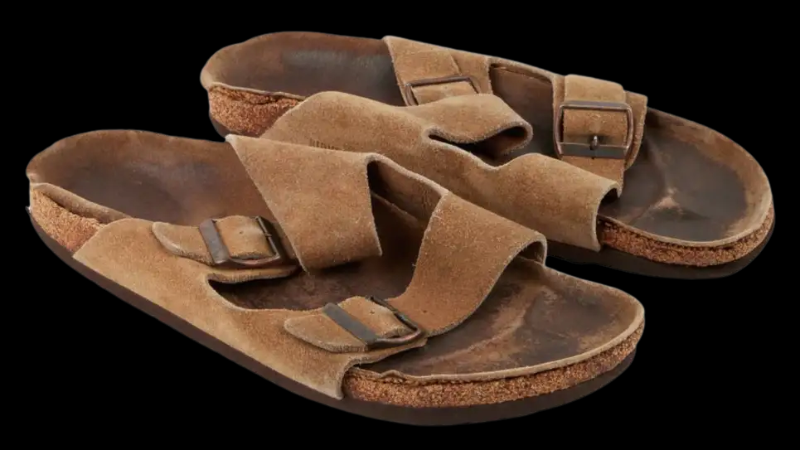 One: Sean Penn temporarily gave his Oscar to Ukrainian President Volodymyr Zelensky as a “symbol of faith”—saying, “When you win, bring it back to Malibu. Because I'll feel much better knowing there's a piece of me here." (Sky News)

Two: A rare and astonishing video of a giant octopus giving a Canadian diver a hug is going viral. She said later of the encounter:

“It was just crawling on my camera, crawling on my lips, giving me a hug. These huge tentacles were up over my face and mask. Every time I backed away from it, the octopus just kept coming towards me. And it was just so amazing and inspiring.”

Umm, this is lovely but we wouldn’t want to be in her diving shoes any time soon. (The Guardian)