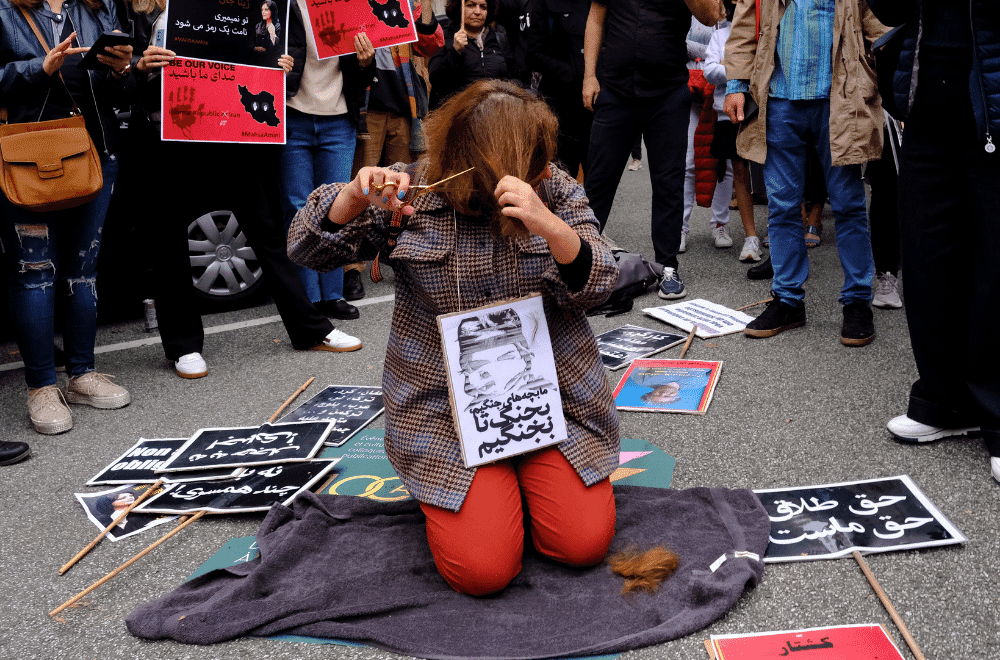 The raging protests in Iran: An extended update

Nearly two months later, the protests have refused to die down despite a bloody crackdown. We revisit the growing rebellion—if only because so many have stopped paying attention—even though ordinary Iranians are risking their lives to keep the fires burning.

Where we are now

It all began when a 22-year-old woman Mahsa Amini—arrested for wearing her hijab “improperly”—was killed in police custody (explained in our previous Big Story). Angry women came out on the streets—burning their veils and cutting their hair in defiance of strict Islamic rules. The crackdown was swift and brutal.

The numbers: It is impossible to get definitive numbers given the extent of government censorship. But the latest update from human rights groups estimates that at least 304 people have been killed—including 41 children and 24 women. Another 14,800 have been arrested—including journalists and activists.

The many ‘Mahsa Aminis’: A number of young women have been killed by security forces. They include Nika Shahkarami—a 16-year-old who shared a video of herself burning a scarf. She went missing within a couple of hours—and her body surfaced a week later. Authorities claim she was thrown from the roof of an abandoned building—but her death “had no connection to the protests.” This was Nika Shahkarami: 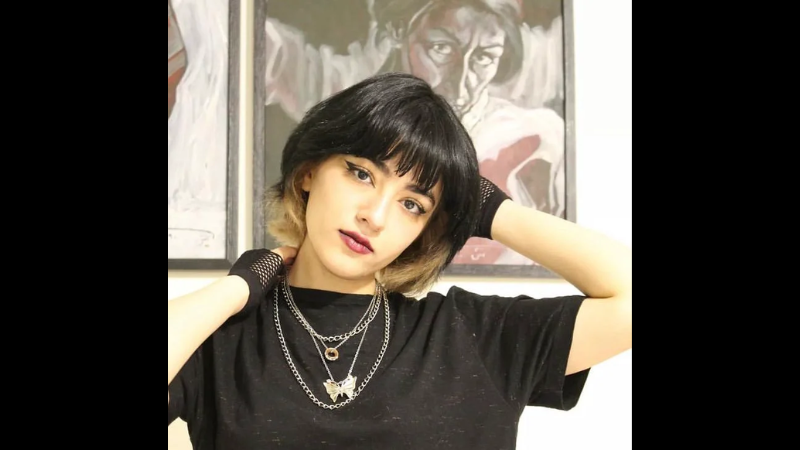 Twenty-two-year-old Hadis Najafi recorded a video of herself at a protest, declaring: “I hope in a few years when I look back, I will be happy that everything has changed for the better.” She was found dead an hour later with gunshot wounds to the heart, stomach and neck. This is her last video:

The 16-year old video blogger Sarina Esmailzadeh went out to protest and died from severe blows to her head. The authorities insist she took her own life by jumping off a building. See her singing Hozier’s ‘Take Me to Church’—a protest song aimed at the Catholic Church in Ireland.

Point to note: The Iranian parliament recently passed a resolution recommending the death sentence for protesters in custody—to offer a “hard lesson” to those who break the law.

Quote to note: The ruthless repression, however, may be adding fuel to fire. It is not cowing down the protesters but hardening their resistance, as one journalist notes:

“‘Their reactions have fuelled the protests more and more,’ said Omid Memarian, an Iranian journalist and analyst based in the United States. ‘The regime has a ‘playbook’ on how to stop any demonstrations, he says, but this time it has not worked against a more determined crowd. ‘The Iranian government does not get it.’”

The movement: Spreading beyond women

Women remain at the forefront of the uprising—but the protests have now spread to new parts of the citizenry—sparking hopes of a broader movement.

The professionals: Doctors and lawyers have now entered the fray. Lawyers are protesting outside courthouses—against the harsh sentences being handed down to demonstrators. Doctors are up in arms because security forces are using hospitals to track down and arrest them—and forcing medical staff to act as informers. They are also using ambulances to transport detainees.

As a result, hundreds of doctors gathered outside Iran’s Medical Council in Tehran on October 26 to take a stand—and were shot at by the police: “They used shotguns [with pellets], batons and tear gas without any limitation. They beat a young woman dentist and an old physician about 70 [years old] on their heads and they fell on the ground.” At least one doctor—Parisa Bahmani—was shot in the head. The Iranian Medical Association later claimed she died in a car accident.

See a clip from the scene below:

The athletes: They may not be significant in numbers, but their support has great symbolic value. After winning an international beach soccer cup, the entire team refused to sing the national anthem at the awards ceremony. And team member Saeed Piramoon mimed cutting his hair—in a powerful nod to similar gestures by Iranian women:

Point to note: The uprising has also become a sticking point in the lead up to the football World Cup to be held in Qatar this month. Legendary coach Jalal Talebi has refused to be a commentator for the games—while popular star Mohammad Motamedi turned down the opportunity to be the team’s official singer—saying “under the circumstances, I don’t even feel like talking, let alone singing.”

There are reports of deep schisms within the national team, as well:

“[T]he team’s star forwards, Sardar Azmoun and Mehdi Terami, got into a heated argument in September at a training camp in Austria. The dispute reportedly took place after Azmoun posted on Instagram that ‘national team rules’ suppressed players from expressing their views about the national protests, while also saying that he was willing to ‘sacrifice’ his place in the World Cup ‘for one hair on the heads of Iranian women’.”

Azmoun, however, scrubbed his Instagram feed—revealing the intense pressure on players to toe the line. But Tehran is already worried about shows of solidarity—by team members, rival nations and crowds—at the World Cup.

The oil workers: This constituency poses the greatest threat to the establishment—which relies entirely on oil revenue to fund its machinery. Oil workers joined the protests in early October—with marches and demonstrations in key hubs of the industry. More recent reports in independent Iranian media indicate that employees in at least 37 oil rigs in the south have gone on strike. The newest entrants: steel workers.

Why this matters: Apart from Iran’s great dependence on oil revenue, the timing is important:

“Another disruption in the oil sector would come at a particularly bad time. The regime is hoping to capitalize on Western sanctions against Russian oil sales to meet demand in Europe — if, that is, it can get the Europeans to persuade the Biden administration to ease sanctions on Iranian supplies. A strike will hamper those hopes, and more repressive measures will dampen any European enthusiasm to advocate on the regime’s behalf.”

Also, a successful revolution is impossible without their participation:

“Strikes that could further damage the economy, particularly those called by the unions representing the bazaar merchants and the oil and energy sector, carry a heavy weight in Iran’s history. During the 1979 Islamic revolution, strikes in those sectors were a powerful tool that accelerated the Shah’s collapse.”

FYI: There is no sign of the bazaar merchants joining the uprising—although citizens are threatening them with a boycott if they do not go on strike.

Does any of this matter?

Well, as encouraging as the signs may be, previous protests were far greater in numbers and more widespread. And a number of factors that create great excitement in the West have far less impact on the ground. Even so, there are signs of hope.

Social media: The BBC News, for example, is just one of many media outlets celebrating the many hashtags, clips and songs that have come to define the movement. But as the Washington Institute points out, there is a good reason that the government has not yet shut down social media access. To begin with, these platforms offer just as much help in tracking and identifying protestors. The regime has also been using them as propaganda tools. Above all, it also knows that social media storms rarely propel on-the-ground change.

Point to note: The uprising is also powered by young people for whom social media is a powerful tool of expression and action. So the government’s calculations may well be wrong.

A leaderless movement: The uprising does not have any prominent faces—or spokespersons. It's a thousand-headed hydra that cannot be vanquished by targeting key leaders—as the regimes have done in the past. It also carefully steers clear from calling for a broader agenda:

“Instead the organisation is horizontal, with hundreds of small and disparate social-media networks. They gather along main roads, not at junctions, where the riot police lie in wait. Experience has taught them that ambitious manifestos in so complex a country can be divisive. So their demands, circulated in slogans and on social-media platforms (particularly Telegram), tend to be limited to calls for the release of students from jail, the trial of security men responsible for killing protesters, and the sacking of teachers who have snitched on them.”

A divided establishment: The protests have now spread to the most religious parts of the country—reflecting a schism even within conservative Iranians—who form the regime’s core base: “Many religious Iranians are appalled by the corruption as well as the violence perpetrated in the name of their faith.” More importantly, none of them are rising up in its support. Even within the power elite, there is a “striking silence”:

“Despite Mr Khamenei’s call to denounce the protests, none of the former presidents has spoken up. Criticism of Mr Khamenei’s slow and rigid responses is growing in official circles. Seminarians and Islamist reformists have condemned the regime’s recourse to violence. A former long-serving speaker of parliament, Ali Larijani, has urged the regime to relax its enforcement of the hijab. The sports minister hosted a female climber who recently competed in Korea without a veil, wearing a hoodie and cap instead.”

“The hijab has a cultural solution, it does not need decrees and referendums. I appreciate the services of the police force and Basij [paramilitary militia], but this burden of encouraging the hijab should not be assigned to them… Do not doubt that when a cultural phenomenon becomes widespread, rigid response to it is not the cure.

But, but, but: Most experienced observers don’t think any of these factors are sufficient to lift the regime’s iron boot. More so since the Islamic establishment is readying for a change of guard:

“As it happens, the supreme leader’s age and much-rumored health make any concession rather unlikely. In office for over thirty-three years, Ayatollah Ali Khamenei has spent the past years making sure that the system will survive his death. Allowing the hardline takeover of all branches of government with last summer’s staged election of President Ebrahim Raisi—who duly tightened the Islamic dress code this August—was intentional, not a misstep about to be corrected.”

The mullahs are in no mood to compromise—which has often proved disastrous for other totalitarian regimes. Example: Mikhail Gorbachev and the Soviet Union.

The bottomline: History can teach us many things—and can just as easily mislead us. Only in hindsight will we know whether this rebellion carries the seeds of a revolution. Until then, we hope and chant in solidarity: “zan, zindiqi, azadi” (women, life, freedom).

The Carnegie Institute and Economist have the best analysis of the future of the uprising. The Guardian has a must-read on how the hijab is dividing the conservative establishment. Washington Post is best on the significance of the oil worker protests. BBC News has more on the use of social media—while the Washington Institute underlines its limitations. Deutsche Welle has more on the universities as a hotbed of protests. If you need a refresher on what sparked the protests, read our previous Big Story.