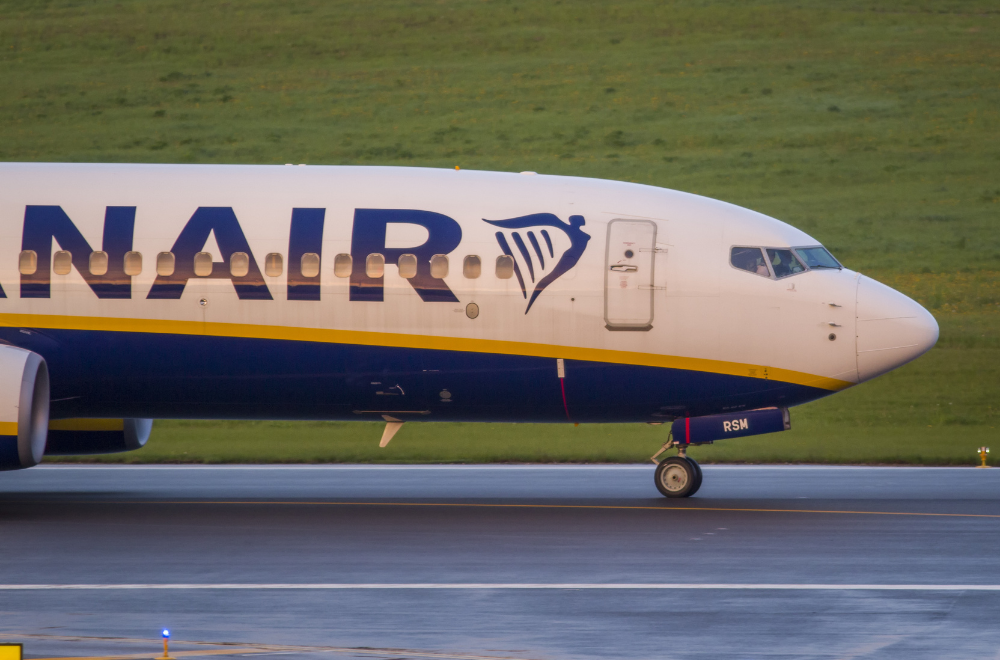 The outrageous hijacking of Ryanair

The TLDR: A flight from Athens to Lithuania was hijacked and forced to land in Minsk. The hijackers were not some terrorist organisation but the government of Belarus—which intercepted a commercial flight in order to arrest a dissident journalist. Most of the world is expectedly furious at this brazen disregard for international law… except, of course, Russia.

Tell me about the hijacking 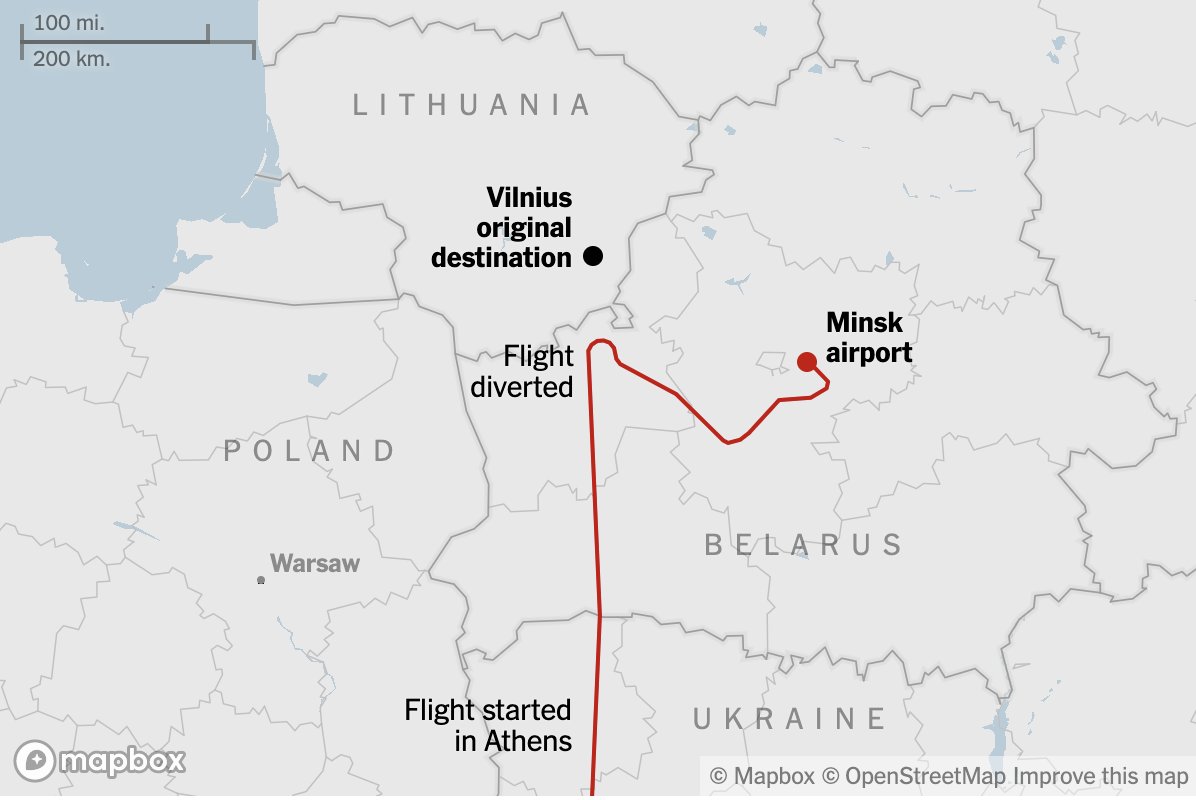 A premeditated move: Before boarding the flight, Protasevich texted friends:

“Lol, it seems that the [security services] were following me at the airport… And even tried to photograph my documents. It’s not certain. But in any case that’s some suspicious shit.”

What Belarus claims: Authorities said they had received a bomb threat from Hamas that read:

“We, the soldiers of Hamas, demand that Israel ceasefire in the Gaza Strip. We demand that the European Union withdraw its support for Israel in this war...There is a bomb on that plane. If you do not comply with our demands, the bomb will explode over Vilnius on May 23.”

Hamas strongly denied the claim, saying it does not “resort to such methods.” Belarus also insists that the pilot chose to divert to Minsk even though Vilnius was the nearest airport.

But who is this journalist?

The 26-year-old has been protesting against the government ever since he was a teenager—and was kicked out of university for his activities. He fled the country in 2019—and now lives in exile with his Russian partner in Lithuania. Protasevich was the founder and now former editor of a prominent dissident channel on Telegram called Nexta—which helped coordinate massive, months-long opposition protests that followed Lukashenko’s sixth (and rigged) presidential election in August last year:

“Anyone could anonymously contribute text messages, photos or videos to the channel–making it the most effective tool for hundreds of thousands of protesters rallying throughout Belarus and facing riot police who beat up, detained and tortured them. Armed with the Nexta feed, they could learn on the go whether police were approaching them. They could flee and regroup, find out where their detained friends were being taken and what was happening to them.”

Outlawed ‘terrorist’: In October, a Minsk court labeled Nexta as “extremist” and listed its staffers as “terrorists”—which, of course, includes Protasevich.

Point to note: As the flight readied to land in Minsk, Protasevich clearly knew what awaited him, telling the crew, “Don’t do this, they will kill me, I am a refugee.” His family has expressed concern that he will be tortured. FYI: Terrorist offences may carry the death penalty in Belarus, where capital punishment remains legal. The other charges against him carry a 12-year prison sentence. And recently, one of the other dissidents died under suspicious circumstances in jail.

Also this: After his arrest, an exhausted Protasevich appeared on the state television channel and said:

“My treatment from officers has been maximally correct and according to the law. Also, I am continuing to cooperate with the investigation and to give a guilt confession to the charge of organizing mass disorder in the city of Minsk.”

So Belarus is a dictatorship?

Why now? Some observers view it as “crazy, blind revenge” against a man who has used the internet to foil Lukashenko. Others say:

“This is a political message—to the Belarusian political migrants of the new wave, and on the other hand—to his supporters, the so-called ‘electoral swamp’...The message is that the government is strong and may get to anyone.”

Also this: “Lukashenko is intent on further demonstrating to the West, and to the people of Belarus, that he has long reach. The plane hijacking serves this aim.”

But what about international law?

There are three possible violations.

One: The Chicago Convention on International Civic Aviation says that if an airline is intercepted, it must not endanger the lives of passengers or the safety of aircraft. It can be argued that forcing Ryanair to land at an airport that was further away did exactly that.

Two: The Montreal Convention states that “a person commits an offence if he unlawfully and intentionally … communicates information which he knows to be false, thereby endangering the safety of an aircraft in flight.” And communicating a false bomb threat will likely fit that criteria.

Three: According to aviation attorneys, international law also prohibits the use of armed force against commercial aircraft, and has standards governing the interception of commercial aircraft by the military. This is specifically laid out in the Chicago Convention:

“It specifically prohibits the use of military force against passenger flights, stating: ‘The contracting States recognize that every State must refrain from resorting to the use of weapons against civil aircraft in flight.’ There are situations in which a state can use force against a civil aircraft, such as self-defense, or if a plane violates its airspace without permission, but neither applies in this case.”

So sending that MiG to intercept the plane may be flagrantly illegal.

The immediate fallout: The European Union has moved quickly to stop all EU-based airlines from flying over Belarus and ban Belarusian airlines from flying over its airspace or landing in its airports—“effectively severing the country’s air connections to Western Europe.” At a speedily organised meeting, EU leaders also called for the “immediate release” of Protasevich and Sapega. Coming up next: economic sanctions that will take longer to enforce. FYI: The US announced that it will work with the EU to “hold the Lukashenka regime to account.” This tracker shows flights already flying around Belarus:

Still on Belarus’ side: Russia. Belarus has long been one of Moscow’s ‘satellite’ allies—hopelessly dependent on its economic aid. And Lukashenko has been its man in Minsk, propped up solely by Russian support. Responding to the hijacking, President Putin’s spokesman said: “In this case, there are many controversial statements, and we wouldn’t want to take part in this race, to compete in condemning or supporting anyone.” And some analysts argue that Lukashenko would never have taken such a brazen step without Russian approval or assistance.

The bottomline: We are witnessing the rise of ‘transnational crimes’—where a country commits flagrantly illegal acts that violate the international law, and those of other countries, be it the assassination of Jamal Khashoggi in Turkey or the attempted murder of former Russian spy Sergei Skripal in London. As The Atlantic notes:

“All of these cases form part of what is becoming a new norm: Authoritarian states in pursuit of their enemies no longer feel the need to respect passports, borders, diplomatic customs, or—now—the rules of air-traffic control. In this new world, dictators are ever more prepared to arrest or murder political dissidents anywhere, no matter what citizenship they might have or which foreign laws or bureaucratic procedures might theoretically protect them… The price they have to pay as a result, in sanctions or in bad relations with the outside world, clearly no longer bothers them.”