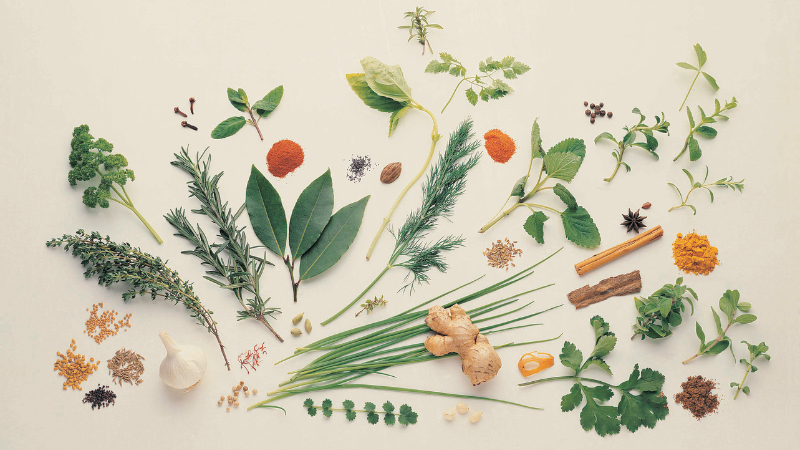 We picked recipes that were both unique and sounded delicious—and inspired us to head to the kitchen. They include: Goan-style brinjal pickle, a Bengali fried potato and prawn snack, a traditional Maharashtrian mutton dish and Anand’s signature Mishti Doi Cheesecake. 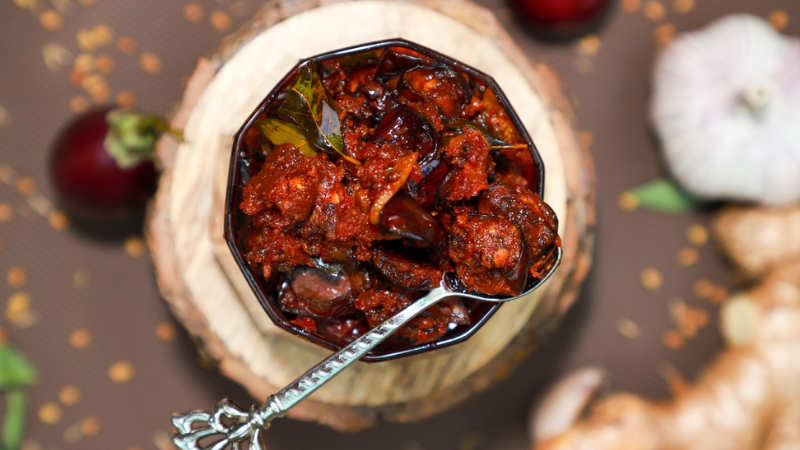 My great aunt’s brinjal (aubergine) pickle is as traditional as it gets and represents a snapshot of Goan flavours. She loved me and so patiently showed me how to make it step by step. When we had the Deli at Contemporary Arts & Crafts on Nepean Sea Road in Bombay in the 1990s, I made and bottled it in lovely little jars with handmade paper covers as part of our range of preserves, pickles, sauces and chutneys. It sold like hot cakes. We don’t make it commercially any more so here it is for you to try.

Combine the spices with the malt vinegar and grind to a paste. Sprinkle salt on the brinjal and leave for an hour. Squeeze the excess water out by pressing the cubes with your hands or a kitchen towel. Mix the brinjal cubes, the spice paste, sugar and oil thoroughly in a bowl and transfer to a heavy-bottomed vessel. Heat till the oil simmers. Add the ginger and garlic juliennes and curry leaves, then simmer (uncovered) till the brinjal cubes are just cooked but not mushy this should take about 10 minutes. Remove the cooked pickle from the heat. You can fill the pickle into clean jars either while it is still hot or wait for it to cool down to room temperature. Hot filling is preferable! 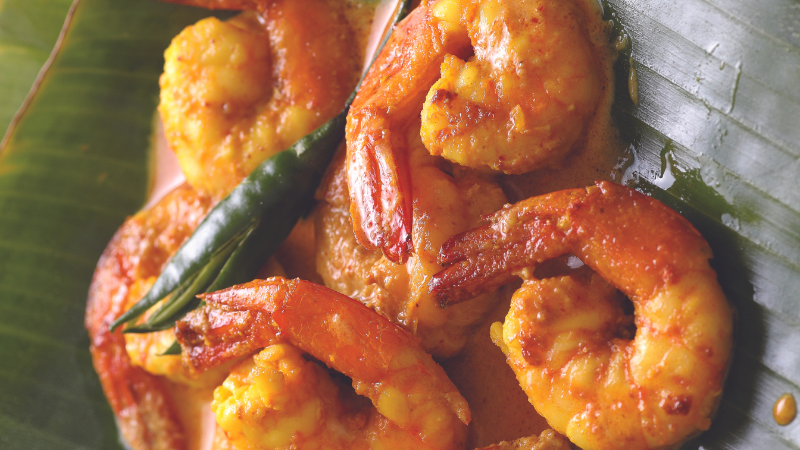 Teatime snacks in India tend to be savoury, and often spicy and fried. The word ‘chop’ in India could mean a piece of meat with a bone. It could also mean a ball of mashed potato which has been filled with lamb or beef mince or chopped prawns. The latter is associated with the Christian communities of India and is a snack or first course in Goan and Mangalorean homes. Chops are round or flattened slightly, dipped in egg, coated with fine breadcrumbs, and fried. In Kolkata, they take on a fishy twist and are dipped in a chickpea flour batter before being deep-fried. People either make them at home or pay a visit to their neighbourhood telebhaja shop which sells all manner of fried snacks for teatime. This recipe was shared by Madhushree Basu Roy.

Mix prawns, turmeric powder and a pinch of salt in a bowl and marinate for 10 minutes. Grate the potatoes (or use a ricer which has revolutionized mashing potatoes and which I now use for all my mashed potato needs) and keep aside. In a frying pan, take 2 tbsp of oil and lightly fry the marinated prawns on a low heat and remove when cooked. In the same frying pan, lightly fry the chopped onions and add the grated boiled potatoes. Mix them well and cook for 2–3 minutes on a high heat.

In a large bowl, mix the potato-onion mix, bhajamoshla, prawns and salt. In the frying pan, once again, take 1 tsp of oil and, when it becomes hot, add the dried red chillies. Fry them till they turn crispy and then remove from the heat. Crush the roasted red chillies in a mortar and pestle or with your fingers (it is advisable to wear gloves if you try the latter) and then sprinkle onto the potato mix along with some grated ginger. Mix everything well and make small balls—the size of a lime.

Make a batter with the chickpea flour, garlic paste, baking soda, salt and water. Whisk well so that the batter becomes smooth and thick. Heat enough oil in a kadhai or deep-frying pan to deep fry the balls. When the oil is hot, dip the potato balls into the chickpea flour batter and deep fry immediately in the hot oil till they turn golden brown. Control the temperature so as to not burn the outer shell. Drain excess oil on some kitchen paper. These chops are traditionally served with green chillies but I love them with the tomato and date chutney later in this chapter. 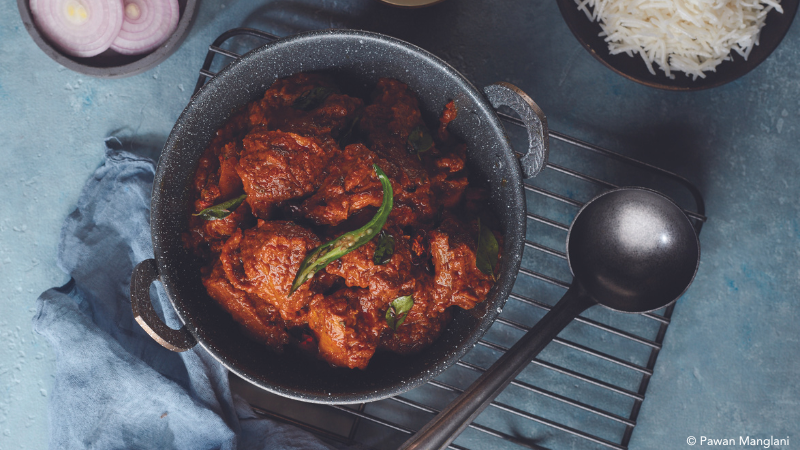 Kolhapuri is often a synonym for spicy or chilli hot in traditional Maharashtrian cuisine. While it is true that they enjoy their chilli in Kolhapur, not all dishes are fiery. This one, however, usually is. I asked Hemlata Angre for her recipe because I simply couldn’t get enough of her version of this dish. She has slightly tweaked the recipe after leaving her hometown, near Kolhapur, for the fields of Ujjain near Indore in Madhya Pradesh. I have played around with it further, lessening the fire and brimstone, simplifying the cooking process and going easy on the amount of oil used. It is still a delicious but complex dish, heavy with masala.

2 whole pods of garlic, peeled and

made into a paste

Heat ¼ cup oil in a large casserole or pressure cooker. Add asafoetida and one sliced onion. Fry for a minute till it turns golden and then add 1 chopped tomato, 1 tsp turmeric powder, the mutton, 1 tsp salt and 3 cups of water. Pressure cook for 10–15 minutes. Traditionally, this would have been slow cooked in a heavy-bottomed degchi for at least an hour.

Heat ¾ cup of oil in a large frying pan or kadhai and add the remaining onions, ginger and garlic pastes. Sauté on a medium heat till golden. Add the leftover tomatoes and roasted coconut. Cook on a low heat till it all turns brown. This may take about 15 minutes. Grind this into a paste and keep aside.

In a large casserole or handi, heat the remaining ¼ cup oil. Add bay leaves, onion-coconut paste (that you prepared in stage 2), 4 tbsp Kolhapuri masala and sauté for 4–6 minutes until the oil leaves the mixture. Add the mutton and stock. Cover and cook on low heat till the gravy becomes quite dry. Enjoy hot with millet roti (bhaakri).

Note: The original recipe for Kolhapuri masala has around six more ingredients which can only be found in Maharashtra and South India. This is my abridged version. The masala can be quite spicy especially if you use hot red chillies in the spice mix. My recommendation is 4 tbsp for this recipe. You can add or subtract, depending on your spice tolerance. 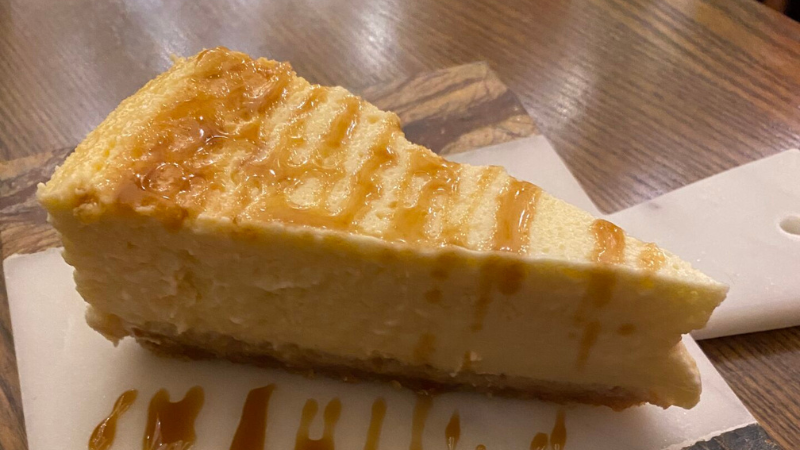 I created this dish for an Indian festival in Hong Kong (India by the Bay) which successfully ended a dinner titled ‘Flavours of India’. While Indian food is such a hit internationally, people often find Indian sweets and desserts far too sweet and a bit vernacular. It is a safer bet to go for familiar desserts like cheesecake, chocolate mousse or bread & butter pudding and give them an Indian twist with the addition of Indian fruit or spices. This is my old New York cheesecake recipe. I substitute Bengali ingredients for the American ones. We also serve this at Colonel Saab in London.

freshly squeezed (or the juice of kaffir lime)

Preheat the oven to 180°C. Grease an 8 x 2 ½-inch or higher spring form tin. Crumble the biscuits using a rolling pin or food processor. Pour in the melted butter and mix well. Press this butter-biscuit mix firmly into the base of the tin. Refrigerate for at least 1 hour till the base is firm. Remove and wrap the outside of the tin with a double layer of heavy-duty foil to prevent seepage. If you are using mishti doi, hang around a kilo in a muslin cloth for 4–6 hours to drain off the excess water so you are left with 750 g hung

In a large mixing bowl, beat the doi or cream cheese and palm jaggery until very smooth, preferably with an electric whisk. Now beat in the cornflour. Add the eggs, one at a time, beating the batter after the addition of each egg. Keep beating the mix until smooth and scrape down the sides. Add the lemon juice, vanilla and salt and beat until incorporated. Add in the thick cream and beat just until blended. Add the lime/lemon rind by hand.

Pour the mix into the prepared tin with the biscuit base. Set this tin with your cheesecake mix in a larger tin and pour in 1-inch of very hot water into the larger tin. This gives the cheesecake a lighter texture. Bake in an oven for 45 minutes, covered loosely with foil. Turn off the oven without opening the door and let the cake cool for an hour in the oven. Remove and cover with a plastic wrap (cling film) and refrigerate.

Tip: If you can’t get your hands on mishti doi, substitute with half hung yoghurt and half cream cheese and increase the quantity of jaggery to one cup.