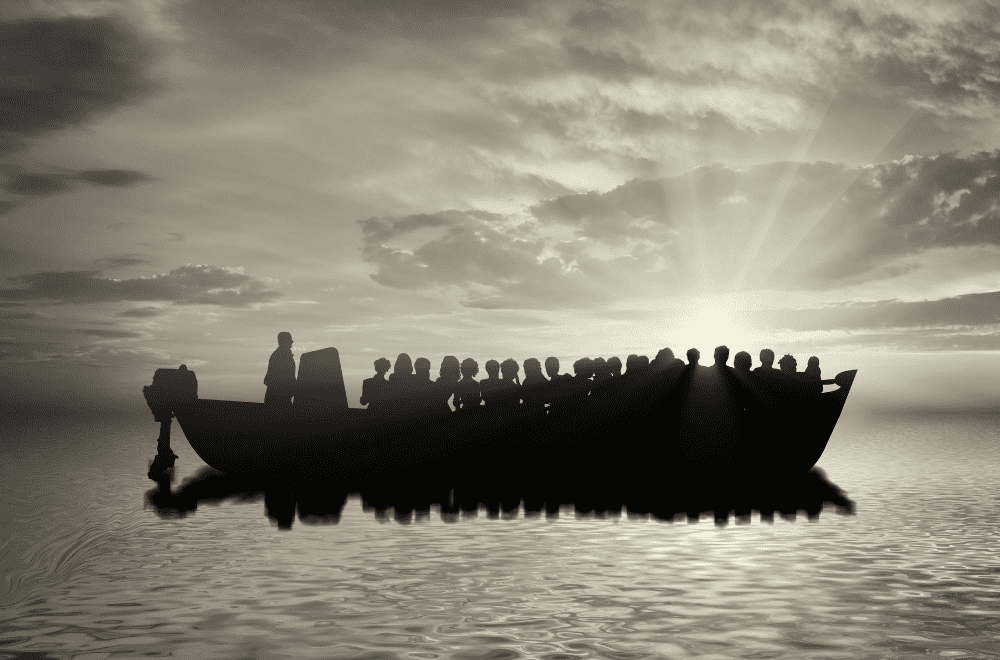 Greek authorities are prosecuting 24 humanitarian workers—who are charged with serious crimes such as money laundering and trafficking. Their real crime: saving refugees drowning at sea. The case has sparked global outrage—and drawn attention to the dire situation in the Mediterranean, which has become the most dangerous border in the world.

Here’s how it all started—on a cold night in February 2018, on the Greek island of Lesbos:

The rescue mission: Two humanitarian volunteers for Emergency Response Center International (ERCI)—Sara Mardini and Seán Binder—were scanning the coastline for migrant boats in trouble. These flimsy boats and dinghies carry desperate refugees from the Middle East into Europe—and Greece is the most popular entry point. Its occupants often drown at sea because European governments are reluctant to give them permission to land on their shores. NGOs like ERCI work with local authorities to conduct search-and-rescue missions for these refugees. Here’s an example of the dinghies that land in Lesbos: The arrests: On that night, Binder and Mardini were accosted by the police—who showed them a military plate concealed under the rear licence plate of their jeep. They were briefly detained and denied any knowledge of the hidden plate:

They didn’t know anything about the plates, nor was it apparent how a hidden plate was supposed to help the jeep pass as a military vehicle — it was painted silver and decorated with huge E.R.C.I. logos.

The two were allowed to leave that night—but were suddenly arrested six months later. This time the police meant business and the charges were serious.

The charges: Binder and Mardini were taken to the courtroom, where the charges were laid out in front of a judge:

According to the narrative presented by prosecutors and the police, Binder and Mardini were not humanitarians at all, but members of a sprawling criminal cabal responsible for trafficking droves of migrants into Greece… The charges included espionage, forgery and the illegal use of radio frequencies; they would grow to include trafficking, fraud, money laundering and being part of a criminal organization.

They were charged on separate misdemeanour and felony charges—which carry jail terms of up to eight years and 25 years, respectively.

Point to note: Human rights organisations call these charges “farcical” for good reason. For example, they are accused of illicit exchanges of “confidential information” by using “encrypted social networking and communication” tools. The tool in question: WhatsApp.

The accused: Sarah Mardini is the most famous among the accused. She and her sister Yusra are Syrian refugees and also competitive swimmers.  While escaping Syria, their dinghy with 20 other refugees started to sink. The two sisters jumped into the water and started dragging the dinghy—pulling it for 3.5 hours to safely reach the shore. Their story was eventually turned into a Netflix biopic ‘The Swimmers’:

The others charged: include two dozen volunteers of different nationalities who worked with ERCI—including Binder, ERCI founder Panos Moraitis and two other staff members. The indictments sent to them have allotted each person a number—from 1 to 24—but doesn’t identify a number with a name. As a result, no one knows the exact charges against them.

Is this the first case of its kind?

No, shocking as this one may be, these kinds of trials have become more common in recent years. There are currently 58 investigations against “private entities” involved in search-and-rescue missions across Europe. The most infamous among them is the case of a Somalian refugee Mohammad Hanad Abdi—who was sentenced to 142 years in a Greek jail for steering a dinghy he was on to safety:

The smuggler forced him to take over, hitting him in the face and threatening him with a gun before abandoning the dinghy in rough seas. And people’s lives were at stake. Even with hindsight, he said, “I would do it again, as long as I am saving lives.”

He has happily been released early after winning an appeal.

Also this: It’s not just Greece that’s getting tough. The crew of the Iuventa rescue ship—which has saved 14,000 lives in the Mediterranean Sea—is accused of colluding with human traffickers in Italy.

Why are these countries being so cruel??

A flood of refugees: Because the EU has been swamped by refugees since 2015—when Syrians fled their country in the midst of a bloody civil war. In just that one year, over a million refugees (1,005,504, to be exact) entered Europe—and most of them (816,752) arrived by sea in Greece. That tsunami has since become a regular and permanent stream. In 2021, around 125,000 migrants and asylum seekers entered Europe via the Mediterranean. Countries like Italy and Greece have borne most of the burden.

The backlash: As the New York Times notes:

The EU… has quietly adopted a much harsher line on migration and asylum. The bloc has erected new barriers, both physical and legal, to keep out would-be newcomers, including a substantial expansion and empowerment of Frontex, the EU’s border-protection agency.

While Chancellor Angela Merkel initially had an ‘open door’ policy for Syrians fleeing the Islamic State, Germany soon back-pedalled on its liberal immigration policies since 2015. Hungary, Slovenia and Macedonia constructed physical barriers such as border fences to keep them out. And the EU has cut deals with Turkey to keep the refugees within its borders. And recent media exposés revealed a silent partnership between Frontex and Libya:

Officials in multiple E.U. countries routinely transmit Frontex’s aerial surveillance footage to the Libyan Coast Guard, which uses that information to pick up migrants and return them to a network of abusive detention centers in Libya. Efficient and brutal, the at-sea capture and on-land internment of these migrants is what European Union officials hail as part of a successful partnership with Libya in their “humanitarian rescue” efforts across the Mediterranean.

A shocking data point to note: The overall numbers of refugees arriving in Europe is far lower than the 2015 peak. But the death rate for migrants trying to reach Europe has been increasing since 2019: “Today, the Mediterranean is by far the world’s deadliest border.”

The vicious cycle of cruelty: The flood of immigration has heightened the popularity of rightwing parties and governments. By October 2017, 24 European countries had right-wing nationalist members of parliaments. Both Greece and Italy have rightwing governments today. But the tougher approach has only created a spiral of ever greater cruelty—that does little to stem the flow of refugees:

Border defences often produce or exacerbate the very problems they purport to solve, by forcing irregular migrants to take more dangerous routes, often with increasing reliance on people smugglers, which in turn encourages states to crack down even harder.

Criminalising rescue volunteers: The trial in Greece has to be understood within this broader context. Ever harsher attitude toward refugees have been accompanied by rising rage at those who help them:

The expanding role of NGOs fed a perception that they were acting as a “pull factor”: that by rescuing migrants at sea, NGOs only encouraged more and riskier journeys, thereby actually increasing deaths. More fringe observers accused NGOs of secretly conspiring with smugglers to bring migrants into Europe. The most extreme version of the “pull factor” narrative [pushes]... the conspiracy theory that European leaders were undertaking a “great replacement” of the continent’s population.

The bottomline: The ‘refugee problem’ cannot be ‘solved’ by simply becoming more cruel. The world is a vastly unequal place—where sorrow and hardship are concentrated in some parts of the world, while others thrive in peace and prosperity. As this gap has widened, it has altered the movement of people across the globe:

Although the proportion of migrants has not grown significantly, the origin and direction of migration has changed… people are leaving a much wider range of countries than ever before, and they are heading to a much narrower range of destinations than ever before. They are going to the places where power and wealth have become concentrated.

As long as the price of dying at sea is lower than the costs of staying in your home country, we can’t fix the refugee problem. Not without ‘fixing’ the world we live in.

The New York Times (splainer gift link) has an excellent deep dive into the trial in Greece. Human Rights Watch details the charges against the accused—and explains why they’re absurd. This older Guardian piece is brilliant in dissecting the myths about the refugee crisis in Europe. ORF Online links it to the rise of the right.