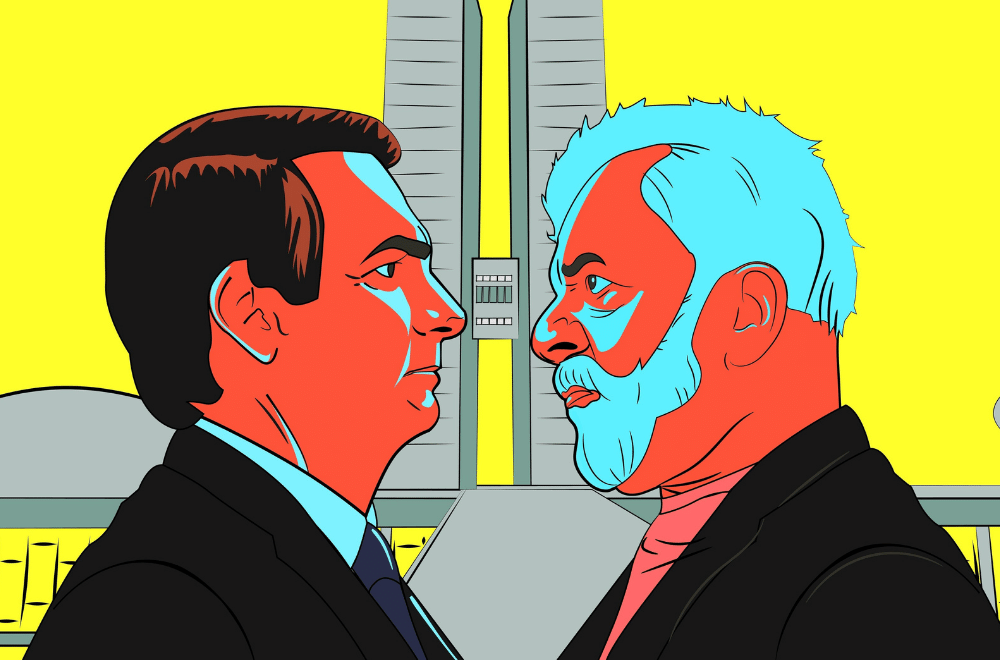 The battle to oust Jair Bolsonaro: Yes, it matters

The Brazilian president is poised to either lose the elections—or orchestrate a coup in the fourth largest democracy in the world. The future of the Amazon rainforests hangs in balance—and in a critical sense, the future of the planet.


First, why the Amazon matters

More than 40% of Brazil is covered by rainforest. The jungle absorbs CO2 from the atmosphere, and helps offset emissions from fossil-fuel burning. In trees and carbon-rich soils, the Amazon stores more carbon than any other ecosystem in the world—”the equivalent of four or five years worth of human-made carbon emissions, up to 200 gigatons of carbon.”

Clearing those jungles has serious consequences for the entire planet:

“If people continue to cut and burn that tree cover at the rate they do today, transforming the ecosystem into cattle ranches and soybean farms, Brazil will dramatically worsen global warming, with disastrous consequences.”

Human activity in the Amazon also adds to global emissions in a variety of ways:

Most importantly this: The latest research indicates that the rainforests have reached a critical tipping point. The wettest region in the world has experienced three droughts since 2000. The forests are losing both moisture and resilience—the ability to bounce back from deforestation. And it “is on the edge of this cliff, this switch to a different ecosystem”—transforming into a savanna, with grasses and far fewer trees. So the deforestation will have to be reversed asap to avoid catastrophe.

Data point to note: If the Amazon shrinks or disappears, we may also lose any hope of controlling global warming: “Losing the rainforest could result in up to 90 billion tons of heat-trapping carbon dioxide getting put back into the atmosphere… equivalent to several years of global emissions. That would make limiting global warming more difficult.”

An Amazonian battle: Bozo vs Lula

Meet Jair Bolsonaro: He is one of the most notorious strongmen in the world. Bolsonaro is best known for his abuse of human rights, disastrous Covid-denying policies and—above all—the wanton destruction of the Amazon rainforests. During almost four years of his rule, he has done the following:

Bolsonaro’s view: of the Amazon rainforest is straight-forward: “He tells the rich world: You built prosperity by cutting down your forests, now it’s Brazil’s turn.”

Meet Luiz Inácio Lula da Silva: The leftist former president is the polar opposite of Bolsonaro. Lula has vowed to strengthen environmental protections—making it a key part of his campaign plank, saying: “Although the Amazon is Brazil’s sovereign territory, the wealth it produces has to be used by all inhabitants of planet Earth.” He has also vowed to create a ministry for indigenous peoples, clamp down on illegal miners and rebuild Brazil's main environmental protection agency.

But he is going green by leveraging the interest of Western countries in the protection of the Amazon:

“Lula is also keenly aware of foreign capital’s focus on all things related to environmental, social, and corporate governance objectives… ‘Lula is incorporating environmental issues into his platform in a way he never did in previous campaign cycles,’ says Christopher Garman, managing director for the Americas at Eurasia Group. ‘He’s grabbing on to it to signal to the private sector that there are opportunities here. If you get this question right, Brazil could benefit from a cycle of investments’.”

Also this: Lula plans to help poor farmers by targeting agri-businesses—the hardcore supporters of Bolsonaro. Lula wants to redistribute their land to create small family settlements. And that is already enraging wealthy ranchers:

“Big farms are what support Brazil. Why is it that people in countries where everyone walks on cement and lives among concrete, sitting on their luxury sofas—why is it that they say we have to preserve all this forest without compensation?”

The big ‘but’: The reality is that preserving the Amazon is not a high priority for most Brazilians. They are more concerned with more pressing issues—like poverty. With soaring food and fuel prices, around 33 million people are experiencing hunger—a three decade high. The share of families who lacked money for food at some point in the preceding year jumped to 36% in 2021—the highest level since 2006.

And Lula’s real selling point is that he will revive the economic boom he presided over between 2003 to 2010. As one of his supporters says: “Under Lula, our bellies were full.”

The election: Where we are now

Brazil's electoral system has a run-off system. If a candidate wins more than 50% of the votes in the first round, they are declared an outright winner. If not, the top two candidates face each other in a second and final contest. The first round was held on October 2.

Bolsonaro’s mini ‘win’: Lula was 14 points ahead in the polls—and was widely expected to win outright on Sunday. But he only secured 48%. So he has to face Bolsonaro again on October 30. More importantly, Bolsonaro did far better than expected—getting 43.2% of the vote—far more than the 36%-37% predicted by pollsters. Also notable: Bolsonaro received almost two million more votes than he did in the first round of the 2018 elections that handed him the presidency. The gap between the two men is now a mere 6 million votes.

Here’s why many are worried about the next 26 days:

Fear of violence: This has been one of the bloodiest election seasons in the nation’s history. This is how bad it is right now:

“About 40 mainly local politicians from the left and the right were killed in the first half of this year, while some 170 others were victims of attempted murders, beatings, kidnappings and verbal attacks such as death threats related to their roles in office… The level of attacks is some 50% more than during the previous six months, and more than a fourfold increase compared with the first half of 2019.”

And it has been getting much worse in recent months: there have been 140 attacks on politicians from July through September 23—a 40% increase from the previous quarter. Some experts are therefore predicting “four weeks of gore” in the run up to the October 30 vote.

A Bolsonaro coup: For months, Bolsonaro has been attacking Brazil’s electronic voting system—and implying that the election could be rigged. What’s even more worrying is that the military has been making similar noises about election integrity—raising fears of a military-backed coup. Not helping matters: Bolsonaro has already warned that he will only leave office if he is “killed, jailed, or victorious.” And he has readied his supporters for a fight, declaring “if necessary, we will go to war.”

So here’s the nightmare scenario for October 30:

“If Brazil’s electoral tribunal announces that Lula has won, armed Bolsonaristas might attack the tribunal. The question then is which side military police forces, nearly 400,000-strong in all, who are supposed to keep order, would take. They are trigger-happy and fond of Mr Bolsonaro, who has proposed a shield law for officers who kill suspects. Some might prove more loyal to him than to the Brazilian constitution. If there is chaos in the streets, Mr Bolsonaro might invoke emergency powers to postpone the handover of power.”

Data point to note: As the Economist points out: “Mr Bolsonaro’s followers are better armed than ever before: since he took office and widened loopholes in gun controls, the number of guns in private hands has doubled to 2 million.” A Capitol Hills style siege may be far more effective—especially if law enforcement and the military stay on the sidelines.

The bottomline: For all the hand-wringing in the Western media, there is no reason to believe that democracy will not prevail in Brazil. Its people are more than capable of safeguarding their freedoms—and both Bolsonaro and the generals who support him know that. As one retired general says, “We might think it’s bad that the president questions the ballots. But it’s much worse if every five minutes we think the democracy is at risk.”

BBC News has the latest election results—while Washington Post and The Guardian have more on why the next four weeks will be rocky. TIME reports on the bloody election season. New York Times has more on the prospects of a military coup. Also in the New York Times: a solid profile of Lula. The Economist has a scathing piece on why Bolsonaro poses a risk to democracy—comparing him to Donald Trump. Bloomberg News is best on how the election will impact the future of the Amazon rainforests.