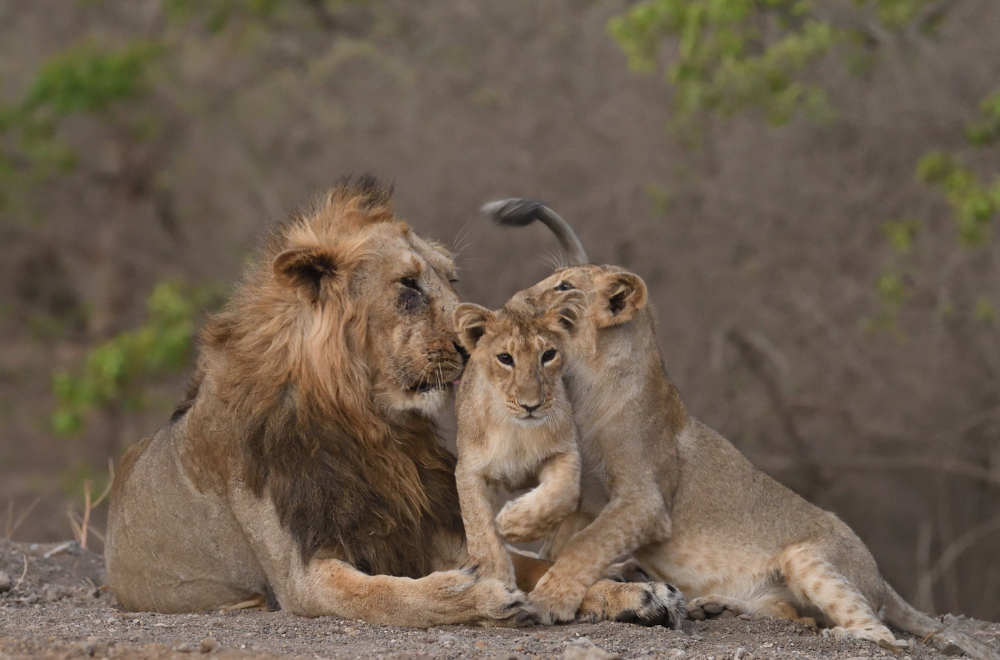 The Lions of Gir: To move or not to move?

The lions are the only remaining Asiatic lion population in the world. Environmentalists have secured a direct order to move a number of them to Madhya Pradesh—to ensure we don’t put all our eggs in one basket. But they remain in Gir despite a direct Supreme Court order. Why? We look at the history of the Indian lion—and the arguments for and against their relocation.

First, the bloody history of the Indian lion

Meet the Asiatic lion: Also called Panthera leo persica, they are 10-20% smaller than their African cousins. They are considered an endangered species—and found only in the Gir sanctuary in Gujarat. The good news is that their numbers have been increasing over the past several decades. In 2010, there were only 411 lions in Gir. That jumped to 523 2015—and rose to 674 in 2020. The territory they occupy has also expanded by 36%—from 22,000 sq km to 30,000 sq km.

A vast territory: At one time, the Asiatic lion roamed the vast swathe of the planet—stretching from the coastal forests of northern Africa, northern Greece across south-west Asia to eastern parts of India. You can see their territory below in light blue. 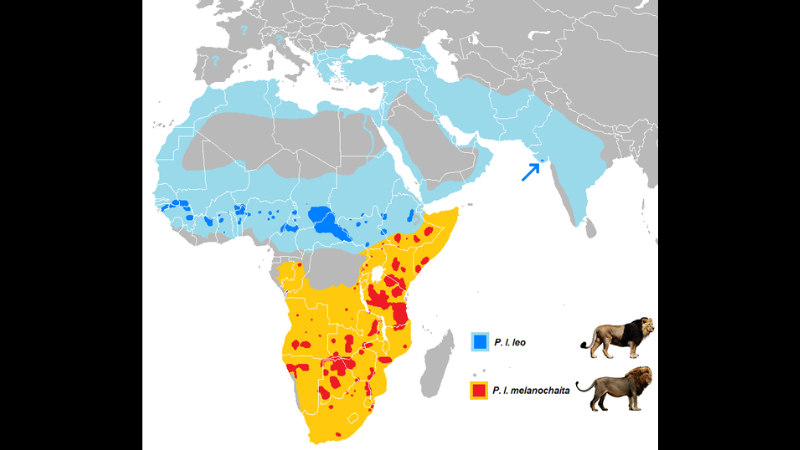 But they have since vanished from other parts of the world—eradicated from Turkey by the late 19th century. The last lion in the region was spotted in Iran in 1941.

A bloodbath in India: Lions were hunted and killed in vast numbers during the colonial era. Their population in places like Sindh, Jharkhand, Madhya Pradesh was wiped out by hunters—both burra sahibs and maharajas—by the late 19th century. The killings started soon after the British first confirmed the presence of lions in India in 1810. Between 1809 and 1823, they had sighted 129 lions in what is present-day Haryana—and killed 109 of them. According to recent research, “during such shoots, entire prides were wiped out by hunters, including cubs that were killed or captured.”

Something to see: Below is Sir Charles D’Oyly’s depiction of lions attacking hunters during this era. 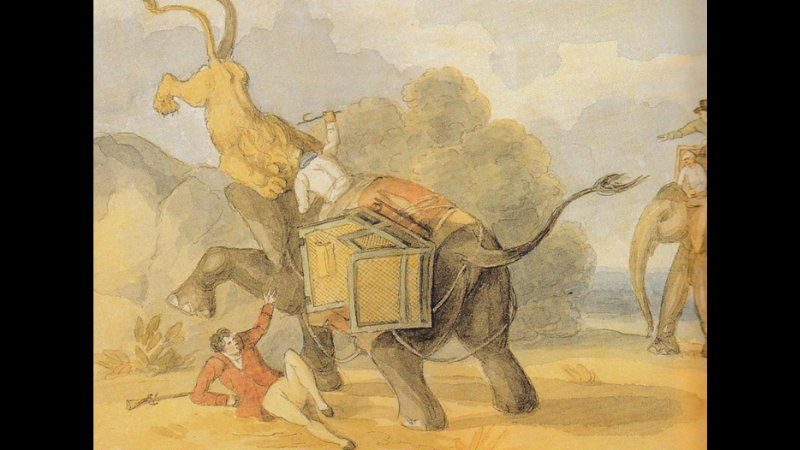 Saved by the nawabs: The only reason we have lions in Gujarat today is because of the Nawabs of Junagadh—and/or the Brits. Accounts of exactly how and when this happened differ. According to one version, Nawab Muhammad Rasul Khanji Babi invited the British for shikar in 1890—only to find he had a mere 12 lions left in his forest. In 1902, when the Nawab invited Lord Curzon for a hunt, he instead urged the ruler to help save the lions. Other versions (here and here) credit the nawabs for making the big move. In 1911, a reserve called Sinh Sadan or “abode of the lion” was established in Gujarat—which became the Gir sanctuary, in 1965.

For absolutely no reason: Here’s a lovely pic of a marching band of cubs:) 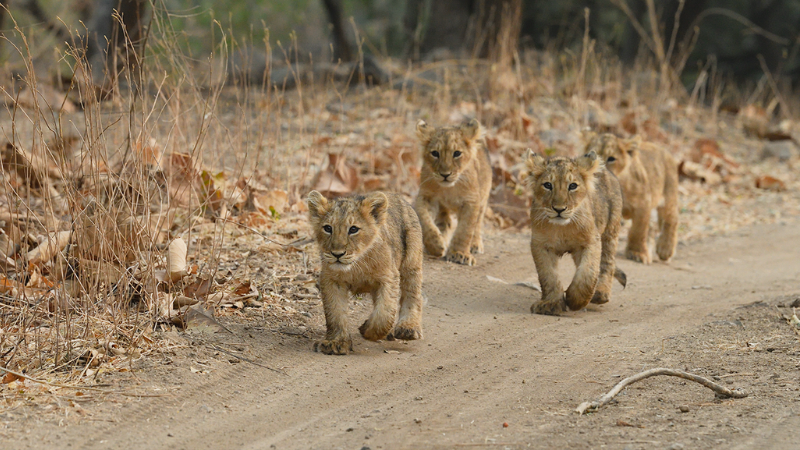 The relocation argument: is straight-forward. Putting all your lions in a single location makes them far more vulnerable to extinction. As one wildlife biologist puts it: “If the basket falls, all the eggs are bound to break.” The lions are exposed to any number of threats in Gir:

“Poaching and conflicts between lions and humans are the most visible challenges. But in addition, there’s a risk that this single lion population could be wiped out through the outbreak of disease or unforeseen natural catastrophes.”

Those fears are not unfounded. Lions move in packs and are far more likely to fall prey to infections. In 2018, more than two dozen lions died mostly due to CDV. In 2020, over 24 lions died of babeosis, a tick-borne parasite.

Also, overpopulation: As their numbers rise, lions need more territory. Gir has become overcrowded which has led to conflict—forcing the big cats to spread far and wide. Nearly a quarter now live outside the core sanctuary—increasing the risks that they will be killed due to development projects and human-animal confrontations. A third of the 159 lions who died in 2020 were killed by such conflicts.

Point to note: Over 100 lions have now wandered on to Gujarat’s beaches—which are not part of their natural habitat.

Gujarat’s point of view: The state has put forward a number of arguments against moving the lions. For example, Madhya Pradesh has been terrible at protecting its tigers—why should it be entrusted with lions? The density and numbers of prey is not adequate to support an apex predator.

But weightier arguments focus on potential lion-tiger conflicts. For example, Gujarat wildlife officials cite Kuno as a vital corridor for the “healthy dispersal and migration of tigers” between Ranthambore in Rajasthan and the Madhav national park in Madhya Pradesh. One of them writes:

“Those who dismiss this concern, point out that lions kill other lions all the time, same with tigers, how then is a lion-tiger conflict going to be any different, they ask. What is overlooked is that in this inexhaustible cycle of nature, elimination is followed by procreation—ensuring propagation of dominant genes, while in the case of a tiger-lion conflict, no procreation would follow—a disruption of the natural cycle.”

Point to note: Other research shows that the Kuno corridor is not used very often by tigers—and there was only one male in the area in 2021.

The history: The debate over moving a part of the population to Madhya Pradesh dates back to the 1950s. The government at the time moved a small pride of three lions (one male and two females) to the Chandraprabha Wildlife Sanctuary in Uttar Pradesh. The pride grew to 11 members by 1965—but then were wiped out by poachers and poison laid out by local villagers.

The big push: to relocate came in the 1990s—sparked by the death of 1,000 lions in Tanzania, killed by an epidemic of canine distemper virus (CDV). Worried about a similar tragedy in India, the Wildlife Institute of India (WII) identified Kuno Wildlife Sanctuary in Madhya Pradesh as a potential reintroduction site. Between 1996 and 2001, the MP government moved out 23 villages to make room for the lions and created a 1,280 sq km territory for lions. But to this day, the lions remain in Gir.

The big pushback: After Kuno was readied for the lions, the union government asked Gujarat to get ready for the move—but the state instead dragged its feet. Finally, in 2013, the Supreme Court ruled on a petition filed by environmental activists—ordering the state to release the lions within six months. The order said:

“The cardinal issue is not whether the Asiatic lion is a ‘family member’ or the pride of a State but the preservation of an endangered species for which we have to apply the ‘species best interest standard’.”

But the ruling did nothing to break the stalemate. Gujarat instead resorted to the great Indian bureaucratic trick—conducting over 30 studies on the feasibility of relocation. And it refused to sign a Memorandum of Understanding with MP to seal the deal.

The new consensus: With the union government now perfectly aligned with Gujarat’s stance, all talk of relocation has come to an end. The latest 25-year road map for Project Lion makes no mention of it. The focus instead is on “assisted natural dispersal” to new sites within the state—and potentially to Rajasthan. Though the government wants to make clear: “Nobody will stop the lions if they want to enter Madhya Pradesh” if/when they reach Rajasthan.

PS: The government has now assigned Kuno as the relocation sanctuary for African cheetahs (see: our Big Story) which will be flown in this year—eliminating it as an option for the lions. Environmental activists are furious: “Now, African cheetahs are being airlifted while our lions are expected to walk all the way to MP via Rajasthan.”

The bottomline: No one can deny that Gujarat has done an excellent job of taking care of the lions. But 674 is not a very big number. All it takes is a single catastrophe to wipe out the pride of our nation.

Down To Earth has a must-read on the lions of Haryana. Deutsche Welle lays out the arguments in favour of relocation—while Firstpost offers a counterview. Mongabay charts the history of the relocation debate. Indian Express has more on the government’s 25 year plan. Also in Mongabay: a sharply critical take on Gujarat’s politicking.