The data protection and privacy bill was highly controversial—and unpopular with both the opposition and, more importantly, big tech companies. The latter were unhappy with proposed rules that required them to store a copy of personal user data inside the country. They also banned the export of vaguely defined “sensitive” data. The opposition questioned provisions that allowed the government unrestricted access to personal data—while claiming to protect privacy. But the U-turn is most likely a result of a startup rebellion:

“We have received hundreds of letters from start-ups raising concerns…we don’t want a Bill that has the potential to stifle innovation… Start-ups have indicated that a hard localisation mandate, as prescribed in the current draft, is not something they want and we are re-looking at the provision for start-ups.”

Indian Express has more details on that angle. The Telegraph has the latest. We explained the bill in our Big Story.

US House Speaker Nancy Pelosi insisted on making an unofficial trip to Taipei—despite warnings from the White House that it was a bad idea. A furious Beijing—which considers Taiwan to be part of China—now plans to blockade the island nation as punishment:

“Taiwan is now bracing for Beijing to begin live-fire military drills on Thursday, an escalation without recent historical precedent that could encircle the island and drop missiles into seas only 10 miles from its coast.”

They are a direct challenge to Taiwan’s coastline and territorial waters. And the exercise will effectively block all ships and flights. Taiwan was already forced to scramble jets on Wednesday to warn away 27 Chinese aircraft in its air defence zone. Also read: the AP via The Hindu on how the visit has put US-China ties on the precipice. (The Telegraph)

OTOH: Pelosi remains unfazed by the firestorm of criticism. Here’s what she said at a press conference in Taipei:

Spicejet is looking for investors

The beleaguered airline has been in trouble with aviation officials over repeated malfunctions and maintenance issues. It had also defaulted on fees it owed airport authorities for running flights, including navigation, landing, parking, and others. Spicejet’s real problem: it’s running out of money. Its promoter Ajay Singh is now looking to sell a stake in the company. Rumours are a Middle Eastern airline is interested in buying 24%. (Economic Times)

Life expectancy for women: A new study challenges the widely held belief that women live longer than men. It dismisses the use of life expectancy—the average length of life—as a “simplistic measure” that is misinterpreted as meaning that “men do not live as long as women.” A better indicator is the actual lifespans of men and women—which shows “that men have a high probability of outliving women—especially those who are married and have a degree.” (Independent UK)

Covid cognitive decline: Worrying research shows that long-term loss of smell may be an indicator of deeper cognitive decline—such as memory loss and loss of concentration. These may be early signs of diseases such as Alzheimer’s and other neurological conditions. New Scientist has more details.

Synthetic embryos: Israeli scientists have created mouse embryos without using a sperm or egg—and then grown them in an artificial womb for eight days. The aim isn’t to create mutant mice but to understand how organs grow. In this case, the embryos included rudimentary beating hearts, blood circulation, folded brain tissue and intestinal tracts—before they stopped growing. The bigger mission: to grow replacement organs for humans. (Washington Post)

‘Batgirl’ has been cancelled

The DC film was in post-production and set to air on HBO Max—but was unexpectedly scrapped. One reported reason: the movie’s budget shot past $100 million—but it performed very poorly among test audiences. According to one inside source: “They think an unspeakable Batgirl is going to be irredeemable.” ‘Batgirl’ was helmed by Ms Marvel directors Adil El Arbi and Bilall Fallah. It is now “the most expensive cancelled cinematic project ever.” FYI: a lot of this has to do with the Warner Bros/Discovery merger in 2021. The new leadership also axed CNN's streaming platform to cut costs. (The Guardian)

Swiggy okays the side hustle

The company introduced a ‘moonlighting policy’ that allows full-time employees to take up other projects after work hours or on weekends. The caveat: the gigs can’t affect their productivity or pose a conflict to Swiggy’s business. The reason: “[O]ur goal is to encourage employees to pursue their passion without any constraints due to their full-time employment with us.” FYI, last week, the company also announced a permanent work-from-anywhere policy for most roles. (Economic Times)

Speaking of desirable jobs:  The Canadian company Candy Funhouse is hiring a “chief candy officer” at an annual salary of $77,786—and an extensive dental plan. The job description: to act as its lead taste tester—trying more than 3,500 pieces of candy per month, or more than 100 a day on average. Just in case you think this is all fun and mithai, the job also entails very serious responsibilities:

“In the role, you’d be approving candy for sale and making decisions about whether to award a ‘CCO Stamp of Approval.’ This all happens in the company’s ‘Candy Intelligence Agency.’ You’d lead the company’s ‘candy strategy,’ and run ‘candy board meetings.’ Oh, and you’d be in charge of ‘all things fun.’”

FYI: it is open to anyone living in North America above the age of five:) (Washington Post)

One: The James Webb Telescope continues to delight astronomers. NASA released new images of  the Cartwheel Galaxy—which is located 500 million light-years away. It was formed when a large spiral galaxy and a small galaxy violently collided—which is why it looks like a “wagon wheel.” Also: it is very pretty. CNN has more details. Wondering why this telescope is a big deal? Our excellent Big Story has all the details. (CNN) 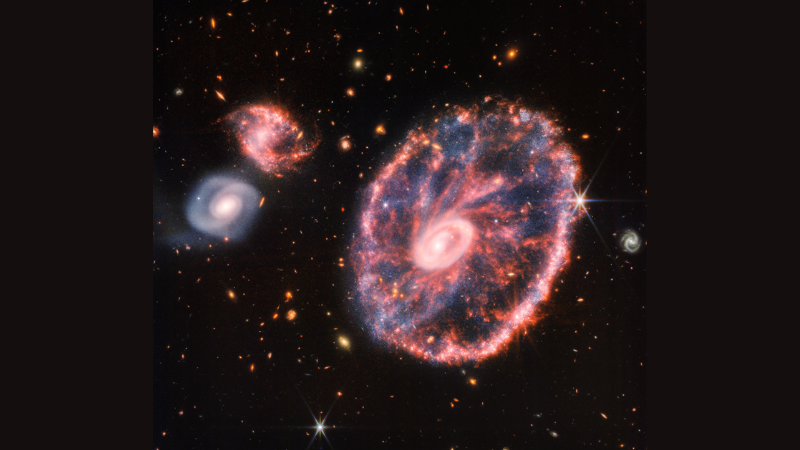 Two: Actor Dev Patel went viral for the most unlikely reasons yesterday. He broke up a knife fight in Adelaide—involving a couple. The woman stabbed the man in the chest. So Patel and his friends intervened—and stayed with the victim until the ambulance arrived. You can see him on the scene, speaking to the cops below. Meanwhile, Karan Johar made news for sharing “cryptic” posts on “love” and “sensitivity.” Just saying. (BBC News)