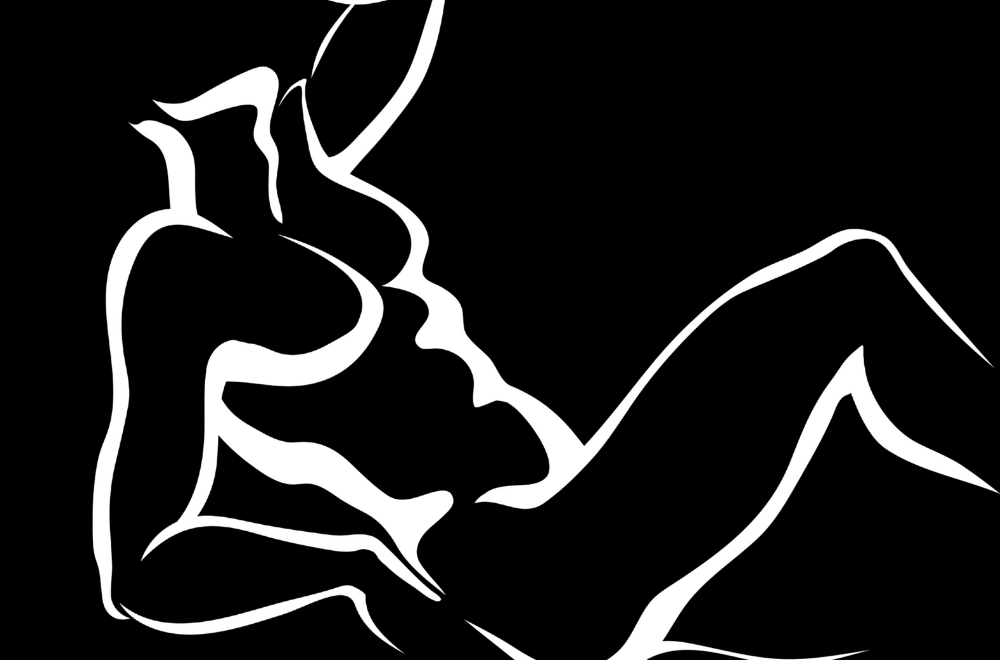 A big brouhaha over butt-naked Ranveer

Actor Ranveer Singh has been booked for a battery of ‘crimes’ for posing naked in a magazine photoshoot. We looked at the laws that cover nudity—the double standards in applying those laws—and India’s time-honoured tradition of baring it all.

First, the case of the naked actor

Last week, the internet was ablaze with photos of Ranveer Singh posing naked for Paper magazine. And to be fair, he looked pretty darn hot: 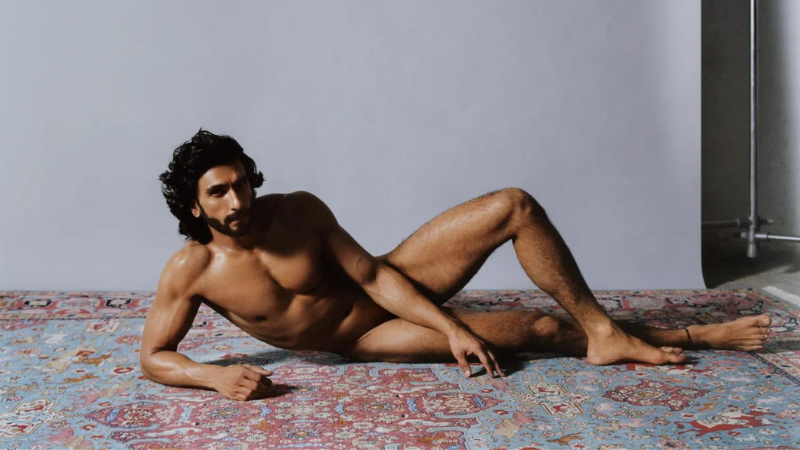 Many saw it as a homage to Burt Reynolds’ iconic shoot for Cosmopolitan back in 1972. 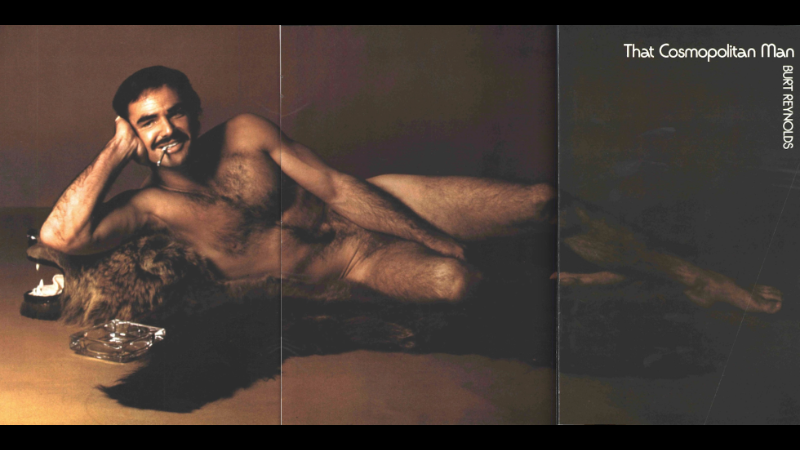 Quote to note: Speaking of the photos in his interview with Paper magazine, Singh said:

“It’s so easy for me to be physically naked, but in some of my performances I’ve been damn f*****g naked. You can see my f*****g soul. How naked is that? That’s being actually naked. I can be naked in front of a thousand people, I don’t give a sh*t. It’s just that they get uncomfortable.”

The cases: Since this is India, of course, some folks were inevitably offended. Lalit Tekchandani—who runs a Mumbai-based NGO—and a woman lawyer Vedika Chaubhey filed police complaints against Singh. Why Tekchandani is upset:

Why Chaubey is upset:

“Last week, I saw many nude photographs of actor Ranveer Singh on social media and the photographs were clicked in such a manner that any male or female will feel ashamed about it. This clearly shows that he has nothing to do with Indian culture and he is least bothered about the people living in the country and abroad but his only concern is to earn crores of rupees by damaging the cultures and traditions of India.”

The FIR: The Mumbai police have now booked Singh under various sections of the Indian Penal Code—including 292 (sale of obscene books, etc), 293 (sale of obscene objects to young people), 509 (word, gesture or act intended to insult the modesty of a woman)—and section 67A of the Information Technology Act.

On a more amusing note: Other Indians chose a more polite way to show their disapproval. The generous residents of Indore set up a collection to “donate” clothes to Singh:

And still others showed their support for Singh by, umm, following his lead. Example: Tamil actor Vishnu Vishal: 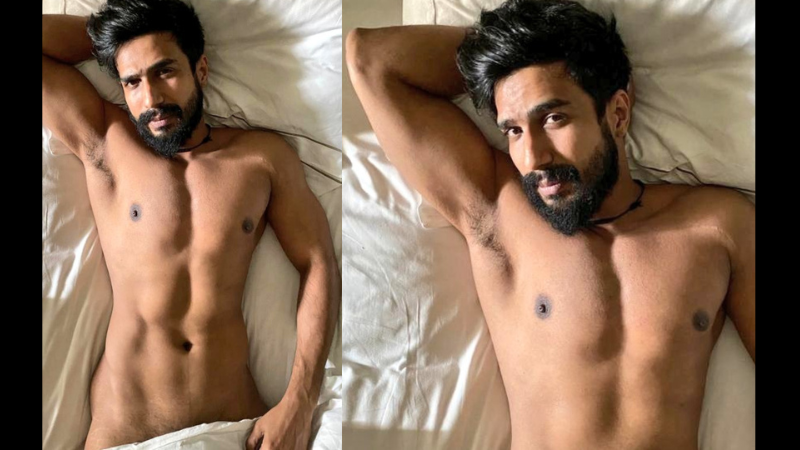 Is Singh really guilty under these laws?

Our laws are so vaguely worded it is almost impossible for any of us to be innocent lol! Let’s look at the charges one by one.

One: Section 509 covers any word, gesture or act intended to insult the modesty of a woman—and carries a prison term of up to three years. This is intended to punish ‘eve teasing’—i.e. sexual harassment of women in public spaces. What is key is the “intent” to outrage/insult, which is a little hard to prove in this case. After all, no one told Chaubey to go look at Singh’s photos—and run the risk of being outraged etc. And it is hard to prove that the aim of the photoshoot was to do so, since plenty of women have remained un-insulted.

Two: The rest of the charges are related to obscenity:

Point to note: Of the lot, the last is the gravest offence. It carries a prison term of up to five years—and is non-bailable. But most of these laws make exceptions for material that promotes the public good in the interests of science, literature, art, learning, religion or heritage.

Defining obscenity: Section 292 defines something as obscene “if it is lascivious or appeals to the pruri­ent interest or if its effect…is to deprave and corrupt persons.” That’s pretty vague so the courts have come up with their own tests to decide if something is obscene.

The Hicklin Test: Indian laws are shaped by colonial-era jurisprudence—and derived from an 1868 English court ruling in Regina vs Hicklin. The Hicklin test assessed the ‘crime’ from the viewpoint of the consumer of the content: “material was obscene if it tended to deprave or corrupt the people into whose hands it was likely to fall.” And this standard was defined by how it affected “the most vulnerable constituency.”

The Udeshi case: In a 1965 judgement, the Supreme Court revisited the test in Ranjit Udeshi vs State of Maharashtra—which involved a ban on DH Lawrence’s ​​‘Lady Chatterley's Lover’. While the Court upheld the ban, it also ruled that a work of art must be viewed as a whole—and in context—to be defined as “obscene.”

The Roth Test: Over the years, the Indian courts further liberalised the standard—shifting from the “most vulnerable constituency test” to that of the “average, reasonable and strong-minded reader.” In 2014, the Court finally set aside the Hicklin Test in Aveek Sarkar vs State of West Bengal. The 21-year-old case involved the cover photo of Sports World—featuring a naked Boris Becker with his equally naked fiancee Barbara Feltus: 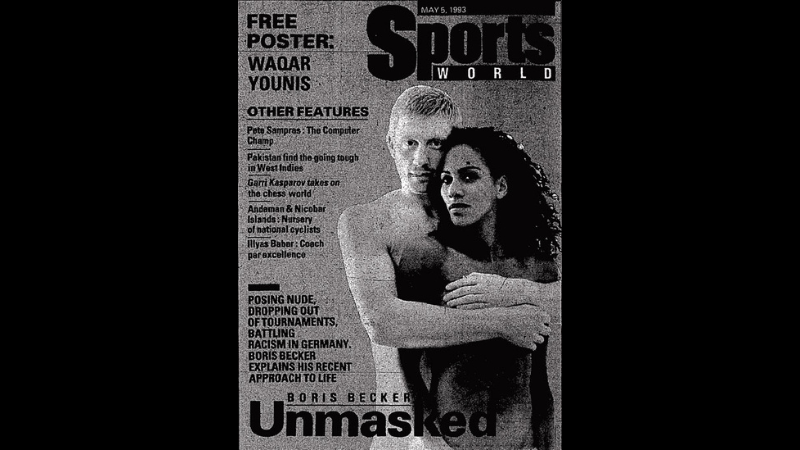 The Court dismissed the charges by adopting the US precedent Roth vs US, which holds:

“The standard for judging obscenity, adequate to withstand the charge of constitutional infirmity, is whether, to the average person, applying contemporary community standards, the dominant theme of the material, taken as a whole, appeals to prurient interest.”

In the case of Becker, the intent was to challenge racism, as the tennis star made clear: “The nude photos were supposed to shock, no doubt about it…. What I am saying with these photos is that an inter-racial relationship is okay.” Hence, the court ruled: “a picture of a nude/semi-nude woman by itself could not be called obscene, unless it had the tendency to arouse the feeling of an overt sexual desire.”

Point to note: Indian courts have mostly weighed in on the side of art and freedom of expression. In the past, they’ve struck down obscenity charges against MF Hussain’s paintings and Perumal Murugan’s novel ‘Mathorubhagan’—where it noted:

“[T]here are different kinds of books available on the shelves of book stores to be read by different age groups from different strata. If you do not like a book, simply close it… in our society, we seem to be more bogged down by conservative Victorian philosophy rather than draw inspiration from our own literature and scriptures.”

The closest parallel: to the Ranveer Singh photoshoot is a 1995 case involving an ad for Tuff’s shoes—which did not involve art or literature. Milind Soman and his girlfriend Madhu Sapre posed naked—covered only by a python: 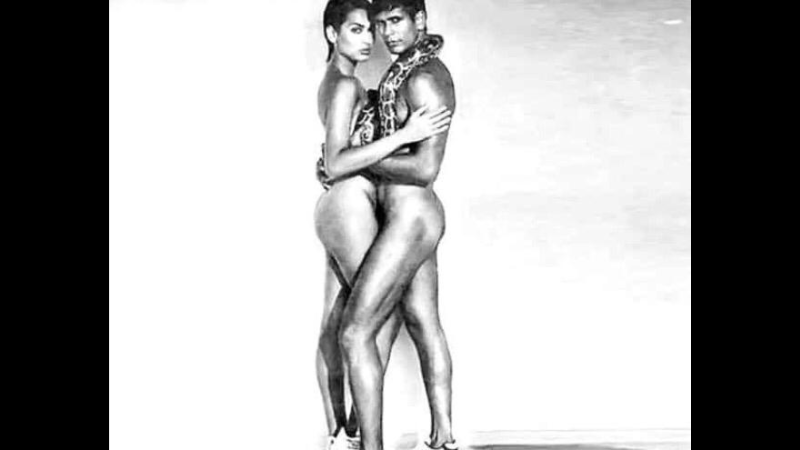 The ad was banned—and the two models were charged with violating the Indecent Representation of Women Act—and subsequently under Section 292(A). The ad agency was booked for cruelty to animals—and its managing director was arrested. Both cases were thrown out after being dragged out for years. In 2009, the additional chief metropolitan magistrate finally found: “it was impossible to label the Tuff Shoes print ad as obscene as it was not an incentive to sensuality and nor did it bring ‘impure thoughts’ in the minds of the person of a normal temperament”—and declared it “too conservative an approach cannot stand the test of time.”

So why does the police keep filing these cases?

Probably because it offers excellent nuisance value. And there is no clear criteria for a police case—as we can see below.

In hot water: Soman was again booked in 2020 for this Insta photo of him running naked on a Goa beach: 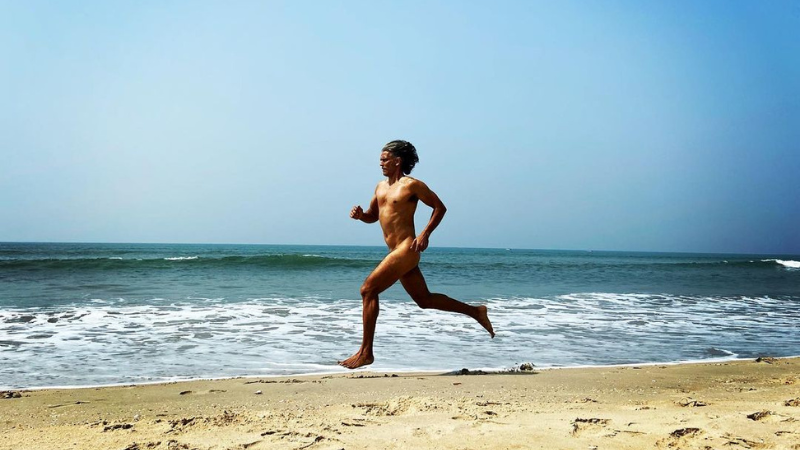 As were actor Poonam Pandey and husband Sam Bombay—for a photoshoot, again in Goa in 2020. In their case, the couple was arrested and then released on bail. The case is still pending in the courts. Also booked on charges of obscenity, Aamir Khan for the poster for ‘PK’: 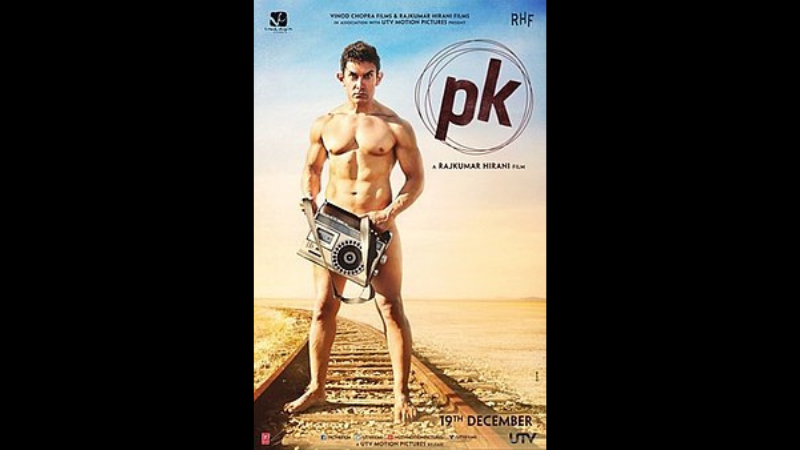 Got away scot-free: Vijay Deverakonda who posed for a PK-like poster for the upcoming flick ‘Liger’: 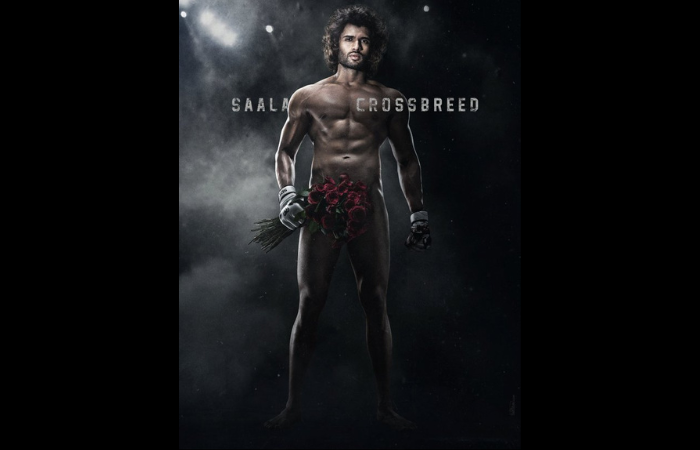 Never charged for their equally revealing photoshoots: Sangram Singh and Anil Kapoor (which really ought to be a crime lol!): 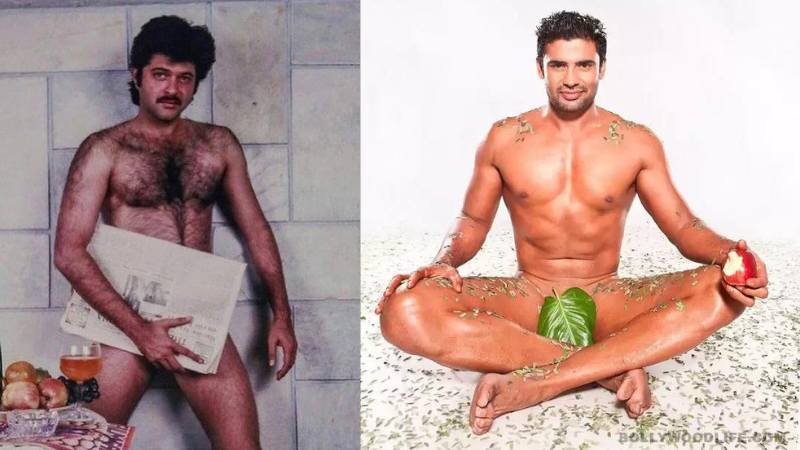 The big religious exception: The reality is that India is awash with naked men—of the religious kind. They are almost never booked on obscenity—presumably because they fall under the exception for religion. There are the Naga sadhus who let it all hang out, having ceded all worldly belongings, including their clothes: 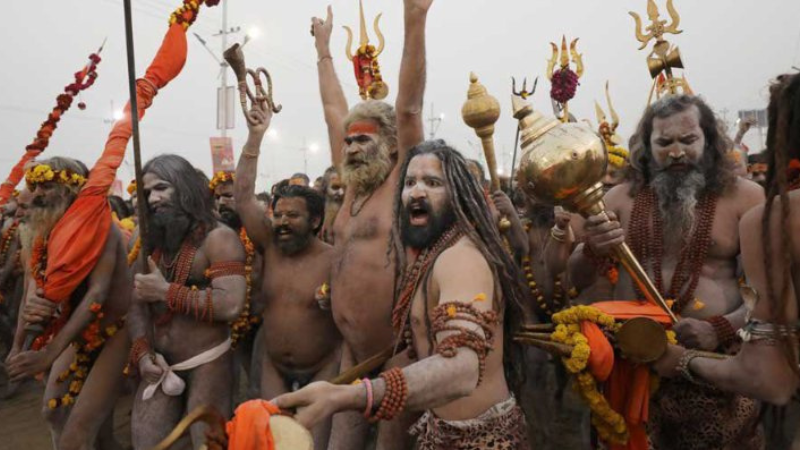 Also, Digambara Jains: who believe that monkhood can only be achieved by “having no worldly possessions” and “demonstrating indifference to earthly emotions such as shame.” This is presumably why they are not outraging the modesty of Sonia Gandhi in this picture: 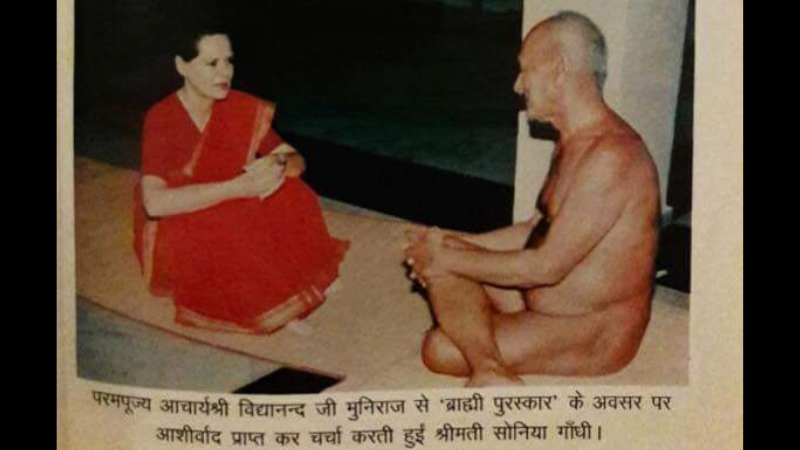 Point to note: The Digambara nuns are fully clothed:

It’s also why the nuns cannot achieve moksha without being reborn as men—because “nakedness is an essential element of the road to liberation.” Hah, talk about a double standard!

The bottomline: As all good Kannadigas would say, we Indians really need to chill maadi. Also this: as you can see in this Big Story, we are proud to embrace the body diversity of Indian men;)

You can see all the Singh photos and read the profile over at Paper Magazine. Indian Express has a more detailed report on the FIR. This New Indian Express op-ed offers a stirring defence of Naga sadhus—and why they shouldn’t be compared to naked Bollywood types. This legal blog has the best analysis of the legal history of obscenity laws—along with this Indian Express explainer. CNBC18 looks back at the controversy over the Tuff’s Shoes ad—while Indian Journalism Review looks at the Becker cover image. Pune Mirror has the best selection of naked Indian men.