Chaos and suspensions in Parliament

A record 19 members of the opposition were suspended for a week from the Rajya Sabha. Their crime: disrupting the House—by shouting and holding placards. That’s the highest number to be kicked out in one fell swoop. On Monday, four Congress MPs were suspended for the entirety of the monsoon session in the Lok Sabha. The main issue of contention: rising inflation accompanied by the hike in GST rates (explained here). Meanwhile, Rahul Gandhi was detained for protesting against the increase in GST. (The Telegraph)

Also in chaos: The Tory debate between the two leading contenders for the prime minister gaddi—Liz Truss and Rishi Sunak. The live event went abruptly off air when the anchor Kate McCann fainted. Watch the clip below. Also: does Sunak stay frozen in place—while Truss walks toward McCann to help? (The Guardian)

The International Monetary Fund has been rapidly slashing its predictions for the rate of global growth over the past months—from 4.9% in October, 4.4% in January and 3.6% in April. The latest number: 3.2% this year. But the biggest dip is in the projected number for 2023: 2.9%—down from 3.6% in April. And the IMF warned that the actual slowdown could be far worse: “The risks to the outlook are overwhelmingly tilted to the downside.” (Wall Street Journal)

As for India: Our predicted growth rate for this year was sharply cut from 8.2% to 7.4%—and by 0.8 percentage points to 6.1% next fiscal year. That said, we will still be one of the fastest growing economies in the world—second only to Saudi Arabia. Mint has more details.

The International Space Station is a joint project between five countries—and is set to expire in 2024. The US, however, wants to extend it for another six years. But relations between the US and Russia have been wearing thin ever since the Ukraine invasion. Moscow finally announced that it’s pulling out in 2024—and will set up its own space station instead. But sceptics claim it doesn’t have the money for anything that ambitious—and is just blowing a lot of hot air. Not blowing hot air: Beijing which is very close to setting up its space station. So it could well be Russia’s new space partner instead. (BBC News)

A report released after an investigation into allegations of racism is being described as “the most devastating verdict to be delivered on any sporting institution in the United Kingdom.” What it found: 448 examples of institutional racism—and failure to meet 29 out of 31 indicators of good practices. At least 34% have experienced racism—while 62% were aware of racist incidents. FYI: The entire board of Cricket Scotland resigned one day before the report was released. (The Guardian)

Diabetes: There’s a new eating advisory for diabetics. A small Dutch study revealed that eating all meals within a 10-hour window—and having dinner by 6 PM—helps lower blood sugar levels in patients. It suggests that prolonged fasting may actually be good for those with the Type-2 version of the disease. (The Telegraph)

Child hepatitis: For over a year, doctors have been worried about mysterious cases of liver failure in children—many of them under the age of five. There have been over 1,000 cases spread across 35 countries. UK doctors claim to have discovered the cause: lowered immunity due to the pandemic, which kept them at home:

“When the restrictions were lifted, children began to mix, viruses began to circulate freely—and they suddenly were exposed with this lack of prior immunity to a whole battery of new infections.”

This rare form of hepatitis was triggered by the common adenovirus—which causes colds and stomach upsets—in conjunction with a secondary virus that usually causes no illness. (BBC News)

Companies like Google, Microsoft, Meta and Amazon want to get rid of ‘leap seconds’. These are added to compensate for the fact that Earth rotates at an irregular rate—sometimes slowing or speeding up. So scientists add these seconds, 27 since 1972, to the world clock to even things out. And here’s why it messes up computers (Thank you, The Verge, for this excellent explanation!):

“I mean, just imagine you’re a computer. You have a very clear sense of time. You know that there are 24 hours in a day, 60 minutes in an hour, and 60 seconds in a minute: all neat and tidy. Then, on some random day as you await the coming dawn, you watch with horror as your internal clock ticks over from 23:59:59 to the previously-undreamt-of time of 23:59:60. Quite naturally you freak out. Maybe you crash a little, just to calm your nerves. As a result, you take down some of the biggest websites in the world. Everyone gets mad at you.”

Naturally, tech companies hate ‘leap seconds’. Meta wants to replace it with something else. One suggestion: ‘smear seconds’—where clocks are slowed down and the second is spread across a period of hours in a single day. But there are no guarantees it will work either. (The Verge or Cnet)

The Alps are melting

The glaciers on the mountain range are shrinking at a record rate and will lose the greatest mass in 60 years. The temperatures have been so hot this summer that the elevation at which water froze also hit a record high—5,184 metres which is higher than Mont Blanc. What’s notable: scientists have long predicted that glaciers will melt due to climate change, but this is way faster than expected: “We are seeing model results expected a few decades in the future are happening now. I did not expect to see such an extreme year so early in the century.” Sigh! (Reuters)

An amusing side-effect: The melting glaciers have shifted the border between countries—much to the dismay of an Italian lodge that now finds itself in Switzerland. In fact, that bit of land has been the focus of hectic diplomatic negotiations, with Rome calling it a “complex international situation.” (The Guardian)

Meanwhile, in China: Searing heat waves have triggered rolling blackouts as electricity usage hit record levels. More than 300 cities were forecast to reach temperatures above 35°C on Tuesday. (The Guardian)

One: Sonia Gandhi was once again summoned for questioning as part of a probe into money laundering at the National Herald newspaper. Congress leaders who protested—like Srinivas BV—were literally dragged away by their hair. We can only imagine what’s in store for the aam aadmi the next time they take to the streets. (Hindustan Times)

Two: Pope Francis apologised for the horrific abuse meted out to indigenous children at Catholic residential schools in Canada. This historic moment is worth watching if only to see the emotions play across the faces of the tribal communities in the audience. FYI: we highly recommend hitting mute and relying on subtitles. The interpreter’s voice is likely to send you into a coma. (Al Jazeera)

Three: The legendary Joni Mitchell put on a full public performance for the first time in two decades. She showed up at the Newport Folk Festival in Rhode Island—much to the surprise of delighted fans. (Rolling Stone)

Four: In Karnataka, a pet African Grey Parrot named Rustoma flew away when a door was left open. Her distraught family searched high and low—and even consulted a priest. She was finally returned by a couple of good samaritans—who were handsomely rewarded (Rs 85,000) for their efforts. But this is the bit that made us go ‘awww’:

“But the shock of Rustoma's disappearance has got the family wondering whether the birds would be happier in a larger environment like a zoo in India or abroad. ‘Don't parents send their children abroad so they can study and do well in life? It is not necessary for the children to live with us,’ he says. ‘If they will be happier there, we are prepared to stay away from them.’”

You can see Rustoma with her pal Rio below. (BBC News) 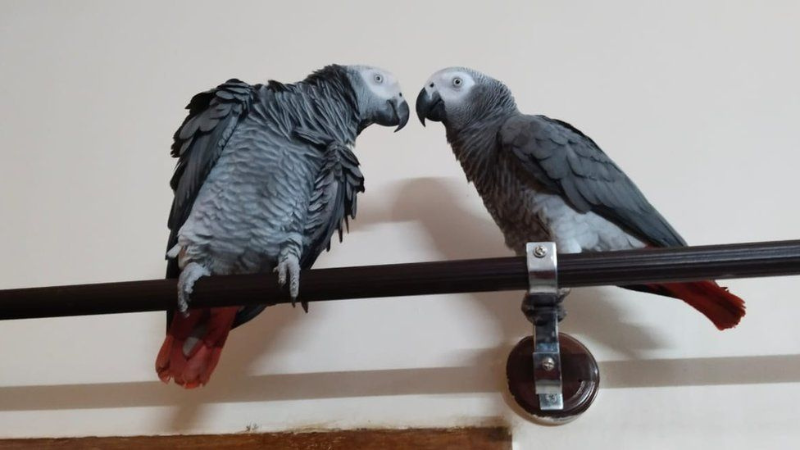 On the latest episode of the splainer podcast ‘Press Decode,’ the team discusses the great bra ban and other bizarre exam rules—and racism in wildlife conservation. Be sure to head over to the IVM website, Spotify or Apple Podcasts to listen to it.