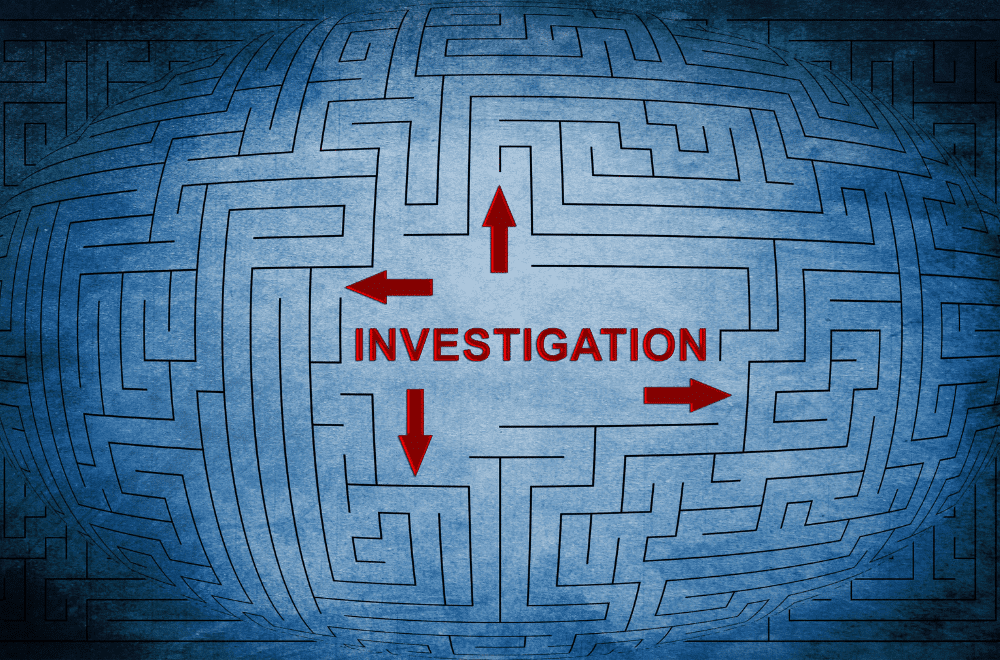 The Wire, Meta & the BJP: A heated investigative journalism debate

This is a bizarre drama involving India’s leading liberal news site, a global tech company and the ruling party. Over the past 36 hours, Twitter has been ablaze with a transatlantic war over The Wire’s investigation into Meta’s policies—which allegedly favour the BJP. But there is nary a word of reporting in the mainstream Indian news sites. We lay out the elements and leave you to make up your own mind.


Editor’s reminder: In case you find this Big Story valuable, you can share a gift link to this edition with anyone you like—or post it on social media. You can find the link right on top of the edition on the browser—or on the first Quote section on the app. No logins required.

How it all started…

Instagram recently took down a number of posts shared by @cringearchivist—an anonymous handle run by a group of academics and journalists. The reasons for doing so were unclear in a number of cases. For example, a video of an Ayodhya resident worshipping Uttar Pradesh CM Yogi Adityanath was cited for “sexual activity and nudity.” It was allegedly removed within minutes. (FYI: Their Insta account is now private, but you can check out their Twitter handle)

Next, The Wire investigation

On October 10, the news site published an explosive piece claiming that the posts were removed on the request of the BJP’s Information Technology chief Amit Malviya. This was allegedly done as part of Meta’s XCheck (CrossCheck) program—which is a list of elite users who have special privileges.

The XCheck list: was a carefully guarded company secret until it was exposed by the Wall Street Journal back in 2021. Internal documents showed that Meta (then Facebook) gave special privileges to VIP accounts—including those of celebrities and politicians. The 5.8 million accounts were deemed “newsworthy,” “influential or popular” or “PR risky.” And they were exempt from the company’s content guidelines—free to post whatever they wanted:

“Some users are ‘whitelisted’—rendered immune from enforcement actions—while others are allowed to post rule-violating material pending Facebook employee reviews that often never come. At times, the documents show, XCheck has protected public figures whose posts contain harassment or incitement to violence, violations that would typically lead to sanctions for regular users.”

The examples included soccer star Neymar who shared nude photos of a woman who had accused him of rape. But the Journal only found that the content shared by these users were treated “more deferentially” to avoid “PR fires”—"negative media attention that comes from botched enforcement actions taken against VIPs."

Point to note: At the time, Facebook’s PR chief Andy Stone did not deny the authenticity of the documents. He instead told WSJ:

“A lot of this internal material is outdated information stitched together to create a narrative that glosses over the most important point: Facebook itself identified the issues with cross check and has been working to address them.”

And the company had claimed that it will roll back the program in 2021.

The Wire investigation: claimed to show that XCheck users in India had even greater powers. According to The Wire, the @cringearchivist’s posts had been taken down because they were reported by the BJP IT chief Malviya—who is supposedly on the XCheck list in India. And it backed the claims with what seemed to be screenshots of internal reports which state: “Skipped auto moderation. Reason: Reporting user has XCheck privileges.” And the piece made this sweeping claim based on its investigation:

“The company has given Malviya two levels of privileges—he can post as he likes, without the rules governing the platform applying to him, and he can impose his will as he pleases to have posts critical of the BJP, the Union government, or right-wing Hindu politics, deleted.”

Point to note: The evidence for the report was attributed to “a well-placed source at Meta”—who also claimed that Malviya had successfully taken down 705 posts just in September. Editor Siddharth Varadarajan later said that reporting for this story—and the follow up—are “based on information from sources we know and trust within Meta.”

Now, Facebook/Meta has been embroiled in a series of PR bonfires since the Cambridge Analytica scandal came to light back in 2018. And much of the reporting exposing its practices has been based on internal documents leaked by whistleblowers. The company has never once questioned the authenticity of these documents before. But it decided to make an exception for The Wire.

“Where to even begin with this story?! X-check has nothing to do with the ability to report posts. The posts in question were surfaced for review by automated systems, not humans. And the underlying documentation appears to be fabricated.”

Interestingly, he did not deny the existence of XCheck—but insisted that its privileges did not extend above or beyond the WSJ revelations.

The Wire’s big comeback: The news site doubled down on its claims—this time publishing what appeared to be an internal team email from Stone—along with this screenshot: 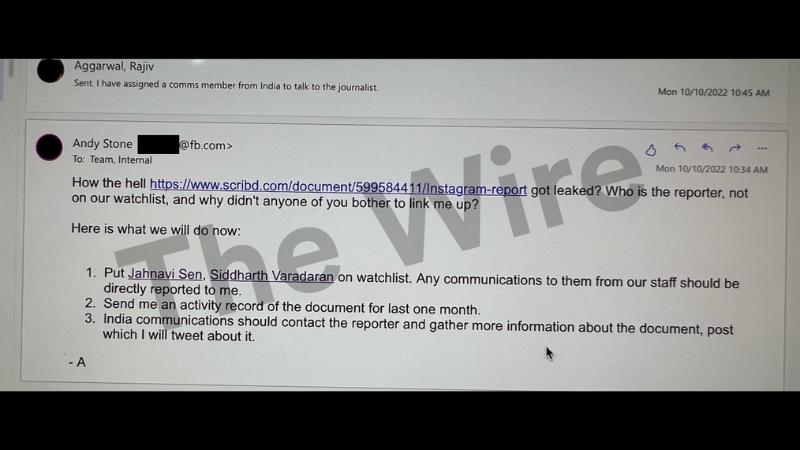 The email reads: “How the hell [PDF link to an Instagram report] got linked? Who is the reporter, not on our watchlist, and why didn’t any of you bother to link me up?” This was presented as damning evidence that The Wire’s claims were true—and Stone was lying in his tweet.

Meta also doubles down: Soon after The Wire published the email, the company’s Chief Information Security Officer (CISO) Guy Rosen tweeted out a short thread, where he laid out his evidence as to why the documents were fake:

Rosen claimed there was no media “watchlist”—and that “these accusations are outlandish and riddled with falsities. Let’s hope @thewire_in is the victim not the perpetrator of this hoax.”

The heated debate over ‘evidence’

Now, it is very unusual for Meta to get into an open Twitter war with a news outlet. And since the battle played out in public, journalists around the world—including the US—got into the fray.

The naysayers: included Facebook whistleblower Sophie Zhang—who concluded the Instagram internal reports are indeed “fake”—citing her own experience and after checking with current employees. But she also thinks that they were deliberately forged to mislead The Wire:

“Assumption is ‘faked by former/current FB employee familiar with India, but far from integrity systems.’ 5-10% chance ‘they're real but use really weird/niche systems that look weird to most people’”

Also going viral: is this thread by Shoshana Wodinsky—the enterprise reporter for MarketWatch. She picked on the email from Stone, writing:

But, but, but: There are others who have questioned Wodinsky’s claims. For example, technology reporter Sam Biddle who tweeted: “I have no idea what's going on here/don't have any stance on the underlying story at this point but I will say Andy emailed me from an @fb.com account on 8/31/22.” And others say that it is entirely possible to have an internally registered subdomain like “http://instagram.workplace.com”—since Meta owns Workplace.

In sum: There simply isn’t enough tech metadata on these documents in the public domain to determine their authenticity—as privacy expert Pranesh Prakash points out.

Key point to note: While the tech-based claims are being debated, everyone agrees that the language used in Stone’s email is suspect. Even prominent BJP critics like Aakar Patel noted: “language and punctuation in email is unusual (sounds desi).” And tech expert Alex Stamos offered this red flag:

“Free tip for journalists: if somebody leaks a discoverable corporate email from an FB comms person with a decade working in political campaigns reading ‘How did we get caught doing the bad thing! Oh no, we are guilty and it is bad!... then you are probably getting played.”

Where we are now…

The Wire: is standing by both of its stories—and is refusing to retract them. Nor does it seem likely that it will release any more information about the documents or its source. Editor Varadarajan tweeted:

“These documents were triangulated with other elements of the story that we reported. Meta’s strategy is to try and push us in to a corner with its preposterous ‘fabrication’ charge and force us to reveal information which may compromise our sources. This isn't going to happen!”

Meta: appears to have moved on—other than Stone gleefully retweeting the many questions raised by US journalists about Wire’s reporting.

Bigger worry #1: even among those who question the reporting is that The Wire was deliberately set up:

“The Wire just destroyed their credibility, the BJP is setting up a government agency to oversee content moderation and Facebook's products will be extremely important in the 2024 elections so, yeah, this could have been an extremely successful op against opposition journalism.”

FYI: Meta seems to be quite happy with this theory—minus the BJP angle, of course. Stone RT-ed a tweet that reads: “It’s really sad to see them fall, and double down, for such an obvious fake. We need strong independent media willing to stand up to populist governments and big companies, but this ain’t it.”

Point to note: Setting the BJP’s involvement aside, prominent liberal journalists have been targeted with similar scams. Example: NDTV anchor Nidhi Razdan fell for an elaborate hoax pretending to offer her a prestigious position at Harvard University.

Bigger worry #2: Lost in the brouhaha is the original ‘crime’ that triggered the investigation—the arbitrary takedown of @cringearchivist’s posts. Does Meta have a pro-BJP content moderation policy in India—especially given the government’s strict new rules for social media? That question has been left hanging for now.

Bigger worry #3: Not a single mainstream Indian news outlet has touched this story—not even the liberal/independent sites. TechCrunch offers this reason for the deafening silence:

“In a way that separates it from most other companies, Facebook has earned a reputation where its denials are not really taken on face value. This is the reason why at least two major outlets in India have chosen not to acknowledge Wire’s story — nor Meta’s denials of those reporting, according to two people familiar with the matter.”

But it seems unlikely that Meta’s lack of credibility is the key motivation here—since the Indian media has readily republished other damning allegations about its India activities.

Bigger worry #4: It is easy to criticise The Wire, but as a number of Indian journalists point out, our newsrooms—especially the independent kind—lack the resources to do the meticulous investigative work we see in the West. That’s a real problem in a democracy.

The bottomline: Our take is that The Wire was far too much in a hurry to publish the documents—fake or not—which is rare in newsrooms around the world. Newspapers like the New York Times and the Wall Street Journal spend months vetting and rechecking their evidence before they publish such explosive allegations. Also: all human beings are the most vulnerable to ‘proof’ that confirms our assumptions. This is why journalists have to always wait, wait, wait until they are entirely sure. After all, in these fraught times, we all know who has the most to lose here.

We pulled together most of this information from tweets. So there isn’t much to recommend. But you can read the original Wire investigation here—and the followup with Stone’s email here. Here’s a gift link to the original Wall Street Journal investigation into XCheck. This Stanford report opens a separate can of worms—a network of Twitter accounts originating in India—and maybe operated by a branch of the Indian army.