A BCCI shocker for Sourav-da

The president of the cricket board has been pushed out of his job. Sourav Ganguly will not get a second term and will be replaced by former test player Roger Binny—who is currently the head of the Karnataka State Cricket Association. Ganguly was offered the chairmanship of the IPL—but he declined it, hoping to land the top job at the International Cricket Council—cricket’s world governing body. But that isn’t going to happen either.

As always with cricket, the reshuffle is all about politics. Indian Express views the move as the confirmation of Jay Shah as the real power behind the throne. He gets a second term as secretary—and all the incoming BCCI office-holders are key BJP leaders. The Telegraph claims Ganguly’s ouster reflects the wishes of “an influential Union minister.” Both can be true since Shah’s papa is Amit Shah.

The current CJI UU Lalit—who served only 74 days—has named his successor who will take over on November 9 when he retires. Justice DY Chandrachud will serve a longer two-year term—and has a stellar track record on constitutional matters. As The Hindu describes it:

“Justice DY Chandrachud, who sees dissent as the ‘safety valve of democracy’, is known for his profound judgments and dissenting opinions which prick the conscience of the powerful and challenge the regressive while displaying ability, conscientiousness and a high sense of justice.”

We will have a lot more details in our Big Story tomorrow. For now check out The Telegraph for more on his appointment and The Hindu on his judicial career.

The International Monetary Fund has downgraded its forecast for the global economy—which is now expected to grow by just 2.7% next year. That’s down from the 2.9% estimate offered in July. And its chief economist Pierre-Olivier Gourinchas darkly warned: “In short, the worst is yet to come, and for many people 2023 will feel like a recession.” Key factors include “Russia’s war against Ukraine, chronic inflation pressures, punishing interest rates and the lingering consequences of the global pandemic.” The forecast for India’s growth has also dipped sharply to 6.8%—from the earlier projection of 7.4%. (AP, The Telegraph)

Who is more likely to get ‘long Covid’?

New research published in JAMA has identified two kinds of patients at the greatest risk of developing ‘long haul’ Covid—which includes ongoing respiratory symptoms, persistent fatigue with bodily pain or mood swings and cognitive problems. The first are people who have a serious infection and require ICU care. At least 43% of such patients experienced at least one of the symptom clusters, three months after infection. But more surprisingly, women account for an estimated 63% of long Covid cases worldwide. And 10% of them were under the age of 20. (Forbes)

Switzerland: New research shows that the country has done a spectacular job of saving over half of its endangered frogs, toads and newts. Of the eight endangered species, 52% increased their regional populations and 32% were stabilised. This is the happy result of a large-scale conservation effort launched in 1999—soon after the European tree frog disappeared in the region of Aragau. The secret of its success is absurdly simple—ponds: “State authorities, non-profit organisations, private landowners and hundreds of volunteers worked for 20 years to build 422 ponds” giving the amphibians new spaces to thrive. Why this matters:

“Species will come, they will settle and start using the space if you offer it to them… Habitat loss is one of the main problems, and just by addressing that we could see the difference it made, and begin the recovery of these species… The key message is that it pays to do something, even if it feels overwhelming.”

Indonesia: The government has taken an entirely different tack to preservation—prioritising denial over action. The government insists the nation’s orangutans are continuing to “grow and thrive.” But in a Jakarta Post op-ed, five foreign researchers bluntly declared, “A wide range of scientific studies … show that all three orangutan species have declined in the past few decades and that nowhere are populations growing.” They were promptly accused of having “discredited” the government and have been banned from doing research in Indonesia. And all visiting researchers will now be identified and monitored. Science has more on this dismal policy of blocking conservation research in the name of nationalism.

Iranian protest song for a Grammy?

The Grammys next year will include a new award that honours the best song for social change. This is a special prize that “recognizes creators of message-driven music that responds to the social issues of our time and has the potential for positive global impact.” Already leading in the category: Shervin Hajipour’s song ‘Baraye’ (For) that has become a protest anthem in Iran. It accounts for 95,000 out of the 115,000 submissions received by the committee. FYI: Hajipour has been arrested and is now out on bail. We shared this song in our Headlines section recently, but you can watch it again below. (Variety)

In less appetising music news: The singer Rex Orange County—aka Alexander O’Connor—has been charged with six counts of sexual assault. He allegedly assaulted a woman twice in London’s West End and then again four times the next day. The Guardian and Buzzfeed News have more details.

In equally unhappy news: 15-year old Rahul Koli—one of the six child stars in ‘Chello Show’—has died after a struggle with leukaemia. The movie—which is India’s official entry for the foreign language Oscar—was his debut performance. (Times of India)

And the world's coolest neighbourhood is…

Forget entire cities. Time Out now ranks neighbourhoods around the world—highly rated for being “areas with accessible, cutting-edge culture and nightlife; brilliant and affordable food and drink; lively street life and big community vibes.” The top of the list is Colonia Americana in Guadalajara, Mexico—highly touted as “an edgy blend of art deco and neoclassical mansions with artists’ squats and warehouses containing some of the city’s best music venues.”

Next is Lisbon's riverside Cais do Sodré, which is both known for its nightlife and as a mecca for foodies, followed by Wat Bo Village, in Siem Reap, Cambodia and New York City's Ridgewood. The only Indian entry on the list is Bandra West—which comes in #45—and is described as “the perennial queen of Mumbai’s suburbs.” Suburbs? Y’know this was written by a SoBo type lol! Time Out has the full list.

One: Here’s yet another cautionary tale about spending big on art. Researchers have discovered that one of the most iconic works by Johannes Vermeer may have been painted by his, um, assistant or a student. This is the Dutch artist best known for ‘Girl with a Pearl Earring’—which also inspired a movie of the same name.  But the ‘impostor’ painting is titled ‘Girl with a Flute’—which apparently lacks “the artist's signature precision and paint application.” Below is a collage of two paintings: the one on the left is the impostor, while the one on the right features the exact same model, but is a real Vermeer. (CNN) 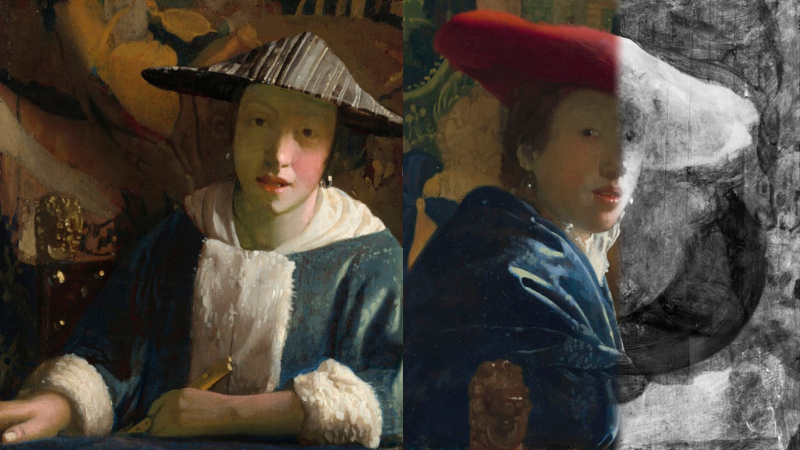 Three: Yesterday, Big B celebrated his 80th birthday with son Abhishek and wife Jaya on his popular quiz show ‘Kaun Banega Crorepati’. The video below rounds up the highlights. Yes, he got a bit weepy. (The Telegraph)