The Ukraine invasion: A key update

An important bridge connecting Russia to Crimea was blown up on Saturday—destroying a critical supply route for arms, ammunition and other military supplies. And it could significantly harm Moscow’s attempt to hold off Ukraine’s advances in the south. The reason:

“The Russian military relies heavily on rail transport for its logistics, and the critical, direct rail line passes over the damaged bridge… Ferry service would be less reliable and more vulnerable to drone strikes…  and Russia’s land bridge of occupied territory that connects southern Ukraine to mainland Russia is increasingly within range of Ukrainian artillery.”

The bridge also has great symbolic value to President Putin—who inaugurated it with great fanfare in 2018—to mark the permanent annexation of Crimea from Ukraine.

President Putin called it a “terrorist attack” and blamed Kyiv—which has not claimed credit. You can see the bridge in flames below:

Meanwhile, in Moscow: Russia has appointed a notorious general—Sergei Surovikin— as its first overall commander for the war in Ukraine.  He is best known for opening fire on pro-democracy protesters in the 1990s—and ordering indiscriminate bombing in Syria. The Guardian has more on Surovikin. Also watch: this CNN video report of clips being shared by Russian troops—who are complaining of terrible conditions and morale.

Meanwhile, in Oslo: The Nobel Peace Prize was jointly awarded to two groups and one individual. All of them have one thing in common: they have been targeted by the Russian government and its allies. Belarus activist Ales Bialiatski is in jail for opposing the dictatorial rule of President Alexander Lukashenko—who is Putin’s BFF. Memorial was founded in 1987 to highlight the brutalities of the Stalin regime—and continued to report on human rights issues until it was shut down in December last year. The Center for Civil Liberties in Ukraine has been documenting war crimes committed by Russian forces in recent months. (Associated Press, BBC News)

Protests in Iran over the killing of 22-year-old Mahsa Amini (explained here) entered the fourth week despite a bloody crackdown by the government. The current death toll: 185, including at least 19 children. A win for the uprising: the state-run TV channel was hacked, and the daily news bulletin was interrupted with this image of Supreme Leader Ali Khamenei with flames around him.

Also notable: This footage of the riot police joining the protests—though we can’t find any news report to confirm it:

On October 4, 10 Muslim men were publicly flogged for allegedly pelting stones during a garba celebration in a Gujarat village. The investigation, however, has mainly focused on the stone-pelting. The FIR named 43 Muslim men—of whom 18 have been arrested—though lawyers claim many of them are innocent. And the police are now making noises about a “criminal conspiracy.” Meanwhile, media reporting has focused on the village sarpanch Indravadan Patel. Muslim residents had asked him to ensure that the garba would not interfere with Eid preparations at a nearby mosque. Patel ignored their demand—which in turn led to a scuffle—and then the flogging.

The Print has a ground report—with the view of the Muslim community.

Thanks to strong winds that carried extreme heat, the heatwaves in North America are melting ice all the way over in Greenland. The region experienced the hottest September on record—with temperatures soaring 8°C higher than average. The result:

“The heat wave resulted in an unprecedented melt event for this time of the year that peaked between September 2 and 5, according to the NSIDC. On September 3, surface melting was happening on more than a third of the ice sheet, which stretches across about 600,000 square kilometres (232,000 square miles), an area equivalent to California and Nebraska combined.”

It has resulted in more than 30 billion tonnes of surface water flowing into the ocean. (Bloomberg News, Gizmodo)

Kanye does it again!

“I’m a bit sleepy tonight but when I wake up I’m going death con 3 [sic] On JEWISH PEOPLE. The funny thing is I actually can’t be antisemitic because black people are also Jew [sic]. You guys have toyed with me and tried to black ball anyone whoever [sic] opposes your agenda.”

This was soon after he was warmly welcomed back to the platform by soon-to-be Twitter owner Elon Musk. Ye has also been ‘restricted’ from posting on his Instagram account thanks to stuff he’s been spewing at fellow rapper Diddy—who took offence at the ‘White Lives Matter’ shirt Kanye wore at a recent fashion show. Gizmodo has all the details you need.

In other news about Meta: The company is suing Chinese developers for creating fake WhatsApp apps—used to hijack over a million user accounts. It has also identified apps disguised as games, VPNs, and photo editing tools dedicated to stealing Facebook credentials. These include 355 on Android and 47 on iOS. Gizmodo has that story as well.

The UK is considering new rules for the slaughter of farmed fish sold at supermarkets—recognising that they can feel “pain, stress and anxiety.” As per the proposal, fish will have to be stunned before they are killed. And it will put an end to “aversive” killing methods including “asphyxia, salt baths, ammonia baths and evisceration.”

Why this is important: the global production of farmed seafood (excluding algae) will overtake wild fish by 2030. Quote to note: “Fish are highly intelligent. They can navigate mazes, they have numerical skills and they have complicated relationships. They should be given the same protection as mammals.” (The Guardian)

In other good news: A year-long study in Delhi’s Asola Bhatti Wildlife Sanctuary (ABWS) shows that leopards are thriving in the city’s urban forests. At least eight have been spotted in the area.

“Sanjay Colony is highly human dominated area, despite this, leopards were seen visiting the area from time to time. An area of sanctuary touching…Chhatarpur region, followed by Neeli Jheel has witnessed the maximum sightings of these leopards, which indicates that they have adapted well along with humans.”

Is your friendship really ‘solid’?

New research claims to have determined the exact amount of time it takes to seal friendship. The answer: 34 hours. To be more specific: “The analysis found that the ideal formula for friendship involves 11 interactions, each lasting an average of three hours and four minutes, over the period of five and a half months.” It also found that on average a person has five close “shoulder-to-cry-on” friends. The data was analysed by   Oxford University professor Robin Dunbar, who coined ‘Dunbar’s number’—which is the maximum number of people with whom we can maintain stable social relationships. (Independent UK)

Director SS Rajamouli has submitted the blockbuster movie—which is getting loads of buzz in the West—in 14 categories, ranging from best motion picture to best visual effects. This is after ‘RRR’ lost out to the Gujarati flick ‘Chhello Show’—which was picked as India’s official entry for best foreign language film. FYI, Variety predicts that ‘Naatu Naatu’ will make it to the list of final nominees for best song.  (NDTV)

One: How do you congratulate someone who just won the Nobel prize in medicine? By throwing him in the pond, of course! That’s the tradition at The Max Planck Institute for Empirical Aesthetics in Germany—and its director Svante Pääbo was not spared either. Fun fact: Pääbo’s dad won the exact same honour forty years ago. (NPR)

Three: Ok, this isn’t exactly something to see, but we couldn’t help but flag this gem in foreign reporting on India. The New York Times’ travel section asked five photographers with “deep connections to India, Japan, Korea, Singapore and Thailand to share one of their favourite local dishes.” The Indian correspondent recommended the masala dosa at Sagar Ratna in Delhi. Fair enough, except for this concluding line: “A dosa meal for two costs around 800 rupees, or about $10, making it an inexpensive option for a quality meal.” Also: his dosas are apparently served with pudina chutney. Hain? Which Sagar Ratna did this guy eat at? (New York Times) 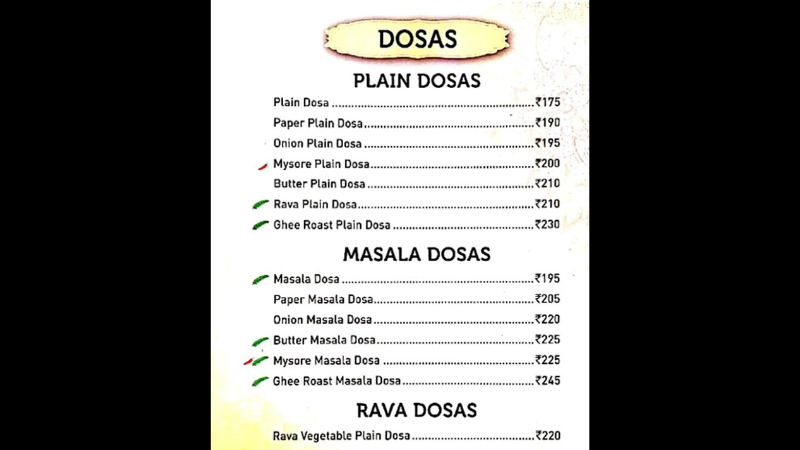