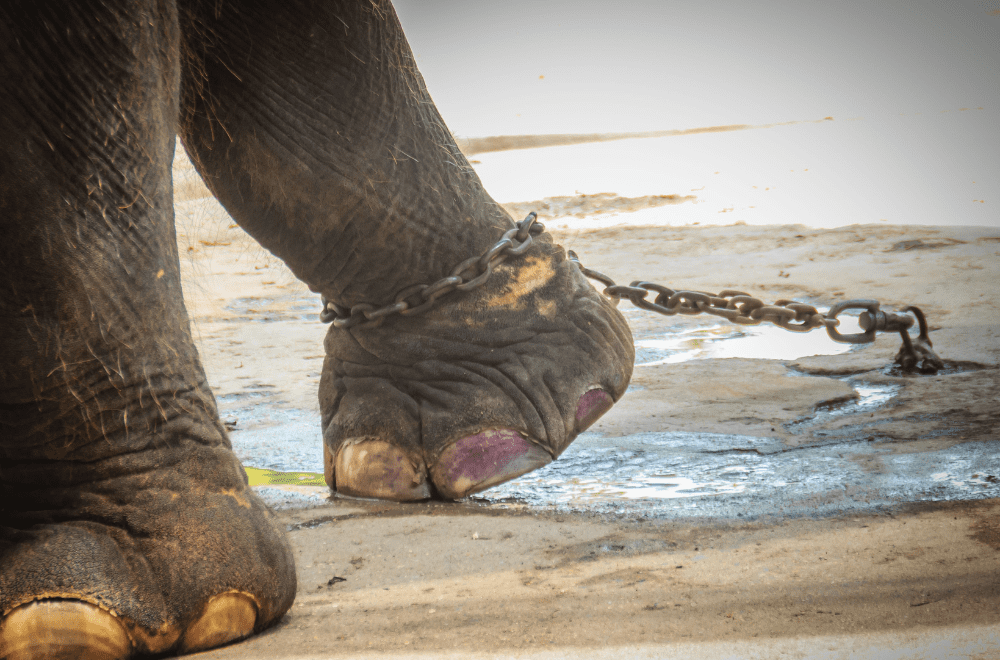 The story of Joymala: An elephant-sized tragedy

Tamil Nadu and Assam are warring over an elephant—which has been held captive at a temple for over a decade. But the greatest tragedy is that Joymala’s case is not exceptional or rare.

Tell me about Joymala…

For over a year, the animal rights group PETA has been calling out the cruel treatment of a 36-year-old elephant—currently being kept at the Srivilliputhur Andal temple in Tamil Nadu. Here’s what we know about Joymala—now named Jeymalyatha.

The original owner: Joymala was/is owned by Girin Moran who lives in a village in Assam. At some point—either 2008 or 2011—he gave the elephant to the Tamil Nadu government. The reason: he was having trouble feeding her. She was originally given to the Srivilliputhur Andal—but is now being kept at another nearby temple, Krishnan Kovil.

Who owns Joymala? Now, Moran claims to have leased Joymala out for only three years (older reports claim six months). If Joymala was leased, then Moran is still the owner. But supporters of the TN government have circulated images of the deed—that appear to show that this was a permanent “gift.” But experts say that the gift deed is illegal: “These are illegal transfers. Animals that are legally protected cannot be sold.”

The first allegations: emerged in 2019—in response to an RTI inquiry filed by an animal rights activist in Tamil Nadu. At the time, New Indian Express reported that Joymala was being illegally held at the temple—used for begging and religious rituals—on a six-month lease that had long expired. Interestingly, at the time, the state’s chief wildlife warden claimed he’d contacted his counterparts in Assam—demanding they take back seven elephants with illegal documents. Joymala was presumably one of them.

First evidence of cruelty: Joymala’s case went mostly unnoticed until February, 2021—when a clip of her being beaten by her mahout went viral. What was worse: she was at a 48-day annual rejuvenation camp where working elephants are sent to rest and recover. The two mahouts were suspended and booked by the forestry department. At the time, the Assam government asked Tamil Nadu to send Joymala back—noting that she does not have proper papers and is being ill-treated. But nothing happened.

The latest evidence of cruelty: In June, a clip surfaced of Joymala being beaten by her new mahout with a stick. PETA then sent an inspection team in July and found that she was still being abused. Here’s what their report says:

“Jeymalyatha is living alone, chained in a tin shed at Krishnan Kovil temple at Srivilliputhur on a concrete floor, wholly deprived of any pleasurable activities or mental stimulation, her intelligence fully neglected, and in conditions that cause physical deterioration and pain… she is secured in place with chains by both the front and hind legs for the majority of the day (up to 16 hours according to the current mahout).”

In fact, during the PETA inspection, the mahout used pliers to twist her skin when she didn’t follow his commands. Here’s a PETA image of Joymala chained to the floor: 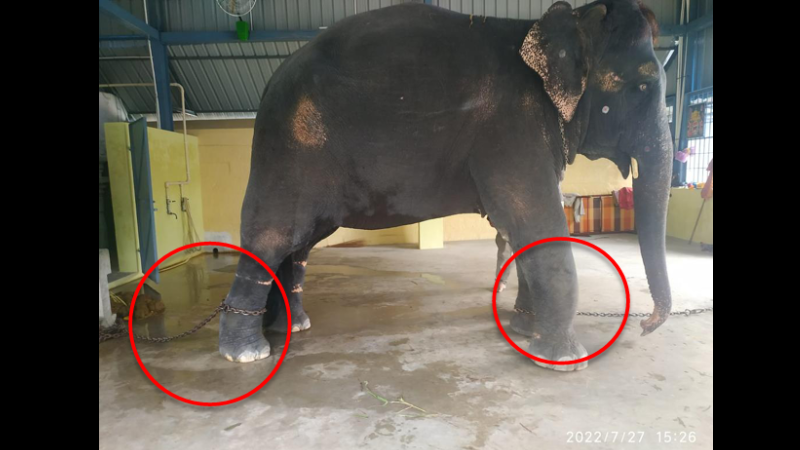 And here’s the image of the mahout with the pliers: 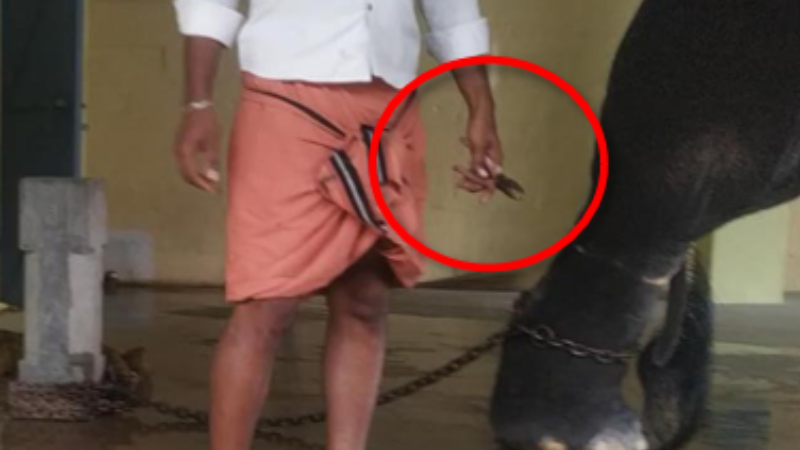 In August, PETA released its report and tweeted out this horrific clip of Joymala being ruthlessly beaten (it is very difficult to watch):

That’s terrible! Will someone rescue her now?

The Tamil Nadu government has denied all allegations of cruelty—claiming that the PETA videos are faked. Instead, authorities shared a clip of Joymala frolicking in a bathing tank:

PETA, in turn, dismissed the video as a PR stunt—and demanded that Joymala be sent immediately to a rescue centre.

Enter, the Assam government: As the PETA clips went viral, the Assam government sprung into action. It sent a four-member inspection team to check on Joymala’s condition—and “pave the way for the return of Joymala to Assam.” At first, the TN government refused to give access to the elephant—claiming her “case had become an emotional point for the state.” But after the Guwahati High Court issued a direct order, the team was allowed to see Joymala on September 19. They did not offer any comment on her condition:

“Our team took stock of Joymala’s health and welfare status. We also looked into whether she has been kept in a comfort zone and provided hygienic food in adequate quantity...We are planning to return to Assam by tomorrow. All necessary observations have been noted as were taken close to Joymala on the temple premises.”

But the team will likely present its findings to the Guwahati court later this month.

As for Tamil Nadu: The state government has flatly refused to return Joymala—and has found unexpected support from the Environment Ministry, which tweeted:  “Our beloved Joymala is now all hale and hearty. The present team is taking good care of the jumbo!”

But what do the laws say?

Before 1974, it was absurdly easy to buy and sell elephants. As one elephant owner told Mint: “It was like raising a buffalo or cow.” The Wildlife (Protection) Act passed in 1972 banned the commercial trade of elephants—but legitimised private ownership. New laws passed in 1974 now required a certificate of ownership.

The great legal exception: As Alok Hisarwala notes in Scroll, the elephant is the only wild animal that can be legally owned by a private individual. This exception was carved out by treating captive elephants differently from those in the wild:

This was also a nod to India’s long history of elephant ownership—which dates back to the Indus Valley Civilisation. In post-colonial India, the captive pachyderm remained part of the Indian landscape—as tourist attractions, temple mascots and wedding accoutrements.

Where we are now: The laws have evolved to both offer greater protection to captive elephants—and ban wild elephants from being taken into captivity. The rules have become stricter—making it hard to own an elephant. In 2002, the law was amended to allow only inheritance or gifting. The assumption: over time, the number of elephants in captivity would slowly dwindle. The compromise kept both the traditionalists and environmentalists happy—at least on paper.

Data point to note: As of 2019, there were 2,675 elephants recorded in captivity. But the numbers are far from accurate—thanks to a thriving illegal trade.

Enter elephant smuggling: In a 2020 RTI response, the government revealed that the private ownership of at least one in four captive elephants is not “supported by documentation”—i.e there are no certificates. Here’s what’s happening: elephants captured in the northeast are being shipped to other states—sold in underground markets. The worst offenders: Kerala, Uttar Pradesh, Karnataka, Assam, Tripura and Madhya Pradesh—which account for 96% of such illegal ownership cases. Many of them are sold to temples in South India—specifically, Kerala has the highest number of smuggled elephants.

A 2011 report from the Wildlife Crime Control Bureau lays out how this works:

“Gangs and network of elephant trafficking: Well-organised elephant traffickers are spread over various districts of Assam, Bihar and UP...Temples, religious organisations and political parties place their demand through messengers and sometimes directly through Government officials. Sadhus are sent by maths. Wildlife Crime Control Bureau information reveals that well-conversant traffickers visit interiors of Assam and Arunachal Pradesh and make direct purchase from the owners.”

Of course, all this is only possible with the collusion of government officials who turn a blind eye—or even help forge fake documentation.

Big point to note: These markets—where elephants are openly traded—are illegal as per the law. But the union government is readying new amendments to the law that will once again open the door to the commercial trade of elephants. This, in turn, will create even stronger incentives to capture wild elephants and sell them on the market.

The bottomline: Isn’t compassion the first principle of any religion?

The PETA report on Joymala is a hard read—but worth your time. The Print has details on the legal standoff between Assam and Tamil Nadu. Mint Lounge has the best analysis of the complicated debate over private ownership of elephants. Scroll focuses more closely on the law—and the proposed amendments that will legalise commercial trade. For more on elephant smuggling, read The Hindu and this India Today investigation. This FIAPO report offers a detailed analysis of elephant ownership in India.