Leaders installed by Moscow in Luhansk, Donetsk, Kherson and Zaporizhzhia provinces announced plans to hold a referendum on joining Russia. They will be held around the end of September. Why this matters: the polls are being framed “as an ultimatum to the West to accept Russian territorial gains or face an all-out war with a nuclear-armed foe”—since any attempt to wrest back those regions can be framed as an attack on Russian soil. FYI: together, these make up 15% of Ukraine’s territory. (Reuters)

The political dharma of raids

An Indian Express investigative series revealed what many of us already suspect: Government agencies spend most of their time targeting rivals of the government in power. The data shows that over the past 18 years, the Central Bureau of Investigation has investigated 200 prominent netas—of whom 80% were in the opposition. The trend, however, has significantly accelerated under the BJP sarkar. The percentage has jumped from 60% in the UPA years to 95% in the eight years of NDA rule.

As for the Enforcement Directorate, 85% of the 147 politicians investigated in the past 18 years were from opposition parties. And of the total 147 netas, 121 were targeted since the NDA came to power in 2014. Of those, 95% belong to the opposition ranks. Indian Express has more details on the CBI and ED.

Spotify gets into the book biz

The company will offer a catalogue of 300,000 audiobooks—which can be purchased individually. This mounts a direct challenge to Amazon’s Audible—which has a virtual monopoly in this area. For now, Spotify does not have a subscription model unlike Audible—but may introduce it in the future, along with ad-supported tiers. The books are only available in the US for now—but will be rolled out across countries soon. (Wall Street Journal)

A Gujarati coming-of-age film titled ‘Chhello Show’ (Last Film Show)—which will be India's official entry in the Best International Feature Film category. The film is inspired by director Pan Nalin’s childhood in rural Gujarat—and follows a nine-year-old boy “ensnared by the magic and science of light and shadow that lies behind celluloid film projection.” Sounds a bit like ‘Cinema Paradiso’? It beat out the likes of SS Rajamouli’s ‘RRR’ and Vivek Agnihotri’s ‘The Kashmir Files’ to make the final cut. There was great angst on Twitter over the decision not to pick ‘RRR’—which may have been our best bet for an Oscar this year. (Scroll)

Broadband in India: Our ranking in the Speedtest Global Index has fallen by seven notches—from #71 to #78—just over the course of one month! This even though our broadband download speed has marginally increased—from 48.04 Mbps speed in July to 48.29 Mbps in August. That’s still a snail’s space compared to the top three: Singapore (219.01 Mbps), Chile (211.43 Mbps) and Thailand (188.75 Mbps). Here’s hoping Mukesh-bhai’s 5G will make everything better. (Hindustan Times)

Shorter work weeks: A trial program of a four-day work week in the UK has been a smashing success. Nearly 90% of the 70 companies—ranging from a fish and chip shop to IT and retail companies—said the experiment was working well. And 86% said they may stick to the shorter working week once trial ends. And it doesn’t seem to have hurt productivity—which remained the same in 46% of businesses surveyed, and slightly improved in 34%.

FYI: Right now, over 180 companies in a half-dozen countries are participating in a six-month pilot program. Point to note: the results may be a bit skewed since at least one in five companies drop out early from these trials. (Times UK, paywall, or Fortune)

Ants, ants, ants: Researchers have finally arrived at an estimate of the number of ants in the world. The staggering total: 20 quadrillion (that’s 16 zeros!) or 20,000 trillion. That’s more than the number of stars in the Milky Way. Or let’s put it like this: “If all the ants were plucked from the ground and put on a scale, they would outweigh all the wild birds and mammals put together. For every person, there are about 2.5 million ants.” The next big question: are their numbers increasing or decreasing? (Washington Post)

At a recent tournament, 19-year-old grandmaster Hans Moke Niemann defeated the reigning world champion Magnus Carlsen—breaking his 53-game winning streak. Carlsen then immediately withdrew from the tournament—without offering a reason. But many thought Carlsen walked away because he thought Niemann cheated—since he has previously admitted to doing so. That controversy escalated yesterday when Carlsen resigned in an online chess game against Niemann—after making just one move—and switched off his camera.

Chess experts are in shock: “This is unprecedented. I just, I can’t believe it… He [Carlsen] will play the tournament, but he is saying ‘I will not play the game against him’. That’s making a very big statement.” See just how shocked the commentators were when it happened below.  (The Guardian)

Adnan Syed is out of prison

The subject of the wildly popular debut season of the podcast ‘Serial’ was released from prison after nearly 23 years. The Pakistani American was convicted as a high school student for the 1999 murder of his ex-girlfriend Hae Min Lee. He served decades in jail until the podcast took up his case—and made Syed famous. The reason: “Prosecutors said they lacked ‘confidence in the integrity of the conviction’ and had identified two new potential suspects who were known to police since the 1999 murder.” He is not free yet. He is being held in home detention—and prosecutors have 30 days to seek a new trial. (BBC News)


Many things to see

One: Let’s start with the royal funeral—which, as expected, spawned many clips and pointless controversies. First up, Prince Harry—who is under fire for not singing ‘God Save the King’ during the funeral. Passive aggressive rebellion against Papa or just doesn’t know the words? Here’s a frame-by-frame analysis—because you really need this. (Sky News)

Next in the crosshairs: Emmanuel Macron who got a lot of unearned flak for wandering around in casual street wear, trying to mingle with the locals. Clips and images of the stroll went viral with claims that he and wife Brigitte deliberately “dressed down” for the actual funeral. Here he is trying to go “incognito” in London. We do love dem trainers. (Express UK) 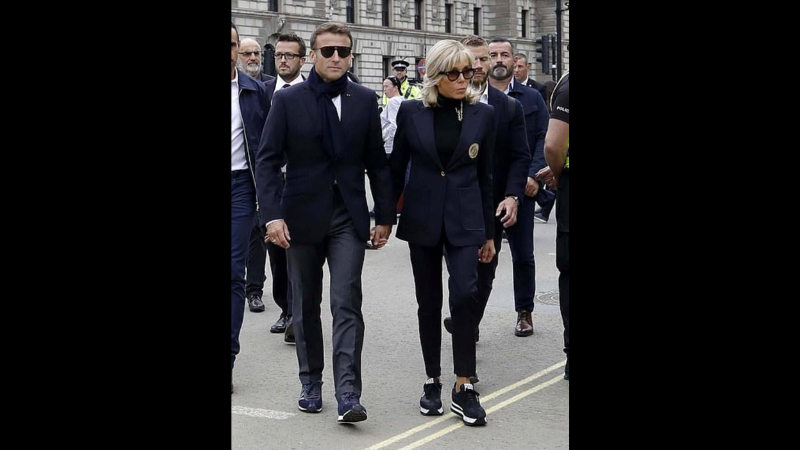 Two: Moving on to something more serious, an appalling video shows under-17 women kabaddi players being served food in a men’s bathroom in Uttar Pradesh. The local sports officer first claimed the food was kept in the “changing room” because of a "space crunch.” He has since been suspended—only because the video went viral, we assume. (NDTV)

Three: Speaking of gender discrimination, the death of Mahsa Amini has sparked widespread protests in Iran. She was beaten to death by the morality police for “incorrectly” wearing the hijab. You can see the police attacking veil-less women protesters with water cannons—to little effect. (New York Times)