US House Speaker Nancy Pelosi landed in Taiwan on an unofficial visit—guaranteed and likely intended to enrage China. Beijing considers Taiwan to be part of China—and any acknowledgement of its sovereignty is viewed as unacceptable. This is the first time that a US House speaker has visited Taiwan in 25 years. And Pelosi went ahead despite warnings from the Biden White House—which said it was “not a good idea right now.”

Beijing’s response: The government announced “targeted military operations to counteract the situation” near Taiwan—including joint air and sea drills as a show of strength. The Foreign Minister also declared the visit “extremely egregious” and warned the consequences will be “extremely serious.” CNN has more details. Washington Post carried Pelosi’s op-ed explaining her decision.

India scored two new golds—including a historic first in women’s Lawn Bowls—and in men’s table tennis—where they retained their top position. But in badminton, a faltering performance by Srikanth Kidambi left us settling for silver—we lost 1-3 to Malaysia in the finals. FYI: The Hindu has a delightful story on the women's Lawn Bowls team—which first started training in the sport in 2007 and doesn’t have a coach. And Olympics.com profiles these four amazing women. Firstpost has a great introduction to this fairly unknown sport.

According to TechCrunch, the cab-hailing company is selling its 7.8% stake—612.2 million shares—for around $373 million (other publications don’t have confirmation as yet). Uber took the stake when it sold its local Uber Eats business to Zomato in early 2021. (Mint)

The great exodus of Indian wealth

Reserve Bank data shows that Indians are taking their money offshore. They moved $1.69 billion into foreign bank deposits, equity and debt instruments and offshore properties in the last fiscal year. That’s almost a 40% jump from 2020-21. To give you a perspective: in FY 2014-15, we invested just $292 million abroad.

One key reason for this capital flight: lots of newly minted millionaires looking for “geographic diversification” in their investments. The other is the pandemic—especially when it comes to buying real estate. The biggest winners there have been Dubai and New Zealand. Of course, property is also a gateway to citizenship, especially in places like Lisbon and London. FYI: 8,000 Indian millionaires are expected to relocate this year, second to only the Chinese and Russians. (Al Jazeera)

Metaverse goes on the back burner

After all that hype over a brave new virtual world, tech companies are hitting the reverse gear on their metaverse projects—including the biggest hitters like Meta, Google and Apple. A new study shows that postings for jobs related to the ‘metaverse’ declined by a jaw-dropping 81% between April and June 2022. The reason: fears of a recession and declining revenues in one of the worst quarters posted by Big Tech. FYI: Meta recently reported its first-ever slump in quarterly revenues. Why this makes sense:

“As of now, the metaverse isn’t a revenue driver for any major company, and it’s unknown how readily consumers will take to metaverse platforms in the future. So, companies need to slow hiring, it makes sense that metaverse jobs would be likely to go before jobs that are critical to the products that drive revenue today.”

A new analysis by climate scientists warns that we have not done enough to study worst case scenarios—or the domino effects triggered by even modest levels of rising temperatures. Think wars, poverty, pandemics—and all the chaos and violence that would ensue. Take, for instance, the fact that extreme heat—i.e annual average temperature of more than 29°C—could affect 2 billion people by 2070 if carbon emissions continue unchecked. What does that actually mean:

“Such temperatures currently affect around 30 million people in the Sahara and Gulf Coast. By 2070, these temperatures and the social and political consequences will directly affect two nuclear powers, and seven maximum containment laboratories housing the most dangerous pathogens. There is serious potential for disastrous knock-on effects.”

The Guardian has more on the study.

The most expensive McMuffins ever

A passenger flying from Bali to Darwin was fined $1,874—after a very clever (and hungry?) airport security dog smelled two undeclared egg and beef sausage McMuffins and a ham croissant in his backpack. This was not a good thing since Australia has imposed strict import rules after a Foot and Mouth disease (FMD) outbreak in Indonesia. As an Australian Minister noted, the three McDonald’s breakfast items cost more than airfare to Bali. (USA TODAY)

Speaking of bad life choices: A Chinese influencer posted a clip of her roasting and eating a piece of a great white shark. Illegal possession of the protected species in China carries a sentence of five-to-10 years in prison. She is being investigated by the police. But if you really need to know, this was her verdict on the meal: “It may look vicious, but its meat is truly very tender.” (CBS News)

Speaking of bad Chinese choices: Over the weekend, a Chinese rocket—which helped launch the latest space station module—crashed back to Earth. Astronomers and space agencies were furious at Beijing for the careless, uncontrolled entry—since the debris poses a serious hazard if it lands in populated areas. We finally know what happened: 20-40% of the rocket survived reentry and landed in various villages across Malaysia and Indonesia. As one astrophysicist noted: “No casualties or property damage reported, but debris is near villages and a few hundred metres either way could have been a different story." (Space.com)

One: Brad Pitt channelled his inner Harry Styles at the German premiere of his film  ‘Bullet Train’—rocking a linen skirt. As expected, there were many who read way too much into his ‘gender fluid’ sartorial choices—especially given his goofy explanation for going femme: “I don’t know! We’re all going to die, so let’s mess it up.” Irrespective, we personally wouldn’t be caught dead in what looks like a Sarojini Nagar reject. 🤷🏻‍♀️ (Variety) 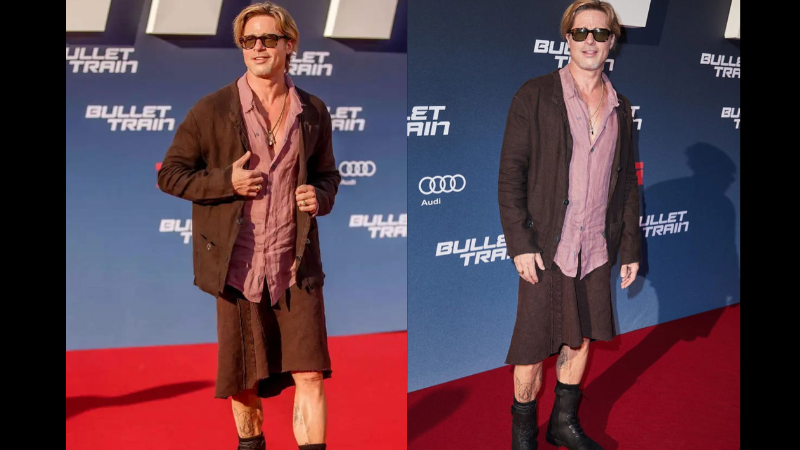 Two: Yesterday, we showed you the cute little portable fans that are keeping Japanese cats and dogs cool in the midst of a heatwave. Humans, however, are opting for AQUA water jelly—which is the fancier alternative to plain old cold water. The other upside: it comes in a variety of flavours—including ‘ramune’ that tastes like a mild citrus-y bubblegum. (TechEblog)

Three:  A “ferocious-looking” fossil fish—a tuna-like predator called Pachycormus—has been unearthed in the UK. It is likely 183 million years ago—and in remarkably good shape, as you can see below. (BBC News) 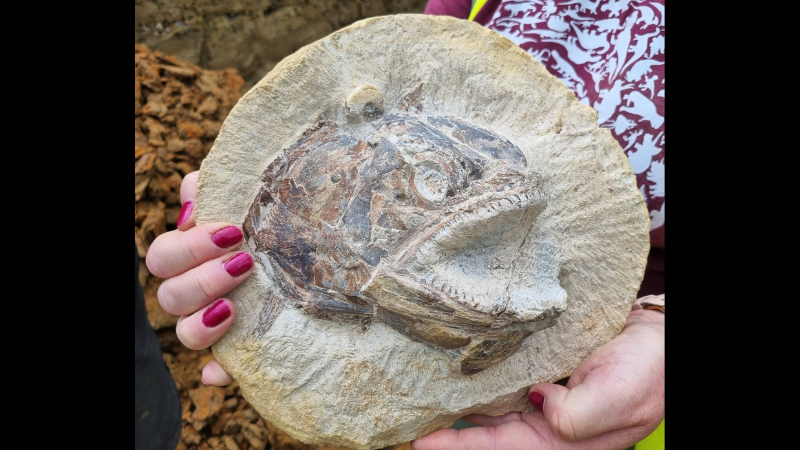