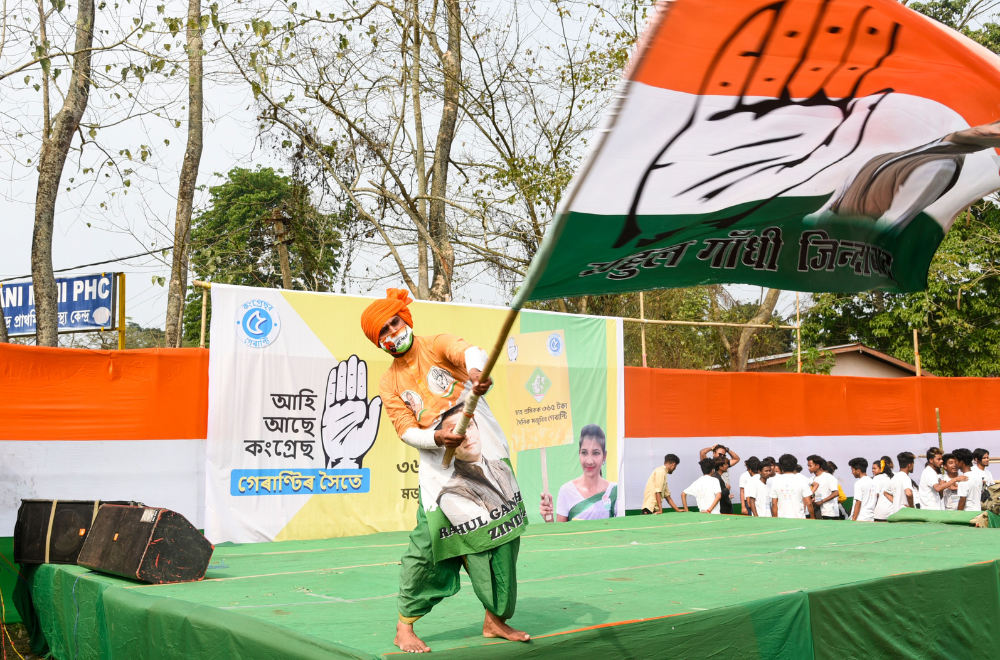 The Congress party election: Does it really matter?

Yesterday, Congress became one of the rare Indian political parties to hold open elections for the top post of president. And yet, no one appears to be impressed—perhaps because the outcome seems to be already sealed. We look at what is at stake in this election.

What election is this?

The presidential election: For the first time in over a decade, the Congress party has held open elections to pick its next president. The post has been empty ever since Rahul Gandhi theatrically quit the job in the wake of the crushing Lok Sabha election defeat in 2019. After years of futilely “begging” him to come back—and a rebellion of top leaders—the party finally conducted the poll on Monday. Across the nation, 9,500 delegates cast their vote—including Sonia Gandhi, who declared: “I have been waiting for a long time for this day.”

Point to note: Congress is one of the few parties to conduct polls to pick its leader—though it has happened infrequently. This was the sixth such election in its history. In 2000, Sonia Gandhi faced Jitendra Prasada and prevailed—while in 1997, Sharad Pawar and Rajesh Pilot lost to Gandhi loyalist Sitaram Kesri. But since 1978, the party has mostly been led by a “consensus” leader—i.e. a member of the Gandhi family. Reminder: the BJP has never elected its president.

The candidates: The final contest was between Thiruvananthapuram MP Shashi Tharoor and Rajya Sabha opposition leader Mallikarjun Kharge. While there is no Gandhi in the fray—Kharge is viewed as their candidate of choice. Kharge was a last-minute replacement for Rajasthan Chief Minister Ashoke Gehlot—who withdrew his nomination, preferring to rule in his state than cede it to his party rival Sachin Pilot. Die-hard loyalist Gehlot’s refusal to run was widely seen as proof of the waning power of the first family—which had pressed him to run, albeit behind the scenes.

More importantly: it revealed the uncomfortable truth that the job of leading India’s oldest national party isn’t exactly a prize—even to its veteran leaders:

“Gehlot’s apparent reluctance stemmed from the realisation that he would enjoy little functional autonomy as the Gandhis would be constantly looking over his shoulder. With the Congress organisation in poor shape, and the party’s revival posing a tough challenge, Gehlot realised the president’s post is, at best, a crown of thorns. He would rather guard his patch in Rajasthan.”

Point to note: Almost no one expects Tharoor to prevail over the Gandhi favourite Kharge. But every vote for him is also a vote against the status quo. So the final tally will speak volumes about the hold of the Gandhis over the delegates. As Tharoor politely put it in video message:

“Whatever the outcome might be, I believe every vote for me provides a signal not just to the party but the country that the Congress party is willing to change. When you (voters) are in the polling booth with your secret ballot, there is no other force there with you except your own conscience and your own courage. I hope you exercise not only your vote but also our legacy of courage.”

FYI: All that talk of “courage” and “conscience” in an internal election almost immediately ticked off party insiders.

As for the Gandhis: In true dynastic style, Rahul has been busy overshadowing the most critical election within the party with his very own ‘Bharat Jodo Yatra’. A campaign, Foreign Policy dismisses thus: “The procession, staged as an historic event, is mostly a means to repair the tattered reputation of Rahul.” And while the Gandhis insist they too want a free and open election, the fear of their displeasure is so great that many delegates refused to attend Tharoor’s campaign meetings: “There is an assumption that if we are seen with Tharoor sir, we might be sidelined [within the party].”

So why does this election matter?

The Lok Sabha elections are merely two years away. The election is the party’s last chance to get its act together—and reverse the catastrophic decline of its fortunes.

A regional party? The 2019 elections were a debacle for the Rahul Gandhi-led Congress. It won just 52 seats—which didn’t even meet the total required to lead the opposition in the Lok Sabha. And 60% of its seats came from just three states: Kerala, Punjab and Tamil Nadu. The party got more than 50% of the vote share only in Puducherry. And it clearly lost a significant chunk of the Hindu vote across the country—putting on a reasonable performance mostly in states with a significant minority population.

Losing to the BJP: Out of 188 Lok Sabha seats where the Congress was in a head-to-head contest with the BJP, it lost 174. It even lost ground in heartland states like Madhya Pradesh, Chhattisgarh and Rajasthan—where Congress had won the state polls just months before the national election. The worst of the lot, of course, was Uttar Pradesh—the home state of the Gandhis. The party managed only 6.3% of the votes—and Rahul lost his Amethi seat.

Stat to note: The party went from winning 82% of seats it contested in 1984 to losing 88% of them in 2019. Also this: the Congress has lost 39 of the 49 elections that it has fought since Narendra Modi first became prime minister in 2014.

From bad to worse: Things have not improved since 2019. The party currently only holds power in two states: Rajasthan and Chattisgarh. It is the junior partner in the ruling alliance in Jharkhand and Tamil Nadu. As for the largest state in the country, Congress only scored two out of 403 seats in the 2022 assembly elections in UP—with its vote share dropping even further to 2.3%.

The great defections: Thanks to that dismal electoral record, the party has haemorrhaged leaders—who have helped the BJP take key states like Madhya Pradesh, Goa and Karnataka. FYI: since 2014, 222 electoral candidates have left the Congress—also 177 legislators and members of parliament.

The spectre of AAP: Adding to its woes, the party has been consistently out-manoeuvred by the Aam Aadmi Party—which snatched Punjab away from the Congress–and is poised to replace it as the main opposition party in Gujarat.

The G-23 rebellion: The Gandhi family’s inability (or refusal) to stem the losses led 23 senior leaders to sign a letter to Sonia Gandhi. Shashi Tharoor was one of them. They called for a drastic overhaul of the organisational structure and sweeping reforms—most of which were seen as open and unprecedented criticism of the Gandhis. For example, the letter called for a “full time and effective leadership” which is both “visible” and “active” in the field. And Kapil Sibal famously declared at a press conference: “We are G-23, but definitely not Ji Huzoor 23.”

But, but, but: Nothing has really come of the G-23. Sonia Gandhi met sporadically with the ‘rebels’—but Rahul has continued to call the shots from the sidelines. And a number of the most prominent leaders—like Sibal and Ghulam Nabi Azad—have left in frustration. And most notably, a number of G-23 members lined up to sign Kharge’s nomination—rather than throw their support behind Tharoor, who apparently didn’t even ask for it.

Can a new president fix any of this?

Well, it depends on how you view Kharge. If you see him as a stooge of the Gandhis, then we will just get more of Rahul’s brand of politics.

A social movement? According to Arunoday Majumder in Scroll, this ‘new’ Congress is not really interested in winning elections—but rather styling itself as a social movement (See: Bharat Jodo Yatra). And it flirts with causes and issues rather than engage in the hard work of wooing voters:

“The youthful adventurism that marks New Social Movements allows participants to flirt with causes. This enables them to be non-committal and even be cause-hoppers. But when the Congress exhibits similar symptoms it means that ‘the grand old party,’ which developed as a social movement, is now being unmade.”

As a result, this new Congress is content to play on the sidelines:

“It seems that ‘the grand old party’ has resigned itself to be a distant runner-up in poll after poll. The Congress merely aims at victory in a handful of seats and a complementary vote share across the country so as to offer itself as the cement that can bind regional parties against the Bharatiya Janata Party behemoth. It attempts to make up for this acute lack of ambition by a moral grandstanding.”

But, but, but: Others argue that it would be a mistake to discount Kharge—since even the most die-hard supporter can often turn on their masters. After all, even Gehlot took everyone by surprise by defying the Gandhis. Dushyant writes in Times of India:

“Power, once ceded, is difficult to take back, no matter how much love there is between the people involved in the process. That is the nature of power. You don’t even have to look only at politics, you will be able to find examples in all trades, even in literature and movies. There is no such thing as a fool proof stand-in candidate, definitely not when your power is at its lowest.”

Kharge vs Tharoor: While he is a well-respected Dalit leader, Kharge is also 80 years old. It is difficult to imagine him as the face of change–which is critical for any party gearing up to challenge the BJP status quo. There has been plenty of criticism of Tharoor–where many liberals call him out for appeasing the Hindutva brigade, others like Gehlot dismiss him as elitist. However, many view him as far more capable of rescuing the party’s electoral fortunes. He has, after all, staved off the BJP in three successive Lok Sabha elections in Kerala—all of which he won by a convincing margin.

“Tharoor still may succeed in unifying a fragmented opposition that is weary of the Gandhis. Even if such a coalition cannot vanquish the BJP, it could deprive it of a full majority in Parliament and force it to form a coalition government. Modi is unaccustomed to sharing power, and any such arrangement could temper his worst instincts—if not finish him off completely. But since such a future would be predicated on a reformed Indian National Congress party—and since reform would threaten the Gandhis—a coordinated effort is underway to foil Tharoor’s bid.”

But, but, but: There are others who point out that Kharge’s great asset is that he can unify a party torn apart by power struggles and factionalism. And he can compensate for the lack of trust in Rahul. Tharoor—for better or worse—doesn’t enjoy that status.

The bottomline: All democracies have to give citizens a real choice—between at least two competing parties and ideologies. The Congress seems to be determined to deprive Indians of one.

For op-eds in support of Kharge, read NDTV and Deccan Herald. This Print column also calls out the urban elite for supporting Tharoor over a veteran Dalit leader. Foreign Policy, The Hindu and The Telegraph make the strongest arguments for Tharoor. NewsLaundry has more on how Tharoor has been shunned by party delegates. The Diplomat has a good piece on the history of the Congress—and how it lost India. Scroll offers a scathing analysis of Congress’ transformation into a flaky social movement. The Print is no less harsh on the Gandhis.