My go-to stressbuster these days is our playlist of the best and most chill Indian indie songs. Among them is my personal favourite: Peter Cat Recording Co.’s Floated By. Check it out here. Also, make sure you send us your recommendation for the ‘dancing in your underwear’ line-up below.

One: Morocco stunned Spain to reach the quarterfinals for the first time in its history. Like all good thrillers, the suspense lasted until the very end—when Spain missed all three of its spot kicks in the penalty shootout. It's a heartbreaking outcome for a promising young Spanish team—which cracked under pressure. The Moroccan hero was, of course, Paris Saint-Germain full-back Achraf Hakimi. FYI: the team held up the Palestinian flag in solidarity when celebrating their win. See the moment below. CNN has the match report.

Two: Guess no one missed Cristiano Ronaldo last night when Portugal decimated Switzerland 6-1. The football legend was dropped from the starting lineup by Fernando Santos—for throwing a hissy fit when he was substituted in the 65th minute of the game with South Korea (sound familiar ManU fans?). His replacement Gonçalo Ramos earned his place with an incredible hat trick—while Ronaldo failed to score after a late 73rd minute appearance.

Wall Street Journal (splainer gift link) summed up the outcome thus: “Cristiano Ronaldo has made the point, over and over, that he isn’t done with top-level soccer. But the reality emerging at this World Cup is that top-level soccer may be done with him.” BBC News also has more on the same lines. ESPN has the match report. (ESPN)

Three: Four Uruguayan players are facing disciplinary action after behaving badly in their match against Ghana on Friday. Convinced they should have been awarded a penalty kick, they confronted German referee Daniel Siebert after the final whistle—and appeared to have manhandled an assistant. The Uruguayan FA too is facing the same charges—plus one of discrimination that has not been explained. (BBC News)

The World Bank surprised everyone by upping its forecasted growth rate for the Indian economy to 6.9%—after downgrading it to 6.5% in October. The main reason: the bank is impressed that India has managed to maintain a respectable GDP growth rate despite strong global headwinds—and more so than any other emerging economy. As we reported before, the economy grew by 6.3% last quarter—helped mostly by strong personal spending. (The Hindu)

In other happy economic news: India is the first country in the world to receive remittances worth $100 billion per year. We can thank the 18 million NRIs who form the largest diaspora in the world—and dutifully send money back home. The remittances have jumped 12% since last year due to wage hikes and a strong labour US market. But the rise also reflects the weakening rupee-dollar exchange rate. (Quartz)

Meta’s big media war in the US

US Senators have introduced a new bill that allows news outlets to gang up and bargain with social media platforms for a larger share of ad revenue—in exchange for their news content. The bill grants a four-year exemption for such collective bargaining that is typically banned by antitrust laws. In response, Meta is threatening to pull all news content off its platforms—and says the plans “unfairly disregard any value we provide to news outlets through increased traffic and subscriptions.”  The company made a similar threat in Australia—but eventually reached an agreement that appears to have helped news businesses.

Interestingly, some of Meta’s fiercest critics—civil society groups—also oppose the law. They claim it could allow bad news actors—who spread misinformation—to sue tech platforms for reducing a story’s reach. And it could advantage large media companies over small, local and independent outlets. (CNN)

For over 100 days, the fishing community—led by the local Catholic church—has been protesting a mega-port project being built by the Adani Group in Vizhinjam (for reasons we explained here). Its leaders have decided to “temporarily” suspend the campaign—after the Kerala government apparently agreed to accede to most of their demands. What they did not get: a halt to construction while a committee assesses damage to the coastal shoreline. The Telegraph has more details.

Elon Musk recently hosted a show-and-tell demo for his neurotech company—which is working on a brain implant to help paralyzed people walk again and cure other neurological ailments. As with many biotech devices, it is being tested on animals. But Neuralink is facing a federal probe for violations of the Animal Welfare Act—which requires humane treatment of research animals.

Reuters' own investigation—based on internal documents and interviews—shows that Musk is putting way too much pressure on employees for results. This in turn results in botched experiments—increasing the numbers of animals being tested and killed.

Reuters identified four experiments involving 86 pigs and two monkeys that were marred in recent years by human errors. The mistakes weakened the experiments’ research value and required the tests to be repeated, leading to more animals being killed, three of the current and former staffers said. The three people attributed the mistakes to a lack of preparation by a testing staff working in a pressure-cooker environment.

Musk is in a hurry because rival companies have already received permission for human trials. The company has killed about 1,500 animals—including more than 280 sheep, pigs and monkeys—since 2018. We recommend reading the detailed Reuters report.

The US Food and Drug Administration (FDA) approved a treatment that uses donated stools to treat serious gut infections. In this case, Reboyta targets a bacterial infection called Clostridioides difficile which can take over the gut—releasing toxins that trigger diarrhoea, fever, organ failure and even death. This is common among older patients who have been extensively prescribed antibiotics.

Faecal therapy restores the gut’s microbial composition using stools from a donor—usually a person known to the patient. Reboyta is the first pharmaceutical treatment composed of stools from healthy donors—a liquid that is administered into a patient's rectum through a tube. A one-dose treatment reduced the rate of C. diff flare-ups by 29.4%. (New Scientist, login needed, LiveScience)

The first large-scale experiment of a four-day workweek has come to a surprising conclusion: every one of the 33 participating companies plans to stick with the shorter schedule. The reason: big gains in revenue and employee productivity—and important drops in absenteeism and turnover. The study is part of a global six-month pilot program spread across US, Canada, Ireland and Australia. (Mint)

And the TIME entertainer of the year is…

The K-pop band Blackpink. The all-women band—with Jennie, Jisoo, Lisa and Rosé—is the second Korean band after BTS to receive the honour. Why 2022 is their year: their second album ‘Born Pink’ released in September and sold over 2 million copies—a record by a Korean girl band. Never heard one of their hits? Check out ‘Pink Venom’ below: (TIME)

One: Prince Harry dressed up as Spiderman to send a Christmas message to cheer up military kids who have lost their parents—and likely miss them desperately around this time of the year. (Independent UK) ​​

Two: ‘Eyes of Iran’ is a new art installation set up at the FDR Four Freedoms Park in New York—to express solidarity with Iranian women. It features eyes of various dimensions—and pointedly faces the United Nations building:  “When we say that we must keep our eyes on Iran, we mean that what is happening deserves not only our attention but our vision.” (Smithsonian Magazine)

Three: An extremely rare moment of a wild lioness giving birth was captured on camera at South Africa’s MalaMala game reserve. Pregnant mothers generally go into hiding and don’t rejoin the pride until the little ones can walk. (HuffPost)

Four: George Clooney was fêted at the 45th Annual Kennedy Center Honors. And his bestie Julia Roberts showed up in a Moschino dress covered in framed photos of her BFF through the years. (People) 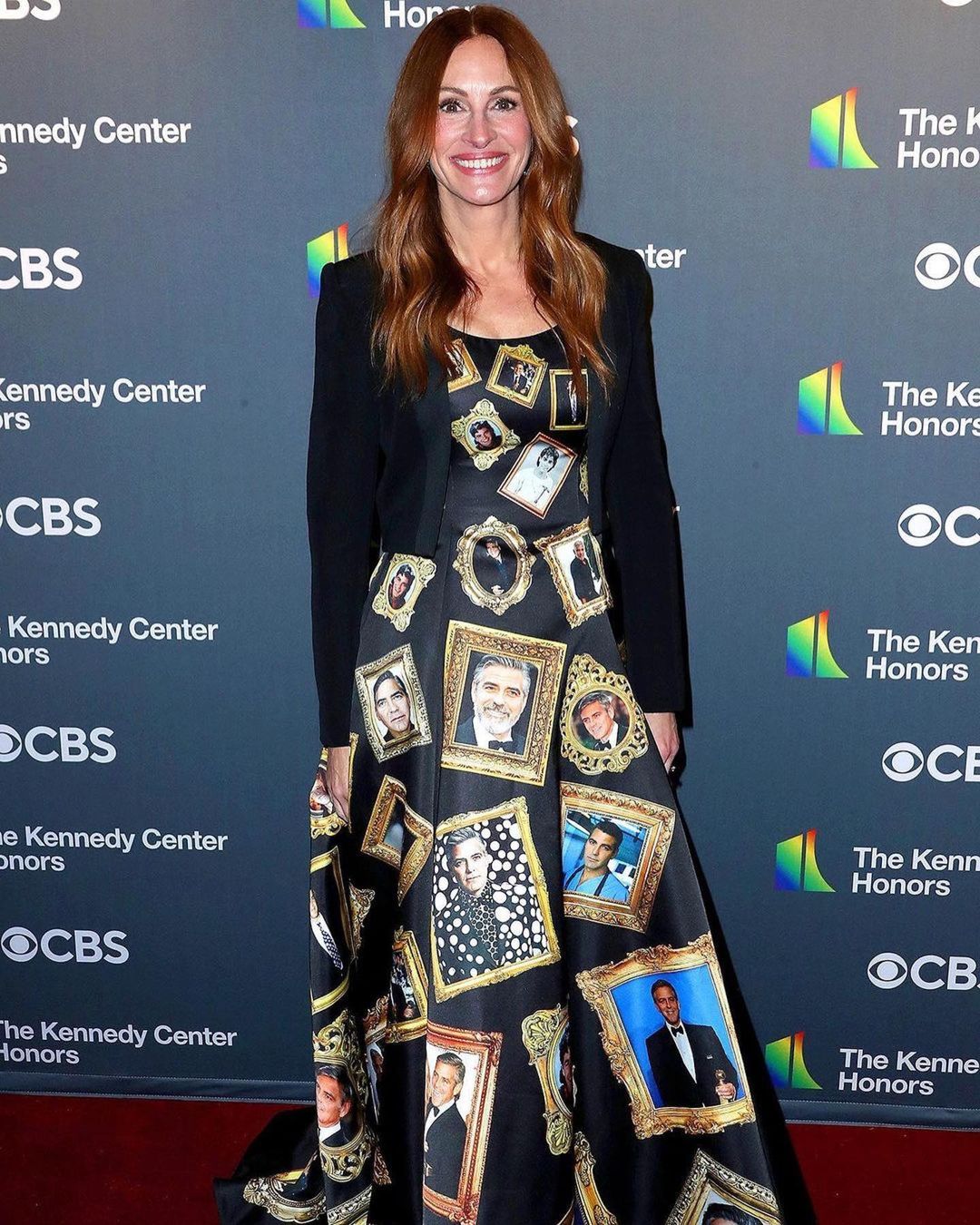