Right now, India is the fastest growing economy in the world—thanks to double-digit growth in the last quarter. But economists warn that the good times are unlikely to last for very long. The latest prediction as per a Reuters poll of experts: the growth rate will drop from a predicted 15.2% in the April-June quarter to 6.2% in Q2—and decline to 4.5% in October-December. One reason for the sharp slowdown:

"Even as India remains the fastest-growing major economy, domestic consumption will perhaps not be strong enough to drive growth further as unemployment remains high and real wages are at a record low level…By supporting growth through investment, the government has only fired on one engine while forgetting about the impetus which domestic consumption provides. This is why India's growth is still below its pre-pandemic trend.”

The other key point to note: The rupee has been falling steadily for months—and hit an all-time low of 80.12 per US dollar yesterday. But it recovered to 79.9625 after the Reserve Bank stepped in to sell dollars—and boost the rupee. Read our Big Story on the rupee to know the various factors behind its precipitous fall.

In other gloomy news: The latest report of the National Crime Records Bureau (NCRB) shows that one in four suicide victims during 2021 was a daily wage earner. Total deaths: 42,004 or 25.6% of a total of 1,64,033. While daily wage earners have always been the largest group of suicide victims—this is the first time that number has crossed the quarter mark. (Indian Express)

In happier news for Pakistan: The country has secured a $1.1 billion bailout from the International Monetary Fund—which comes as a huge relief in the midst of devastating floods—which have inflicted damage of at least $10 billion. Pakistan’s foreign exchange reserves have fallen so low that it only has enough to cover a month of exports. (Reuters)

Ambani’s big plans for the future

At the Annual General Meeting, Mukesh Ambani announced a series of ambitious plans—the most interesting of which is his 5G play. Reliance will invest Rs 2 trillion in its 5G service—which will operate on a ‘standalone’ network—which means the connections will be fast (See: our Big Story on 5G in India). The service will be launched around Diwali—and will cover the entire country by December 2023. Mukesh-bhai also announced his dynastic succession plans—carving his empire among his three kids. Akash gets Reliance Jio, Anant will lead renewable energy and Ishaa will be the queen of retail. Mint has more details.

A 19-year-old was set on fire by a young man who was stalking and harassing her. He threw petrol through her bedroom window at night—and lit the blaze. She suffered 95% burns and later died—after naming him in a dying declaration. Her death has sparked a political row since both suspects are Muslims. The state government quickly imposed Section 144 banning gatherings after angry protests. (Indian Express)

Two years ago, the company discontinued its talc-based baby powder in the US and Canada. This was in response to lawsuits filed by women who claim the powder—which contains asbestos—causes ovarian cancer. The total number of lawsuits in the US: 38,000. And yet, the company did not make any move to do the same in the rest of the world. J&J has now announced that it will stop global production in 2023. But, but, but: “In India there is no plan to withdraw this talc and that there will be no recall. The product is safe and will be available till manufacturing stops.” FYI: Indian drug regulators have not said a word. (The Hindu)

The last of his kind dies in the Amazon

An indigenous man who is the sole remaining member of his tribe has died in the forests of Brazil. The 60-year-old was known solely as ‘Índio do Buraco’ or ‘Indigenous man of the hole’—who fiercely resisted all contact with the outside world. One likely reason: activists “believe that sometime in the 1980s, illegal ranchers, after leaving initial offerings of sugar, gave the tribe rat poison that killed all bar the ‘man of the hole.”

Why this matters: The number of remaining tribes in the Brazilian Amazon is somewhere between 235 and 300. And they are in great risk of extinction—more so because of President Jair Bolsonaro:

“Bolsonaro has long made his contempt for Indigenous peoples clear, once saying Brazil had erred by not decimating native peoples like the US cavalry did. Before assuming the presidency, he vowed not to give Indigenous people one more square centimetre of land, and he has kept that promise.”

The Guardian has more details. You can see rare footage of him below.

They think they’ve found a candidate that meets all three criteria: beans! And here’s why:

“When beans climb, they really do appear to be searching for a good spot. They reach out in broad, scanning motions as they ‘decide’ where to settle, and when they do latch onto a new rail, they exhibit a spike in internal electrical signals.”

New Scientist has more details on this fascinating research—while Futurism has a paywall-free curation.

The singer announced that she will be releasing her 10th studio album—titled ‘Midnights’—on October 21. This will be the first album with new songs in two years. Her description of the tracks is very lyrical and entirely vague:

“This is a collection of music written in the middle of the night, a journey through terrors and sweet dreams…[t]he floors we pace and the demons we face. For all of us who have tossed and turned and decided to keep the lanterns lit and go searching – hoping that just maybe, when the clock strikes 12 … we’ll meet ourselves.”

In other celebrity goddess news: Nichelle Nichols—best known as the greatly beloved Lieutenant Nyota Uhura in the original Star Trek TV series—passed away recently. Fittingly, her ashes will be sent into deep space aboard a rocket—launched by a company that promises “cosmic immortality.” Nichols will be in good and familiar company. The rocket will also carry the remains of Star Trek creator Gene Roddenberry, his wife Majel Barrett and James Doohan aka Scotty. (The Verge)

One: Devastating floods have displaced millions in Pakistan thanks to a monster monsoon—which set in late June. Massive rescue operations are underway across the country. Citizens too are using novel ways to extricate those trapped in the rising waters––like this bed frame rigged to a trolley. (BBC News)

Two: Lil Nas X stole the show at the MTV Video Music Awards on Sunday with this over-the-top outfit that consists of a feathered ball gown skirt frame and an enormous headdress. FYI:  the rapper also took home the VMA for his song ‘Industry Baby’ featuring Jack Harlow. Behold the glorious ensemble below. (CNN) 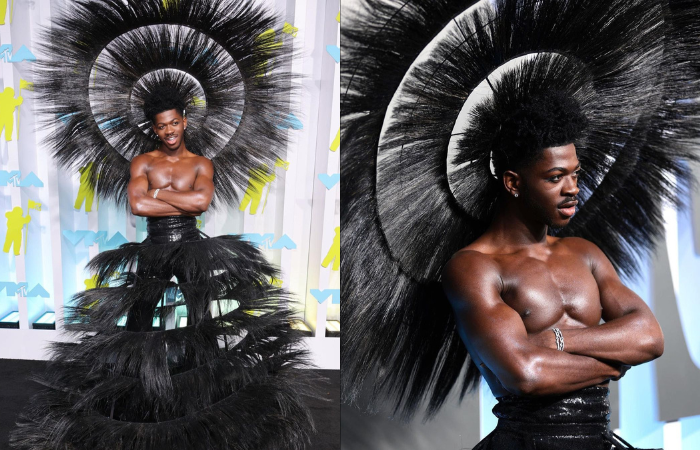 Three: A 20-year-old contestant in the Miss England pageant walked the ramp without a smidgen of makeup—a first in the competition’s history. Melisa Raouf said:

“It means a lot to me as I feel many girls of different ages wear makeup because they feel pressured to do so…[i]f one is happy in their own skin we should not be made to cover up our face with makeup. Our flaws make us who we are and that’s what makes every individual unique.”

Raouf plans to stay makeup-free during the pageant final in October, as well. (Independent UK) 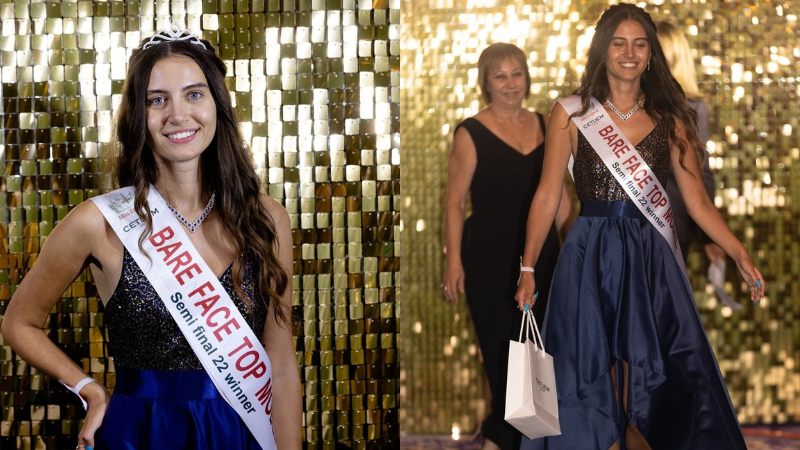