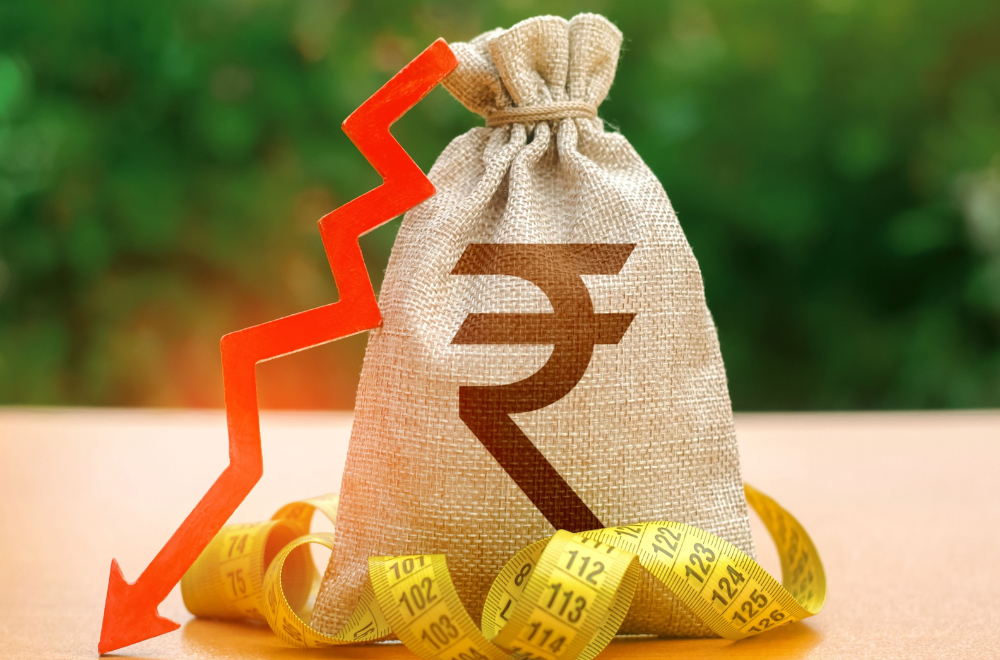 WTF is going on with the Indian rupee?

The Indian currency has been falling precipitously against the dollar over the past month. What’s going on and should we be worried? Here’s a quick and simple guide to the shrinking rupee.


Editor’s note: This Big Story was commissioned by subscriber Vikalp Gupta. If you aced your macro-econ classes, this Big Story is likely not for you:) But feel free to write in and offer us any gyaan we might have missed.

We always encourage our subscribers to write in and ask for Big Stories on subjects of their choice. So be sure to reach out to us at talktous@splainer.in.

As with any market, the value for a currency is set by supply and demand. And this, in turn, is linked closely to a country’s trade balance between exports and imports.

To import foreign goods and assets, we have to spend rupees to buy dollars—which increases demand for it. And with rising imports, there is a greater supply of our currency in the market. The rupee will be weaker than the dollar in this case. But if others want to buy our goods—or invest in India—then there will be a greater demand for rupees. It will then be stronger vis-a-vis other currencies, including the dollar.

To put it in the simplest terms: We could say that the rupee is falling because of the rising price of global oil—since we import 85.5% of all our oil needs. As The Hindu notes: India’s current account deficit—the gap between the value of imports and exports—is expected to hit a 10-year high of 3.3% of gross domestic product. The rupee has therefore fallen 4% since the invasion of Ukraine—which sent global energy prices skyrocketing.

But, but, but: it isn’t quite as straight-forward in the real world. A currency’s value is influenced by a variety of factors—including what’s going on with the mighty dollar/US economy.

The first thing to know is that the rupee is falling in relation to the dollar—not other currencies. In fact, it has gained value vis-a-vis the euro. The dollar value has been surging against all currencies—and is up 9% this year. The euro has now reached parity—as in one euro is now equal to one dollar—for the first time in 20 years! Many point out that the rupee has been far more resilient than other currencies–including the Japanese yen.

So why is the dollar so strong right now?

One: The dollar offers security for investors at a time when the global economy has been wracked by crisis after crisis. First, the pandemic upended supply lines—and then came the invasion of Ukraine, which has triggered a global economic Cold War. At times of great uncertainty, the dollar remains the safest bet:

“The dollar index is gaining not just because of an aggressive Fed but also weak risk sentiment. There is a risk off in the market stemming from the Ukraine-Russia crisis and tighter lockdowns in China. This is supporting demand for the safe haven, the US dollar,”

Two: The US economy—for all its problems with inflation etc.—is still doing better than the rest of the world. For example: Asian powerhouses—especially China—are still struggling. Repeated Covid-related lockdowns have stalled China’s recovery. And these countries have been slow to respond to the surging dollar—and rejig their monetary policies.

Three: The US Federal Reserve has been very aggressive in its efforts to curb runaway inflation—which is currently at 9.1%. The knock-on effect: investors looking for higher returns have pulled capital away from emerging markets such as India and back into the US. For instance, yields on US 10-year Treasury bonds have risen from around 0.5% in mid-2020 to over 3% now.

Point to note: While it’s comforting to note that the rupee is holding its own against other currencies, a sinking euro will also take the rupee down with it. The reason—we have significant trade links with the EU—which will impact our economic health.

The demand for the rupee, OTOH, has been falling. One big reason: the huge outflow of foreign investments from India. Foreign portfolio investors (FPIs) have pulled out Rs 420 billion (42,000 crore or $5.26 billion) just in June—taking the total amount of outflows to Rs 2.6 trillion (260,000 crore or $33 billion) since October 2021.

Key data to note: FPIs are the largest shareholders other than owners/promoters in Indian companies—and hold a significant stake in everything from private banks to tech companies and giant corporations like Reliance. And the US is the biggest investor—with Rs 17.5 trillion (17.57 lakh crore) as of May 2022—while Mauritius is a distant second at Rs 5.24 trillion (5.24 lakh crore). The Americans tend to take their money home when currencies fall in developing markets.

The fallout: The great sell-off has led to a sharp decline in the valuation of top-500 Indian companies—with some of them losing 15-20% in the last nine months.

The Reserve Bank of India is responsible for ensuring the stability of the rupee. It’s tried a bunch of different measures to steady—if not reverse—the decline.

One: The bank has dipped into India’s foreign reserves to sell dollars in the open markets—increasing the supply of dollars in the hope of arresting its surge. This hasn’t worked and our reserves shrank by Rs 1 trillion since February. The RBI cannot keep eating into our kitty—which has fallen below the $600 billion mark—and will fall further due to the rising dollar. Example: if we hold a chunk of our reserves in euros, their falling value will also shrink our kitty.

Two: The bank has also introduced a rupee settlement mechanism—where foreign companies can make payments in rupees, as opposed to dollars. This is aimed at reducing the demand for the dollar. The downside is that we don’t earn dollars for our exports. But some welcome this as a first blow against the dominance of the dollar—which is used to settle most global transactions:

“In the longer run, it is one more step towards, one, the use of the rupee as a global currency, and, two, diversification of the settlement of global payments away from the US dollar. It is a welcome move that speaks of India’s confidence that its overall foreign exchange earnings and reserves are large enough to afford the luxury of allowing some exports that do not earn foreign exchange.”

Three: The Hindu points out that the RBI has not done enough to deal with the biggest culprit: domestic inflation—which is also why the rupee has been losing value. Yes, it has stepped in to raise interest rates—and may do so again. But the long-term reason why the rupee keeps falling against the dollar is this:

“Higher inflation in India suggests that the RBI has been creating rupees at a faster rate than the US Federal Reserve has been creating dollars. So, while capital and trade flows gain a lot of attention in discussions on the rupee’s value, the difference in the rates at which the US Federal Reserve and the RBI regulate the supply of their currencies may play a much larger role in determining the value of the rupee in the long run.”

Point to note: Not everyone is upset about the falling rupee—which is a godsend for Indian exporters. It makes their goods and services more competitive in the global market. And some analysts point out that the export advantage is the key reason why China has allowed its currency to stay weak vis-a-vis the dollar:

“Instead of viewing forex and rupee’s exchange rate movements either from a warped jingoistic lens or through the cracked mirror of allegiance to different political parties, one should understand two things: One, broadly speaking, for a developing economy such as India, a gradually weakening rupee is economically beneficial and, thus, desirable. Two, the point of forex reserves is two-fold: to smoothen fluctuations in the exchange rate and to provide some strategic import cover. Merely accumulating forex reserves is not an end in itself; it is neither the ultimate measure of an economy’s success nor something that comes without a cost.”

OTOH: We have a ballooning trade deficit. A falling rupee will hike up the costs of imports. This, in turn, will push inflation rates even higher—which is terrible news for the economy.

The bottomline: The rupee is likely to hit Rs 81 to a dollar by the end of the year.

The Hindu has the best, most balanced explainer on the falling rupee. MoneyControl has more on the rising dollar, while Indian Express looks at the impact of the falling euro. On the RBI interventions, Mint praises the rupee settlement mechanism. Udit Misra in Indian Express and Abhishek Banerjee in India Today argue that the falling rupee is not a calamity. CNBCTV18 explains why it is a boon for exporters—while Firstpost lays out why the Indian economy is more resilient than others.