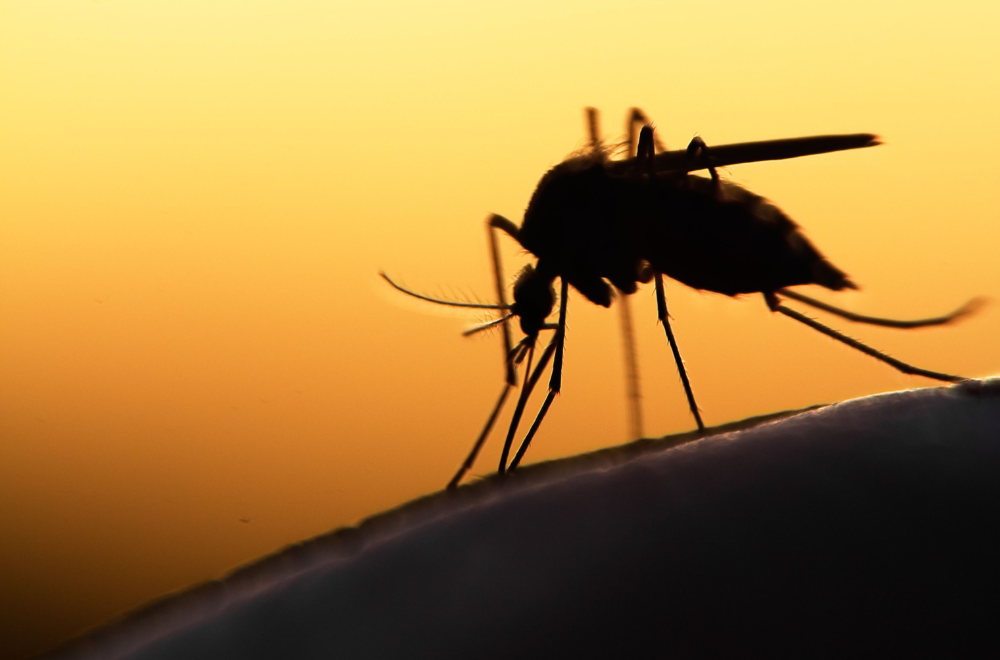 The great genetic war against mosquitoes

Since we don’t have a big headline to explain today, we decided to take a look at the powerful weapon being used to wipe out the most lethal mosquitoes: Genetic engineering. Can we eradicate the nastiest machhars on the planet? More importantly, should we?

A bit of history: Until the mid-nineteenth century, scientists were convinced that swamp gases caused malaria—which means 'bad air' in Italian. After Louis Pasteur discovered the existence of germs, someone finally spotted the parasite in human blood in 1880—and it was named Plasmodium falciparum in 1887. A British doctor stationed in India finally figured out that it’s the female mosquito that spreads the disease—since males don’t bite. It won Ronald Ross the Nobel Prize in 1902.

The dismal data: If you need to be convinced that mosquitoes are one of humanity’s great enemies, just look at the stats:

Nasty and smart: There are 3,500 species of mosquitoes around the world—and many of them are invasive. The worst among them being the Aedes albopictus—or the Asian Tiger mosquito which carries chikungunya and dengue. And they’re extremely smart and adaptive—countering everything we throw at them:

“Aedes aegypti (vector of yellow fever, zika, dengue among others) has adapted incredibly well to urban environments: it feeds only on humans and can lay eggs in a wide range of outdoors and indoors containers. Many mosquito species, including Anopheles, have evolved resistance against a variety of widely used insecticides and have changed their feeding habits (they now feed outside and earlier) so as to avoid bed nets and insecticide-sprayed homes.”

A recent study showed that a single exposure to a non-lethal dose of pesticide can teach a female mosquito to avoid a treated net!

The most cutting-edge weapon against the machhar involves genetically modifying mosquitoes—to wipe out entire populations. The technique is known as ‘gene drive’ and here’s how the cut/copy/paste process works:

Here’s a visualisation of how the gene drive works: 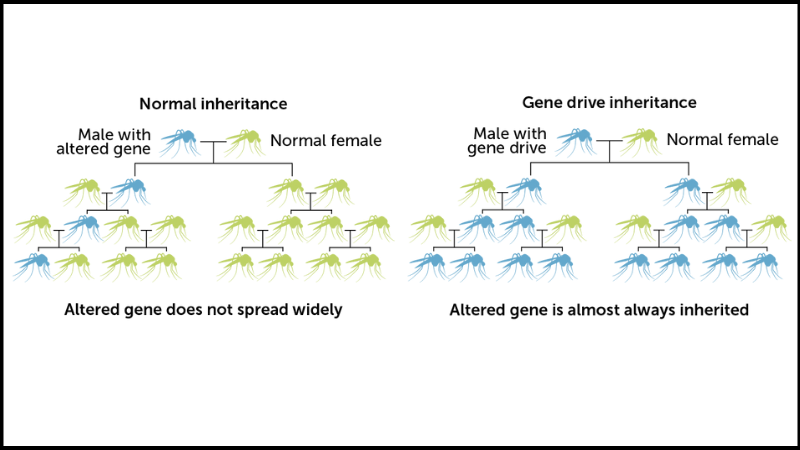 The technique, however, has only been tested in strictly controlled experiments.

Lab testing: In 2021, scientists placed the genetically engineered males in a special high-security lab in Italy—to ensure they would not escape. They created large cages that mimicked conditions in sub-Saharan Africa—including temperature, humidity and even the timing of sunrise and sunset. They then released the males into these cages containing hundreds of natural mosquitoes.

The result: The gene-drive mosquitoes wiped out the natural mosquito populations in less than a year.

Field testing: The UK company Oxitec has field-tested genetically modified Aedes aegypti mosquitoes—which carry Zika, dengue, chikungunya and yellow fever. It has carried out these tests in Brazil, Panama, the Cayman Islands and Malaysia—and most recently, in the Florida Keys.

Here’s how that worked:

“[R]esearchers placed boxes of Oxitec mosquito eggs on private properties in the Keys and surrounded them with traps, covering a radius of more than 400 metres. Some traps served as egg-laying sites, and others caught adult mosquitoes.”

When they hatched, the genetically modified male mosquitoes mated with wild females in about a one hectare-area around the traps. The females laid eggs in these carefully laid traps—such as flower pots, rubbish-bin lids and soft-drink cans. Researchers then took back the 20,000 embryos and hatched them under observation.

The result: All females that inherited the doublesex gene died before reaching adulthood. The lethal gene persisted in the wild population for two to three months—or about three generations—and then disappeared.

Also this: Oxitec has now been cleared to release 2.4 billion genetically-modified mosquitoes in California and Florida.

The great debate over gene drives

Oxitec’s big plans have also sparked a big debate over using genetic engineering to combat mosquitoes. The European Union has already refused to use the technology as it carries the risk of altering the ecosystem.

The downside: The main concern here is the law of unintended consequences. Groups that oppose genetic modification say:

“It is extremely worrying. To release something that has been specifically created in a laboratory in order to outfight nature, and spread without exception within wild populations, is extraordinarily arrogant.”

The worry isn’t misplaced. A 2021 study identified 46 possible harms from using gene drive technology. These include:

“Those potential downsides include reductions in pollinators and other species directly or indirectly related to the disappearance of the mosquitoes. It’s possible that people could develop allergic reactions to the bite of mosquitoes carrying a single copy of the gene drive, or to fish that eat the altered mosquito larvae. There could be a decline in water quality caused by large numbers of mosquito larvae dying. There’s even a set of scenarios in which malaria cases increase if, for instance, mosquito species that are better malaria spreaders take over in areas where a gene drive has thinned out less-troublesome mosquitoes.”

And this: Leaders of the Stop Gene Drives campaign argue that mosquitoes represent the first step down a slippery slope:

“‘We need the highest possible obstacle to using this high-risk … technology,’ Imken says. Allowing gene drives to be tried against malaria would essentially unleash them for use against a wide variety of organisms, with potentially devastating ecological consequences.”

The upside: As we mentioned before, mosquitoes are highly adaptive—and have become increasingly resistant to pesticides. And many experts argue, pesticides do far more harm than genetic engineering. And it could help save insects such as bees, butterflies and other pollinators:

“The stuff we have been doing for years has been intentionally designed to eradicate mosquitoes. It just didn’t do it. We’ve been spraying the hell out of them for years, and in the process killing a lot of other non-target organisms.”

Also this: The aim is to target only two or three lethal mosquito species—not make all mosquitoes extinct—which can have unintended effects on an ecosystem. The mosquito’s greatest value is the role it plays in the food chain. But birds, fish etc which eat them are not picky about the species. Only one species of spider is known to prefer Anopheles mosquitoes over other kinds.

And this: The human and economic opportunity cost of outright rejection is high: “If you have a high burden of malaria, that costs a lot. Children cannot go to school. People cannot go to work. That should also be considered if you talk about costs.”

The bottomline: There has been great resistance in local communities where these gene drive experiments have been conducted. People are naturally nervous about being exposed to genetically modified animals. Then again, GM machhars are likely to prove more popular than GM food. As one geneticist puts it: “Do you know anyone who has sympathies for the mosquito? It’s probably the most hated animal on the planet.”

Science News has the best, most comprehensive take on GM mosquitoes—including the key angle of community buy-in. Nature looks at the Florida Keys experiment, while NPR has more on the lab tests in Italy. Also in Nature: a very good piece on the mosquito as the ultimate serial killer. If the concept of gene drives is confusing, this video might help. We did a Big Story on a new malaria vaccine that is offering hope in Africa.