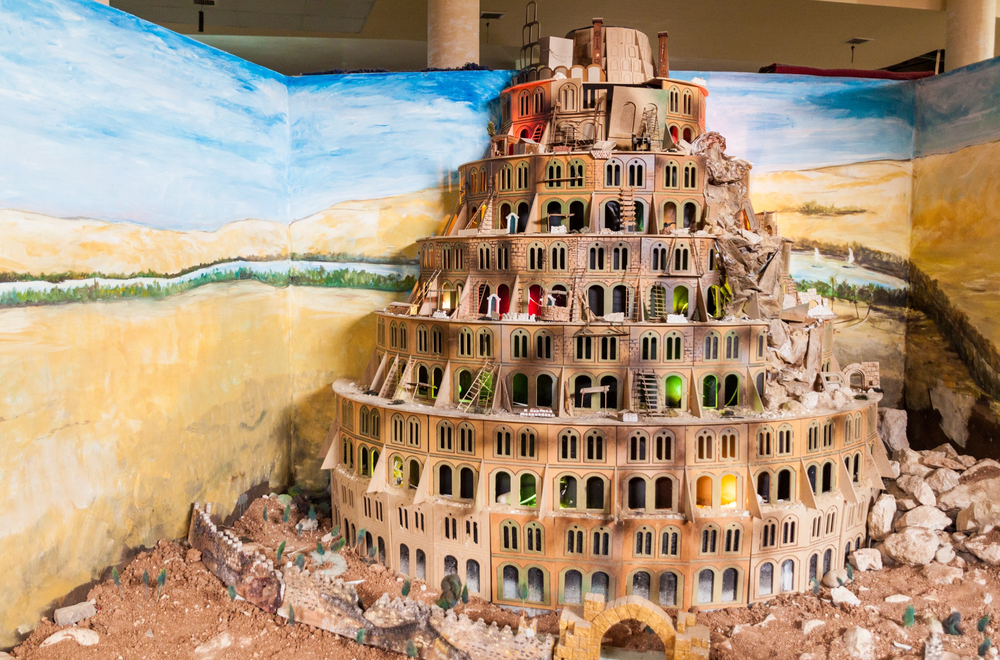 The language wars over Hindi: Part 1

In recent weeks, there has been great social media sparring over Hindi—and claims that it is our national language. What is the root of this stubborn hostility to Hindi? What did our founding fathers intend, and where are we now? In this first part, we look at the history of our linguistic legacy—in the formation of the states and the framing of the Constitution.

First, an introduction to the law

Two: Article 343 of the Constitution states that the “official language of the Union shall be Hindi in Devanagari script.” English was included but only as a stop-gap measure for a period of 15 years. But in 1963, the Official Languages Act okayed the use of English as an official language—without any time limit.

Point to note: Interestingly, the Constitution also says that all High and Supreme Court proceedings, parliamentary and assembly bills and laws must be in English.

Three: States can have their own official language—designating one or more languages spoken in the state. And a 1967 amendment to the Official Languages Act made it mandatory for the union government to communicate in English—or provide an English translation—with any state that does not have Hindi as its official language.

Four: The eighth schedule of the Constitution lists 22 recognised languages—including Nepali, Maithili and Kashmiri. As of now, 38 other languages have demanded recognition—many of which have been subsumed under the category ‘Hindi’. Example: Bhojpuri. But there is no clarification of what this list signifies, as such.

Five: The Constitution is fairly silent on the subject of languages—for reasons that will become clear. There are only two references to it:

Six: There are also strict rules on how the union government communicates with the states. The Official Language Rules framed in 1976 apply to all states—except Tamil Nadu. It divided the country into three regions.

The main takeaway: While Hindi is given primacy by the Constitution, there are multiple concessions that acknowledge the hard reality that much of the country does not speak the language—and does not want to. So how did we arrive at such a muddled state of affairs?

The birth of many ‘nations’

The battle over Hindi is intrinsically connected to the creation of language-based states in independent India—and part of the perennial tussle of power between the Centre and the states.

The pre-independence era: The colonial provinces were created by the British for ease of administration. The Congress party was the first to open the pandora’s box of language by promising to create linguistic provinces in its 1916 session. And with Mahatma Gandhi as its leader in 1921, the party reorganised its provincial arms along the lines of language. But after Partition—and the assassination of Gandhi—in 1948, Jawaharlal Nehru had serious second thoughts. Even prior to Gandhi’s death, Nehru was unequivocal in his view: “First things must come first and the first thing is the security and stability of India.”

The danger of division: The constituent assembly—tasked with drafting the Constitution—could not reach a consensus. And it passed the job on to the Linguistic Provinces Commission. Its report darkly warned against any plan to organise states along language—to promote stability over diversity that could divide:

“India’s tryst with destiny was a moment of hope, but there was still, beneath everything, that ‘centuries-old India of narrow loyalties, petty jealousies and ignorant prejudices’, so much so that they were ‘horrified to see how thin was the ice’ upon which the new nation was skating.”

But the constituent assembly wasn’t impressed—and set up another commission. This time it consisted of three leaders: Jawaharlal Nehru, Sardar Patel and Pattabhi Sitaramayya. The ‘JVP’ committee, however, reached the exact same conclusion. And Nehru stood firm until the fast of a single Gandhian destroyed all resistance.

The birth of Andhra Pradesh: In 1952, Potti Sriramulu started a fast until death to demand the creation of a separate state for Telugu-speaking people—to be carved out of the Tamil-dominated Madras Presidency. Nehru ignored Sriramulu even as his health deteriorated—and he finally died on the 58th day. His death immediately unleashed riots in Telugu-dominated districts. So fierce was the violence that the government capitulated within three days—and Andhra Pradesh was finally born in 1953.

The flood of mini-nations: In 1953, Nehru also appointed the States Reorganisation Commission to look into other existing demands for new states. Based on its recommendations, 14 states and six union territories were created in 1956—all along linguistic lines. And the Indian map looked something like this: 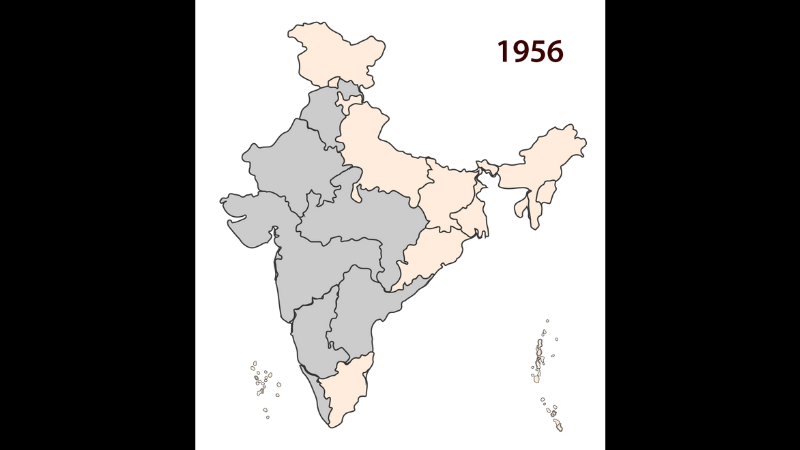 That trend toward fragmentation has continued ever since—culminating most recently in the creation of Chhattisgarh, Jharkhand and Uttaranchal in 2000 and Telangana in 2014—which was carved out of Andhra Pradesh even though they share the same language. We wonder what Sriramulu would make of that.

Point to note: During the 1950s, there was much hand-wringing over the “lingual fanaticism”—and fears that the south Indian states would secede from the north.

The demand for language sovereignty among the states was foreshadowed in the heated debate over the national language in the constituent assembly. President Rajendra Prasad even worried it would stall the implementation of the Constitution of India.

In September 1949, the assembly debated the various candidates for a national language, which included the following:

Hindustani: This option—a mix of spoken Hindi, Punjabi and Urdu—was supported by Gandhi, Nehru and many Congress leaders. It had the added benefit of uniting Hindus and Muslims. But the tenor of the discussion was best exemplified by RV Dhulekar who declared as early as in 1946:

And he made it clear that anyone who did not speak his language was, well, an anti-national:

Point to note: Only 45% of the population spoke Hindustani at the time.

Hindi: Dhulekar later switched his loyalties to Hindi—which became popular with Hindi-belt members who were also opposed to anything that smacked of Muslim culture. Here is Dhulekar in 1949 opposing Hindustani:

“For the last thirty-eight years, during the period I have been in the Congress, the history of this appeasement policy or this friendly policy or the Hindustani business has to be recollected a bit… I may say that except for a few thousands of Muslims, sons of this country, who are still with us except for them, the bulk of the Muslim population was not with us. They did not feel that this country was theirs. And therefore they wanted to separate.”

“In this spirit of intransigence, in a spirit of fanatical zealotry, there is a process of a purge which has become current and unless we define it, my own feeling is that in this present fanatical movement a new kind of Hindi which is unintelligible to the Hindi speaking Hindu in the street a new kind of Hindi which is unfamiliar to the people, a highly sanskritised Hindi will be imposed. There seems to be some kind of a vendetta against languages which have a non-Sanskrit or a non-Hindi origin.”

Point to note: The Sanskritised Hindi in Devanagari script was neither spoken nor read widely. It didn’t even appear much in the literary canons of the nation.

Sanskrit: As though shuddh Hindi was not obscure enough, Pandit Lakshmi Kant Maitra made an impassioned case for Sanskrit—as a symbol of India’s cultural glory:

“If today India has got an opportunity after thousand years to shape her own destiny, I ask in all seriousness if she is going to feel ashamed to recognise the Sanskrit language—the revered grandmother of languages of the world, still alive with full vigour, full vitality? Are we going to deny here her rightful place in Free India ?... I know it will be said that it is a dead language. Yes. Dead to whom? Dead to you, because you have become dead to all sense of grandeur, you have become dead to all which is great and noble in your own culture and civilisation.”

But, but, but: None of these options helped persuade the stubborn South Indians who declared “Hindi is no more national to us than English or any other language. We have got our own languages which are national languages”—sounding very much like Karnataka opposition leader Siddaramaiah today. Just accepting Hindi as an official language was considered sacrifice enough, as TA Ramalingam Chettiar pointedly noted:

“We have got languages which are better cultivated and which have greater literature than Hindi in our areas. If we are going to accept Hindi, it is not on account of the excellence of the language. It is merely on account of the existence of a large number of people speaking Hindi. Being practical, we do not claim that our languages which are better cultivated, which have got better literature, which are ancient, which have been there for millenniums, should be adopted.”

The great compromise: In the end, our founding fathers settled for the Munshi-Ayyangar formula—drafted by KM Munshi and Gopalaswami Ayyangar—which is what is enshrined in our Constitution today.

Point to note: As Firstpost notes, some of the biggest losers in this compromise over Hindi were languages in north India:

“The tragic outcome of this decision was the subsuming of the varied north Indian tongues under the bland label of ‘Hindi’. Within a few years of this decision, languages of considerable antiquity such as Bhojpuri, Awadhi, Braj and many others came to be regarded as Hindi dialects rather than as languages in their own right.”

The bottomline: Our Constitution has a split personality—reflecting both the deep-seated resistance to Hindi—and the eager desire to elevate it as the only ‘Indian’ language. In part two, we will look at how this uneasy compromise—rocked by the language riots of 1965—has held up in modern India.

The Hindu has a good overview of the status of Hindi. Firstpost, Mint and The Wire are best at capturing the constituent assembly debates. You can also get a flavour of the actual debate over here. The News Minute has TA Ramalingam Chettiar’s speech in full.