We hope you’re loving splainer’s new look and feel. And looking forward to the first edition of our weekend section—called Advisory. It will drop around 9:30 am on Saturday so please look out for it–and let us know what you think.  Here’s my email: lakshmi@splainer.in. And if you love the new splainer, please be sure to also shout it from the rooftops. You can also offer a month free to as many people you like using your referral link (see your daily email or account page).

Big reminder: Our app isn’t working as it needs a total reboot–which will take a bit over a month. Please don’t use it for now.

The splainer fam needs your help! It’s winter time and many of our subscribers are getting ready to battle the smog with air purifiers—be it smaller portable models or the larger versions for the home. Pretty please, help your fellow splainer subscribers by recommending your tried-and-tested faves. Fill out a handy form here. ICYMI: Here are our previous editions on the best earphones, athletic shoes, sunscreens, watches, perfect red lipstick and snacks.

One: Japan can’t stop winning! After a shock victory over Germany, it beat Spain 2-1—the thinnest of margins that included a controversial goal that was ruled in by VAR. The Athletic has more on the goal. The Guardian has the match report. FYI: it’s all about whether you judge this ball to be in or out: 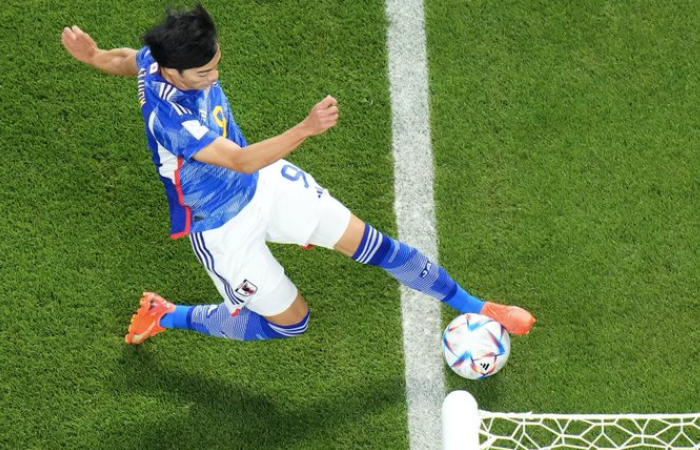 Two: The other big shocker: Germany is out of the World Cup—despite a 4-2 win over Costa Rica. The reason: Spain won their first game 7-0—giving them a massive goal difference over Germany. Spain and Japan are now through to the final 16—where they will face Morocco and Croatia, respectively. (CNN)

Three: In Group F, Belgium’s trophy dreams came to an end after a 0-0 tie with Croatia—which was enough for the latter to advance to the knockout stage. We all felt for Romelu Lukaku who broke down in tears. New York Times has more on the sad ending for the European powerhouse.

Four: Morocco, however, had every reason to celebrate—ending up at the top of Group F with a 2-1 victory over Canada. It is the first African team to achieve the feat since Nigeria in 1998. FYI: the Atlas Lions were unbeaten in their three games. Our fave bit of the Moroccan wins is this clip of Achraf Hakimi jumping into the stands to kiss his mom after the win against Belgium on November 27. BBC News has more on this amazing streak—and the team.

Beijing will allow some people who test positive to quarantine at home—rather than be forced into quarantine centres. And unnamed official sources claim that mass testing will also be eased in the coming days. This is an overdue acknowledgement of public anger at the zero Covid policy—which led to violent protests across the nation (explained in our Big Story). Some cities like Guangzhou and Shanghai hastily lifted their strict protocols soon after. The significant shift was signalled by a top pandemic official, who declared:

The country is facing a new situation and new tasks in epidemic prevention and control as the pathogenicity of the Omicron virus weakens, more people are vaccinated and experience in containing the virus is accumulated.

Passengers travelling out of Delhi, Varanasi and Bangalore will be able to use their face as a boarding pass—to get through the security check and enter the boarding gate. You will need to upload your Aadhar card and your photo on the government’s DigiYatra app—and then get your face scanned at the airport. Don’t worry, it’s entirely voluntary… for now. (The Hindu)

Air pollution: For the very first time, researchers have offered an estimate for stillbirths caused by toxic air. The staggering total from 137 countries: 830,000. A whopping 40% of all stillbirths in these countries was a result of exposure to fine particulate pollution. Point to note: the study did not look at data from Australia, New Zealand, the US, Canada, and Europe—since 98% of stillbirths occur in poorer parts of the world. The largest number were from India, Pakistan, Nigeria, China, and Bangladesh. (Gizmodo)

Indian girls with cancer: A Lancet study looked at the gender gap in childhood cancers in India. It found that far more boys are diagnosed with cancer compared to girls—because of gender bias. And it is far greater in the North:

Symptomatic girls might not be brought forward for evaluation and diagnosis, leading to fewer cancer diagnoses in girls. The nature of societal mind set affects this bias since we see that societies that are more patriarchal (like that in North of India) show a greater bias.

Since girls are less likely to be even diagnosed, this has a knock-on effect—it skews the gender ratio of kids seeking treatment for cancer. But the authors say that once a child is diagnosed, there is no sex disparity—except when high-costs and distance were involved:

We saw fewer girls seeking cancer care where the out-of-pocket expenditure (on families) would be higher such as when obtaining care from private hospitals or when patients stayed far from treatment centres.

The Telegraph and Mint have more details.

Carpal tunnel treatment: Indian researchers have shown that a non-surgical procedure can offer great relief for this painful condition—caused when median nerves and tendons in the forearm are pressed or squeezed at the wrist. The most often prescribed treatment is surgery. But nerve hydrodissection takes just 15 minutes. Doctors inject saline into a nerve to separate it from surrounding tissue — which provides pain relief to patients for up to six months. FYI: a recent review out of Singapore found little evidence of its effectiveness. So there isn’t any consensus within the medical community. (The Telegraph)

Fussy eaters: Here’s a tip for harassed parents: change the colour of your fussy kid’s plate. A new study shows that the colour of the crockery influences how the food tastes to picky eaters. Anything served in a red bowl or plate is perceived as saltier and less desirable. How this could be used:

This knowledge could be useful for those trying to expand their repertoire of foods. For example, if you wanted to encourage a picky eater to try more vegetables well known to be viewed as bitter, you could attempt to serve them on a plate or bowl that is known to increase sweetness.

Sounds a bit silly but fussy eating habits can lead to nutritional deficiencies—both in childhood and as adults. (New Atlas)

A new Israeli controversy over a movie

First, the Israeli jury member Nadav Lapid at the International Film Festival India (IFFI), criticised the inclusion of ‘The Kashmir Files’ in the competition category—calling it "propaganda.” This made many Indians really angry, and the Israeli ambassador had to apologise. Now, it’s Israel’s turn to be thin-skinned. A number of leaders attacked Netflix for streaming the Jordanian film ‘Farha’—which is also the country’s Oscar entry for 2023. The movie is about a 14-year-old Palestinian girl whose village is attacked by Israeli forces during the 1948 war—which also led to the creation of Israel. The film features scenes of massacres—including that of a baby. And the movie claims to be inspired by true events.

The finance minister declared: “It’s crazy that Netflix decided to stream a movie whose whole purpose is to create a false pretence and incite against Israeli soldiers.” A number of Israelis have also announced on social media that they’re cancelling their Netflix subscription. The company has not issued any response as yet. For more context: read our Big Stories on the roots of the Israel-Palestine crisis as well as the tragedy of Kashmiri Pandits.  See the trailer below. (Agence France-Presse via Barron’s)

In far less entertaining news: Kanye West gave a vile interview alongside a white nationalist where he said that while “I like Hitler”—he all-out “loves” Nazis because “they did good things too.” (Agence France-Presse via NDTV)

What’s the most expensive city of them all?

The answer: New York and Singapore—which are both #1 as per the annual survey of 172 cities by the Economist Intelligence Unit. That’s quite a climb for NYC which was at #6 last year. The others in the top five include Tel Aviv at #3, followed by Hong Kong and Los Angeles who tied for #4. San Francisco came in at #8—up from #24 in 2021. Of course, the cheapest cities are also either war-torn or have ravaged economies: Damascus, Tehran and Tripoli. As for Indian cities, Bengaluru, Chennai and Ahmedabad ranked at number 161, 164, 165 respectively. (Mint)

One: A South Korean woman who was livestreaming on Twitch was harassed by two men on the streets of Mumbai. The police have arrested both of them—but who will penalise everyone who is victim-blaming her for being “too friendly.” (Mashable)

Two: As part of a University of Rhode Island project, schoolkids launched a mini-boat named ‘Inspiration’ into the sea—to learn more about ocean currents. The little but mighty craft made it all the way across the Atlantic Ocean—and landed on the shores of Dorset, England—where it is being studied at great length by kids at the local primary school:) It’s quite impressive when you realise how teeny it is in the launch video below. (BBC News)

Three: The teaser for the tell-all Netflix documentary on Harry & Meghan just dropped. It is being billed as a “never-before-seen look at one of the most discussed couples in history.”  Yes, season 3 of ‘Emily in Paris’ is also upon us. It will drop on December 21. Prepare yourself for a Christmas break of binge hate-watching.

Four: Last but not least, watch NDTV anchor Ravish Kumar’s eloquent, thoughtful and measured farewell speech. Unfortunately, it may be difficult for non-Hindi speakers to follow—though it certainly deserves to be translated. Watch a snippet below and catch the complete speech here.