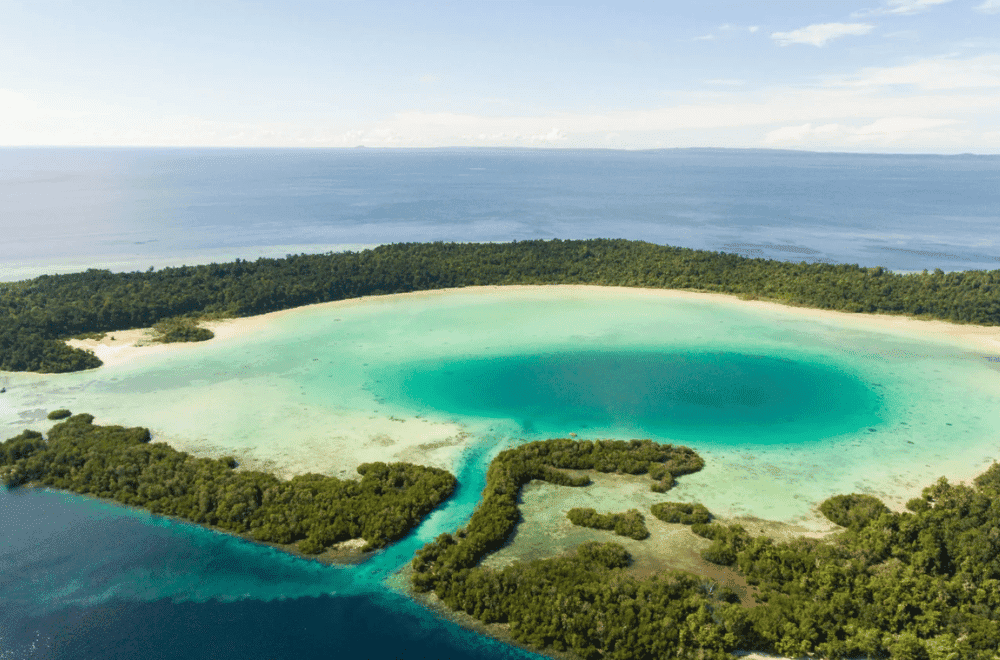 For sale: An entire Indonesian archipelago

The Indonesian government is auctioning an entire archipelago—with 100 islands—in a protected zone. Slated to become an extremely high-end, eco-sensitive resort, it is also being positioned as a pragmatic way to protect an endangered marine habitat. All of which raises the big question: can/should we save the planet’s most valuable ecosystems by turning them into playgrounds for the super-rich?

The uninhabited archipelago is spread across 780,000 acres in a Marine Protected Area—that includes 25,000 acres of rainforests, mangroves, lagoons, lakes, and beaches. Sotheby’s—which is conducting the auction—describes it so:

This island chain is one of the most intact coral atoll ecosystems left on earth and an animal kingdom of epic proportions, home to hundreds of rare and endangered species including blue whales, whale sharks, 600 documented species of marine mammals, fish, birds, insects and lizards, and species yet to be discovered.

The rainforests have colonies of parrots, kingfishers and falcons—as well as rare plants which have never before been officially documented.

The location: The reserve is located within the Coral Triangle—named for its staggering number of corals—there are 600 different species of reef-building corals. 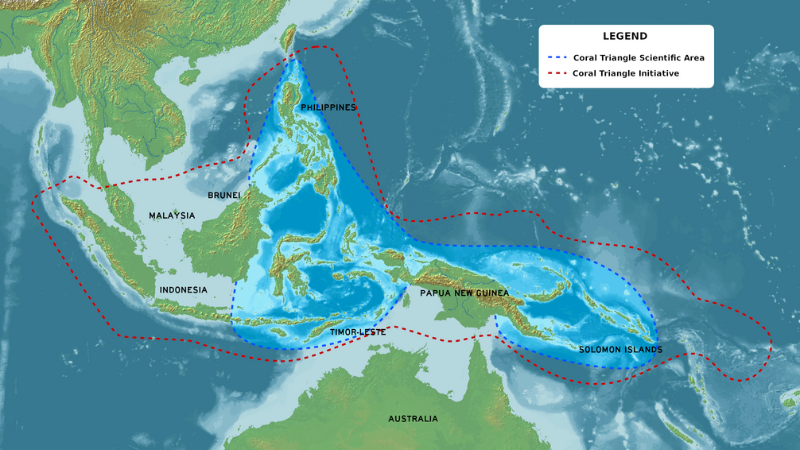 Indonesia’s 57,000 km coastline has at least 2.6 million hectares of coral reefs—which represents 25% of the total reefs in the region and which contains 75% of the world’s coral species.

The threats: The region is the hub for the global tuna fishing industry—and overfishing is one of the greatest perils to its biodiversity. Also dangerous: the widespread and illegal use of cyanide and dynamite fishing—which blow up or poison fragile coral habitats. Research shows that human activities threaten over 85% of Indonesia's coral reefs—principal threats being overfishing (64%) and destructive fishing (53%). Hunting also poses an extinction threat to a variety of endangered species including sea turtles, dugongs, seahorses and sharks.

Point to note: As part of its climate pledges, the Indonesian government has promised to secure 10% of the country’s territorial waters to protect biodiversity and promote sustainable use by the end of this decade.

The key question: Does selling this archipelago fulfil or betray that promise?

The terms: It is illegal to sell islands to foreign individuals or entities in Indonesia. The government has therefore done an end run around the law. It is selling “development rights”—where buyers bid for shares in PT Leadership Islands Indonesia (LII)—an Indonesian company with licensed rights to develop the reserve. The auction does not list a starting price but bidders have to deposit $10,000. Sotheby’s Concierge Auctions will conduct the sale in New York from December 8 to December 14.

Point to note: The reserve is considered a national state asset—and is technically owned by the citizens of Indonesia.

The plan: LII plans to sell development rights to build sustainable resorts and at least 50 private eco-residences. The total number of islands that can be potentially developed is limited to 25. According to a Sotheby’s representative:

The Widi Reserve forms a key part of the government’s wider strategy to encourage marine-led sustainable tourism in the area. As such, the current plans include at least 50 eco-resort keys, however there is huge scope and flexibility for other projects, including individual luxury hotels, private residential homes, or island estates.

And since it will cater to the jet-setting crowd, there will also be an airstrip with a 1,000-metre runway so they can hop on that 2.5 hour flight to Bali. The lead architect: Bill Bensley, best known for designing luxury resorts across Southeast Asia.

The environmental pitch: PR reps for the auction sell the project as a stellar example of eco-sensitive development. LII claims that its plans will touch “less than 1% of the rainforest” and “0.005% of the entire reserve”—and will include no-go areas for tourists along with spaces that cap the number of guests. All construction must be as close to 100% natural and sustainable. LII will also invest in a Widi Reserve Conservation Center to fund cutting-edge research programs that tag, track, and monitor critically endangered species.

Private security for wildlife: The company will take a proactive approach to fighting poaching and deforestation. It will invest $1.5 million in its first year for security patrols—supported by the Indonesian navy and coast guard.

The ‘green’ argument: is best summed as follows:

Like similar ecosystems, ‘the reserve has long been under pressure from shark finning, deforestation and the poaching of endangered species; left untouched the pressure on the reserve will only continue, and likely increase,” [a Sotheby’s executive] said, adding that the business sector had “a vital role to play.”

OTOH: The PR material also contains priceless gems like this: “Every billionaire can own a private island, but only one can own this exclusive opportunity spread across 100-plus islands.” So, yes, a pristine and protected marine preserve—but only for those who can afford it.

The causes for concern

For starters, environmental activists simply don’t trust the government—which has put the environment on the back-burner in its frantic efforts to attract investment.

The Widi Reserve: As for this specific sale, NGO leaders say it will have a significant impact on local communities. Yes, the islands are uninhabited but they are critical to fishermen in nearby islands:

Fishing spots for fishermen that have been used for generations will be limited. The social impact of this plan will offset the environmental benefits. Currently, the government is aggressively attracting foreign investment to obtain state revenue. No rules should be changed to pass this plan.

The fishermen will presumably not be welcomed by LII’s security patrols. And there are worries that all the promises to remain sustainable will fly out the window once the tourists arrive at the resorts.

The Widodo problem: In recent years, President Joko Widodo has been increasingly at odds with environmental groups—who do not share his soaring vision for the Indonesian economy. He is an impatient man in a hurry to do everything he can to attract foreign investors.

The ‘Omnibus Law’: In 2020—taking advantage of the economic worries sparked by the pandemic—Widodo passed a sweeping “jobs creation” legislation known as the Omnibus Law. It inserted 174 new articles into 79 existing laws. Apart from serious resistance from labour groups, it also significantly weakened environmental regulation. Details aside, it opened the door to wide scale deforestation—with one think-tank estimating that it would ensure the complete destruction of green forest cover in most parts of Indonesia. The unprecedented Widi Reserve sale is therefore seen as just another example of Widodo ‘selling’ the country’s most precious natural assets to business interests.

The bottomline: The Widi Reserve may indeed preserve the endangered reefs and its sea-dwelling inhabitants—for the enjoyment of the wealthy humans who can afford to marvel at its treasures. But even that won’t last forever. Thanks to climate change—and rising sea levels—Indonesia’s islands are disappearing. According to a 2021 study, 115 of Indonesia’s small islands are on the verge of sinking. It would be more than a little ironic if the Widi Reserve islands meet the same fate.

The Guardian offers a good overview, while Forbes and South China Morning Post have more details of the project. Carnegie Endowment analyses Widodo and his grand economic plans. The Diplomat is best on the environmental effects of the Omnibus Bill. Mongabay has an interesting read on the genuine dilemmas faced by indigenous island communities—who need development to raise their living standards but don’t want to sacrifice their environment. Global Voices has a lovely photo gallery of the many species that can be found in the Coral Triangle.