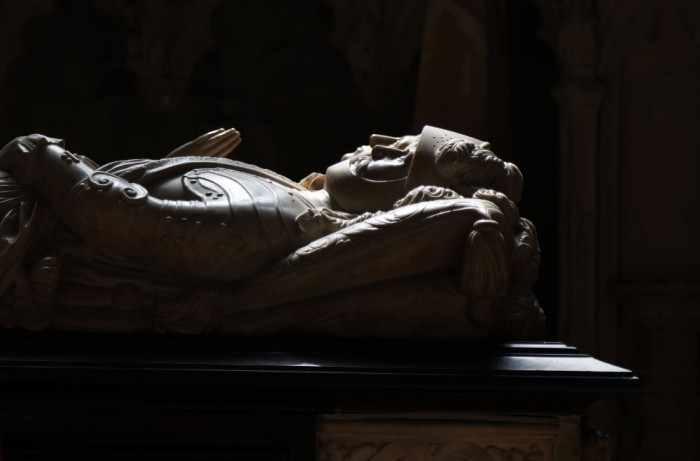 RIP, Your Highness: A historical guide to royal funerals

Queen Elizabeth II was finally buried in an elaborate ceremony yesterday. And other than the A-list guest list and eye-watering price tag, it was a decidedly tame affair. We decided to go back in time to look at other far more entertaining royal funerals—which offered full paisa vasool. (Sorry, we’re not in mourning)


Editor’s note: For a more serious take on the Queen, read our Big Story on her life and reign:)

Queen Elizabeth II died at the age of 96—ending an astonishing 70-year reign on September 8. The 2,000-strong congregation at the funeral included 500 world leaders from more than 175 countries—including President Droupadi Murmu. But the world leader who offered an unexpected moment of amusement: UK PM Liz Truss. Watch Australian TV commentators hilariously struggle to identify her:

Burial costs: While the cost of staging this grand spectacle has not been revealed, the final price tag is expected to run up to £10 million. Everyone agrees it will be the single most expensive event in British history. Making it more expensive: the economic costs of shutting an entire nation down—which is estimated at another $2.6 billion (2.27 in pounds).

A quick timeline: If you really need it, BBC News has the complete, blow-by-blow guide to the funeral. But here’s how it went down:

The venue: There are 30 notable royals buried at Westminster Abbey—including 13 kings, four queens and 11 queens consorts. It was built by King Edgar in the tenth century—but achieved A-list status as a royal mausoleum thanks to King Edward the Confessor. He rebuilt the abbey in grand Romanesque style—and it was completed a week before he died in 1066.

Oops, no space! Later monarchs started building their tombs around Edward’s shrine. But as the spaces filled up, Henry VII built another chapel—Lady Chapel—to accommodate his grand mausoleum. George II was the last monarch to be buried in the Abbey in 1760. Everyone else has been shunted to various locations at Windsor Castle.

A very public affair: Over time, the monarchy has allowed the aam janta more “access” to the royal body—not accidentally turning the funeral into a public spectacle:

Richard the Divided: In 1199, the body of King Richard I aka The Lionheart was chopped up and buried in different locations in France. His entrails went to Châlus—a commune near central France—and his heart ended up in the cathedral of Notre Dame—while the rest of the body was entombed in Fontevraud Abbey. While his embalmed heart has turned into powder, his tomb is still going strong: 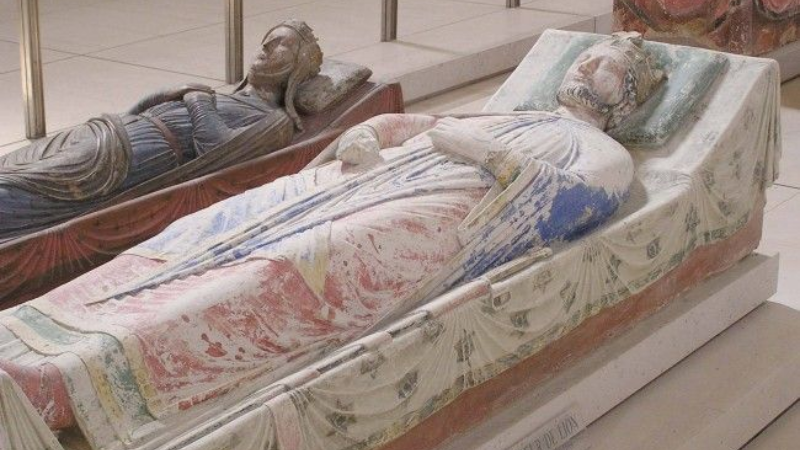 Exploding Elizabeth: No one knows the exact cause of her death in 1603 but one suspected reason is the one-inch mask of makeup Elizabeth I wore until the very end. It likely contained toxic amounts of lead causing blood poisoning. All of which led to a rather unfortunate event: “Her maid of honour, Lady Elizabeth Southwell, later wrote how six women watched over the coffin at night. She described hearing a loud ‘crack’ as the Queen’s ‘body and head’ exploded due to a build of gases.”

But the Palace, as usual, saved the day by ensconcing her body in a lead coffin (irony alert!) “so lifelike it reportedly made mourners gasp.” Fun fact: Elizabeth I stacked her body right on top of her sister’s Mary I at the Abbey. You can see her looking lovely as she occupies pole position below: 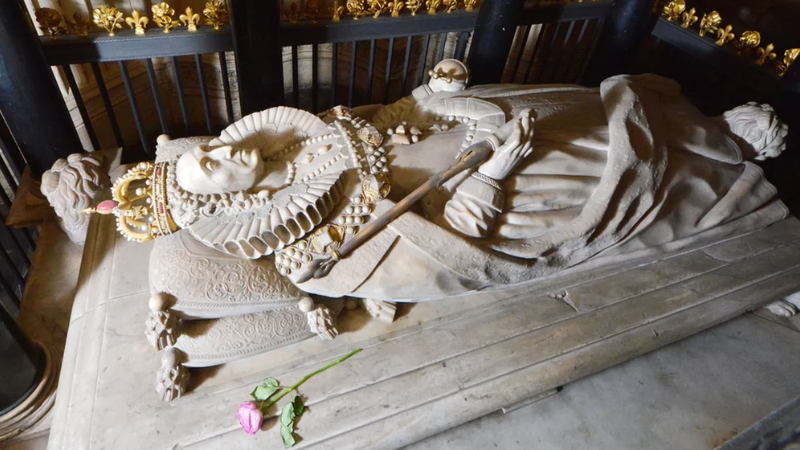 The merry death of George: The funeral of the “unpopular and gluttonous” King George IV was held at Windsor Castle in 1830. And it was a rather jolly affair:

“The crowds waiting for the procession in the Lower Ward of the castle grew impatient and were ‘joyous and merry’ rather than ‘mournful and sad’. The funeral was itself chaotic. The new King, William IV, delighted to have the top job, chatted loudly throughout the service, as did most of the congregation.”

Victoria the diva: Queen Victoria was the funeral-equivalent of the ultimate bridezilla—who left strict instructions for her last rites. She insisted on an all-white funeral—and was buried in a white dress and wedding veil—after wearing black for 40 years in mourning for her husband Albert. She was also buried with his mementoes including Albert’s dressing gown and a cast of his hand—and her alleged lover John Brown’s photo and lock of his hair, if rumours are to be believed. 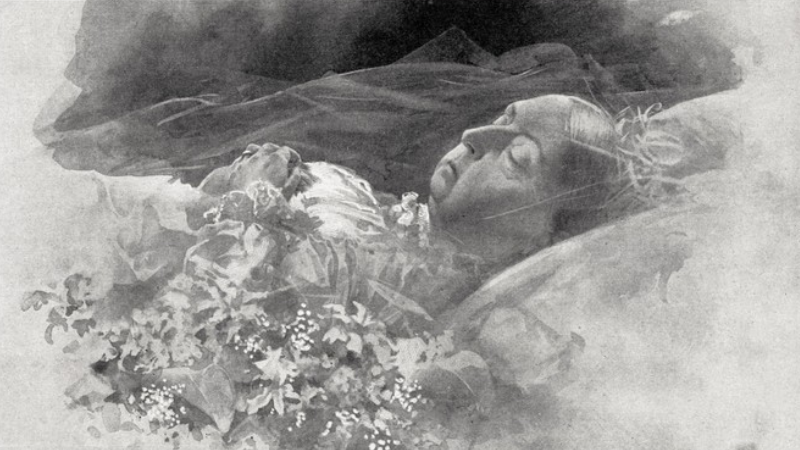 One slight hitch: Sadly, nothing goes quite to even Victoria’s plan. A horse bolted just as her half-ton coffin was lifted into place on the gun carriage. As a result, a team of Royal Navy sailors had to carry the coffin for the rest of the procession. That jugaad has since become a tradition that is maintained to this day.

Edward the animal lover: Everyone talks about the Queen’s love for her corgis. But Edward VII outdid her in his affection for his fox terrier Caesar—nicknamed Stinky by royal courtiers for reasons one can only imagine. At Edward’s funeral, Caesar was awarded VVIP status and led the funeral procession—ahead of “the new King, George V, and foreign heads of state, an act which enraged Kaiser Wilhelm II of Germany.” Excellent! As you can see below, all that fame didn’t go to Stinky’s head: 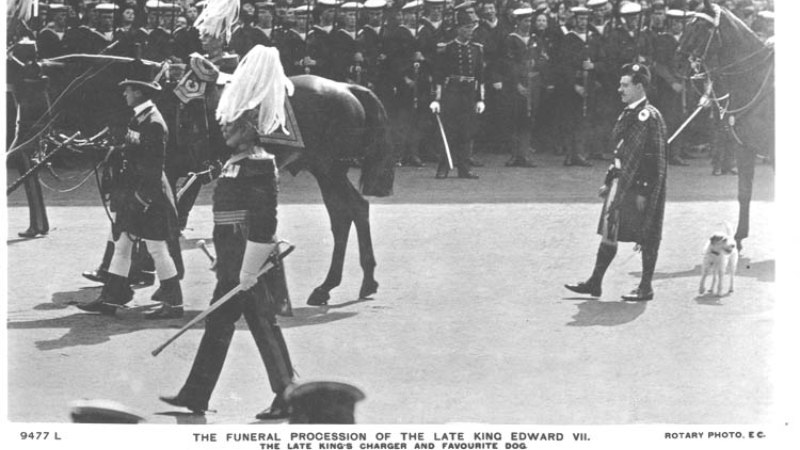 As for those corgis: They were consigned to the sidelines at Windsor Castle—from where they watched the Queen’s body pass by—along with her favourite pony Emma.

The spider that scrambled its way into the wreath atop Elizabeth’s coffin had more primo position:

Our not-British favourite: Holy Roman Emperor and Spanish king Charles V. He was so determined that his funeral be conducted just right, he conducted an elaborate dress rehearsal: “Accordingly, he made monks carry black candles and say masses for the souls of his family and, finally, himself, while he himself laid down under a shroud and listened.” He died promptly the very next day.

Beating the Brits hollow: We all obsess over the Windsors, but other royal families stage far more jaw-dropping spectacles at funerals. For example: The last rites of the Bali king Tjokorda Gde Agung Suyasa in 2008—which ended in a spectacular cremation consuming an ornate sarcophagus atop a 28-metre tower:

And King Rama IX of Thailand had the most dazzling funeral pyre—an ornate structure constructed just for the ceremony. 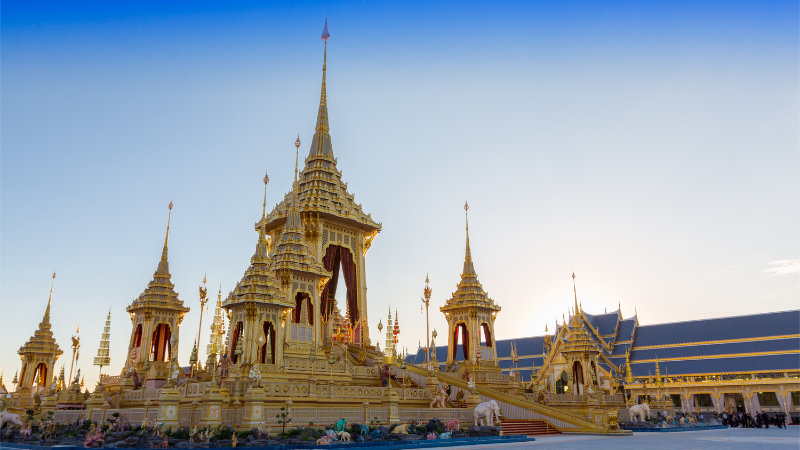 The bottomline: Bloomberg News declares, “Royalty is the biggest British brand, bigger than James Bond, bigger than the Bard, bigger even than the Beatles.” Yeah, but they’ve also gotten a whole lot more boring. Bring back the crazies, we say!

Do you really need one for this Big Story? We think not:)