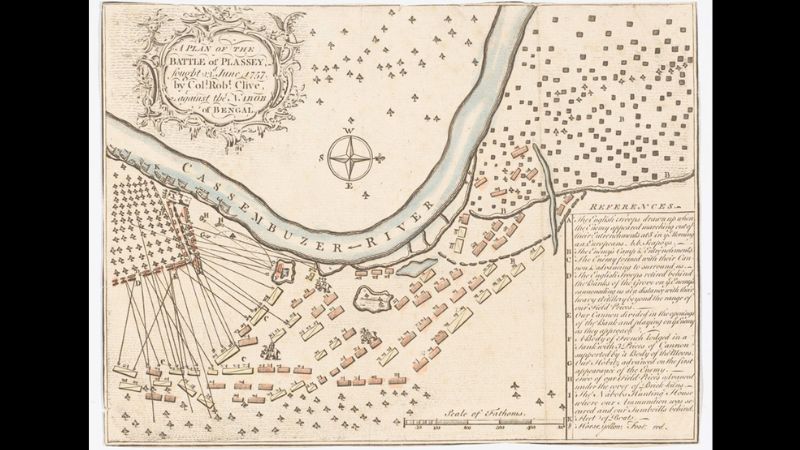 Above is the plan for the Battle of Plassey (Source: National Army Museum, London). It was produced for the London magazine in 1760 to show the advancement of British troops in the battle by horses (yellow) and by foot (red). The battle was a watershed moment in Indian history, marking the first major victory of the East India Company. On June 23 1757, the decisive British victory against the combined forces of Siraj ud-Daulah and the French East India Company established their supremacy in Bengal.

The history of the 11-hour battle is the stuff of polarising debate. While Indians hail Siraj ud-Daulah as a hero fighting against colonial oppression, the victor’s point of view justifies Robert Clive’s actions as a legitimate reaction to imprisonment of British officials in the ‘Black Hole of Calcutta’.

As always, in history, it is not always easy to assign labels of ‘good’ or ‘bad’. Each side offers a different story, which when woven together offers a glimpse of a messy past. Have you ever wondered which side of history you’d be on? Would you be in cahoots with the Company Camp? Or would you stand with the new Nawab? The answer may seem obvious. But if you take this Heritage Lab personality quiz—with five seemingly random questions—the results may surprise you.

Disclaimer: This is meant as a fun activity—so please don’t take the results to heart;)

A special bonus: The story of the Battle, in 11 paintings from museums