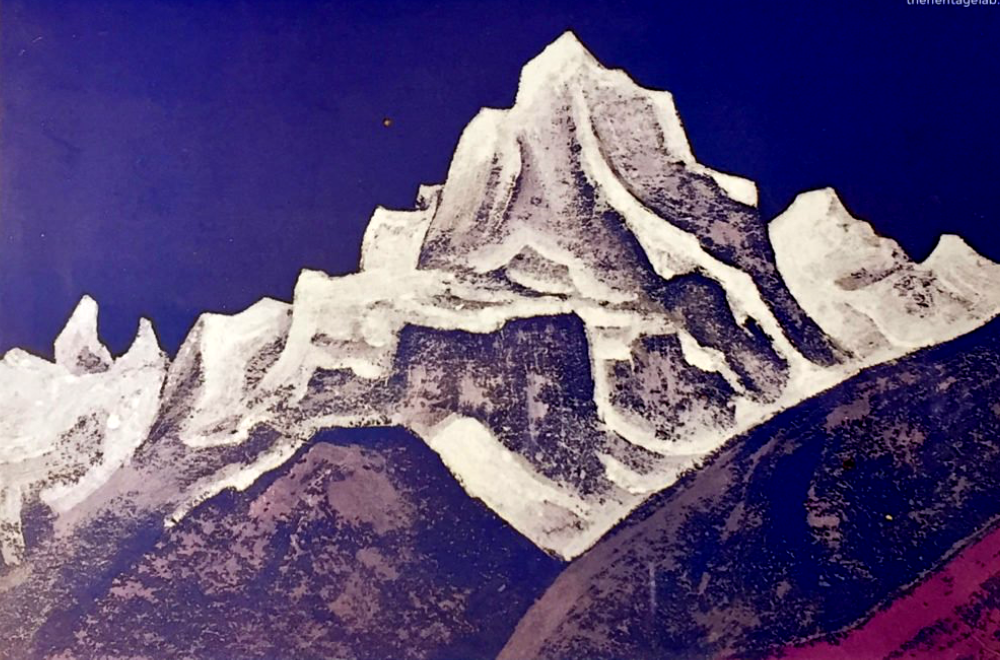 Meet Nicholas Roerich—a Russian painter who came to India in search of a magic kingdom—but discovered the greater magic of the Himalayas. The mountains have never been this beautiful.


Between Kullu and Manali, lies the quaint town of Naggar—the erstwhile capital of the Kullu kingdom—often overlooked by those travelling to the more popular destinations in Himachal. This town was once home to Nicholas Roerich, the only non-Indian to be counted amongst the 9 national treasure artists.

Note: The recognition as a treasure artist means that the works of these artists cannot be exported / taken out of the country because of their artistic value and significance.

In the early 1900s, Roerich developed an interest in Eastern philosophy and spirituality (which were gaining popularity in the West). In the 1920s, convinced of the existence of Shambhala—a mythical kingdom—Roerich arrived in India on a quest to discover a new destiny for humanity. The promised land, mentioned in Buddhist texts, was said to be situated somewhere in the Himalayas, and was a place of everlasting peace and tranquillity, inhabited by the enlightened.

Shambhala, was not to be found on any map and so the Roerichs—Nicholas, his wife Helena, and sons George and Svyetoslav—travelled across 25,000 kilometres of uncharted road to find the kingdom.

This expedition began in Darjeeling, and inspired Roerich to create over 500 paintings that not only depicted the mountain-landscape and awe-inspiring ranges—but also monasteries, monks, and local architecture and styles of buildings. Many of these paintings were made using powdered mineral rocks sourced from the region. This gave his works a matte-finish and heightened their luminosity!

Did you know? The Kinnar Kailash range (featured in the lead image above) changes colour at different points of time in the day! Spending a whole day from sunrise to sunset, you can spot up to 28 different colours!

Roerich also documented the flora and fauna, and folklores of the different Himalayan regions while conducting archaeological and ethnographic investigations in unexplored areas. He even wrote books during this time, detailing his observations. Below is the Sissu Waterfall—a little off the Leh-Manali highway and one of the region’s most picturesque sights. 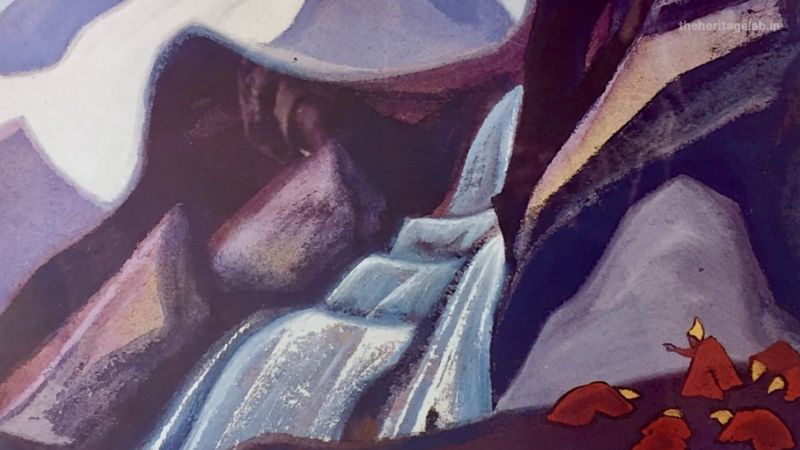 Travelling from Srinagar to Leh, you also get to see this spectacular Maitreya Buddha overlooking the old trade route near Mulbekh Monastery! (Credit: Roerich Museum, Russia) 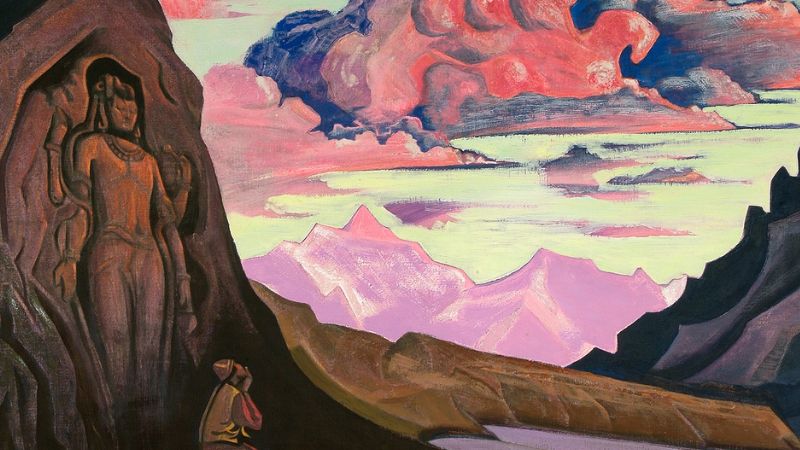 The mountains were a source of boundless inspiration for Roerich. Over time, he created 2,000 paintings dedicated to the Himalayas. In these, you’d notice that nature dominates the presence of man. Do you also see how in each of the paintings, the sun is invisible and yet part of the painting?

Roerich’s paintings are known for the use of light, tone, and the hues. It is said that Yuri Gagarin, on seeing Earth from Space wrote in his log book: “Indescribable range of colours! Like on the canvases of painter Nicholas Roerich.” 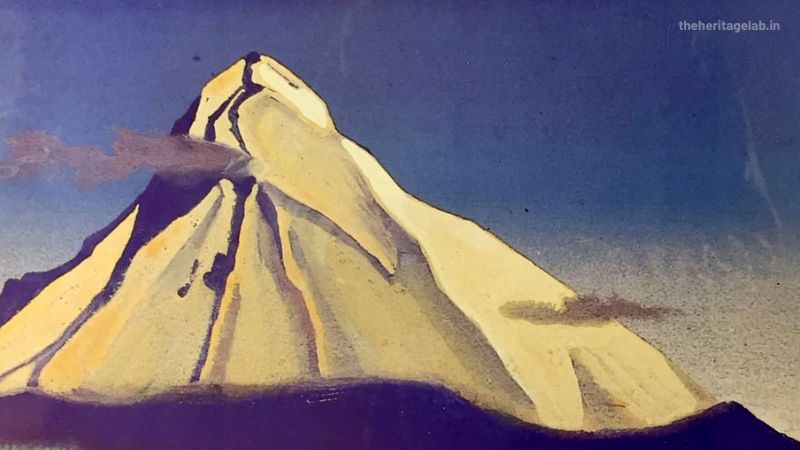 After travelling across the mountains for decades, the Roerich family settled at Naggar in 1928. By this time, Roerich was already one of the most influential men of his times.

In Naggar, Roerich developed the first international treaty for safeguarding culture during war time. The treaty was supported by prominent individuals including Albert Einstein and Rabindranath Tagore. Around forty nations signed on and it was promoted enthusiastically by US President Franklin Roosevelt. Roerich was nominated for the Nobel Prize for Peace (several times) for this effort. Below you can see a painting in the Roerich gallery that features his ‘Banner of Peace’—with the three red spheres surrounded by a red circle symbolising the past, present and future. 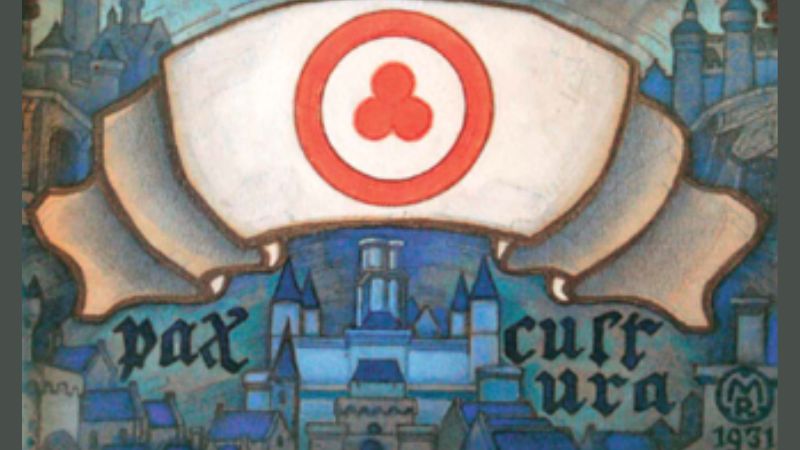 If you take a holiday to Kullu-Manali, don’t forget to make a stopover at this gallery-museum! You can also find Roerich’s works on display at: