Just deserts for a Kerala judge

S Krishna Kumar made headlines when he granted bail to an activist charged with sexual harassment. He declared the allegations were unlikely to be proven since the complainant was wearing “sexually provocative” clothes—and it “is highly unbelievable that he will touch the body of the victim fully knowing that she is member of the scheduled caste.” He has now been transferred—and the Kerala High Court has stayed the bail order. (Indian Express)

Also punished: The three Air Force officers who accidentally fired an unarmed Brahmos missile into Pakistan in March (we explained it here). They have been sacked for violating Standard Operating Procedures. (Al Jazeera)

Covid variants: Here’s some good news about the new avatars of the coronavirus. With each variant, the interval between exposure to the virus and the development of symptoms seems to be narrowing. It has fallen from an average of five days with an alpha variant to 3.42 days with omicron. Why this is a good thing:

“The longer a virus can replicate inside a person before causing symptoms, the harder it can be to stop because of the greater potential for the infected to unknowingly spread it far and wide. Among Covid-19’s pernicious features, its incubation period is longer than many other respiratory viral infections, including influenza, respiratory syncytial virus and rhinovirus.”

Sex ratio: A new Pew study also has some very good news for India. The sex ratio has improved in Punjab and Haryana—which are notorious for the number of female foeticides. The ratio—expressed in terms of the number of males born for every 100 females—has fallen to 111 in Punjab and 112 in Haryana—down from 127 in 2001. The overall national ratio has fallen from 110 to 108. One likely reason: “a notable decline in ‘son preference’ across India, particularly among Sikhs.” The Print has lots more details.

Germany has inaugurated a railway line powered entirely by hydrogen. This “world premiere” of 14 trains has replaced diesel locomotives on the 100 kms of railway track connecting five cities. How they work:

“Billed as a ‘zero emission’ mode of transport, the trains mix hydrogen on board with oxygen present in the ambient air, thanks to a fuel cell installed in the roof. This produces the electricity needed to pull the train.”

The net gain to the environment: the trains will prevent 4,400 tonnes of CO2 from being released into the atmosphere each year. (Al Jazeera)

“The rule, issued by the California Air Resources Board, will require that all new cars sold in the state by 2035 be free of greenhouse gas emissions like carbon dioxide. The rule also sets interim targets, requiring that 35 percent of new passenger vehicles sold by 2026 produce zero emissions. That requirement climbs to 68 percent by 2030.”

Why this is a big deal: California is the largest auto market in the United States—and more than a dozen other states typically follow its lead when setting their own emissions standards. (New York Times)

Also good for the environment: Eating insects. New research has found that cooking mealworms—a type of beetle larvae—with sugar can impart a meaty flavour to dishes. They can offer a tasty and far more eco-friendly source of protein—than cows, pigs and sheep which require larger amounts of food, water and land resources. And sneaking them as seasonings into easy-to-cook products may be the smart way to overcome squeamishness about eating bugs. Also read: The Wire looks at what sustainable meat consumption looks like—or listen to Sandip Roy’s podcast episode that offers a deep dive into eating insects. (Phys.org)

Even a small loss of sleep makes people less nicer to others:

“Even just an hour of sleep loss was more than enough to influence the choice to help another…When people lose one hour of sleep, there's a clear hit on our innate human kindness and our motivation to help other people in need.”

The reason: sleep deprivation affects areas of our brain associated with “the ability to consider other people's needs, states and emotions.” Interestingly, the research found a 10% drop in donations when the clocks are set forward for Daylight Savings Time. (CNN)

A bizarre malfunction on Wednesday filled user feeds with endless posts from celebrity accounts—spamming everyone’s news feed. Thanks to a bug, if anyone posted a comment on a celebrity’s page, it was being pushed into the feed of anyone who follows that celebrity. The Meta spokesperson blamed it on an unspecified “configuration change.” All of which led to this kind of minor drama:

“Users were quick to take advantage of the bug and to send memes to celebrities that they knew would be shared far and wide. One widely shared image I saw on my own feed features a picture of a turkey sandwich with the caption, ‘If you see this share it to another celebrities Facebook page keep the turkey sandwich moving.’ It seems everyone that follows that celebrity then saw the image in their feed.”

The disappearance of ‘Avatar’

Disney+ has pulled James Cameron’s 2009 sci-fi epic off its platform—so it can be re-released in theatres on September 23. This will be a remastered 4K version. This is to pave the way for the highly-anticipated sequel ‘Avatar: The Way of Water’ that is slated for release on December 16—and a way to squeeze as much money out of the movie, of course. Such is the Disney way. See the new poster below. (Variety) 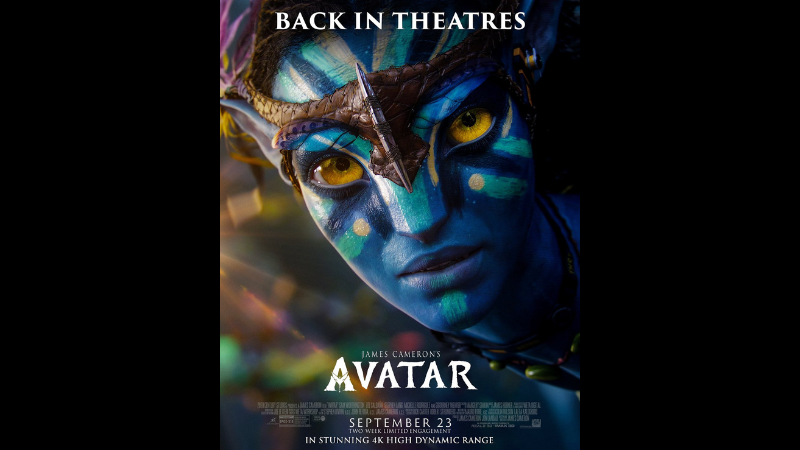 One:  How do we explain this ‘only in 2022’ story? Once upon a time a white guy and his Asian buddy decided to create a Black ‘AI rapper’ named FN Meka. How it worked: “FN Meka’s songs are performed by a human—an anonymous Black man…but the music and lyrics are generated by an AI that analyses popular music.” Umm, except the lyrics include the N-word and FN Meka is pretty much every cliche of a Black rapper rolled into one. Unsurprisingly, he has now been cancelled thanks to all the outrage. The big record label Capitol Records ended its contract—which was signed just 10 days ago, touting him as “the world’s first AR artist to sign with a major label.” (The Guardian)