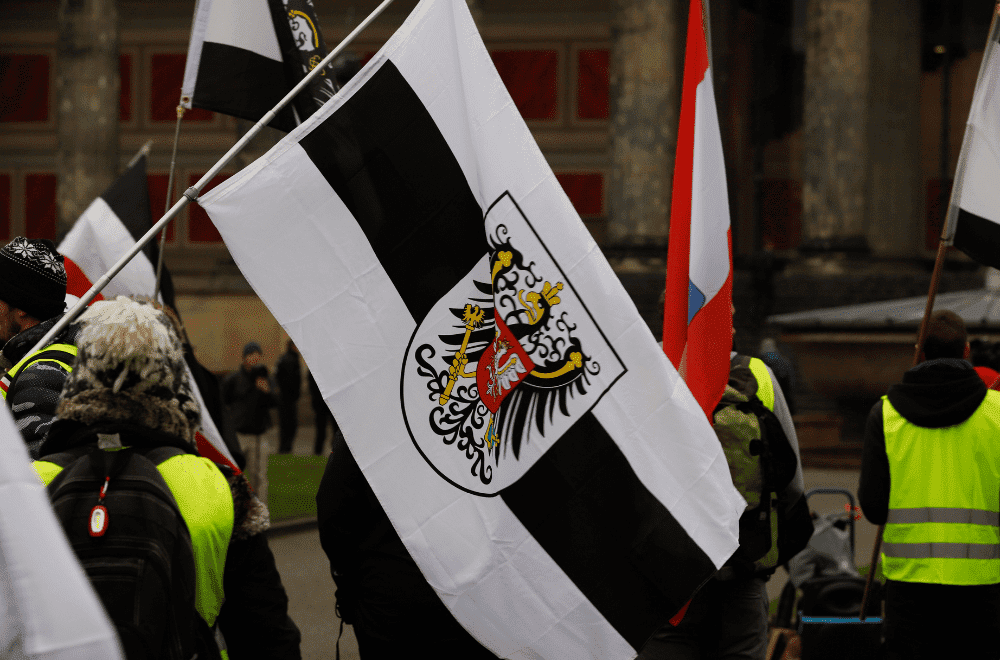 The man who would be Germany’s king

On December 7, German security forces arrested 25 people for plotting to overthrow the government—and installing a minor princeling as king. Unlike the violent rag-tag crowd that stormed the US Capitol Hill, this rightwing group was well-funded and armed—and included an A-list membership. We ask: WTF is happening in Germany?

Remind me about these raids…

The big sweep: On December 7, law enforcement agencies undertook the biggest antiterror operation in modern German history. Over 3,000 officers conducted raids in 11 German states—as well as an upscale Austrian ski resort town and Perugia, Italy. They arrested 25 members of a yet unnamed group—who are closely associated with the extremist Reichsbürger movement—which literally means ‘citizens of the Reich’. In total, 52 men and women stand accused of plotting to overthrow the government.

Who was arrested: The leaders come from diverse backgrounds—and are well-educated and connected. According to Der Spiegel:

It [the group] includes several former members of the German military's Special Forces Command (KSK), an active elite soldier, a police officer who had been suspended from duty, a judge who had been a member of the federal parliament with the far-right Alternative for Germany party for four years, a pilot, a lawyer who holds a doctorate degree, a top chef, a tenor singer, an entrepreneur and a doctor—a surprising number of people from the upper echelons of society.

The most prominent among them is a minor prince Heinrich XIII Prince Reusthe—slated to head the regime. We have more about him below. But here’s the biggest revelation:

“Even if Reich citizens or conspiracy ideologues seem like crazy people, many of those arrested come from the middle of society, have normal jobs, friends and so on.”

What the raids uncovered: The group was well-armed and seemingly well-funded. Weapons were discovered in 50 of the 150 buildings targeted. These included nine-millimetre pistols, swords, knives, stun guns, combat helmets, night vision goggles and police service weapons. The police also seized 130,000 euros in cash and several kilograms of silver and gold.

Ties to the military: Rüdiger von Pescatore was the commander of an elite paratrooper battalion. In the 1990s, he was kicked out of the military for diverting weapons—including 165 functioning pistols and rifles, of which only 11 have been recovered. Pescatore was also actively recruiting members of the military and police. Other leaders include serving military officers—who smuggled the group into military barracks to vet their suitability for housing their troops after the coup. In May, the police identified 327 individuals with far-right extremist views in the police, military and intelligence services over a three-year period.

The big plan: The group spent a year planning for ‘Day X’—when they planned to enter the parliament building—the Reichstag—and arrest MPs. “Homeland security” companies would seize control of the country—and a shadow government (including ministers) was in place to take over Germany. They also planned to execute Chancellor Olaf Scholz. Of course, much of this assumed that Germans would rise in their support:

According to investigators, some of the conspirators hoped that the action would spark unrest throughout the country and eventually lead to a coup. An interim government was to be formed, headed by Prince Reuss. "We're going to crush them, the fun is over!" he allegedly said in a call that the authorities were listening in on.

OTOH, the group had made similar plans twice in the past—and never followed through.

So are these people Nazis, then?

Not exactly. The broader Reichsbürger movement is a loose alliance that was brought together by the pandemic—when fierce resistance to vaccines and Covid controls unleashed various rightwing elements:

Radical circles that had long marched separately also came together on the streets. They included right-wing extremists, the Reichsbürger, followers of the anti-Muslim group PEGIDA, fans of the [nationalist party] AfD, New Age esoterics and opponents of vaccination. In the end, it barely mattered whether it was against the anti-corona measures, the government's position in the Ukraine war or the skyrocketing prices. What united them is their hatred of "the people at the top."

Several months ago, one of these groups—not part of this cabal—made plans to kidnap the health minister, for example. Rallies during the pandemic railed against government ministers, calling them crazy or "just mercenaries" waging economic war against the German people.

The Reichsbürger worldview: Its adherents believe that there has never been a legitimate government in Germany since the fall of the monarchy. And occupying Western allies—the US, UK etc—installed a puppet regime which remains in control to this day. The Federal Republic of Germany is really “a limited-liability company based in Frankfurt and controlled by a Jewish world government based in America.” They often refer to it as Deutschland GmbH (Limited) or BRD GmbH. And since it is just a company, citizens are not obliged to pay taxes or follow its laws.

They want to reinstate the constitutional monarchy of Kaiser Wilhelm II of the pre-World War I era. According to experts, much of this is a yearning to erase the humiliating defeats of the two world wars—and return to the age of imperial glory.

Say hello to Prince Reuss: So it makes perfect sense that their leader is a minor princeling—also resentful at the loss of his family’s wealth and status. Heinrich XIII is a 71-year-old member of the House of Reuss—which ruled parts of central Germany until 1918. He is currently a real estate broker whose only sign of royal privilege is a hunting lodge—a small neo-Gothic castle near the town of Bad Lobenstein. Heinrich’s wacky worldview is not exactly a secret:

In the 15-minute speech, he railed against the Rothschild family and claimed World War I was forced on the German kaiser by international financial interests—both common antisemitic dog whistles—insisting that modern democratic Germany was just an illusion.

That loony talk makes him the ideal candidate to lead the Reichsbürger movement: “The new head of state has to be some kind of prince, has to be some sort of person with an aristocratic line.”

Ironic point to note: The actual head of the Reuss family has called him “a confused old man” and pointed out that he is only 17th in line for the throne: “That means 16 of us would have to die before it is his turn.”

So should we be worried about these people?

A number of leading Western countries have seen a powerful resurgence of the extreme right—fueled by bizarre conspiracy theories that are easy to dismiss as crazy. But it isn’t an accident that the extreme right in the US and Germany are increasingly tied together with a paranoid worldview—where almost any delusion passes for fact. The Reichsbürger movement often reflects QAnon mythology—and, in turn, QAnon often posts in German on Telegram. They offer comfort at a time of great uncertainty:

[T]he belief in all-encompassing conspiracy narratives… has more to do with a person's own identity and psychological phenomena, with a general distrust of "powerful people" such as politicians or scientists, for example. That, she says, can lead to the conviction that everything bad that happens in society is the result of secret planning… Crises act as catalysts for a fundamental critique of the system. "What is decisive for the success of the conspiracy theory is not its truth content, but its potential to plausibly resolve contradictions,” neuroscientist and psychiatrist Philipp Sterzer writes in his book ‘The Illusion of Reason’.

The bottomline: No one expects a coup d’etat to be successful in Germany. But the extreme polarisation and anger isn’t going away—no matter how many leaders the police arrest. That stealthy virus may do far more damage in the long run than a failed insurrection.

Der Spiegel has the best deep dive on the subject—including detailed profiles of the ringleaders. For more on the prince who would be king, read the New York Times and NBC News. Vox and The Conversation have more on the Reichsbürger movement—while The Hindu offers a good explainer.