Each day brings a new FIR. This time, the National Commission for Protection of Child Rights has filed a complaint that child pornography and “highly obscene content” is being shared on the platform. The company has been charged under the POCSO and IT Acts. The complaint claims:

Also a problem: Twitter does not report such cases to authorities in India, but instead to a US-based agency—which is against Indian law. (Indian Express)

Serena drops out of Wimbledon

The seven-time Wimbledon champ was forced to quit her first round match against Aliaksandra Sasnovich due to injury. She arrived at the match with her thigh heavily strapped—and then slipped twice in the fifth and seventh games. And she exited in tears soon after. BBC News has more details. See her slip and break down on the court below:

A horrific building collapse in Miami

Last week, a 13-storey, 135-unit beachfront condominium suddenly collapsed in what is being described as “one of the deadliest accidental building collapses in American history.” But the full measure of the tragedy continues to unfold. Despite frantic rescue efforts, 150 people are still missing—and 12 are confirmed dead. Hopes of finding anyone alive are fading fast.

It is extremely rare for buildings to suddenly fall apart. While the cause is still unknown, there is evidence of underlying structural damage—with the president of the RWA warning that it had become “significantly worse” since the last inspection in 2018. New York Times has the best explainer. Watch the building collapse below.

Jacob Zuma is in big trouble

The former South African president has been sentenced to 15 months in jail by the country’s Supreme Court. The reason: Under investigation for corruption during his tenure, Zuma repeatedly refused to present himself in court—and he went on to brazenly defy the summons to appear before an enquiry panel in February. He has five days to surrender himself. (BBC News)

The city in Pakistan has always been famous for its scorching temperatures. But new research shows that it is now one of the two locations in the world that have “officially passed, albeit briefly, a threshold hotter than the human body can withstand.” The other hotspot: Ras al Khaimah in the UAE. But here’s the important difference:

“In the wealthy UAE, where electricity and air conditioning are plentiful, the threshold may have little effect on residents. In Jacobabad, where many subsist on wages of only a couple of pounds a day, residents must find other ways to adapt.”

Also this: “The Indus Valley is arguably close to being the number one spot worldwide… When you look at some of the things to worry about, from water security to extreme heat, it's really the epicentre.” (Telegraph UK)

In other environmental bad news: In May, a cargo ship caught fire off the coast of Colombo, and leached toxic chemicals into the waters (explained here). The disastrous consequences of “the worst environmental disaster for Sri Lanka” are now becoming painfully clear—as dead animals including dolphins, turtles and a blue whale—some with reported burn marks—wash up on the beaches. Despite the obvious cause, the Sri Lankan government is only “provisionally” linking the phenomenon to the ship. Watch a heartbreaking report on dead sea turtles below. Washington Post has more details.

In a new paper, an unusual group of seventeen leading experts from various fields argue that the study of technology’s large-scale impact on society should be a “crisis discipline”—much like climate change research:

“The paper argues that our lack of understanding about the collective behavioral effects of new technology is a danger to democracy and scientific progress… The authors warn that if left misunderstood and unchecked, we could see unintended consequences of new technology contributing to phenomena such as ‘election tampering, disease, violent extremism, famine, racism, and war.’”

Vox has a thought-provoking interview with one of the authors.

Snake vs spider: Guess the winner!

A new study has revealed an astonishing fact: A variety of species of spiders around the world routinely kill and eat snakes. Even more surprisingly, the most lethal killer isn’t a big guy like the tarantula:

“In most cases, these itsy-bitsy spiders build extremely tough webs, which often extend to the ground and ensnare unsuspecting snakes. Once caught, the spider delivers its venomous bite to paralyze its victim, wraps the snake in silk, and hauls it aloft to dine. Digestive enzymes in the spider’s bite liquefy the snake’s soft parts, just as they would with a fly. The spider then takes its time slurping up the insides, with some meals stretching out days and even weeks.”

National Geographic has more. And you can watch a redback spider in action here.

Florence Fang bought a home in the posh Bay Area suburb of Hillsborough and gave it a full makeover. The result: A very colourful and odd house with a Flintstones theme, dinosaurs included! She said: “I wanted to decorate with the past and the future combined together in harmony. I call that ‘over the rainbow’.” Town residents were furious at the “eyesore,” but a defiant Fang counter-sued. Two sides settled their differences, and yes this marvelous creation below is here to stay. If you want the full tour, check out this video. (The Guardian) 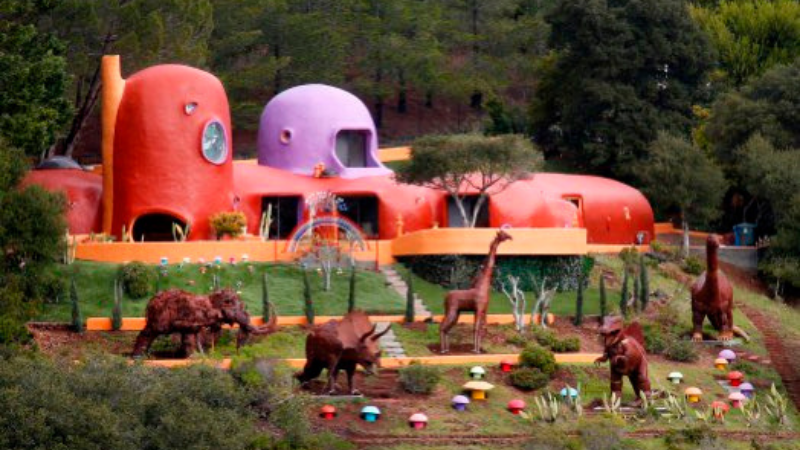 Not so lucky: Goa’s iconic Club Tito’s—which has been shut down and sold with the current owner alleging harassment by local authorities as a reason for his decision. In a Facebook post, Ricardo D’Souza wrote:

“It is with sadness but with anger that we have sold our entire business in Goa.  I personally have suffered the least as I was compensated adequately and even my future generations won't have to work. I will also share some with our staff, but in the long term they now have no jobs. Can I please ask our officials to employ them as I do not ever plan any more business in Goa. By ‘officials’ I mean all the harassing lot, like police, pda, crz, ngos, panchayat n sarpanchas (not Shawn Martins), bdo, dy collectors.”

Don’t know why this is a big deal for local residents? Read this older profile of this famous party destination in Hindu Business Line.

In far happier news: Municipal authorities in Delhi have opened the first toilet complex for transgender residents. This is in keeping with the Delhi government’s February order instructing all its departments, offices, district authorities, municipal corporations and Delhi Police to create separate washroom facilities. This is, however, only a pilot project. As one activist notes, “One toilet in a city as big as Delhi is only a token but it is still a ray of hope.” (Times of India)

On Tuesday, we carried an item on Kumar Eswaran who reportedly has solved the Riemann Hypothesis—a mathematical problem that has remained unsolved for 161 years. Subscriber Vishal Jain wrote in to flag questions raised about Eswaran’s claim on Reddit. We thought you may find it interesting.

Dine With Data: All About Humit 🎹

About: Music sharing is broken. Copying links from Spotify and DMing your friends can't be the ideal way.

Humit is a social-first music app that helps you discover music from your friends and other like-minded people. One can share the exact moment of a song to the feed, or reshare the entire track itself. Its goal is to shift listeners away from algorithmic recommendations. 🎧

The company announced a pre-seed raise of an undisclosed amount from Antler and other angels this week.

Food For Thought: Humit's long-game is to build a music-first social profile for you. We often bond with people over our music tastes, and even use them to impress others. Humit wants to be the online platform for that. Time for music influencers that tell us what to listen to?

DWD Take: Humit's premise is incredibly strong, and consumer preferences for music have always been influenced by their social circle. Building the social layer for music seems like an obvious start, and we're hoping that their execution takes them all the way!

About DWD: Dine With Data🍴sends you a short summary of one new startup every day, delivered straight to your WhatsApp inbox!