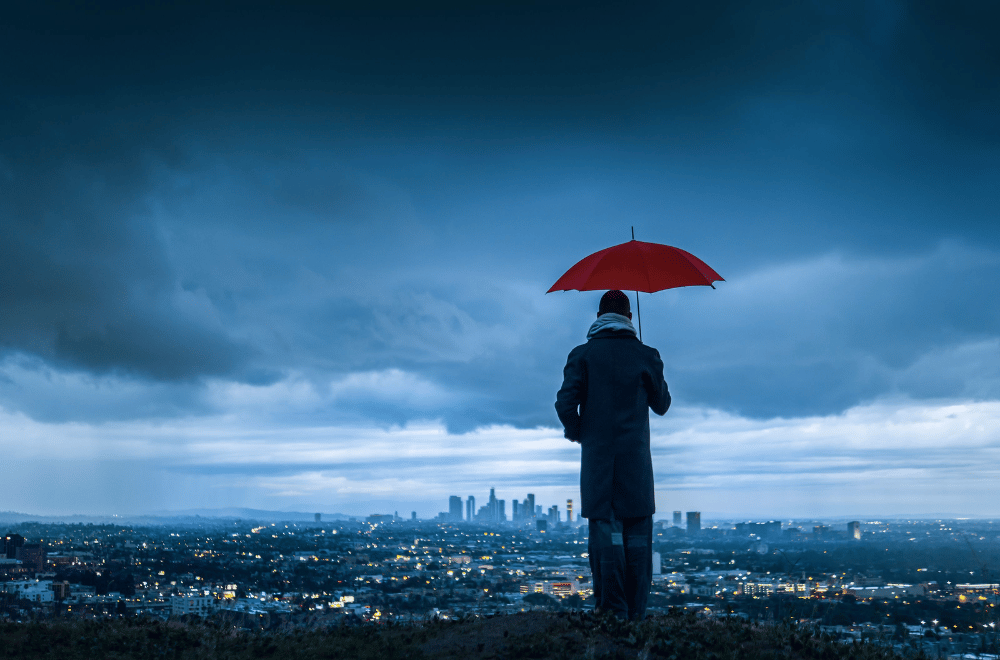 Devastating floods in California have drawn attention to a little known weather phenomenon called ‘atmospheric rivers’—which also cause ‘bomb cyclones’. Yeah, they’re every bit as bad as they sound.

A quick recap of the floods

Somethings to see: Here’s a map showing you how much rain the Californian coast has received in the last 14 days: 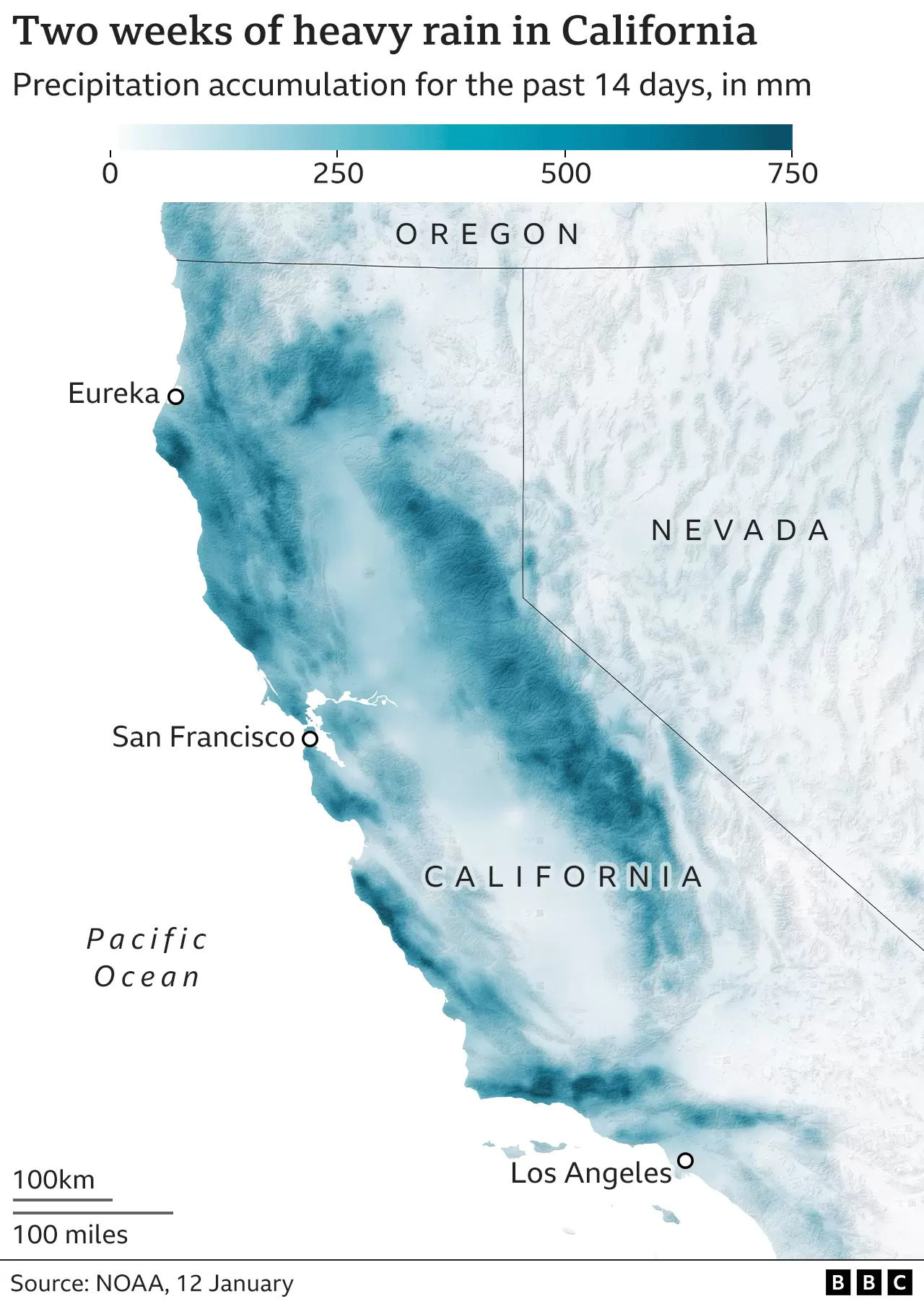 The fabulously rich were not spared the effects of the storms. The A-list residents of Montecito—including Harry & Meg, Oprah Winfrey and Ellen DeGeneres—were ordered to evacuate. Here’s the vid shared by Ellen of the area around her home:

They were still luckier than the residents of the town of Gilroy—ended up underwater:

And all this was caused by 'rivers'? Really?

Atmospheric rivers—as in rivers in the sky, not on land. These flowing columns of water vapour extend from the tropics to the higher latitudes—and are usually 250-375 miles wide. These rivers carry 90% of the water vapour moving toward the poles—but only cover 10% of the planet’s circumference. The rivers bring rain and snow when they hit land—when the water vapour cools over mountainous areas. They carry 15 times the volume of the Mississippi River. Below is a satellite image of atmospheric rivers over the Pacific Ocean back in 2012:

Key point to note: These rivers are essential to the water supply in places like the West Coast—which relies on moisture brought in by an atmospheric river nicknamed the Pineapple Express. It begins in Hawaii—where warm temperatures evaporate ocean waters into the atmosphere—and is carried by winds to the California coast. It typically brings winter rains to the state—which gets up to 50% of its annual rain and snowfall from these rivers. See NASA’s satellite image of the Pineapple Express below: 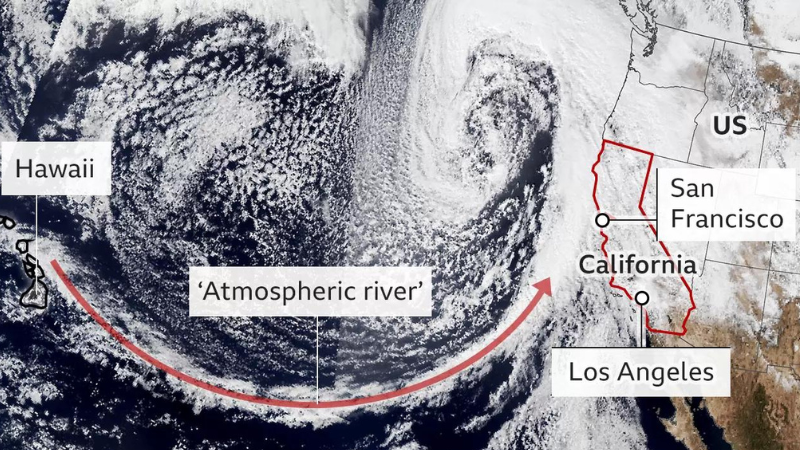 What went wrong: Frequency. California was walloped by back-to-back atmospheric rivers—delivering torrential amounts of rain. It experienced the eighth over the weekend—and one more is anticipated this week. As a climate scientist explains: “It’s definitely too much of a good thing… It’s often true that we’ll get one, and then a few weeks later we might get another one, and a few weeks after that we might get another one.” What is unusual is “the persistence and the intensity” of the storms.

Also, bomb cyclones:  These are associated with atmospheric rivers—and here’s how they form:

Storms can form when a mass of low-pressure air meets a high-pressure mass. The air flows from high pressure to low, creating winds. What defines a bomb cyclone is how rapidly the pressure drops in the low-pressure mass — by at least 24 millibars in 24 hours. This quickly increases the pressure difference, or gradient, between the two air masses, making the winds stronger. This process of rapid intensification has a name: bombogenesis.

Yes, ‘bombogenesis’ is indeed a real word. Atmospheric rivers can supercharge these cyclones—making them more powerful and devastating.

Not helping matters: The megadrought that has affected the Southwest for the past few years: "If you have very dry soil and it's raining, then of course the water cannot be absorbed as quickly, and usually that amplifies flooding.” And wildfires triggered by the dry heat have destroyed tree cover—making the state more vulnerable to landslides due to torrential rain.

Irony alert: All this flooding may not end the drought, either. Extreme winter rainfall in California has been historically followed by an unusually hot spring—which quickly dries the excess water. Atmospheric rivers are also delivering less snow and more rain. The rain also melts the snow—which feeds the floods. This is not good news for a state that relies on melting snow packs to feed its reservoirs in the summer.

Of course. Like much of the world, California is yo-yoing between extremes–droughts and floods–due to rising temperatures:

California has always had something of a “boom-or-bust hydrological economy”... but the booms are getting even wetter and the busts even drier. As the atmosphere warms, it’s able to hold more and more moisture—this is why hand-dryers blow warm air, to maximise the amount of moisture that air can wick off your skin—and atmospheric rivers grow wetter and wetter. When they make landfall and deposit that moisture in the form of precipitation, the resulting storms are more intense.

Climate change will make atmospheric rivers grow 25% longer and 25% wider—and therefore far wetter, able to carry more water vapour. The atmosphere can hold about 7% more water for every 1°C increase in temperature. Thanks to a warming planet, atmospheric rivers have already produced about 11-15% more rain. In the even hotter world projected by the end of this century, that number will jump to 40%.

Also this: Every degree of warming will roughly cause an additional $1 billion worth of flood damage—and that just on the western coast of the United States.

The bottomline: is best summed by this observation in The Atlantic:

California’s current plight can feel in more than one way like a very dark punch line to a not-very-funny joke. What do you get after a summer of respite from deadly wildfires? A winter of catastrophic flooding. And what do you get after years of desperation for water? So much rain that you’ll pray it will stop.

But it’s not just California. All of us will be on the receiving end of that cruel joke—sooner rather than later.