A very happy new year to all of you! May 2023 be truly epic in the best way possible. We’re getting off to a running start with our app—which will be rolled out around mid-January. So please be patient:) And we will be rolling out a user survey soon after so you can tell us exactly what you think of the new design!

A big Covid surge in China

While the government isn’t revealing much, a leading Shanghai doctor—and member of the official Covid advisory panel—claims that 70% of the city’s population has been infected. However, Chinese medical experts point out that only 3-4% of the cases are severe—and require hospitalisation. China has only reported 15 Covid deaths since it eased restrictions on December 7. Then again, according to Bloomberg News, bodies are piling up at Shanghai crematoriums. (The Independent)

Meanwhile, in India: According to the Indian SARS-CoV-2 Consortium on Genomics (INSACOG)—which tracks virus mutations—most of the cases involve the XBB version of Omicron. There has been no increase in hospitalisations or a surge in numbers—likely because Indians are now protected by herd immunity:

China has a virgin population — they have not received the natural waves of infection. Neither is their population fully vaccinated. While India has gone through three different waves of infection, China went through only one covid wave which got contained in Wuhan in 2020. And therefore, Omicron’s BF.7 has taken a bad shape in China and not in India.

A woman’s body was dragged for over an hour by a car with five men—after her scooter met with an accident with the car. The police now have a witness to the heinous crime—her friend who was riding pillion but “left the spot fearing consequences.” She blamed the car driver for the accident, saying he was “driving in a rash and zigzag manner.” The police have now added the charge of culpable homicide not amounting to murder. (The Hindu)

A Russian dies in Odisha… again!

Russians are dropping like flies in the state—which has seen three deaths over the space of two weeks. First, sausage tycoon Pavel Antov and his buddy died around Christmas (see our Big Story here). Now, the chief engineer of a cargo ship parked at Paradip port—Sergy Milyakov—has died as well. Though unlike Antov, he did not topple out of a window. The police say he suffered a heart attack but are waiting for the autopsy results. (Times of India)

All copyrights on works created in 1927 expired on January 1. This includes Arthur Conan Doyle’s short-story collection ‘The Case-Book of Sherlock Holmes’, Virginia Woolf’s ‘To The Lighthouse’ and Agatha Christie’s ‘The Big Four’. Also public property: the phrase “I scream, you scream, we all scream for ice cream.” Yup, using it without permission was a strict no-no until Sunday. So now these works can be shared, performed, used and sampled without permission or cost. (Forbes, paywall, Cheddar News)

The tennis legend announced that she has been diagnosed with throat and breast cancer—but they have been caught early at stage one and are unrelated to one another.

The 66-year-old is already a breast cancer survivor—having been first diagnosed in 2010. What Martina said:

The double whammy is serious, but fixable, and I'm hoping for a favourable outcome. It's going to stink for a while, but I'll fight with all I have got.

In other celebrity health updates: Actor Jeremy Renner is in critical but stable condition in the intensive care unit—after suffering a serious accident with a snow plough. (The Hollywood Reporter)

A juicy offer to Tokyo residents

In 2021, Japan recorded the biggest natural decline in population since 1899. And its citizens are ageing rapidly:

While the number of over-65s continues to grow, the birth rate remains stubbornly low at 1.3 children — well below the 2.1 needed to sustain the current population size.

The government is now offering $7,500 (1 million yen) per child to encourage families to move out from greater Tokyo—which is the world’s biggest metro with a population of around 35 million. It encourages the city’s residents to have babies—and move out into the sparsely populated rural areas. FYI: a similar scheme launched earlier was a dud. (The Guardian)

Solved: The mystery of the winter cold

According to a new study, the reason why we get frequent colds in the winter lies in nano-sized particles called vesicles inside the nose. They help the body fight viruses since the nose is often the first point of contact. Scientists have found these vesicles are far less effective when temperatures drop. A five-degree cooling—from 37°C to 32°C—made them 77% less effective. Of course, this isn’t the only reason why you are more likely to get a cold in winter. Wired has all the nerdy details.

After topping pretty much every ‘most played’ list in 2022, The Weeknd’s ‘Blinding Lights’ is now the all-time champion—the most streamed song in Spotify’s history. It clocked a whopping 3.332 billion streams by January 1, 2023. It dethroned Ed Sheeran’s ‘Shape of You’—which we consider an upgrade:)  (NME)

One: Egypt’s new year is off to an excellent start. The Houston Museum of Natural Sciences returned a 2,500-year-old sarcophagus to the country. It was looted from Abu Sir Necropolis, north of Cairo—and smuggled through Germany into the United States in 2008. Egypt has been working hard to bring back its treasures—having saved 5,300 stolen artefacts just in 2021. If you remember, Indian authorities are also focused on doing the same. This Deutsche Welle story from April has more on that. (Associated Press) 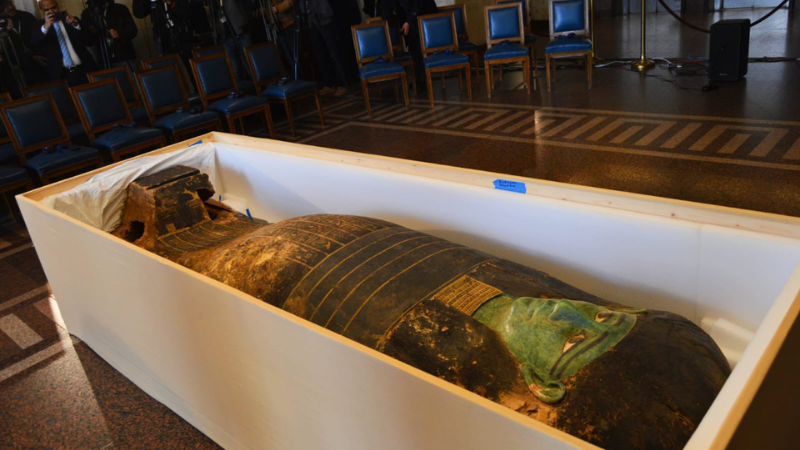 Two: Each month brings a new tell-all episode from H&M—as in Harry and Meghan. This time, it’s Harry who is doing promo interviews for his memoir ‘Spare’—which will drop on January 10. Here’s the teaser from the ITV interview that will air on January 8. Btw, he is also doing another big one with CBS’ Anderson Cooper. The real mystery: will anyone still be watching? (BBC News)

Three: This drone footage of a beach in Perth shows just how close tiger sharks came to swimmers over the holiday week. Happily, this did not turn out to be a rerun of ‘Jaws’—and no one was hurt. FYI: they may not look like much in the footage, but tiger sharks are one of the largest sea creatures. They grow to a length of 14 feet and can weigh about 635 kg. (Yahoo News)