WHO sounds alarm over monkeypox

The WHO has declared monkeypox a “public health emergency of international concern.” It has spread across 75 countries and the number of cases has grown 5X within just a month. The worldwide tally: 16,836 as of July 20. But the number of recorded deaths are only five—since it is both less infectious and lethal than Covid. Hindustan Times explains why the WHO declared a global emergency.

Meanwhile, in India: Delhi just reported its first case—the fourth in the nation. What’s notable: the patient has no history of international travel—unlike the other three cases in Kerala. This suggests that “the infection is already here within the country.” Some experts have been urging the government to declare monkeypox a sexually transmitted disease—since it appears to be spreading mainly via sexual contact within the gay community. Our Big Story has lots more details about monkeypox—and the current outbreak. (The Telegraph)

Two arrests with a political fallout

One: The Enforcement Directorate arrested Trinamool state minister Partha Chatterjee for a scam that involved hiring teachers in exchange for money—during his time as education minister in 2016. While there were plenty of rumours, no action was taken until the Calcutta High Court ordered a probe. The Trinamool party has distanced itself from Chatterjee—and promised to take action if he is found guilty. (The Hindu)

Two: In Meghalaya, a police raid on a farmhouse uncovered a brothel—whose prostitutes included five minors. It is owned by Bernard Marak, the vice-president of the BJP’s state unit. And the case has created cracks in its alliance with the National People’s Party—which leads the ruling coalition government. The BJP has strongly defended Marak, calling the raid a “planned conspiracy” to “malign” his image. (Indian Express)

Just days after inking a deal to allow Ukraine to export wheat via the Black Sea, Russia bombed one of its key ports, Odessa. While Kyiv called it an act of “barbarism,” Moscow insists that it only targeted a Ukrainian warship and a weapons store. Either way, it has dampened hopes that the agreement will help rein in global wheat prices that have been soaring since the invasion. Reminder: Ukraine is one the world’s leading suppliers of wheat. (Reuters)

Both Economic Times (paywall) and Mint (paywall) looked at admission data for the most prestigious management institutes in the country. And they found that the new IIMs have a much better gender breakdown than the old, venerable type—i.e. Kolkata, Ahmedabad, Bangalore etc. At least three out of 10 students are women in their postgraduate programs. And in places like Raipur and Rohtak, women outnumber men—accounting for more than 60% of the slots. Some of the key reasons for the difference: Lower cutoff marks and proactive diversity policies at newer schools—and more women are opting for an MBA.

Meanwhile, in Kerala: The state’s Child Rights Commission has directed all schools to go co-ed. The reason:

“There is no need to teach boys and girls in separate schools in the existing social context. Moreover, the existence of such schools can only be seen as a turning away from advanced education and psychological theories. There is no justification for such schools to exist. The government should put an end to such an unscientific practice.”

The Kerala government, however, is not keen on taking unilateral action: “This is not a High Court verdict, right? The government has to listen to stakeholders and consider their opinion as well.” (The News Minute)

Men have a biological clock too

A big study of IVF cycles shows that a man’s age also has a big impact on the chances of success. But this “significant drop” only shows up when women are between the ages of 35-40, and if their partner is 40-plus. And here’s why: “[L]aboratory results indicate that the eggs from younger females have the capacity to repair the much higher incidence of DNA damage found in the sperm of older males.” Why this matters: “For too long the burden has been on women, and the man’s contribution for the short- and long-term risks to the offspring associated with advanced paternal age have been largely ignored.” OTOH, we’re waiting for someone to argue this is exactly why older men should have babies with young women. (The Guardian)

The platform will soon allow anyone to remix images from your public account in a reel. The reason for this new feature: “The change is meant to provide more content for Reels creators to work with as the company goes all in on short-form video in the hopes of keeping up with its explosively popular competitor [TikTok].” It’s every user’s job to provide “more content” for Insta’s creators—so it can beat TikTok? Well, it’s always useful to know one’s job description even when none of us signed up for it. Yes, there will be a way to opt-out. But we don’t know exactly how. (The Verge)

In a rare TMZ-like moment, the Wall Street Journal published a detailed piece on a personal drama that broke the decades-long friendship between Elon Musk and Google founder Sergey Brin. The reason for the rift: Musk had a brief fling with Brin’s wife Nicole Shanahan. To be fair: it happened when the couple were separated but still sharing the same house. Apparently, Brin later found out and promptly sold all his Musk-related investments—even though Musk reportedly “dropped to one knee in front of Mr Brin and apologized profusely for the transgression, begging for forgiveness” at a party this year. Yeah, yeah, it's totally gossip but it's excellent goss, you must admit:) If you’re curious, here’s a splainer gift link to the WSJ piece.

One: Well, if it’s Monday, then you must obviously need a bit of hotness to cheer you up. Lo and behold—the fully (but tastefully) naked photos of Ranveer Singh for Paper magazine. Ofc, some folks are all shook up on social media… but, hey, we totally embrace every person’s right to look excellent without clothes:) See the other photos and his interview over at Paper. 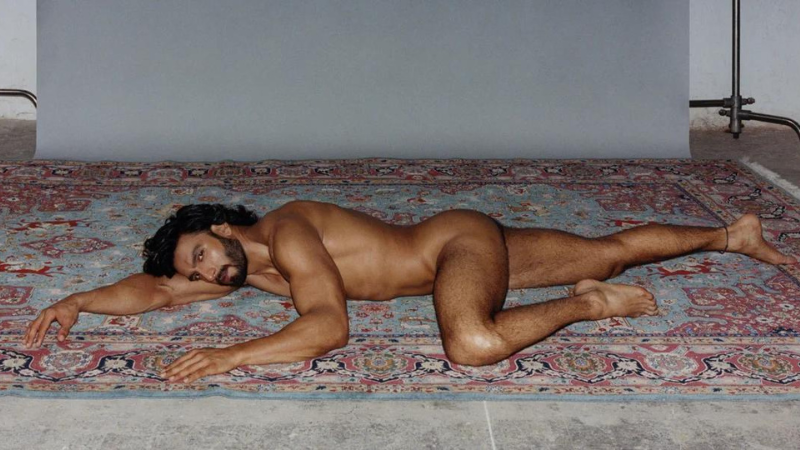 Two: A 1,500 pound (roughly 680 kg) walrus named Freya is terrorising Norwegians by flinging herself onto boats that are not exactly equipped to support her luscious curves. The official term is “walrus worthy.” Frantic authorities are now spraying her down with hoses to keep her at bay. But Freya’s bigger problem is the crowds that now gather to watch her antics—which is totally stressing her out: “She needs to relax for up to 20 hours. When she is constantly stressed out by people and their presence, it is not good for her.” You can watch Freya ravage boat seats below—without feeling guilty. (Huffington Post)

On the latest episode of the splainer podcast ‘Press Decode,’ the team discusses the great bra ban and other bizarre exam rules—and racism in wildlife conservation. Be sure to head over to the IVM website, Spotify or Apple Podcasts to listen to it.